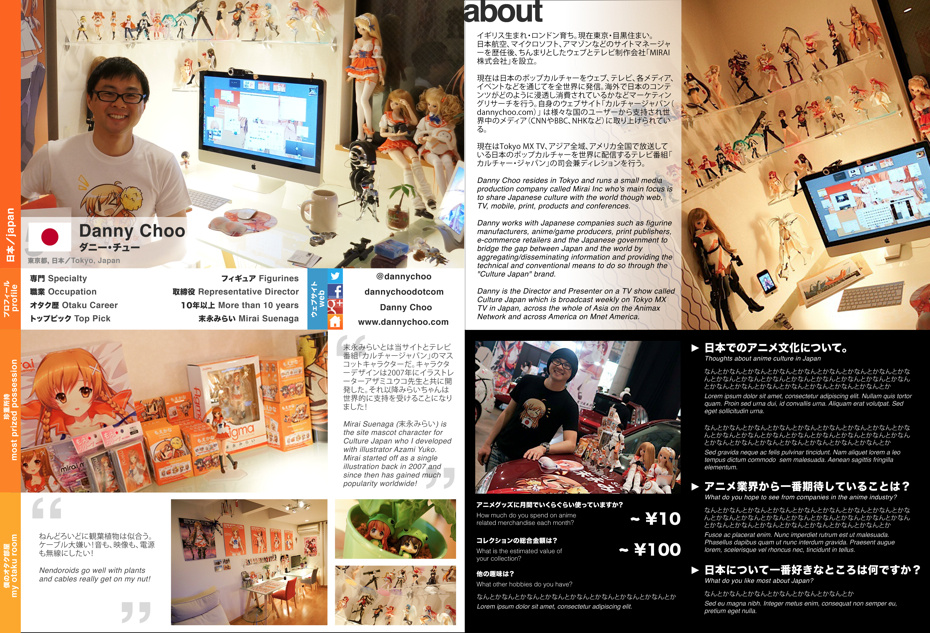 Another update!
We have had so many submissions that we have decided to include more than 1 representative from each country! But because there is a load of data that has to be translated, its taking a wee bit longer than anticipated. Are doing our best to get the book out asap.

As for all those who wrote in complaining - dont worry as your data wont be used and will make sure that it will be deleted forever!

Update! Here is a mockup of what the representative page will look like. Read on to find out how you can be part of this book - the anime industry needs you to represent your country! 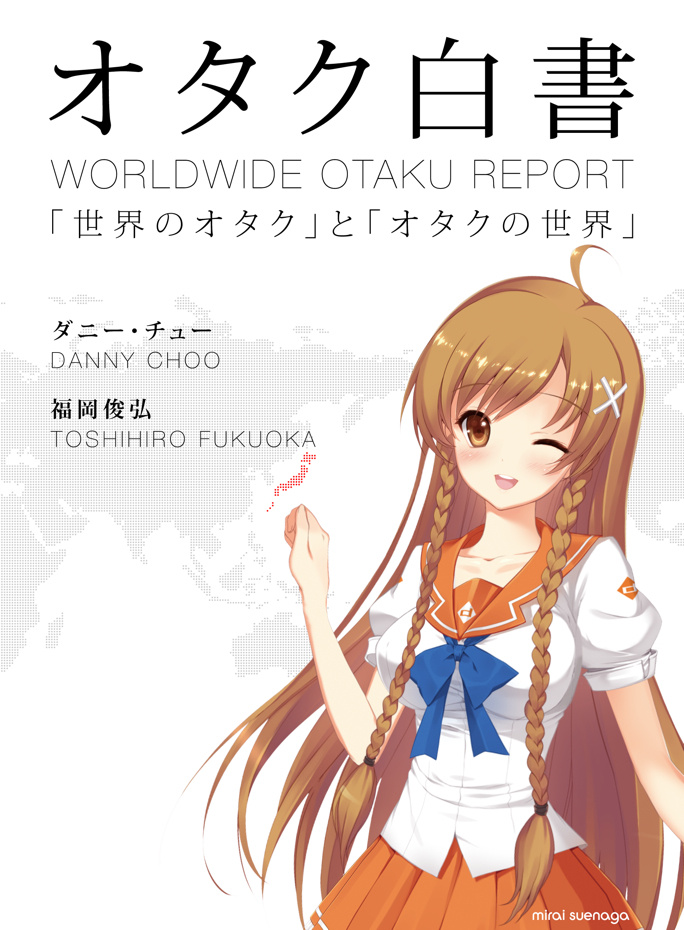 Read on if you want a chance to work in the Japanese anime business or win goodies!

Am most excited to announce that I'm working with Toshihiro Fukuoka to release a book called "The Worldwide Otaku Report" which aims to give the reader an insight into the lives of otaku worldwide who consume Japanese Pop Culture.

If you are wondering about the cover - it features my mascot character Mirai Suenaga.

As you know, I've been working with the Japanese Government to help bring Japanese Culture to the world for a while now but there is a limit to how much I can do so I thought it would make sense to involve you.

The book will be split into a few parts.

Many companies in the anime business want to reach out to countries around the world but they dont know where to start - this is where I want to introduce them to you.
The book will feature representatives from countries around the world who are well versed in the anime/otaku market in their region. Each representative will most likely become the contact point for all Japanese companies who need help in developing their products/anime titles/events/services in your region.

You will have a few pages dedicated to your hobbies, photos and other nitty gritty and SNS contact details (facebook, twitter) so that you can be contacted. I'm only giving you the opportunity and showing you the door - its up to you to walk through the door and decide what you want to do on the other side. We are not expecting anything in return - what you charge for consultation is completely up to you and we are not involved with communication between you and your new clients after the book is published.

Ah, I lied about not expecting anything in return - I would expect that you do your bit to help Japan in anyway that you can by helping out companies who want to know more about your region. And remember - its up to you whether you want to charge for your services or work with them to build your brand name.

To let you know that many folks who were in Otacool 2 became cosplay consultants and 1 person in particular even became an idol singing anime OP and ED songs in Japan.

But having said all that - I'm not guaranteeing that you will be contacted by industry folks but we will market the book in Japan in such a way so that businesses will reach out to you if they are interested in developing their products in your region. I'm guessing that some of the representatives in the book may end up with a job in the anime industry too.

The Worldwide Otaku Report will also contain a load of data collected from otaku around the world which covers everything from favorite anime to what mobile phone one is using.

Fukuoka-san and I will be writing reports on various areas of otaku culture around the world with the help of industry folks like Good Smile Company and more.

The book will contain both English and Japanese language and will be available in bookstores and convenient stores across Japan and at various outlets online too. If you want to be a part of it then read on! 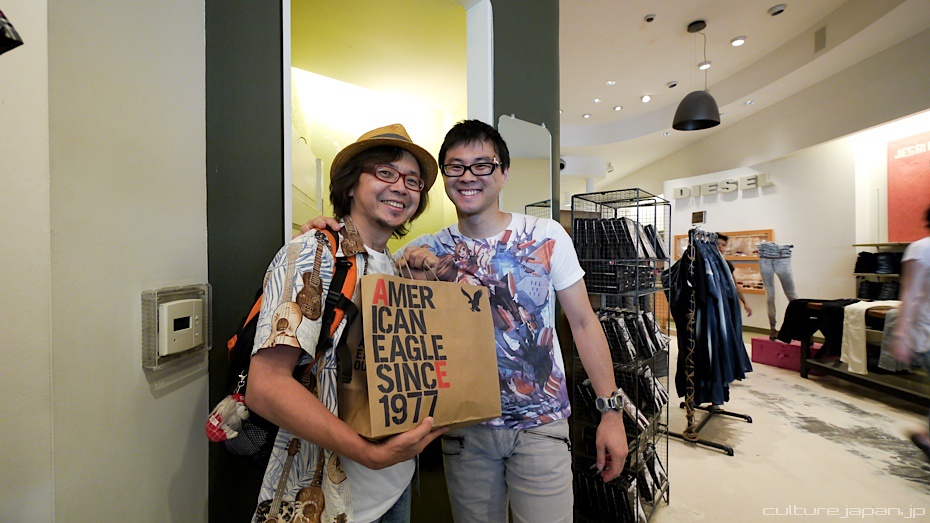 This is Fukuoka-san - the man who made Mikunopolis happen. Fukuoka-san is hooked up to literally everybody in the otaku industry over here.
We continue to bring Japanese Pop Culture to the world and have more events up our sleeves for you ^^; 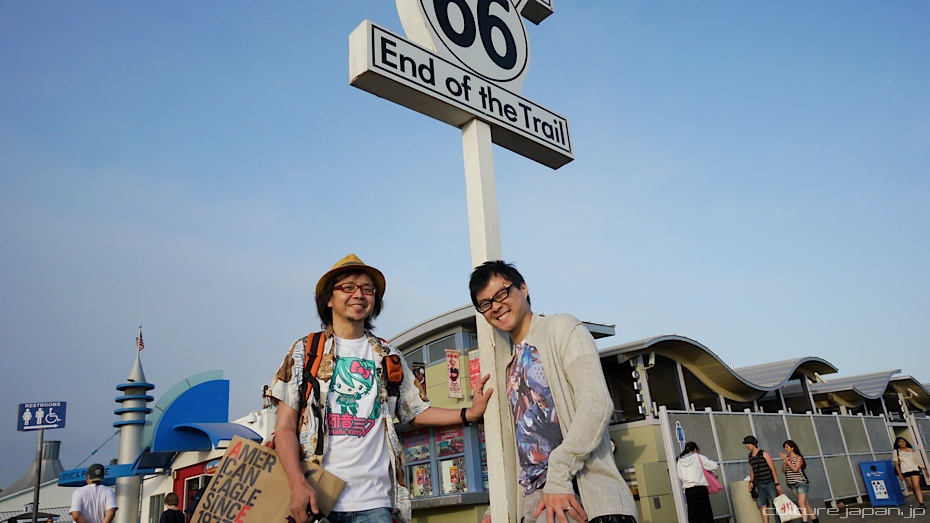 OK, now its time to cover the nitty gritty - how to get you involved in this project - first up for folks who would like to represent their country.

To apply to become a representative of your country, all you have to do is fill out this form. Before you proceed, have a quick look at the questions and prepare the required photos first which should be at least 2000px wide (if possible the highest resolution you have) and non-watermarked.
There will be urls printed for your website/SNS anyway. All photos remain your property and you just give us permission to publish them in the book and use them in related TV and media slots.

You can use free services such as http://ge.tt and http://dropbox.com to upload zip files of your photos.

Photos that we need are:-

If you dont want to show your face then dont submit anything!
Just a couple of photos with you in your room is fine, but do take more photos of the stuff in your room too! You don't have to be in all the photos of your room.

Check spelling of everything you submit as everything will be copied word for word. For areas where you need to type a sentence - please submit in English language.

All Representatives will get a copy of the book signed by Fukuoka-san and myself. Nobody is paid - if thats not cool with you then dont submit anything and read this instead - your career is over before its started if you ask for money for every little thing you do. Much of my career was built doing stuff for free.
If however you think that this is a great opportunity then submit ahead! If you dont think your otaku level is up to the mark then submit anyway!

We will choose the representatives and inform the chosen ones by email.

Apply to become the representative in your region. 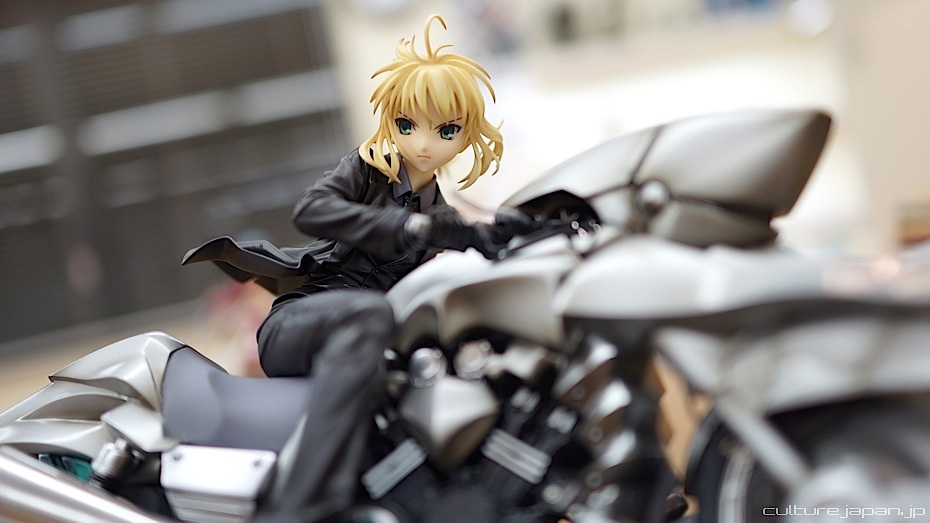 If you do not fancy being a representative for your country but would still like to be a part of the book then all you have to do is fill in this questionnaire - its a bit long so for your efforts, my good comrade Aki Takanori big boss of Good Smile Company is giving away not 1 but 6 of these Saber & Saber Motored Cuirassier due out this month! Winners will be notified by email where we will ask you for your mailing address. Only one entry per person - we know if you are submitting multiple entries! ^^;

Many of the questions are tailored so that my clients at anime and game companies know how to serve you better when producing products for you - for example your oppai size preference for anime or game characters ^^;

As the questionnaire is a wee bit long, there are some trick questions to make sure you are actually reading the questions instead of just clicking the first option all the time ^^;

All information provided is transmitted solely to Culture Japan and will not be recorded or sold to any third party - that is not our line of business.
In submitting your application, you are agreeing to allow your responses (excluding any contact information) to be included in the publication of "Worldwide Otaku Report".
If you are below the age of 13, please be sure to have your guardian's permission to release your information.

If you want you can make a submission for both the Representative and the Questionnaire Data.

Some folks are not going to be happy with some of the terms and questions ( I actually plan on them to write and tweet the traditional hate post to help create a buzz - its awesome for Keyword Search Engine Optimization which leads to sales. Muhahaha ^o^ Trolls are so easily conTrolled ) but hey - if you are not happy with the terms then do not take part - its simple. If I was forcing a durian (with the skin) down your throat however then you may want to complain.

Hopefully most folks should see this book as a great opportunity to get a foot in the door of the anime industry, help Japan and help your local region develop more Japanese content for the locals. Its also an opportunity to build your brand too - just make sure your website is all updated before the book is released!

I'm particularly looking forward to the book too as I want to see what the otaku scene is like in the various regions - what are the local events, where they go to buy otaku stuff etc.

I guess that's it - you got 3 weeks to submit your stuff - July 20th is the deadline.
Arms Installation is Complete - Good Luck!

Fill in the questionnaire and stand a chance of winning Saber and her bike!