Wii top in US 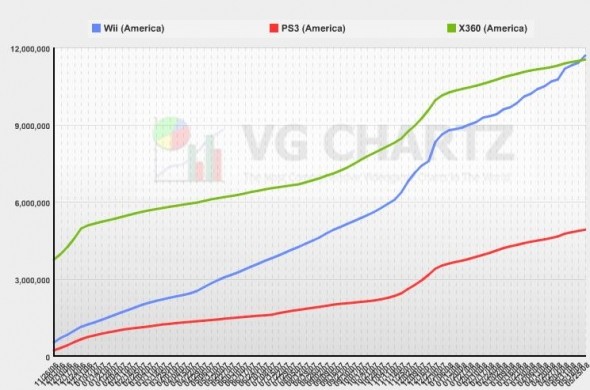 "With the release of the latest figures from VGChartz, Wii has officially passed 360 in the Americas in lifetime sales as of the week ending May 24th, 2008, despite the 360 having an extra year on the market. Wii has reached 11.7M sales in America in its 79th week available; whereas, 360 reached 11.5M in American sales in its 131st week. PS3 is currently at 4.9M lifetime sales in the Americas after it's 80th week on the market. (For reference, the "America" region tracked by VGChartz includes all of North, Central, and South America.)

This week saw a boost in Wii sales due to Nintendo releasing additional supply to support the launch of Wii Fit. To date, Wii remains largely sold out in the US. Nintendo of America President Reggie Fils-Aime had gone on record in February as saying the Wii would pass the 360 in the US by June based on the strength of recently released hits Super Smash Bros Brawl and Mario Kart Wii in addition to Wii Fit (not to mention increased supply).

Have not touched my Wii lately and have been doing the rounds on Devil May Cry. Stuck on the 14th stage trying to get pass some electric knight and he isnt even the boss orz.
Are you bored of any of your games machines?