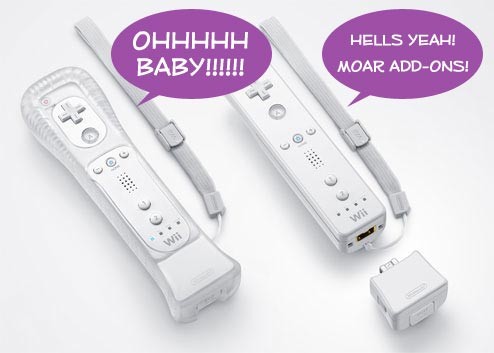 Looks like Wii gets a power up. My question is when are they going to make a sensor set that fits on the arms and legs so that we can fully control characters with our whole body?

Hijacked from skecchi who forgot to quote the source - please quote all sources - its the way of the internets.NINTENDO INTRODUCES THE WII™ MOTIONPLUS
July 14, 2008
Nintendo's upcoming Wii™ MotionPlus accessory for the revolutionary Wii Remote™ controller again redefines game control, by more quickly and accurately reflecting motions in a 3-D space. The Wii MotionPlus accessory attaches to the end of the Wii Remote and, combined with the accelerometer and the sensor bar, allows for more comprehensive tracking of a player's arm position and orientation, providing players with an unmatched level of precision and immersion. Every slight movement players make with their wrist or arm is rendered identically in real time on the screen, providing a true 1:1 response in their game play. The Wii MotionPlus accessory reconfirms Nintendo's commitment to making games intuitive and accessible for everyone. Nintendo will reveal more details about the Wii MotionPlus accessory and other topics Tuesday morning at its E3 media briefing.

So, who here owns a Wii? How about those of you who owns a Wii and doesn't play it at all?

Thoughts about the Wii's game library?