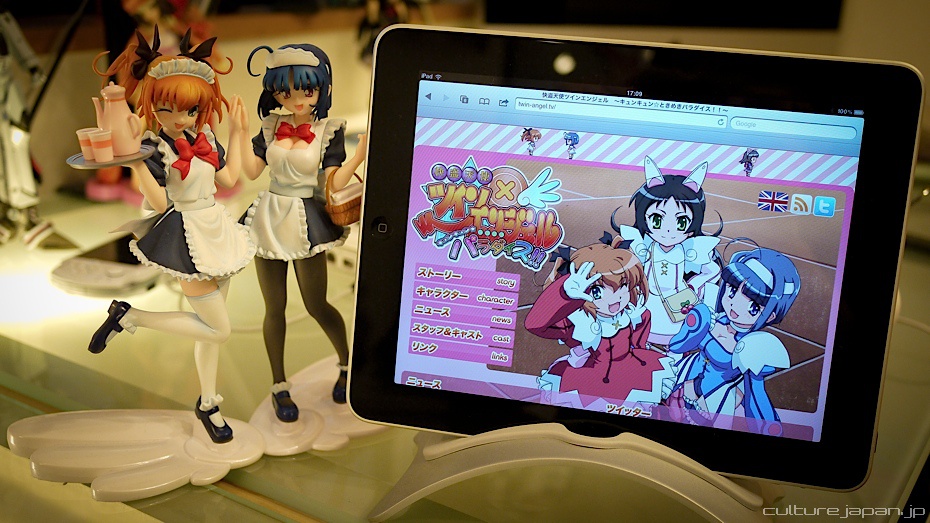 Am thrilled to announce two of our newest clients at Mirai Inc - Kadokawa and Sega Sammy. We've just launched the official Japanese and English website for the up n coming Summer anime title Twin Angel ( http://twin-angel.tv ) which runs on our web platform Mirai Gaia.

They join King Records, Good Smile Company, Cospa, Bushiroad and Ascii Media Works (amoungst others) in using our platform which also runs sites like Figure.fm, Tsubuyaku.fm and this site Culture Japan too.

PV for the show below. 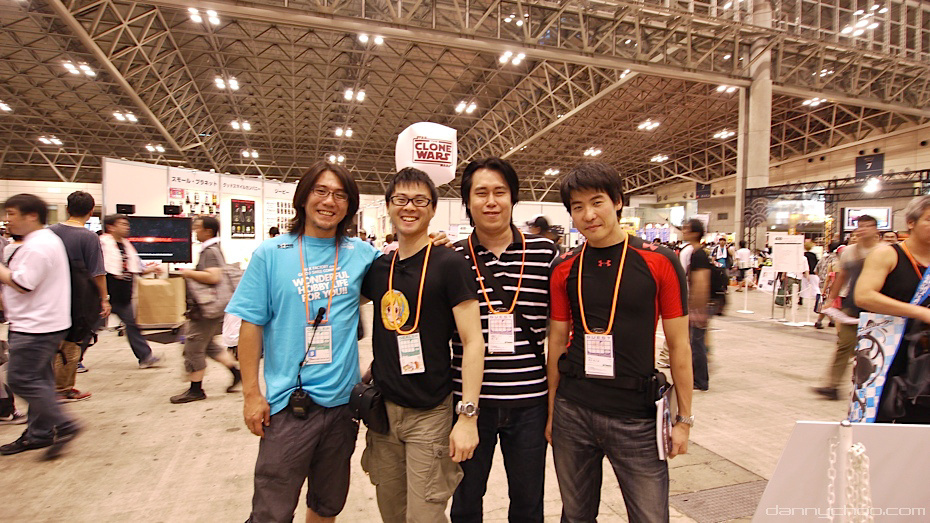 First met Sega Sammy at the Wonder Festival last Summer through an introduction of the Good Smile Company boss Aki Takanori. We then first worked with each other on some filming for Culture Japan TV last Summer. 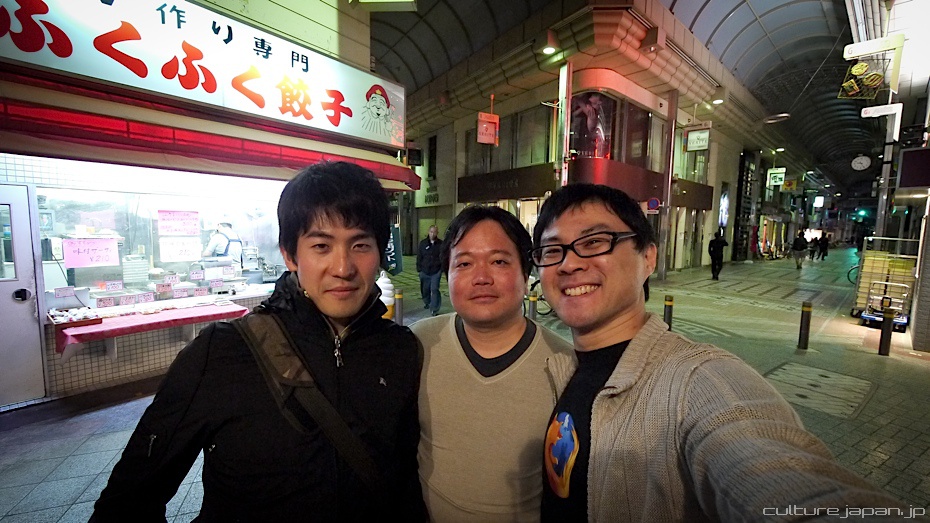 Snap with my main men at Kadokawa and Sega Sammy. We've been working closely together on the Twin Angel for a while now which is a very speacial project for many many reasons ^^
I also discovered that the person who is writing the scenario was a colleague during my years at Amazon who has worked on other titles like Zero no Tsukaima - tis a small world! 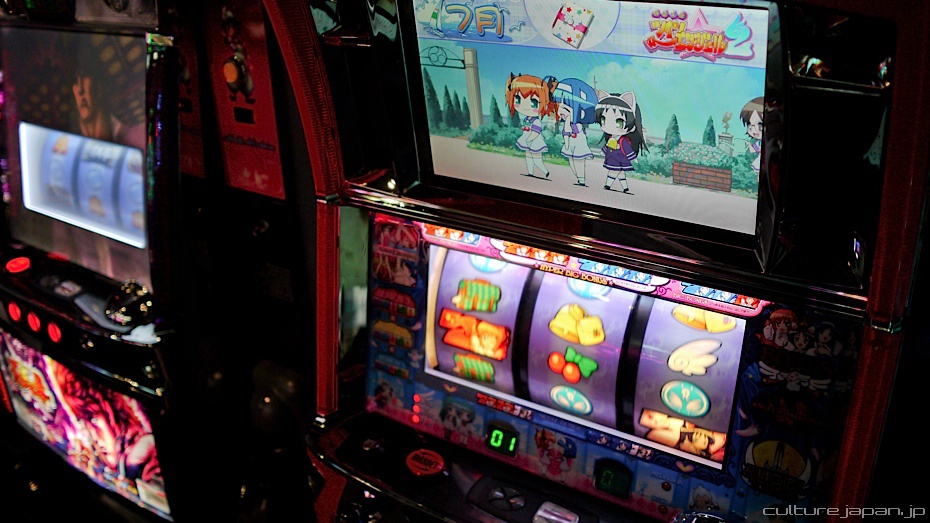 For those who are not familiar, Twin Angel is an original series that was developed by Sega Sammy for their Pachislot machines 5 years ago. The story as follows.
Haruka Minazuki and Aoi Kannazuki are two students at St.Cherine
academy. Haruka is always filled with bubbly energy while Aoi is more mature and a top student in all her classes - but despite their differences the two are the best of friends.
The two girls look like any other girls attending the academy,
but the truth is they are hiding a little secret that they can't
let anybody know about...

During the day they really are just students at St.Cherine
academy, but by night they become the 'Twin Angels',
and fight against the evils of the town!

The lovely Angels are back, and it's time for them to get ready for some action! And some info on who the Twin Angels are:-In 2006 the Twin Angel girls Haruka and Aoi were created as
slot machine characters - back then cute slot machine
characters were not all that popular, but in no time the
girls became popular with both slot machine fans and anime
fans alike, redefining the genre of 'moe slot machines'.

In 2009 an OVA known as "Twin Angel 2" was released which
introduced a new girl to the series named Kurumi. It also
created some opposition for the girls by adding the powerful
Black Trader as well as a rival for the girls known as Twin Phantom.
The OVA created more fans of the series, both for it's characters
and storyline.

And now 2011...
The Twin Angels are set to become a full TV anime production!
In the video below, you can see that the display shows events according to how well or bad the player is going. There are special anime sequences and even QR codes that are issued so that when you reach a certain level, you get to scan the code and download some exclusive goodies.

And below is a peak at the Twin Angel world - bits n pieces taken from the OVA many moons ago. 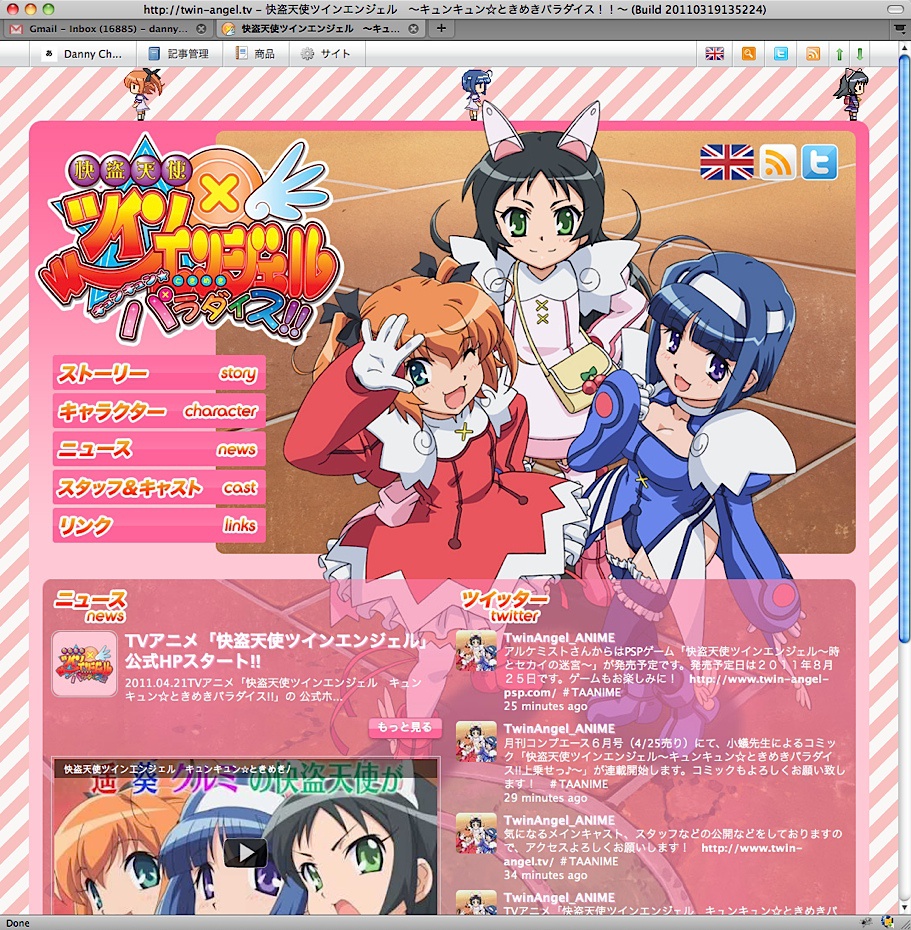 The site is live at http://twin-angel.tv/ with the English version at http://twin-angel.tv/top/en/
Am hiring a reader part time who helped come up with the framework and I polished everything off in Fireworks. Wish I had more design sense ><
The little chibi characters you see running around are also commissioned from another reader Arayden. I discovered his talent through his postings at Figure.fm and occasional links in comments left on this site.

The other chap who worked on the site is my tech guy Chris Gaunt who I hired when he was a reader - I think he still is ^^; 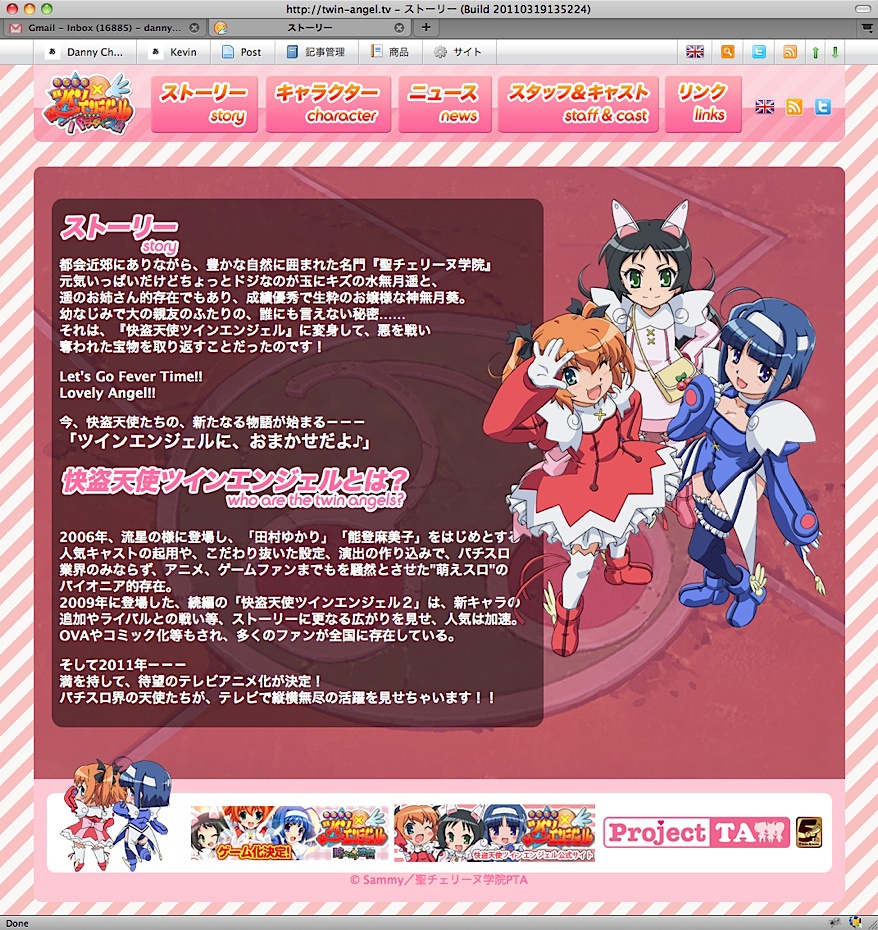 The feedback from all our clients help improve Mirai Gaia - the new features are then available to all our clients which helps improve their various business conversions. It took quite a few years to build the platform which nearly left us homeless! ^^; 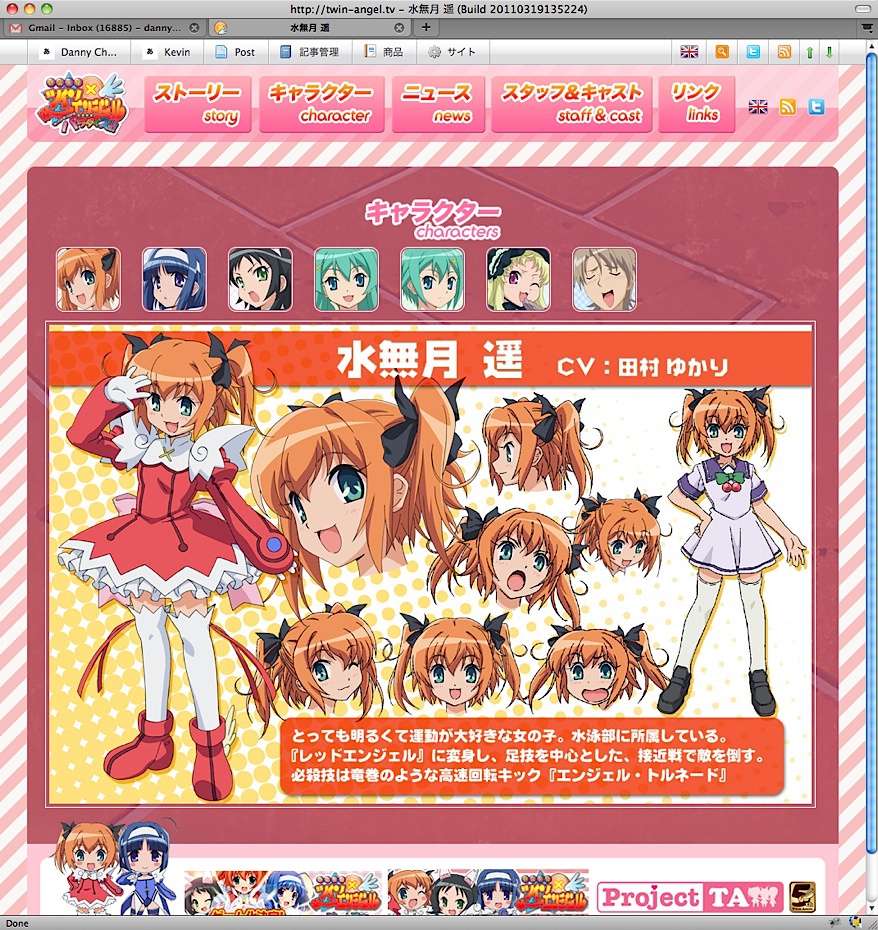 Kadokawa and Sega Sammy are very pleased with the site and so am I - although the menu at the top needs some design tweaking which I'll do next week. 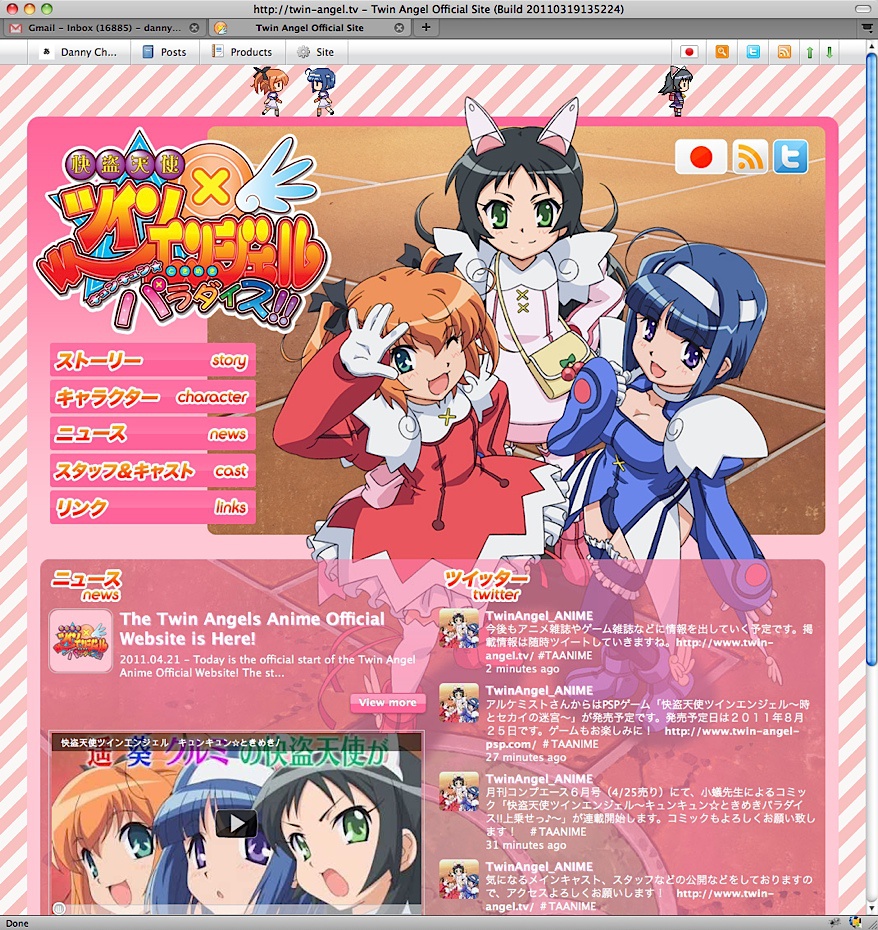 Up until now we've done official English sites for anime titles for King Records but this is the first time we've done one for a Japanese title. I'm over the moon ^o^
Twin Angel comes in English too for a very good reason which you will find out when the new anime series starts to air this July. 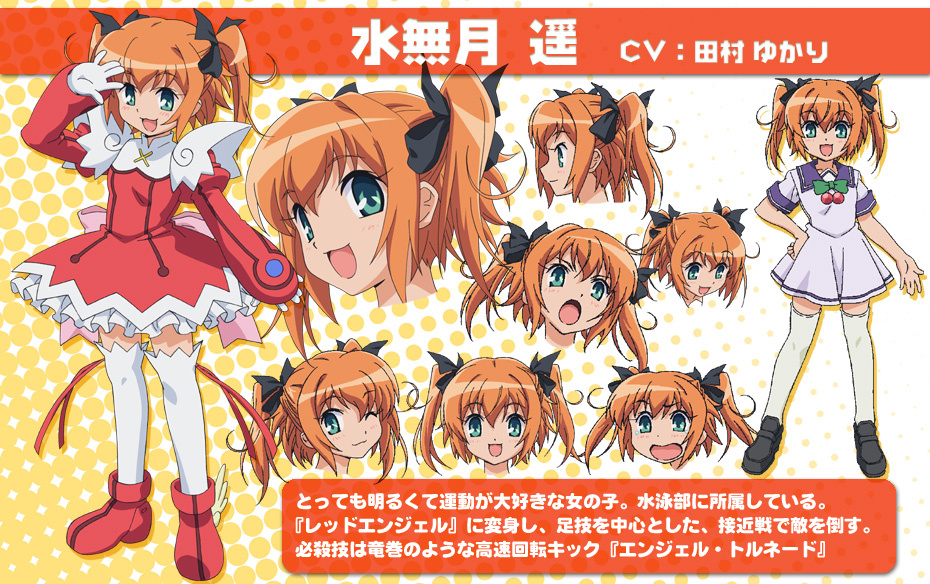 The characters that appear in the anime are as follows.

Haruka is a student at St. Cherine Academy, but is also one of the Twin Angels - the 'Red Angel'. She has a bubbly personality, excels at sports and is even part of the swimming team at the academy... but she can also be a little bit careless from time to time. In battle her favorite moves always include kicks, including her best attack which is called the 'Angel Tornado'. 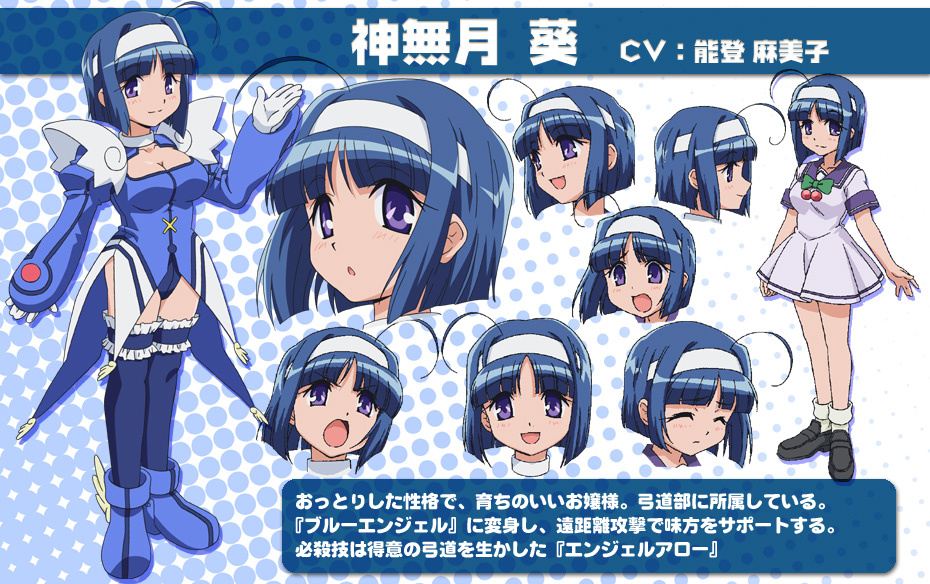 Aoi is a student at St. Cherine Academy, and is also secretly one of the Twin Angels - the 'Blue Angel'. She has a very relaxed personality and excels at all of her subjects at school, although she can also be a little unpredictable at times. She is part of the archery team at the academy, but she isn't good at any other sports. In battle she puts her archery training to the test, with her strongest move being the powerful 'Angel Arrow'. 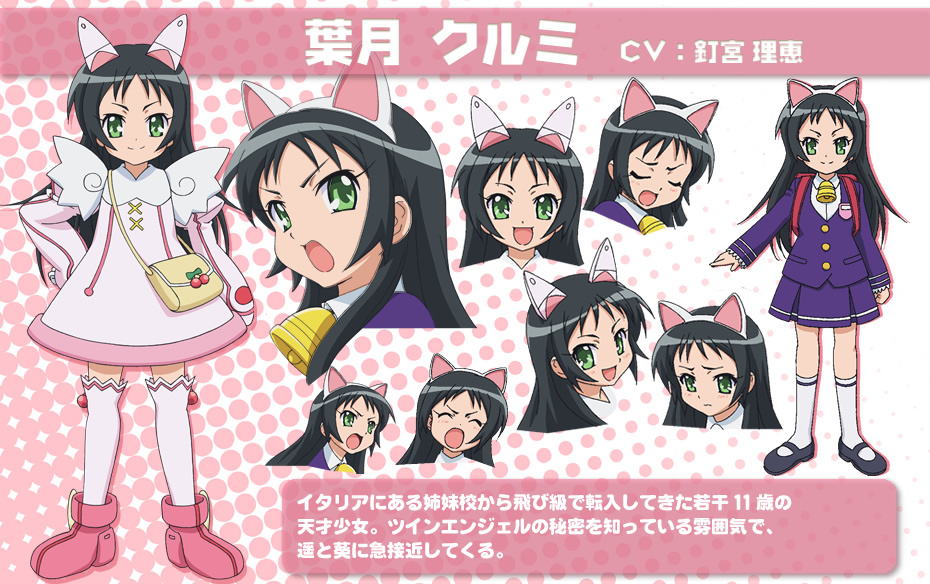 Kurumi is a young genius that transferred from her St. Bernardi elementary course in Italy straight into St. Cherine academy, completely skipping some grades due to her incredible intelligence. She seems to know about Haruka and Aoi's secret, and quickly tries to get close to them. 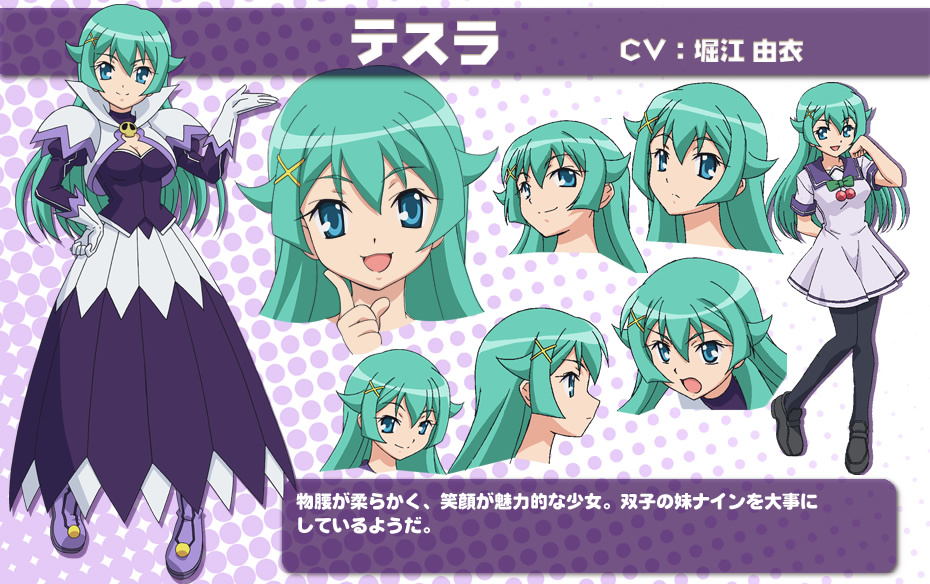 Tesla is a charming lady with a wonderful smile. She always takes good care of her twin sister, Nine. 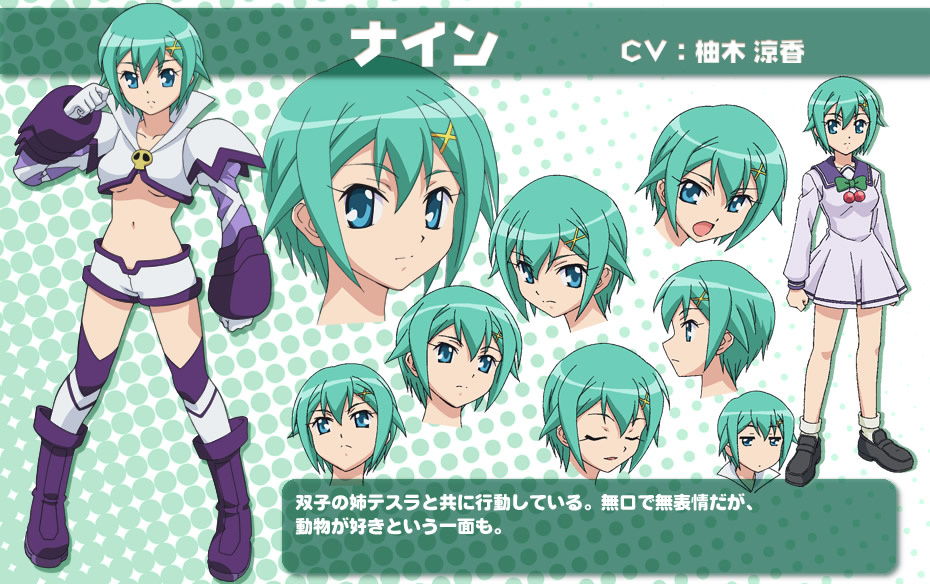 Nine is Tesla's twin sister and always works together with her sister. She hardly ever speaks and has a soft side for animals. 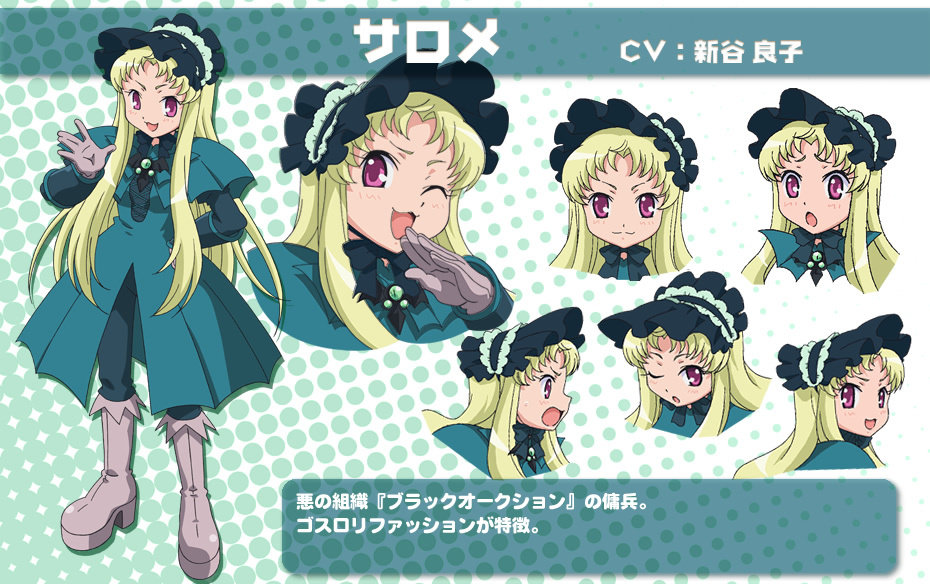 A mercenary employed by the evil 'Black Auction' organization. She likes goth-loli fashion. 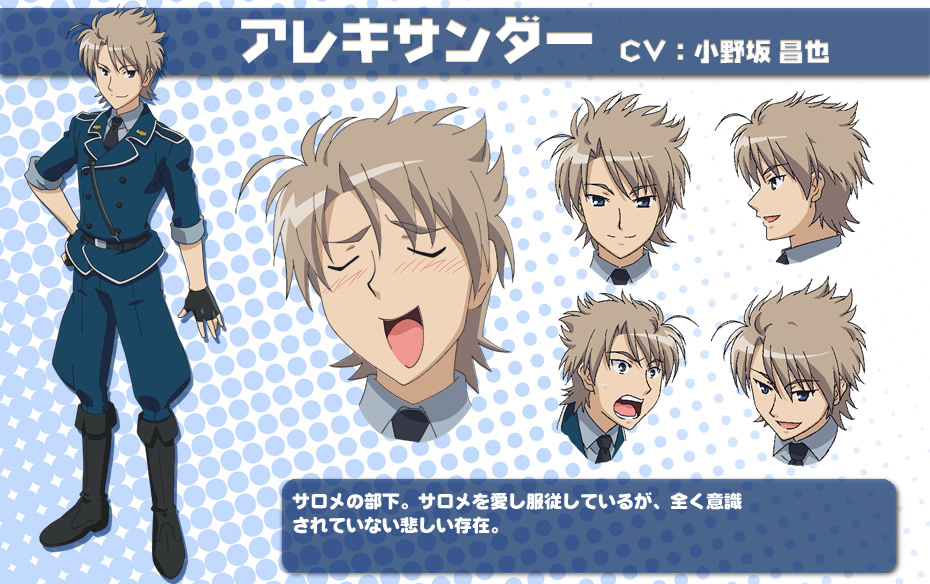 Alexander works under Salome and absolutely adores her, following her around wherever she goes. Unfortunately for him, she just seems to ignore him constantly. 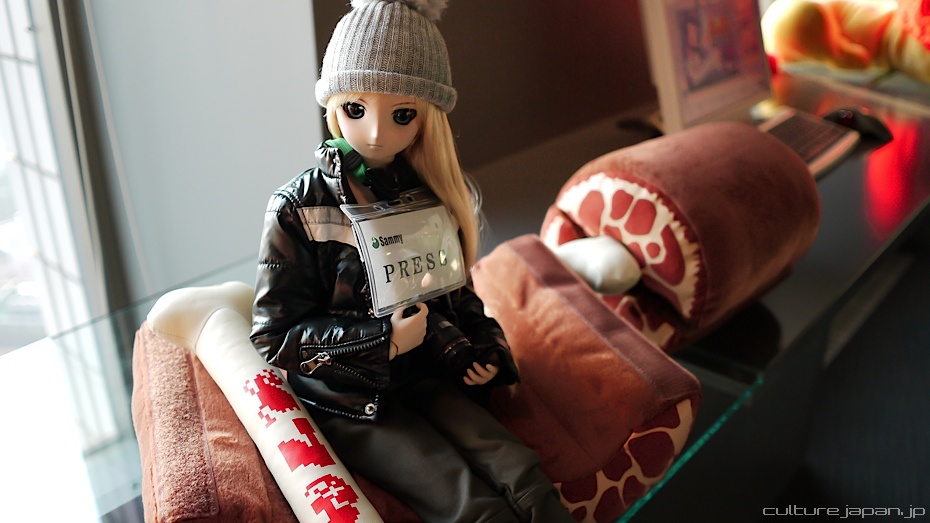 Have always wanted to introduce more of the Japanese culture Pachiko to the world and got the chance to do so for Culture Japan TV last year - was handy that I already had those contacts at Sega Sammy.
Here Saber is ready to film with her press pass while for some reason sitting on a piece of meat. 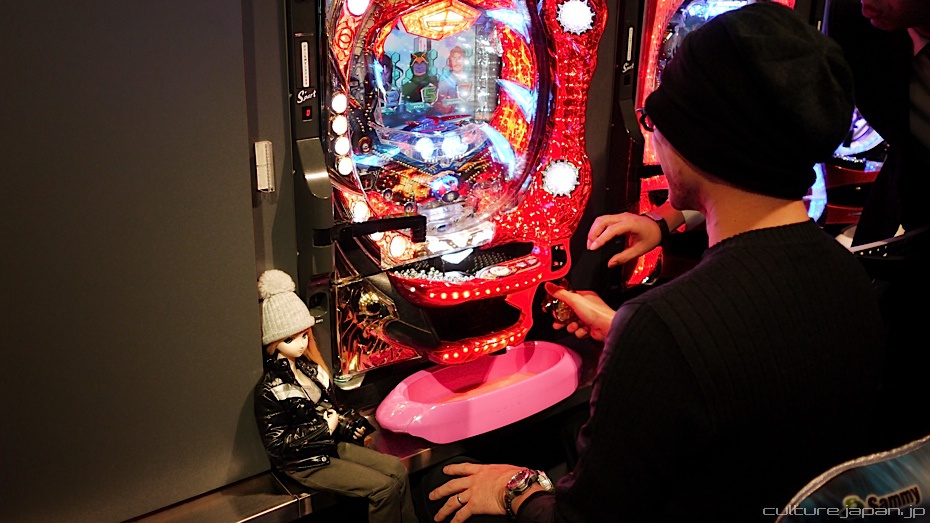 Tried Pachinko during my first visit to Japan and didn't get the chance to play until the day we were filming at the Sega Sammy showroom - got to play it to my hearts content! 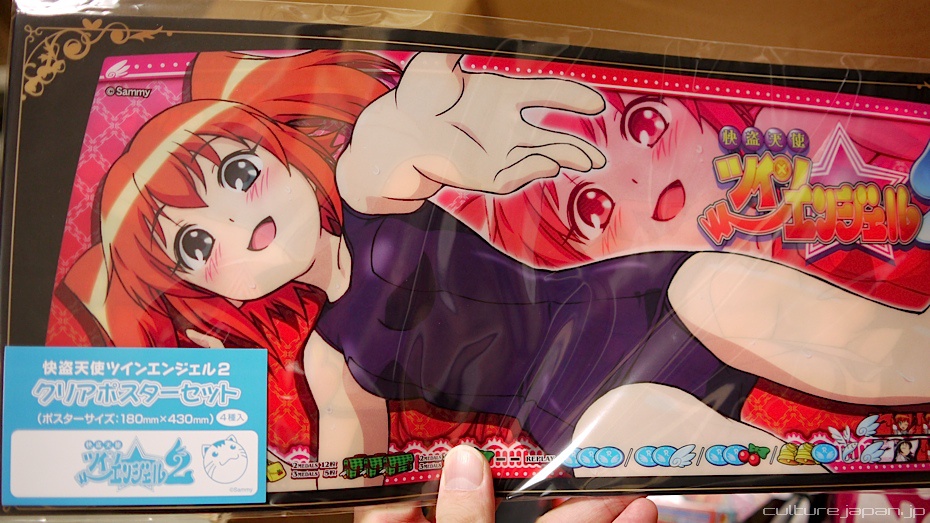 This illustration is found at the bottom of the Pachislot machines which they stuck on a clear poster as merchandise. Very cute. 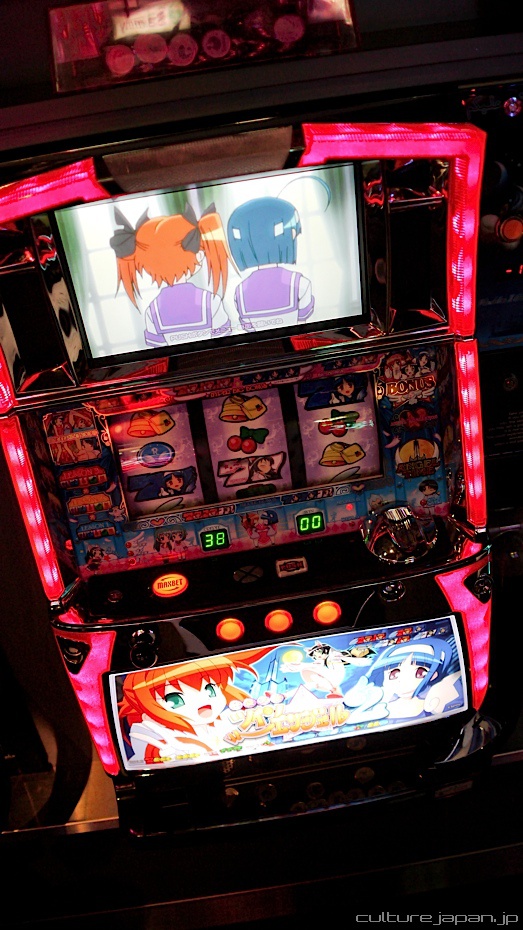 Sega Sammy make both Pachinko and Pachislot machines. Pachinko is the one with all the ball bearings while Pachislot is the slot machine. I'm currently working with Anime Expo and Sega Sammy to try and bring a few from Japan with me for you to play with - we'll leave them at AX and auction them off for charity. 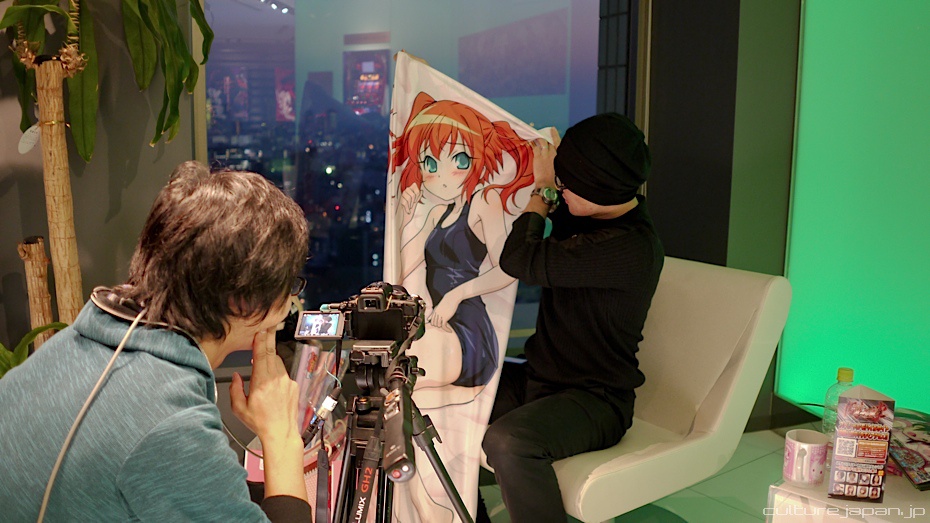 Filming At the Sega Sammy head offices. You can see whats going on here at the 25 min mark in the digest version below. 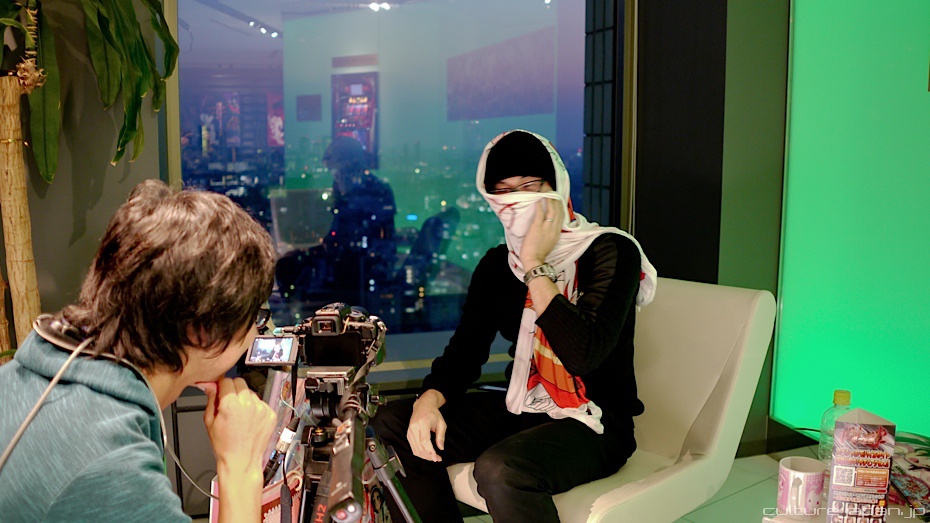 Perfect for keeping warn during those cold nights. 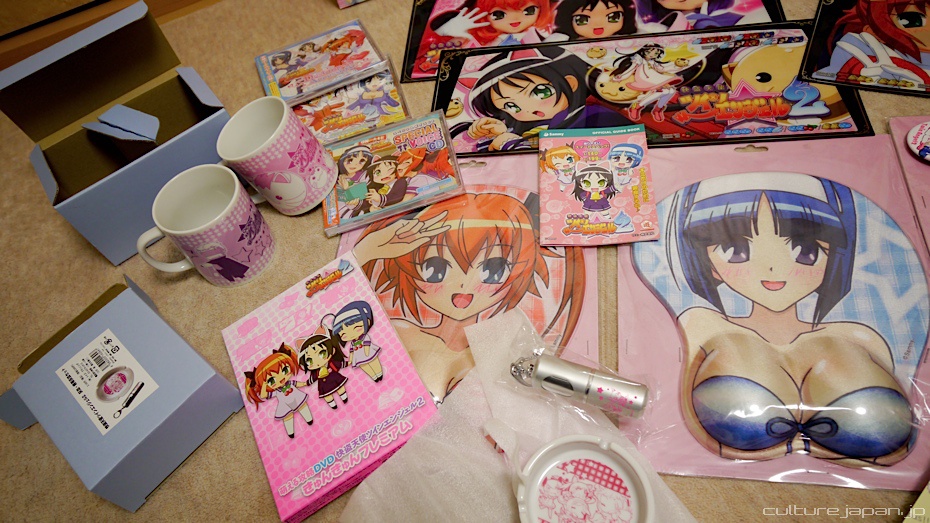 A bunch of Twin Angel stuff which I stole from the Sega Sammy offices - incredible how they have poured effort into the girls and grew them from being just mascots to Manga, Anime and also announced today is the PSP game. 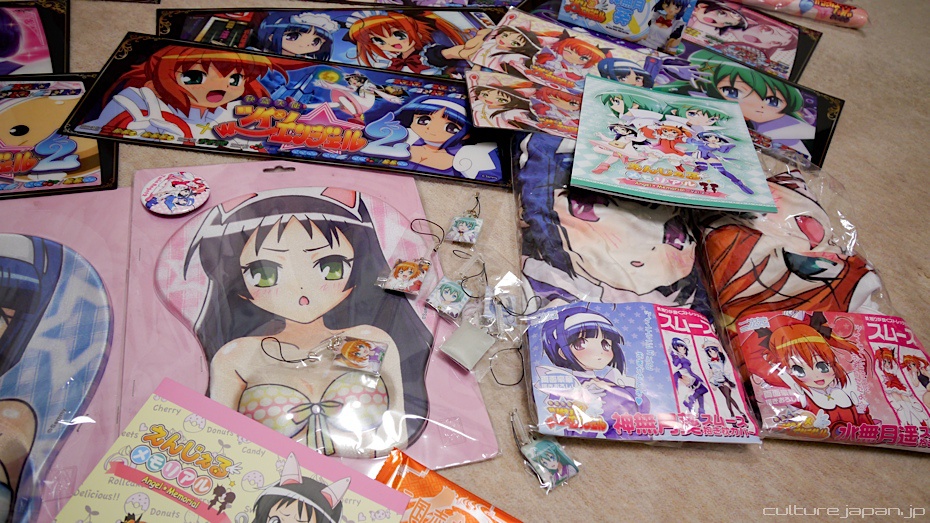 Kurumi's oppai mousepad is so small that its nearly flat ^^; 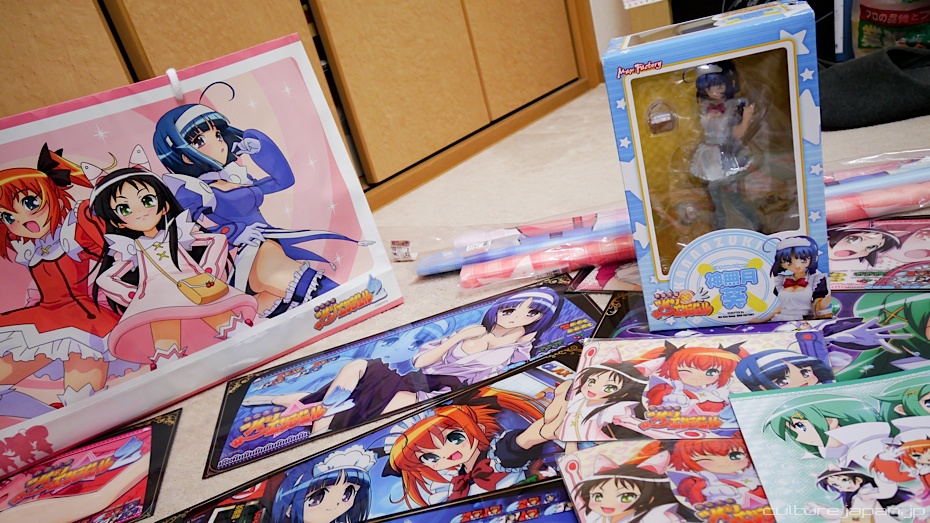 They even got figures which were made by Max Factory a while ago. 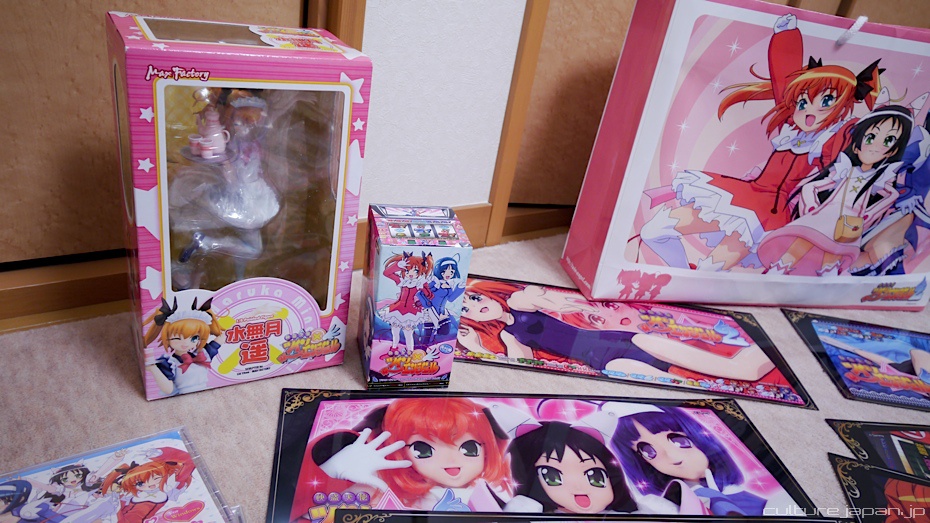 Cards by Bushiroad too! 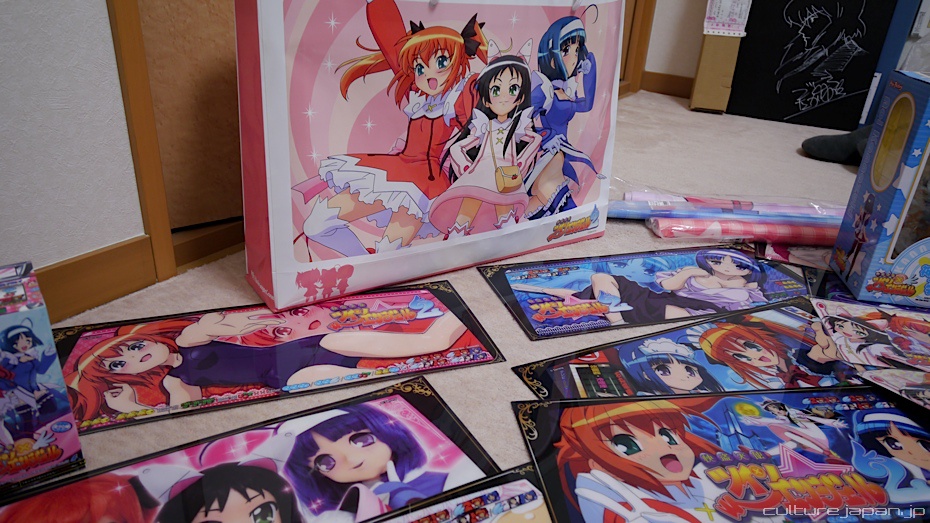 Load of stuff to put up on the wall. 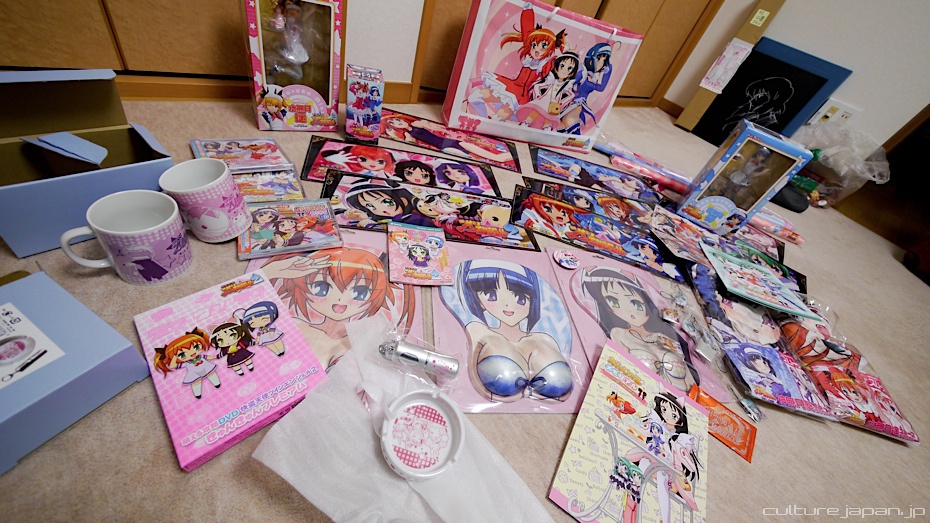 I cant wait until the show airs in July. Its going to be a very special anime indeed ^^