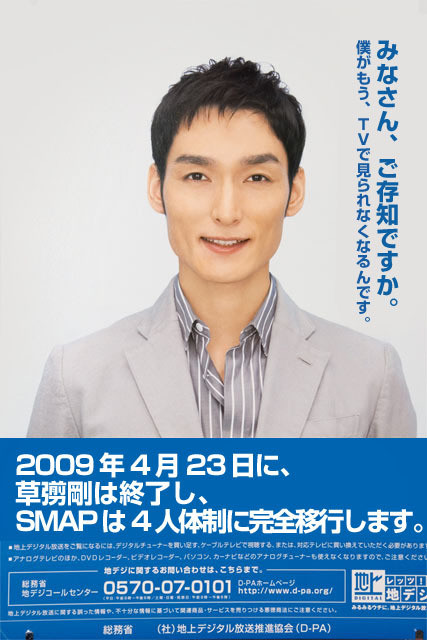 Pretty much dominating the news now - SMAP member Tsuyoshi Kusanagi gets arrested after being found in his birthday suit in the park. News of the incident below.

The Minister for Internal Affairs and Communications made a statement about how he is outraged at Tsuyoshi's act - one of the main reasons is that Tsuyoshi is the image character for promoting the change to digital broadcasts in 2011. The image in this post is a shopped (and quite evil) poster replacing the "analog broadcasts will end" with a "Tsuyoshi has ended." One of the digital broadcast commercials below.

Tsuyoshi was due to appear in many commercials which have all been canceled. Many folks on the streets were interviewed and asked what they thought. Many said they were shocked. I must admit that I was a bit surprised too but don't think he should be slaughtered this way for sitting in his B'day suit on his own.
Other opinions included stuff like:-

- Yeah so what - the media making a big fuss out of nothing.
- He really should watch himself as he is setting an example for all those who want to become an idol.
- Whats wrong with being naked?
- He's a really nice guy so there must be a reason why he did it. I will support him no matter what.

Tsuyoshi is quite popular in South Korea too and the Japanese media even got their staff to question the folks on the streets of Seoul - most of the opinions were "창피해〜" or "How embarrassing."

Tsuyoshi appeared as the main character in the motivational drama "Koi ni Ochitara" - its like a rags to riches thing but in this case the "riches" is happiness/success and not necessarily money. Seeing Tsuyoshi working his way up through the company was really motivating to watch. The ED below.

Original text from Alafista OTAKU below.I never believe it when I heard it but Tsuyoshi Kusanagi from SMAP has been arrested by the police for public indecency after exposing himself in a park in Tokyo.

Police had found him sitting naked by himself in a park in Tokyo’s Minato-ku at about 3 a.m. on Thursday. He was apparently drunk at the time. The 34-year-old has reportedly admitted to the allegations against him.

Law enforcers said a local resident found Kusanagi shouting out incomprehensible statements and called police, who arrived at the park and found the pop star. When being overpowered by police, Kusanagi was quoted as shouting, “What’s so bad about being naked?”

According to police, a breath analysis test taken 5 hours after Kusanagi’s arrest detected a BrAC of 0.8 mg/L, well over the legal limit.