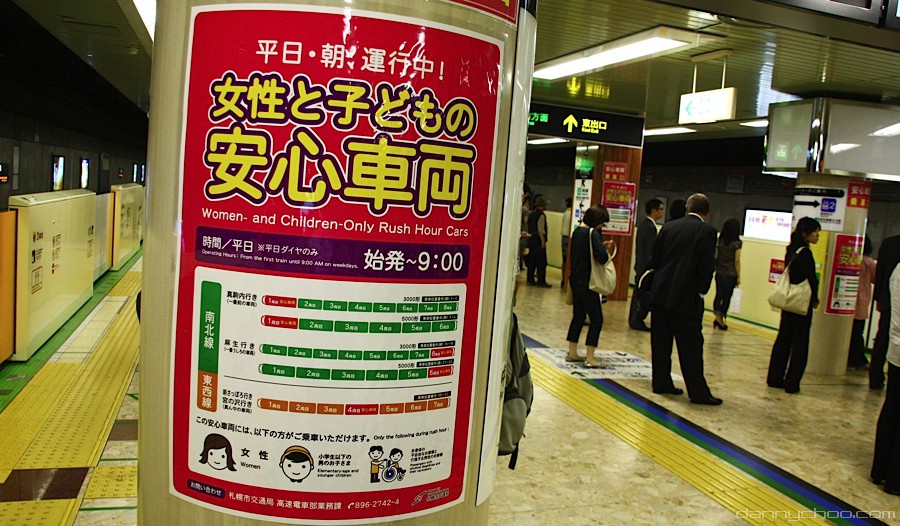 These carriages are to be used only by women and elementary school children up until 9AM when the rush hour is over.

The problem of molestation on trains seems to be getting worse. The police started a "Stop Molestation" campaign which was covered by the media yesterday.

Lately there has been a rise in cases where perverts would gather together others online to group around women on trains to grope them.

The worst thing is that the perverts have been saying online that they can get away with groping because its a crime to grope and make a woman feel disgusted but not a crime to make them feel good. (source) 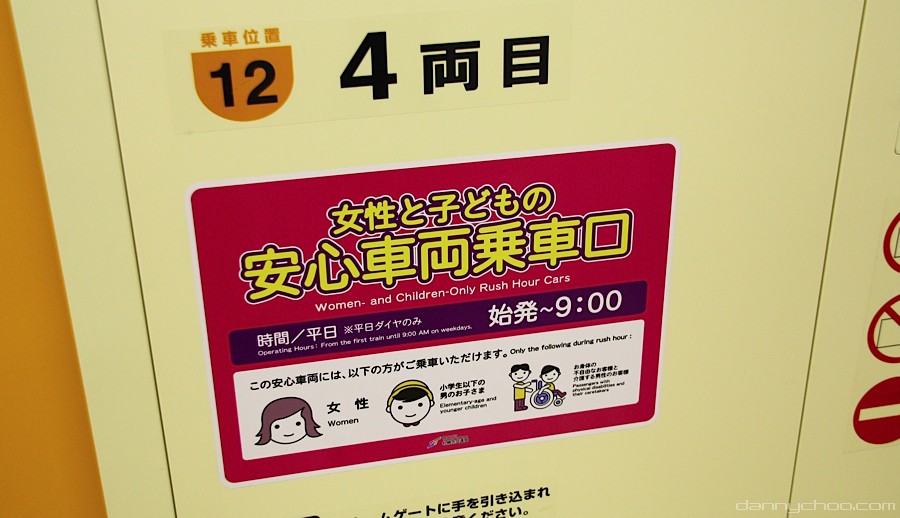 The highest groping incidents were reported to be on the Saikyo line. An unemployed man of 30 and a salary man in his 20's was caught groping after acquiring information online about "how to grope."

Unfortunately, there has also been women out there taking advantage of this situation who accuse innocent men of groping them. This is called "Chikan Enzai" or "false accusation of groping."

A typical case is that two girls work together. After they designate their target, one of the girls will follow the man off the train and say "Sawatta no ne?" or "You touched me." The second girl would join in as a stranger and say "yeah I saw you touch her."
The first girl would then say, "give me 40000 and we can forget about this or I go to the police."

The video news reports in my previous Men Only Carriage have been deleted from YouTube but they showed examples of how men are accused of groping.
A woman bumps into a man (who had both hands in his pocket) and falls to the floor crying saying that he touched her. The man was falsely accused of groping her and spent the night at the police station.
The woman approached the police a week later to confess that she did it because she wanted ”private settlement money."

Another example was how a 24 year old man was arrested for making his girlfriend stand close to a target on a carriage and say that she was touched. The 24 year old was later arrested after his girlfriend betrayed him and confessed that they tried to set up their target for money.

If a man is accused of groping and brought to the police, he has the option of paying 50,000 yen to the victim or serve time in jail. A man who was falsely accused of groping was sentenced to 1.6 years in Jail - the report below. 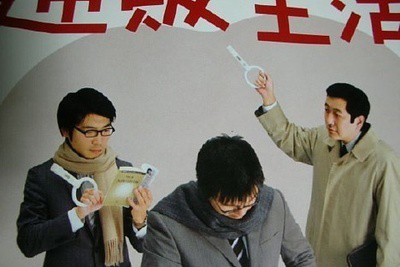 Until men-only carriages are introduced, men who are afraid of being falsely accused of groping will have to do with these straps which prove that their hands are occupied.

Is perversion in public a problem in your neck of the woods? Back in the UK, I remember two of my female Japanese friends encountering a dolphin flasher on the London underground...

What would you do regarding this mess with women being groped by evil men and innocent men being falsely accused by evil women?