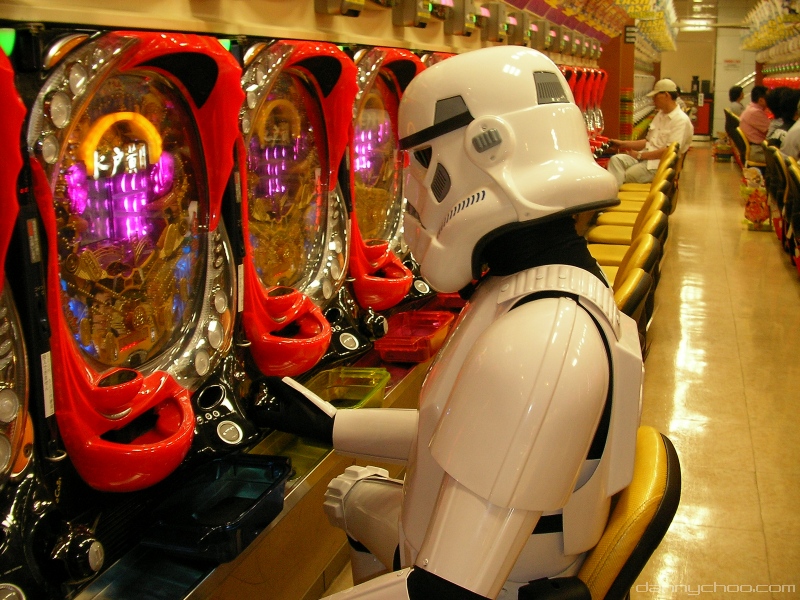 After world war two, manufacturers in Japan for some reason had a surplus of ball bearings (would love to know why) and some folk decided to put them to good use. The "good use" in this case was a game called Pachinko.
People line up every morning to get into a Pachinko parlor where they then buy a few crates of ball bearings to pour into a Pachinko machine. They then use a knob on the machine which controls the velocity of the balls that are being shot out the side of the machine. The balls then make their way randomly hitting nails(?) which then change their trajectory. The idea of the game is to get as many balls as one can into a slot in the middle of the machine. When that happens, more balls come out of the machine and an assistant helps stack up yer crates of balls.

The reason why people line up every morning to get into these parlors is because certain machines have been rigged the night before to deal out better results and this is common knowledge among the veteran players - how they identify which machine has been rigged is beyond me.
Its illegal to play for cash in Japan so what happens is that when one has had enough of the noise and cigarette smoke that fills the parlors, they go to a counter in the parlor and exchange their balls for items such as cuddly toys and pens. What they then do is take these useless items and go offsite to a separate dingy looking store and exchange their stuff for cash - a loophole.

Was out shopping for groceries in armor as usual and stopped by to play...