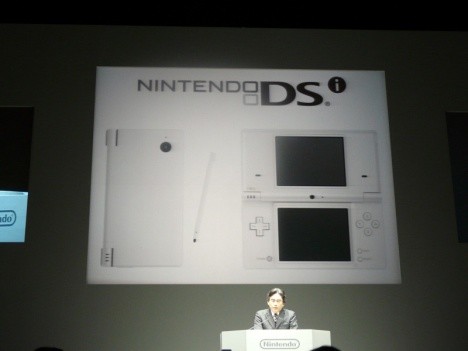 Nitty gritty details for the DSi below. I like the thought of the larger screen size and being able to use an SD card to view images and audio - still not sure if I would get one straight away though.

Original text from nya-chama below.Rumours have circled around the net for a few days now, but it seems they were true. Nintendo just announced the new DS model. The DSi.

The DSi is 12% thinner than its predecessor but at the price of the GBA slot. I has two cameras and a slightly bigger screen. One camera(outside one?) will be capable of 3megapixels.

It will have an SD slot to store photos and music; as well as storing downloadable games and swapping between the Wii.

New DS shop will be available where you will be able to buy "DS Ware", software prices from the range of free to 800 points. If you buy one before March 2009, you will receive 1000 points for free.

A new service called "Nintendo Zone" will start similar to the free wi-fi in every McDonalds the US had a while back.

I loved replaying my old GBA games when the DS was first released but 4 years later I find myself with an empty slot all the time >.>
Will the camera will be used for any games or if it's just tobe used a simple camera...
I guess the only thing I would get excited about is the smaller size, the web browser and the new DS Store. Downloading games are so much convenient! *cought*R4*cough*, speaking of which.... will this be R4 proof? If so... how long before it's hacked?