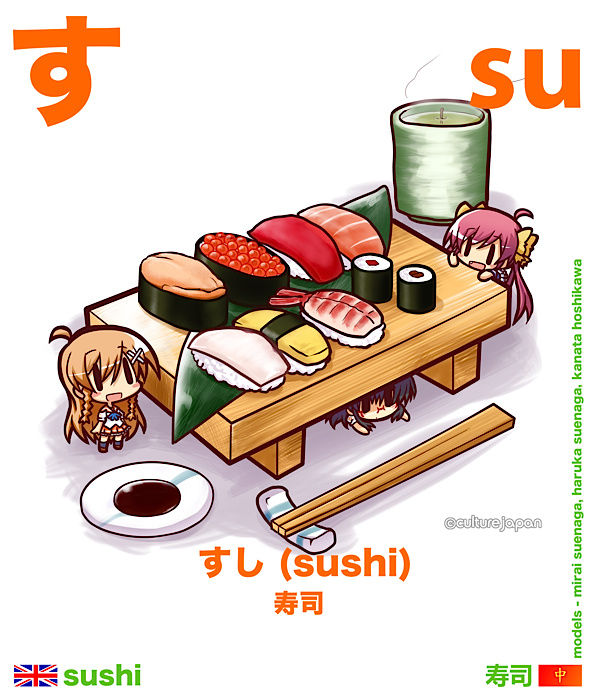 Mirai and Co look so adorable that you could just about eat them along with the sushi too! How often so you eat Sushi? We have it about once a week in the Palm shopping arcade at Musashikoyama.

Following on from the previous hiragana in this Moekana series which was し, today we learn "す" (su). Today's word is "すし” (pronounced "sushi") which is mostly a slice of raw fish rested on vinegar rice. There are other types of Sushi including egg which I used to choose all the time just after arriving in Japan - wasn't used to eating raw fish. I only started to eat Sushi *with* wasabi after I heard how good it was for ones health ^^

The katakana equivalent of "す" is "ス".
Today's models are Mirai Suenaga, Haruka Suenaga and Kanata Hoshikawa illustrated by Ikkyu-san.

You can use this in a sentence like:-
Omae no iki wa sushi kusai zo
お前の息はすし臭いぞ
Your breath smells like sushi

You can say this to the person who is interviewing you for a job who will think you are brave for saying such a thing and hire you immediately.

Write out "す” 50 times while being interviewed on the table and say "す" just after being asked each question. 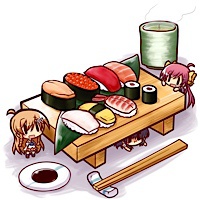