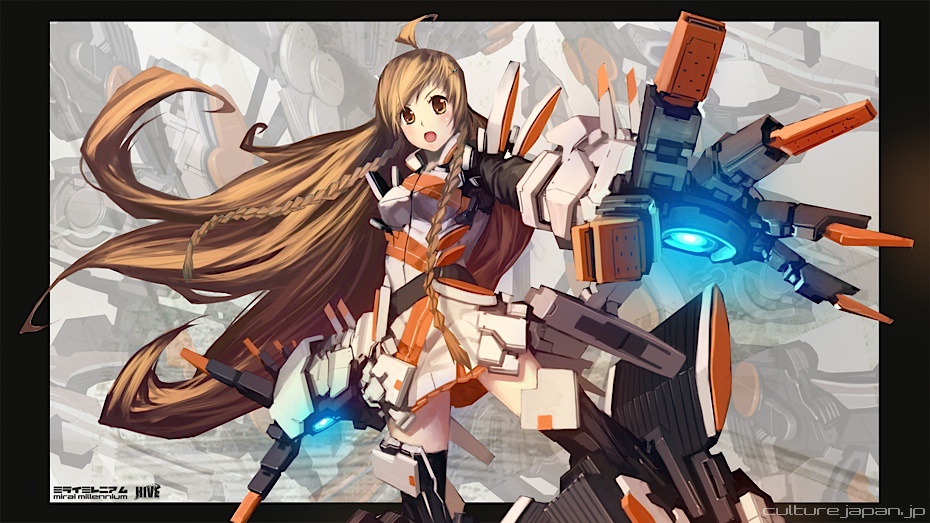 Update - the OP is complete!

Last year I started to work on Mirai Suenaga's story entitled Mirai Millennium. At the time I was working with Anin Tofu-san on the concept artwork before meeting Skan Srisuwan who was the lead designer at Square Enix who managed the Front Mission project.

Today we are going to take a look at the final designs of the Solar Marine uniform and Retrograde suit that Skan and I worked on for a few months.
The 2048px x 1152px wallpaper of this illustration available at Flickr. 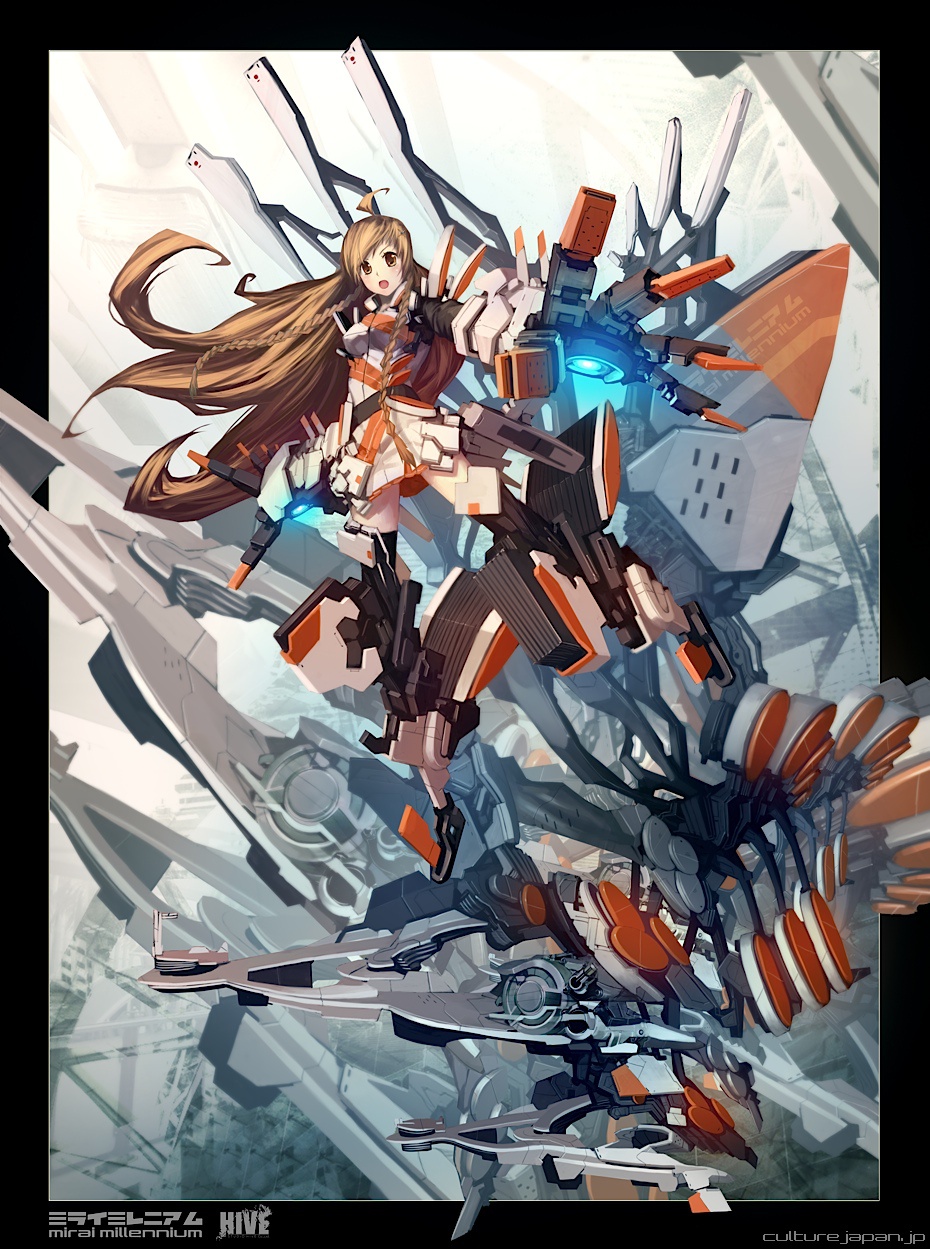 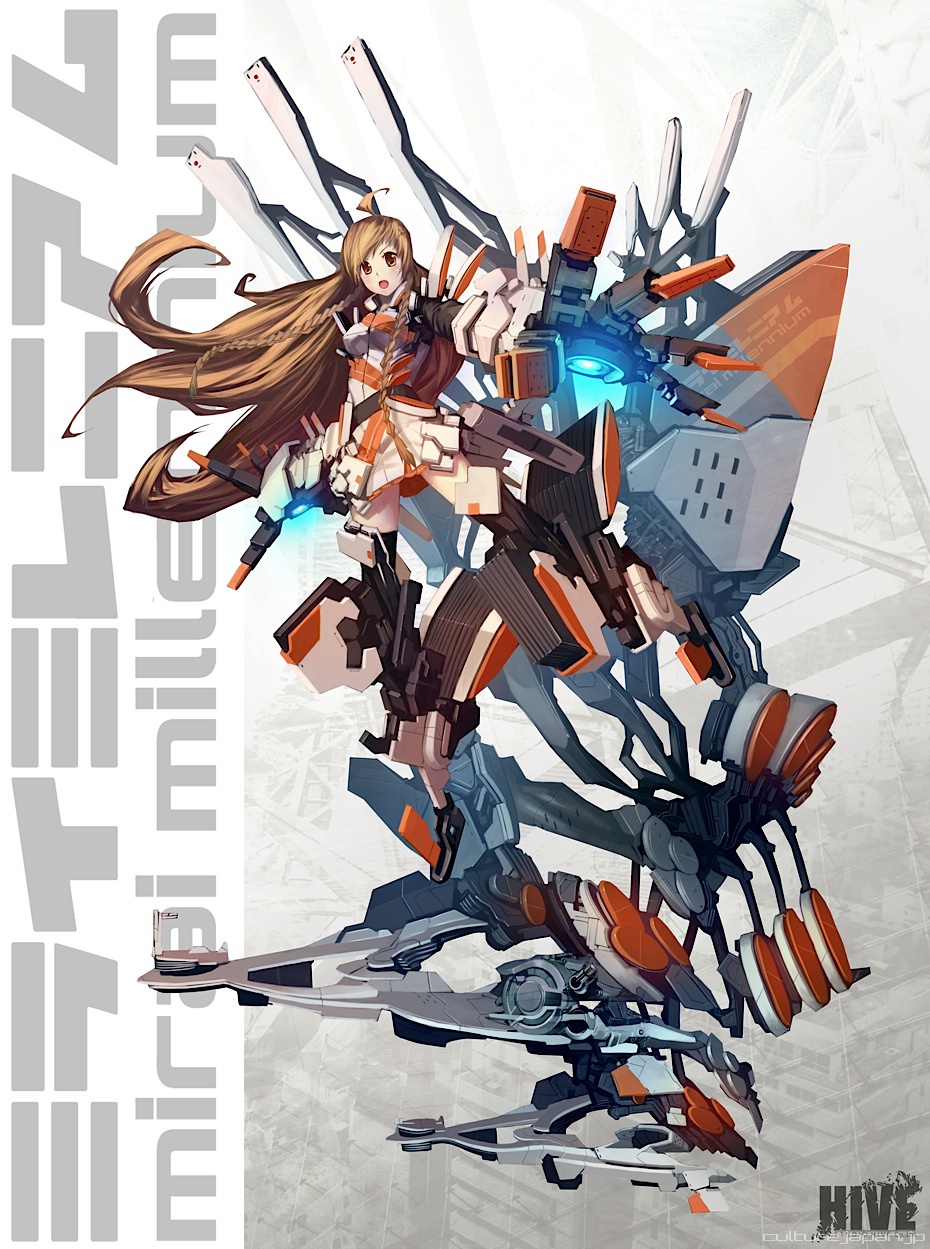 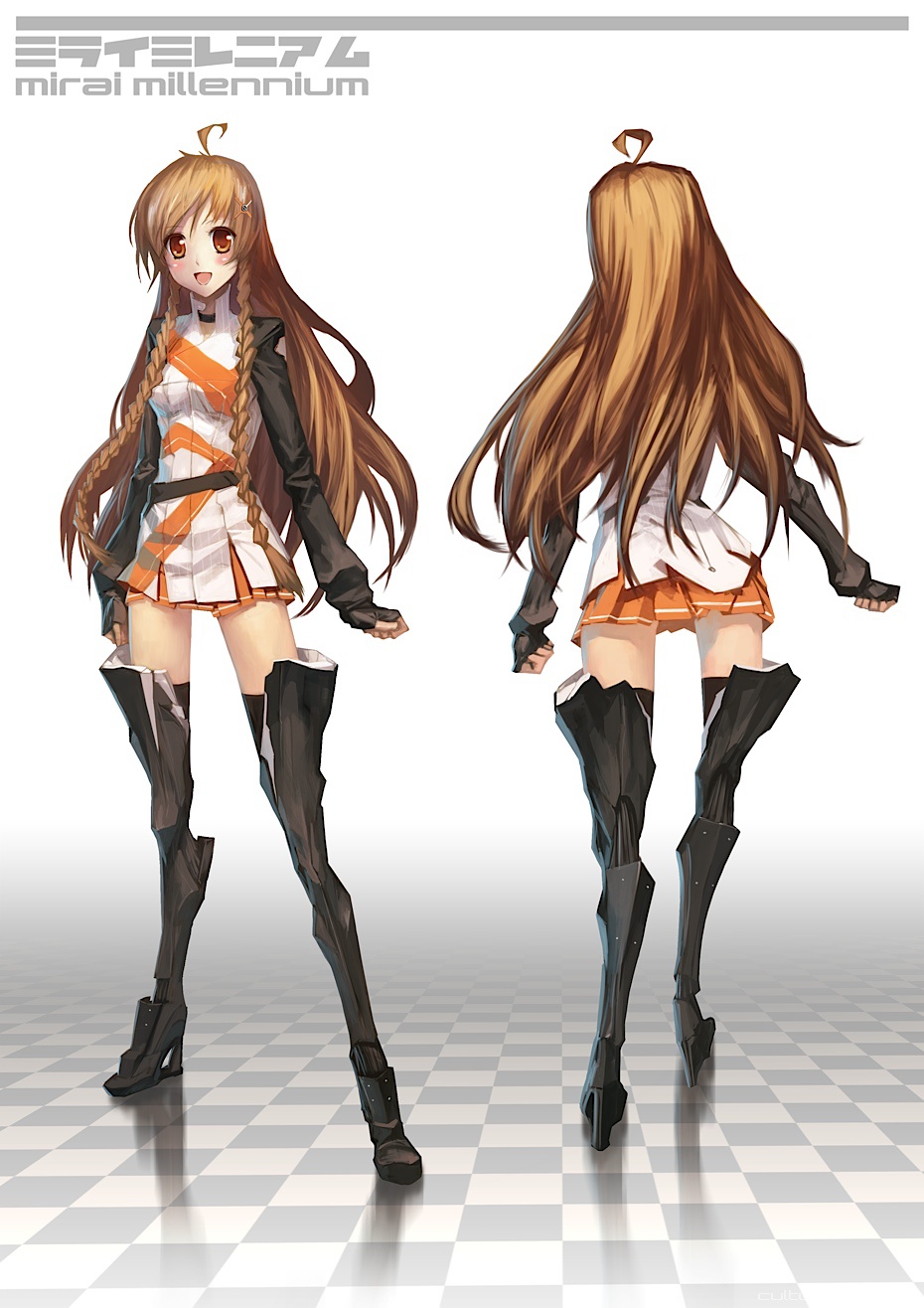 Final design of Mirai's Solar Marine uniform. Boots are made from Orgtanium which is an organic breed of titanium. The light flexible material builds up energy though kinetics that enables the wearer to pilot the Retrograde suits.

For folks who are doing commission work for me - use this image above as a reference for your work. Files should be at least 350dpi @ A4(4961px x 7016px). Uniforms should be drawn on its own layer with the bottom layer being a Mirai in birthday suit. Facial expressions should also be on a separate later. Final delivery should be in PSD format. 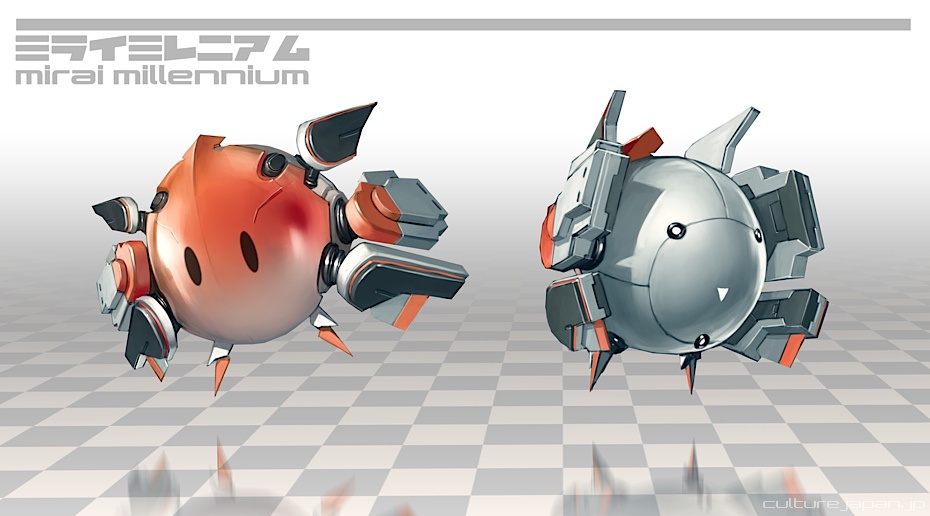 Solar Marines have a very important side kick called "Retrokyu" . Expressions such as anger, joy or just plain "......" are projected on the front panel of the unit. Retrokyu would hover around their owner and normally take the form of this ball shape.
One of the reasons why they are so important is because they actually transform into their owners Retrograde suit. 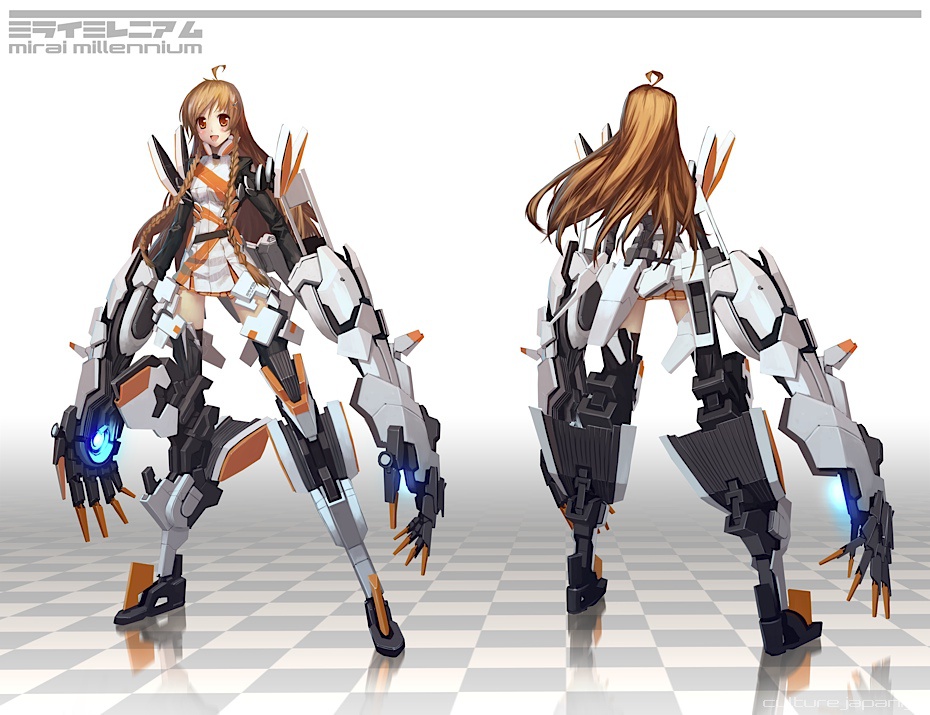 And this is the final design of the Retrograde Suits. The reason why the final suit doesn't resemble the Retrokyu is because it transforms in Transformers style ^^; Next step is to show you how it would transform. 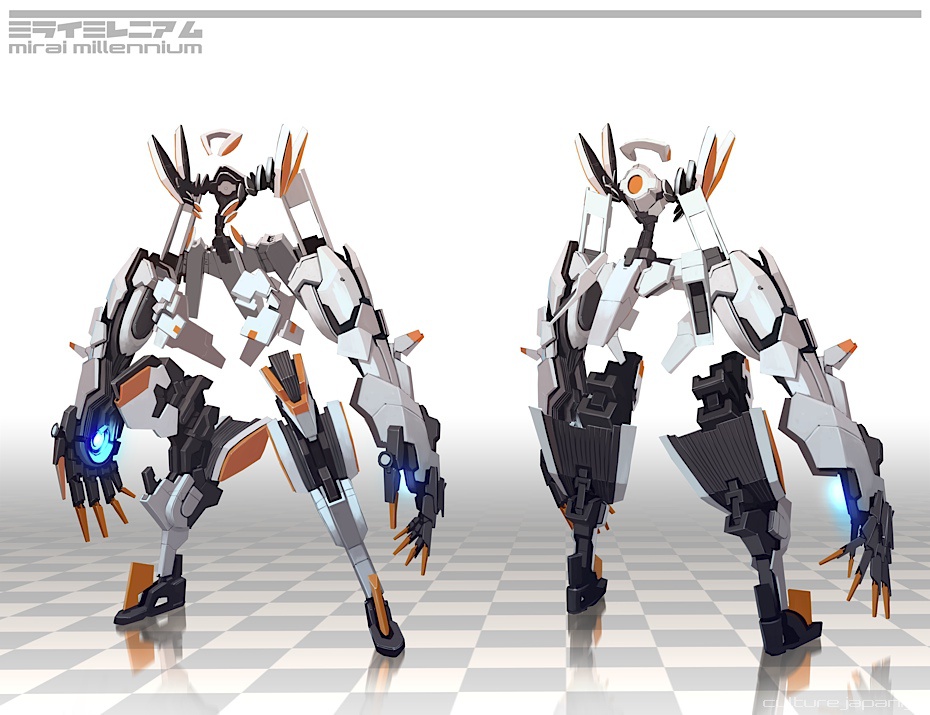 The Orgtanium boots enable free control of each leg while the arms are attached to the Spinal Unit. Inspiration of the suit came from Ripleys Power Loader and the Iron Man suitcase. 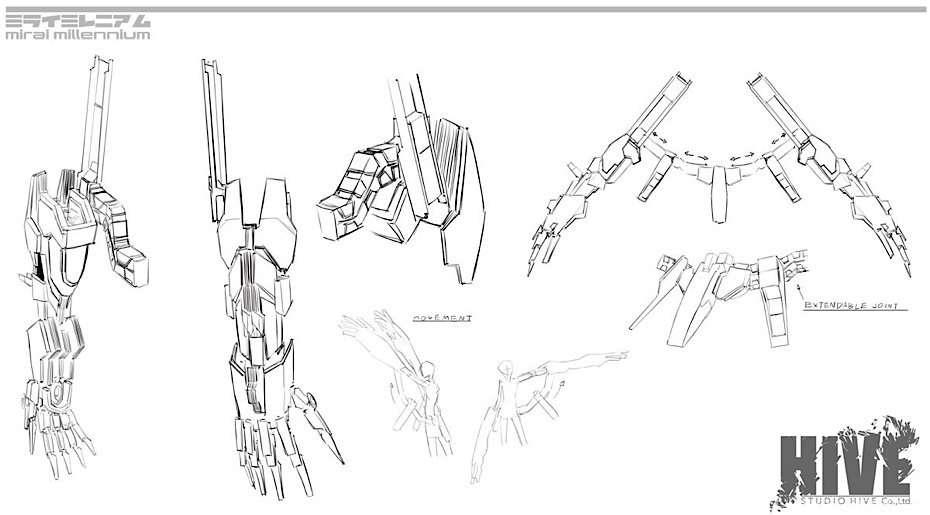 Some mechanics for the arms which extend from the Spinal Unit through the Elastic Titanium bands. 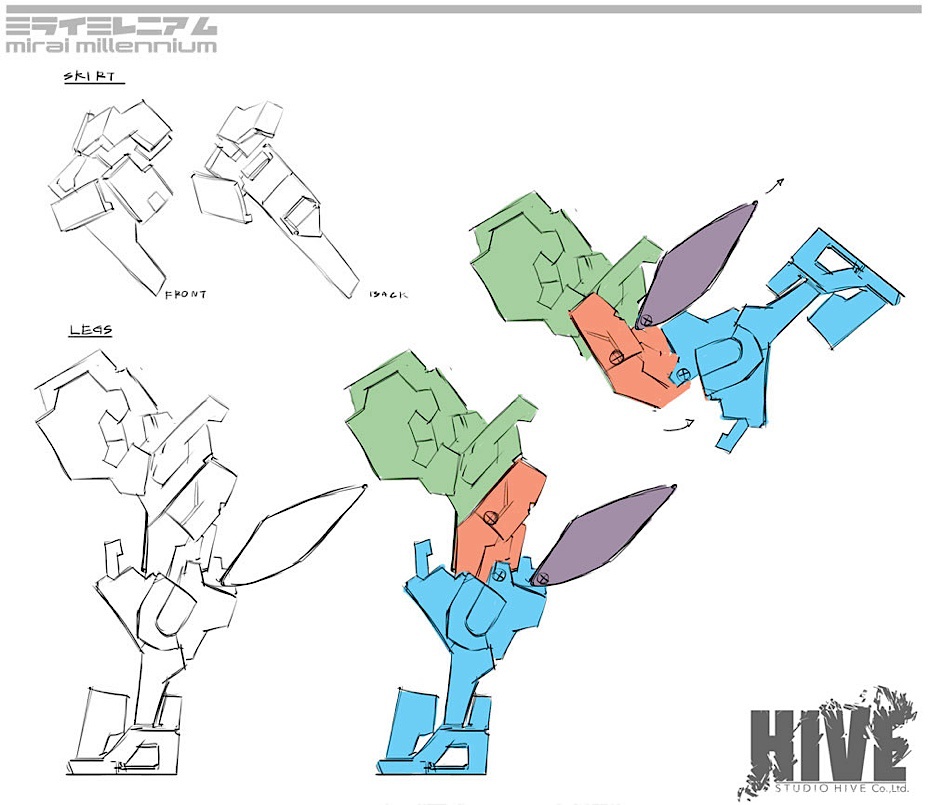 Mechanics for the skirt and legs of the Retrograde Suit.

Thanks to everybody on my Facebook who helped come up with the naming of "Millennium Blade" for Mirai's choice of weapon.
The blade is projected from the Sorunix Jewel embedded in the hilt. Sorunix is a rare stone mined on Sorunia. 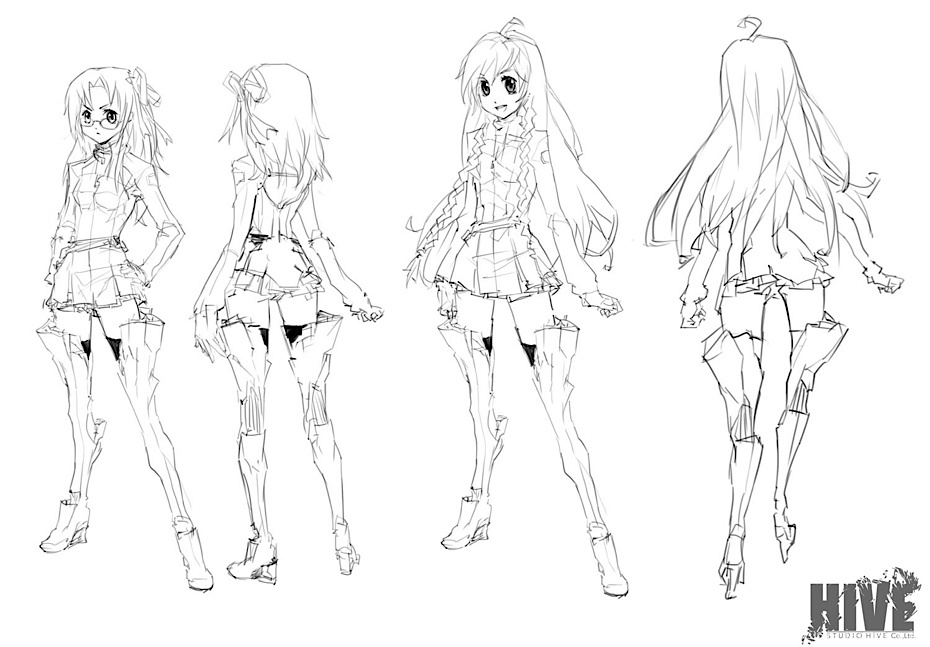 Initial sketches of the Solar Marine uniform. Skirt a bit too-I-spy-pantsu short.
Notes to folks doing commissions for me - do not use these sketches as reference material! Use the one introduced at the top of the post. 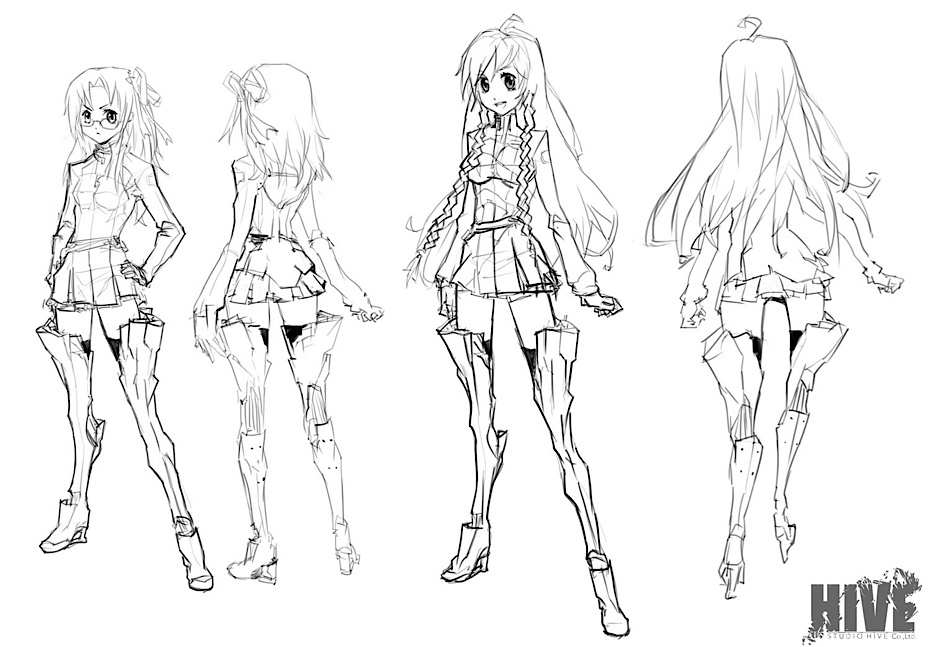 Skirt and legs made a wee bit longer. 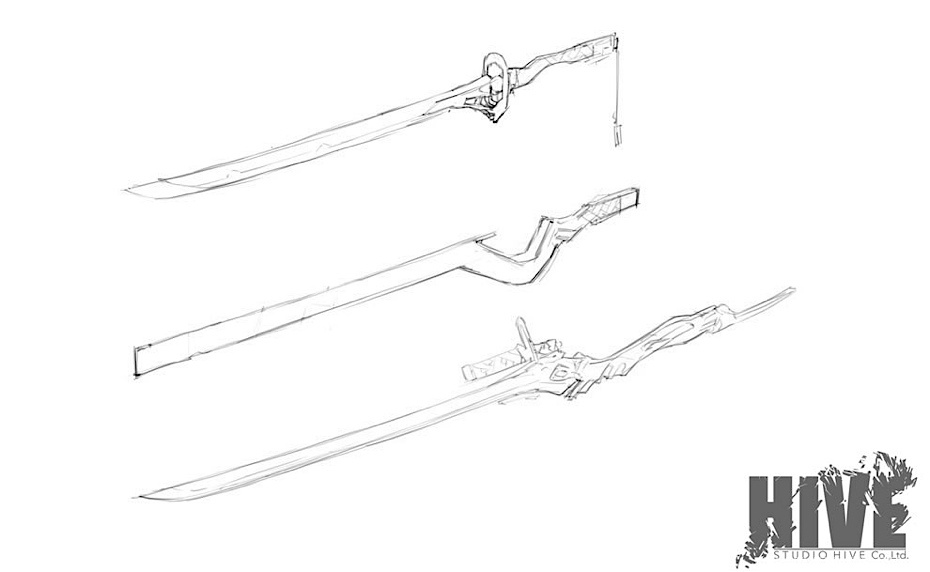 Initial designs of the Millennium Blade. 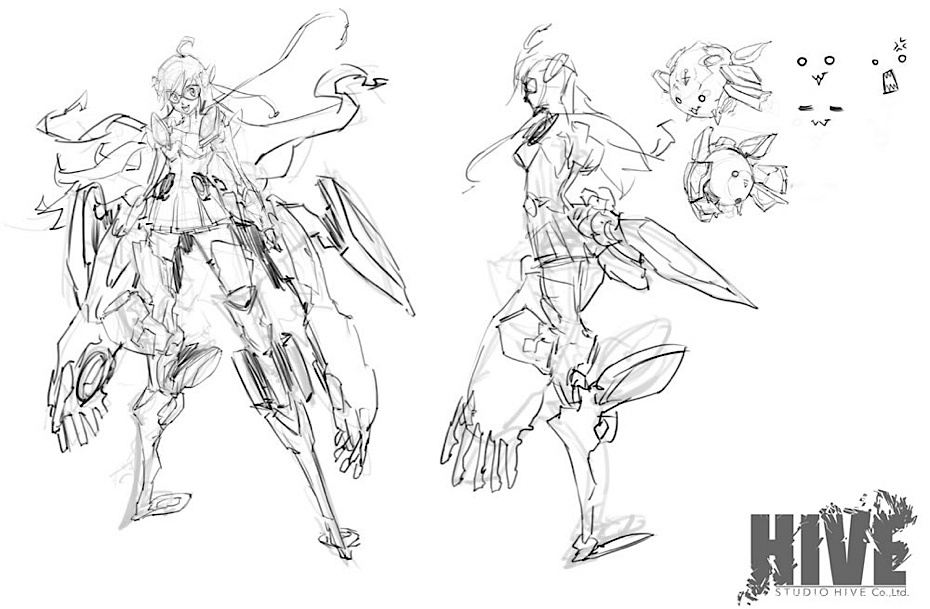 Initial designs of the Retrograde Suit. The first design had the pilot wearing goggles which I wasn't too fond of. Legs also a bit too thin too. 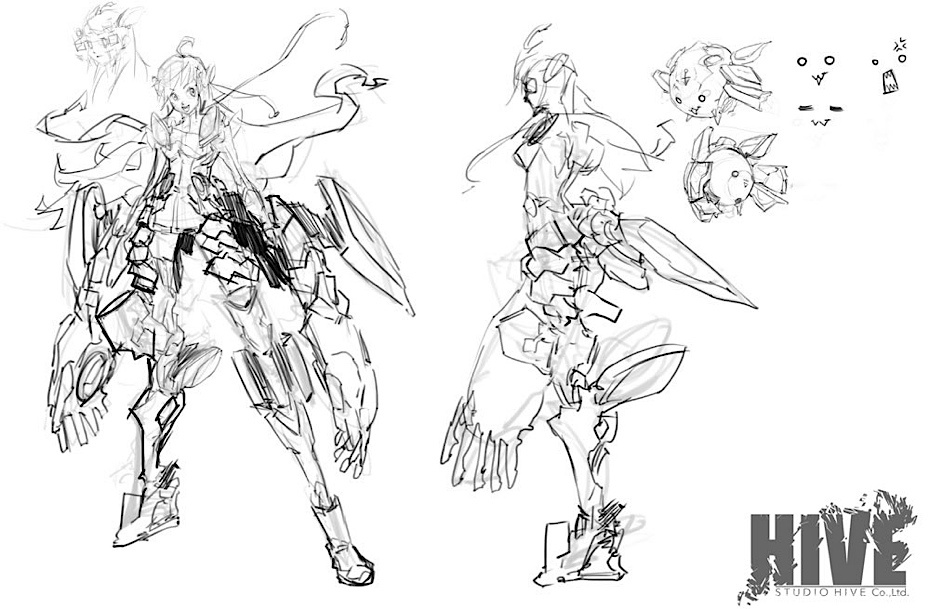 Feet made bigger and goggles removed. 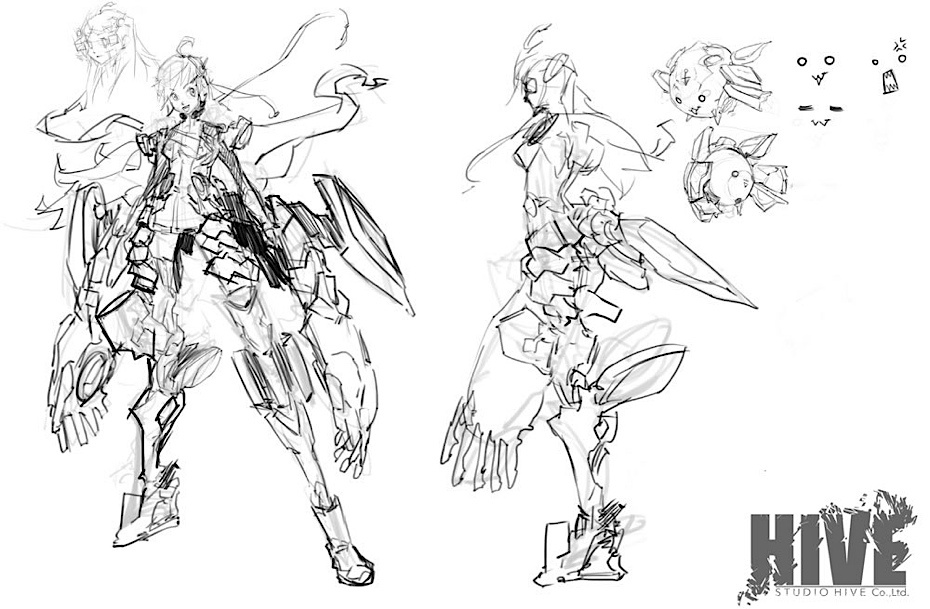 Final rough where we got rid of the headpiece. 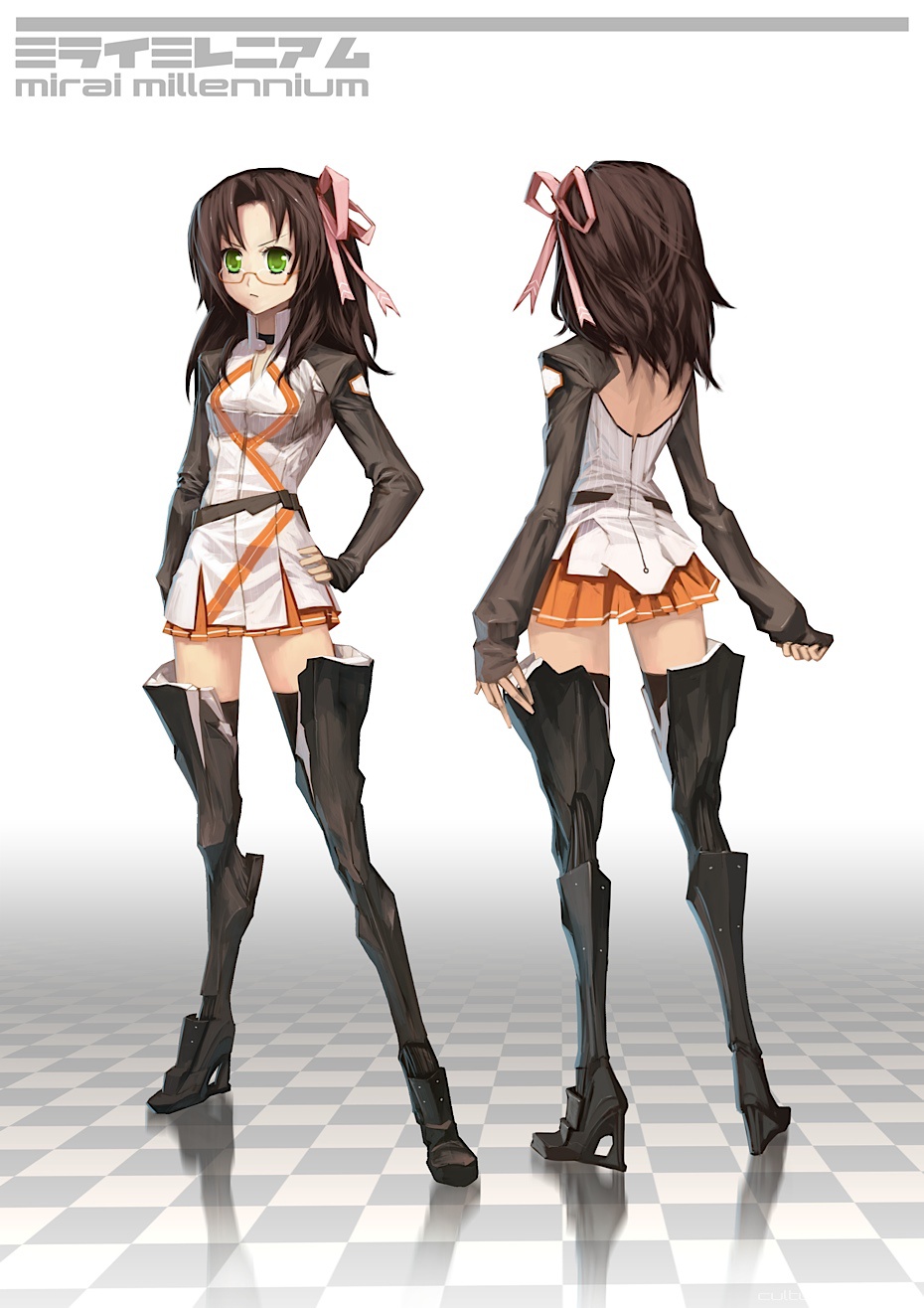 Solar Marine uniform for Kanata Hoshikawa. Notice that she has a different belt and uniform pattern design. 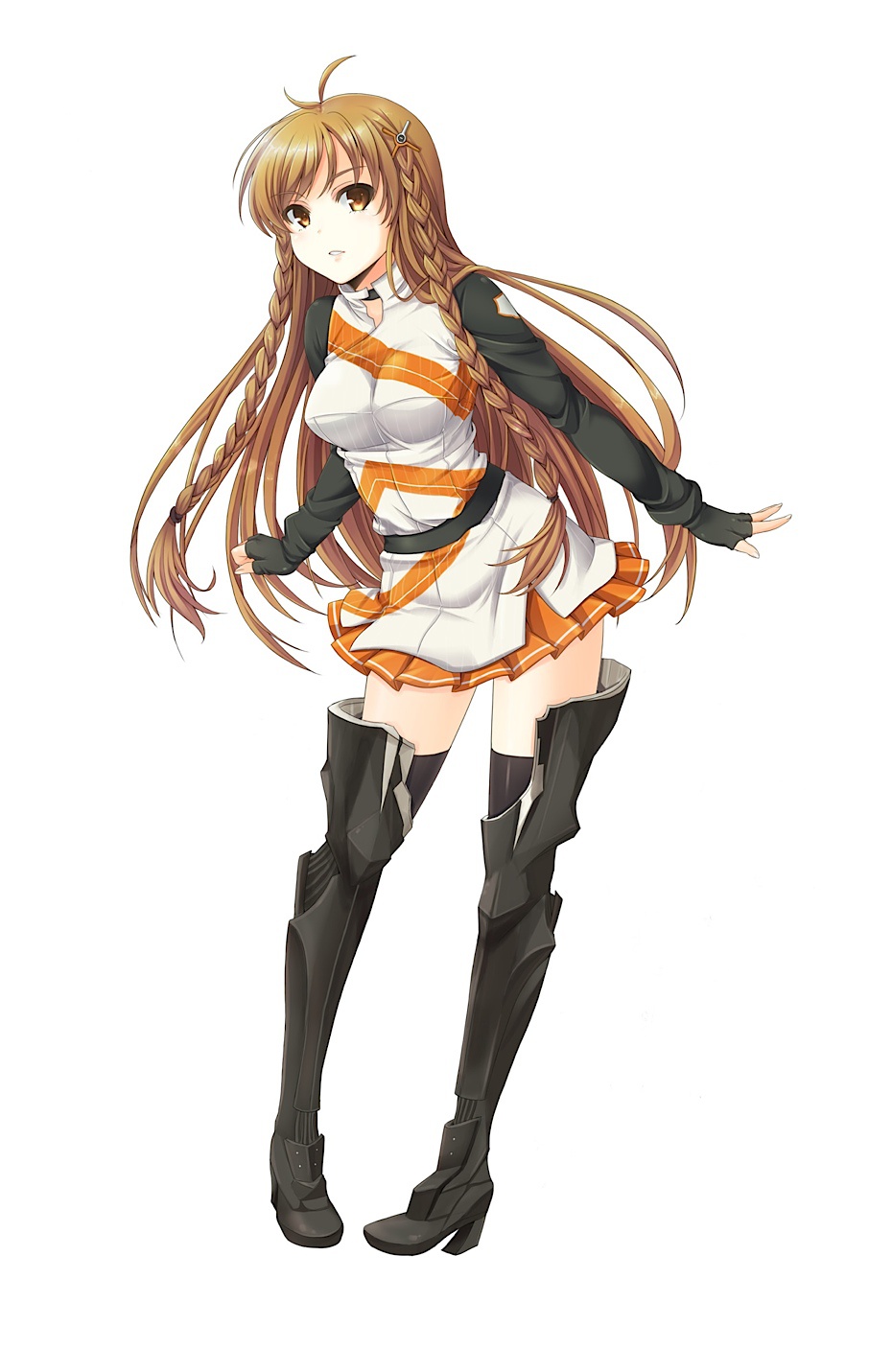 Now that the Mirai Millennium designs are complete, its time to start to work with various illustrators to extend the universe. The first designer I worked with was KKo. Still in the middle of developing the story though and want something ready by the time we broadcast the second season of Culture Japan TV. 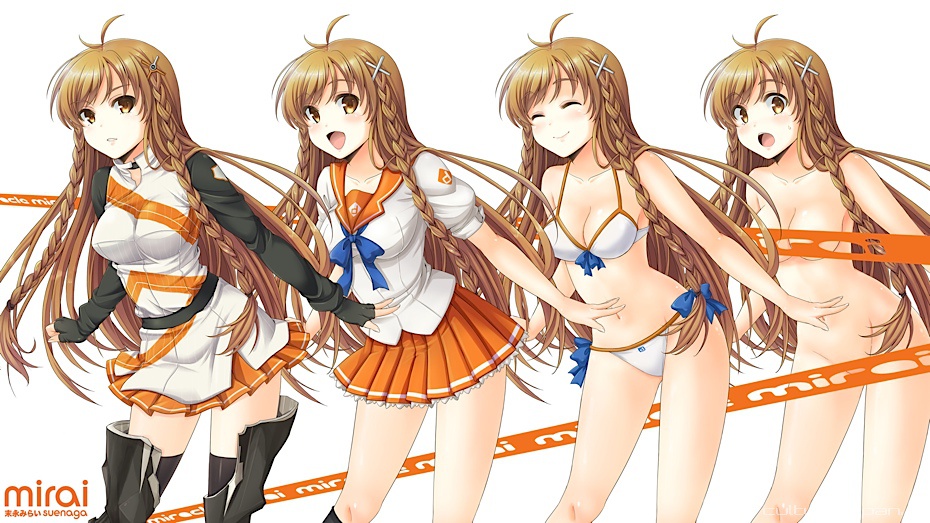 Variations on the artwork that KKo done for me. Larger 2560px x 1440px wallpaper version at Flickr. 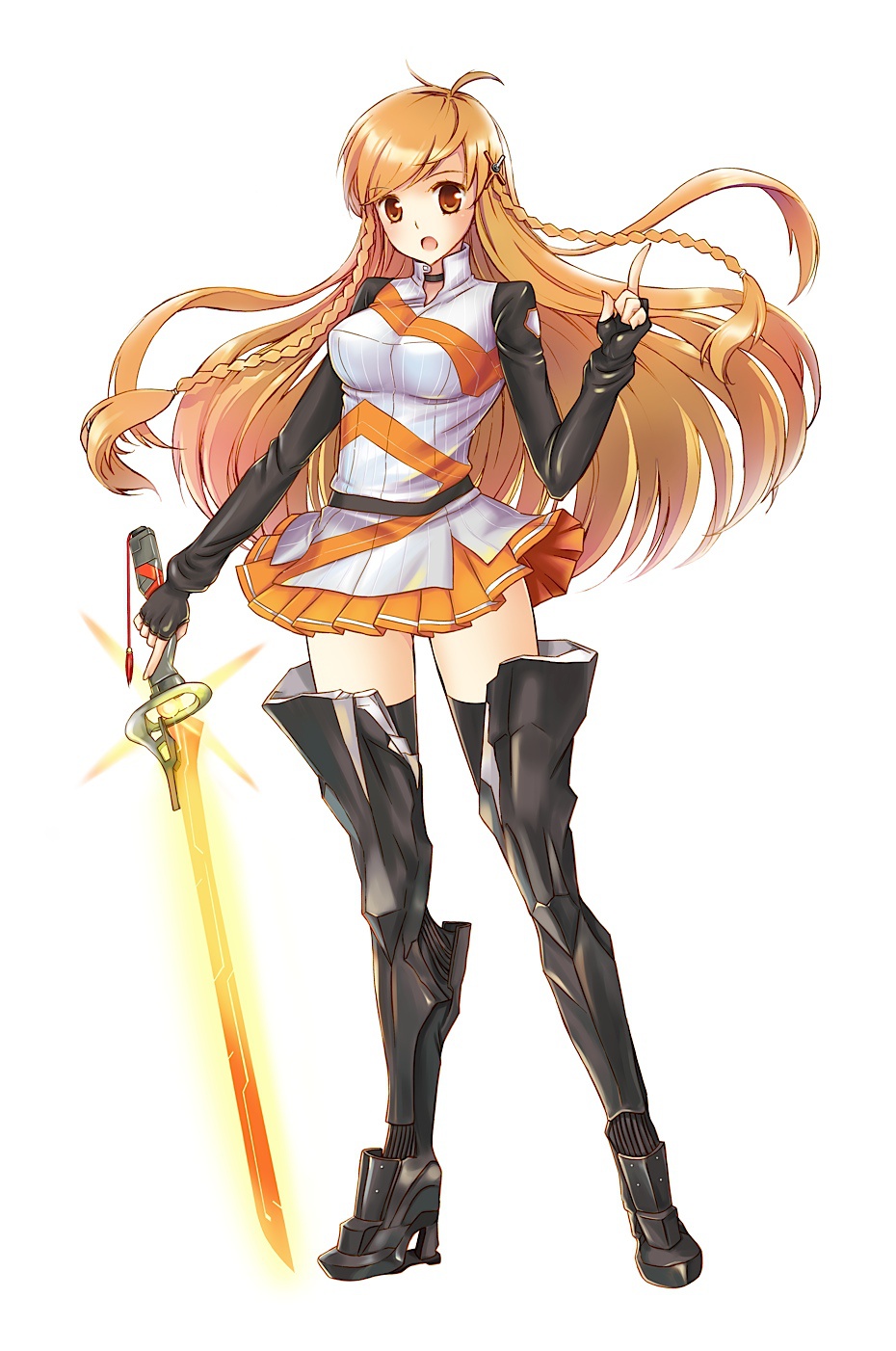 Original artwork by Azamiyuko and Solar Marine uniform by Chun. 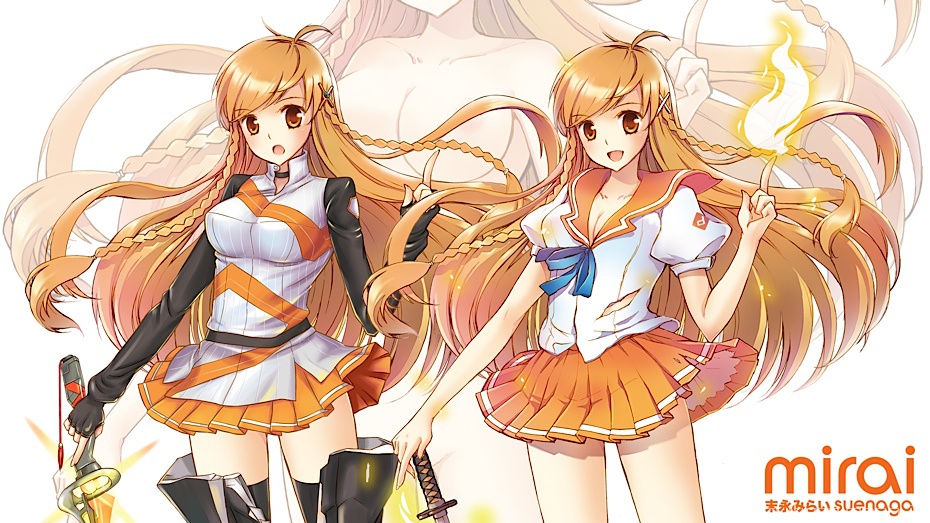 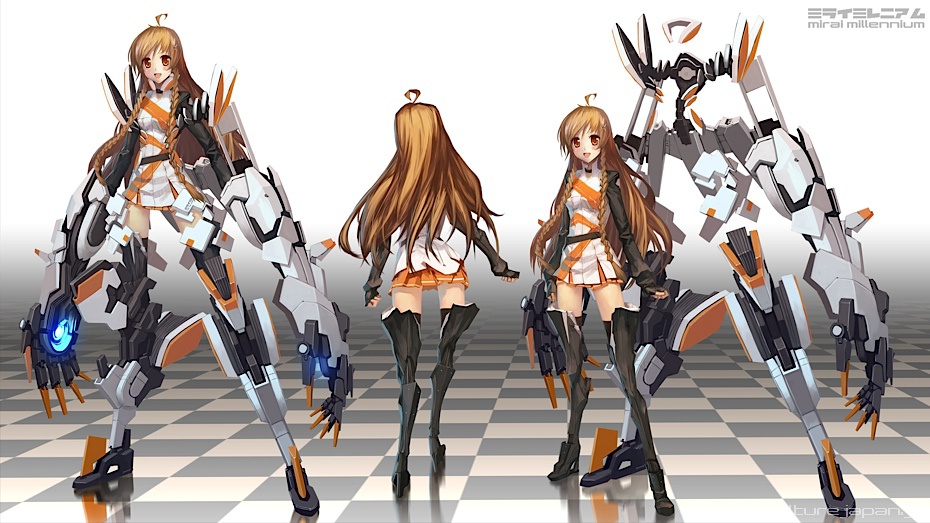 2560px x 1440px wallpaper version at Flickr.
I'll upload all the Photoshop files with transparency for you to play with soon. 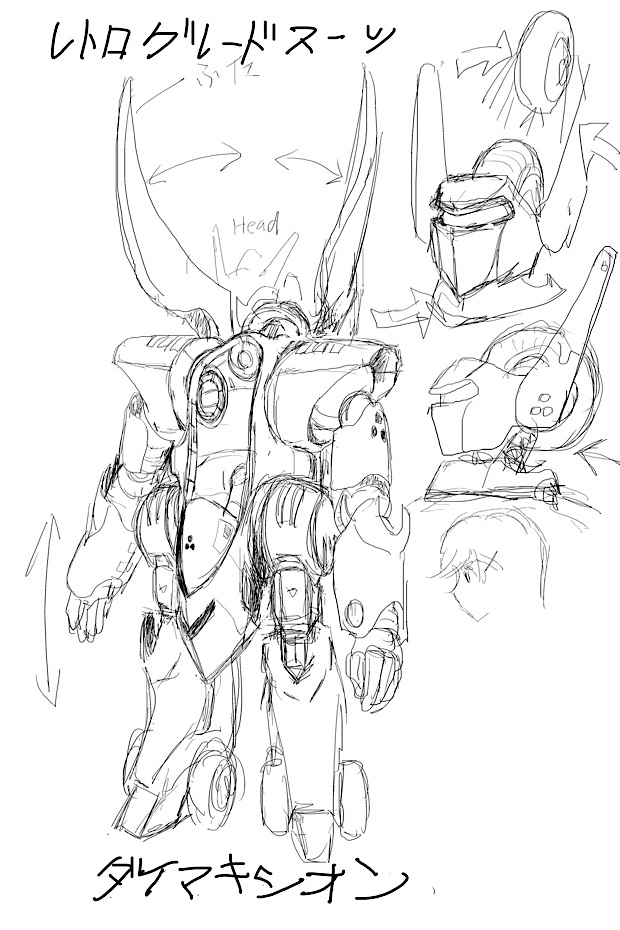 This was the initial concept art of the Retrograde Suit by Anin Tofu-san. 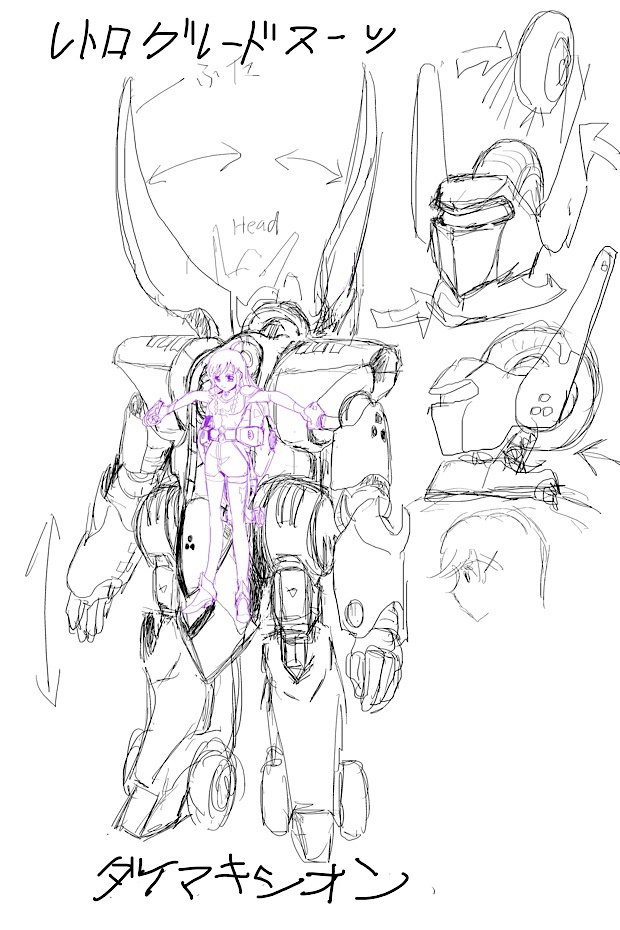 As you can see by Mirai being in place - tis quite a big suit - bigger than I anticipated. 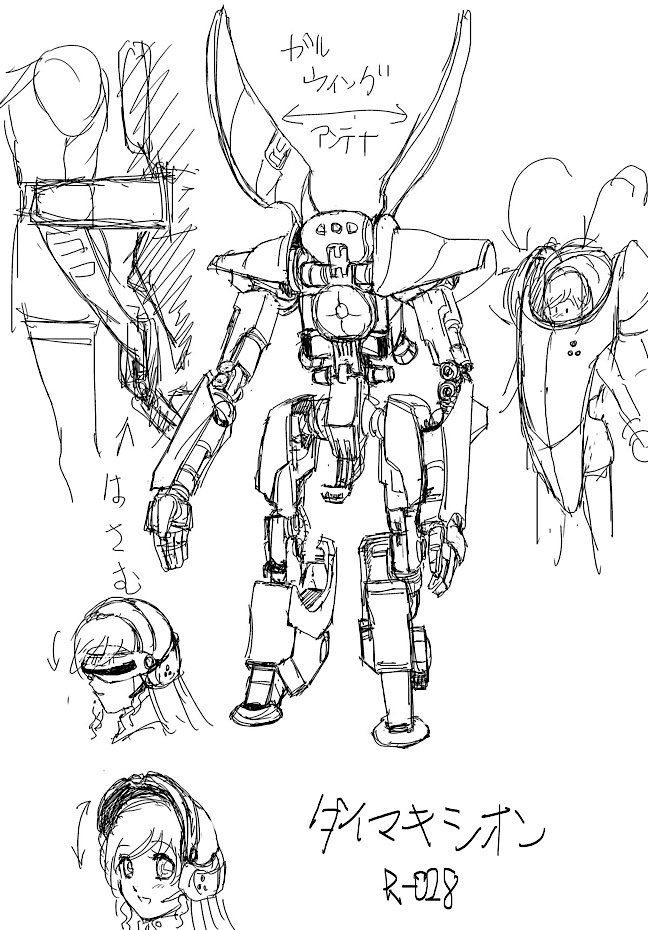 Suit redesigned to be smaller and more power-loader-ish. 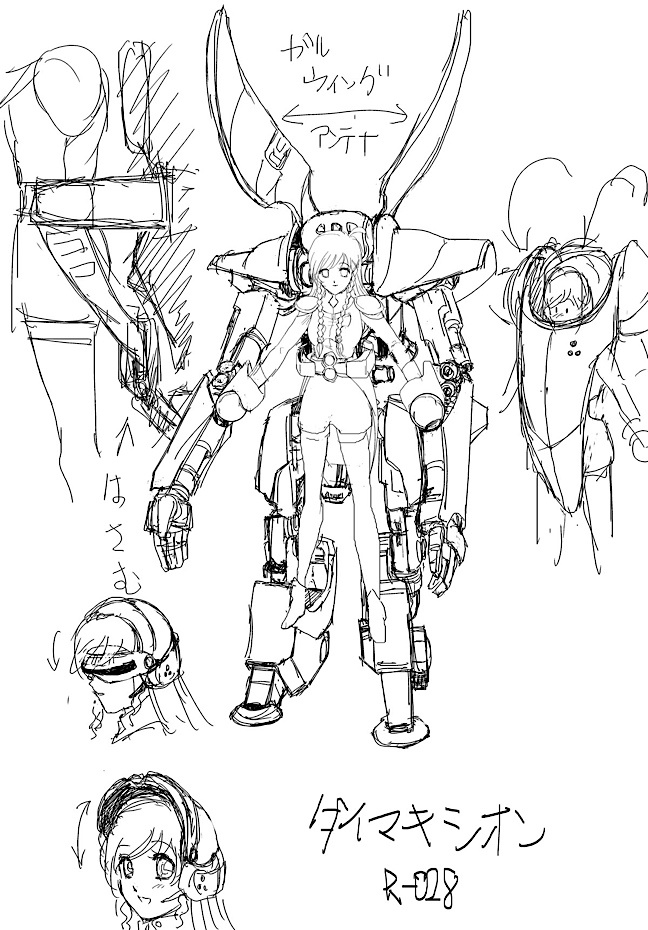 And this is what it would have looked like with Mirai in place.
More from the Mirai Millennium universe soon. 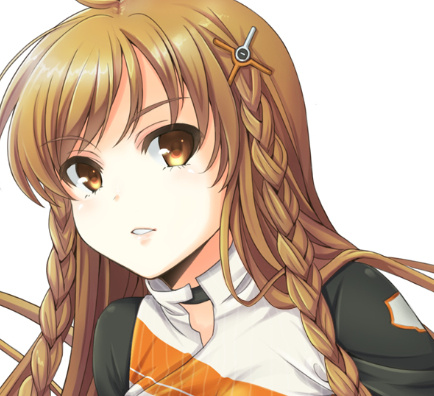