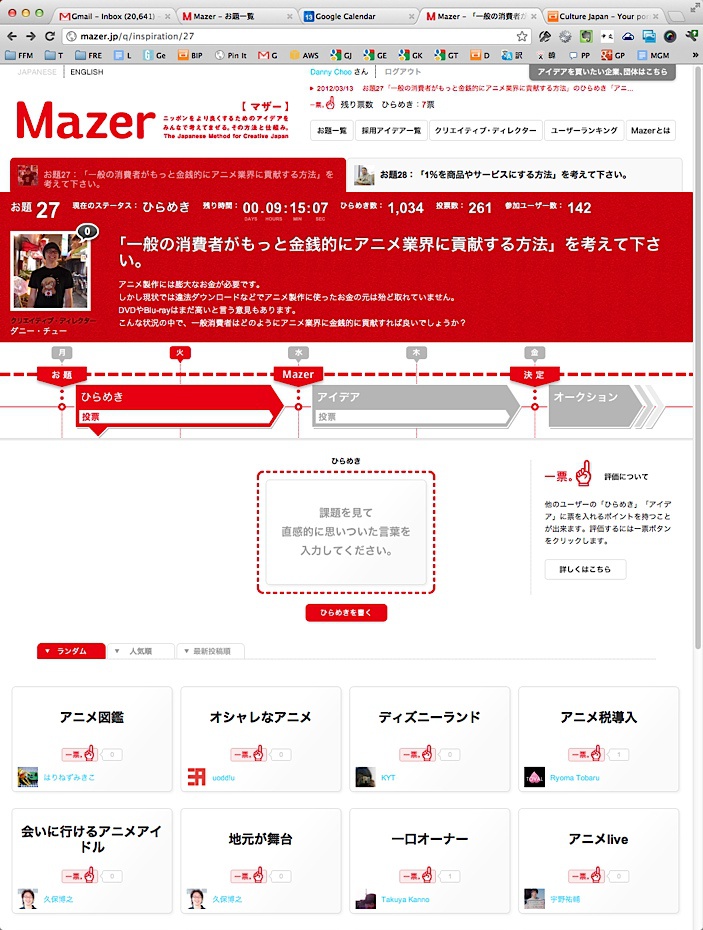 The Japanese Ministry of Economy, Trade and Industry (METI) has appointed me as Creative Director for a project of theirs called Mazer where I am leading a creative process on how consumers can contribute more to the anime industry.
As you know, its tough for anime companies to recuperate costs for all the reasons listed in this post.

Folks register on the Mazer and chip in ideas which I manage - I then fuse ideas together to form a method which can be purchased by a company who will have rights to materialize that idea into a product or service. The auction and thereafter process is managed by the government.
Folks who submit good ideas will also be recognized by the government which will lead to good things ^o^

One idea that a few folks submitted which I've also been thinking about too is to have a anime production fund which anime fans can contribute to - a bit like Kick Starter.

Folks would donate anything from 1 USD and depending on how much they donate, the donator would get some form of perk - name in credits or even a cameo. Companies would also be able to donate funds and get their logo in the anime somewhere - a bit like Tiger and Bunny.

The anime production would go ahead when the fund goal is reached. To give you an idea of how much funds can be raised - this project on Kick Starter raised over 3 million USD. I guess this is like looking for investors for a project but on a wider scale.

What other ideas do you have for consumers to contribute to the anime industry? Would you donate funds to an anime production budget? If so what sort of anime would you like to see made?