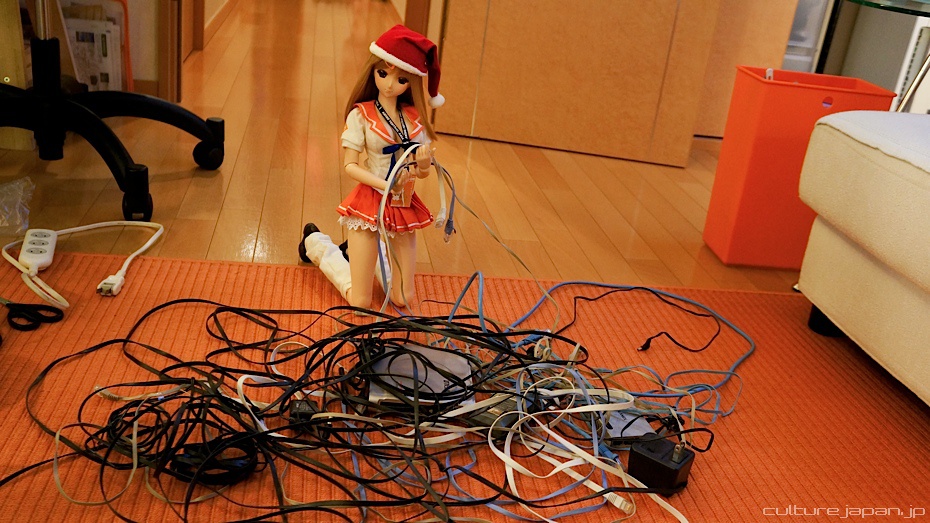 Had been using our Buffalo wireless router for a while now. Since then a load of new wireless standards came out which provide higher networking speeds. As the wireless speed of the old router was slow, I kept most of our macs in the house wired via LAN cable.

It was time to get a new router and get rid of those cables - I even had a cable running up the side of my house outside the window ^^; After removing all the LAN cables from around the house, this is what I was left with - 202 kilometers with of cable and dust. 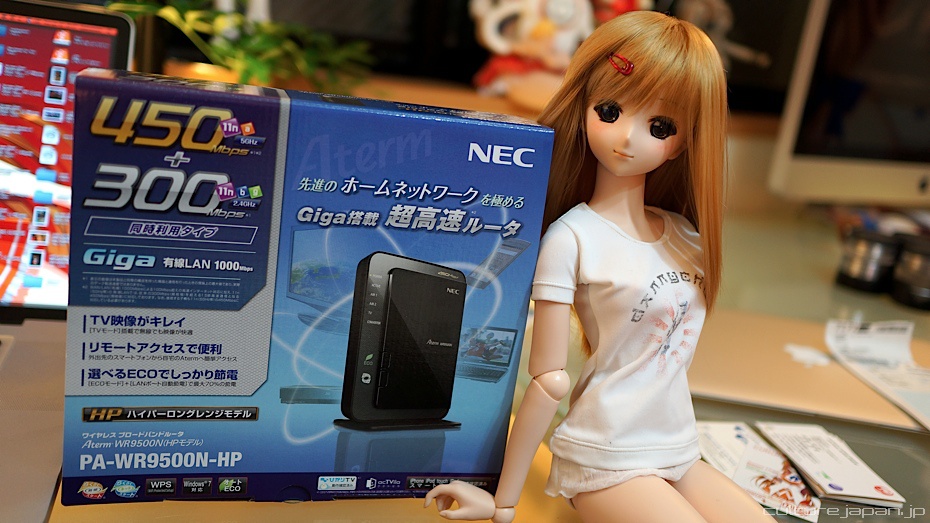 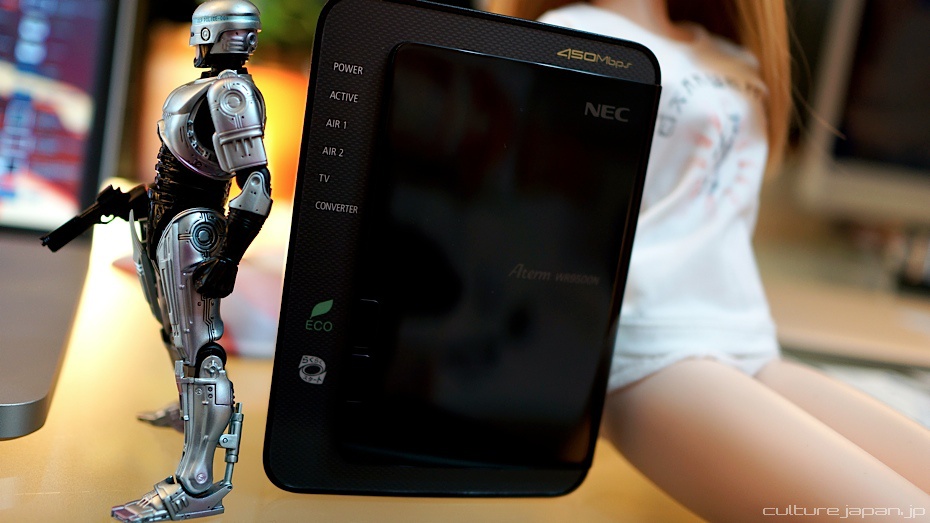 Tis surprisingly small. While the wireless speeds are not as fast as the wired, the hassle of keeping everything wired was too costly in terms of time management for me. 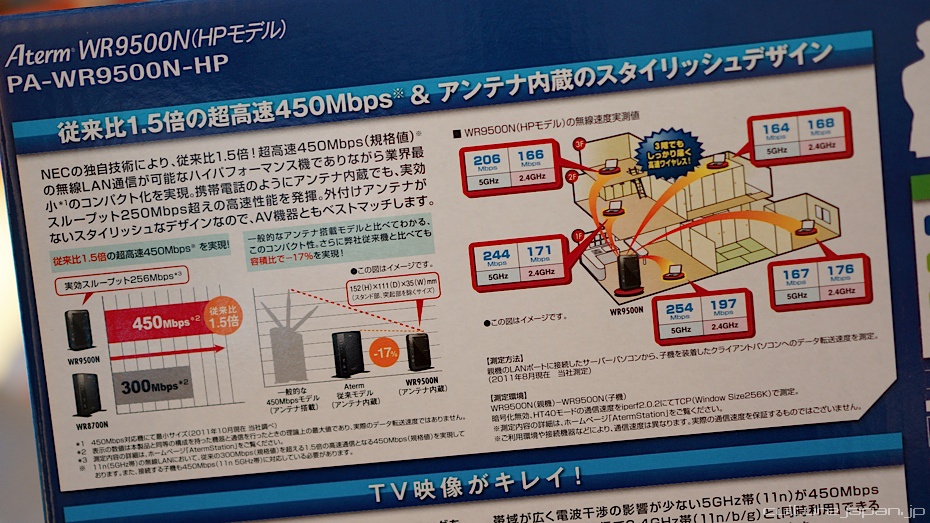 The new router kicks 7 shades of poo out of my old one. The WR9500N supports speeds of up to 450Mbps over the wireless network and maintains a good signal throughout all 3 floors of my house. 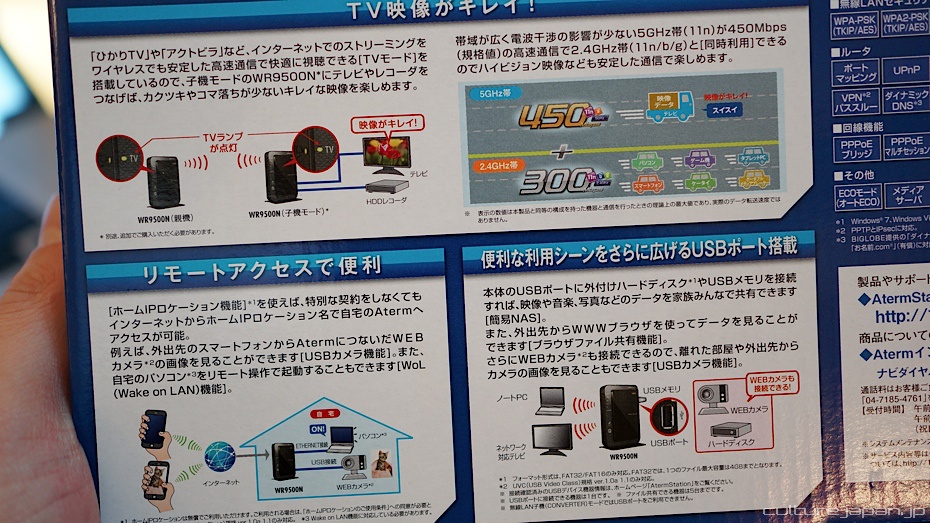 The WR9500N comes with all the standard features that we expect from a wireless router these days. You can attach any HDD to the router and the files on that HDD will be available on the local network. Devices that support DLNA can browse any media files on the HDD too.
You can also attach a webcam and access that from outside the network on WAN. 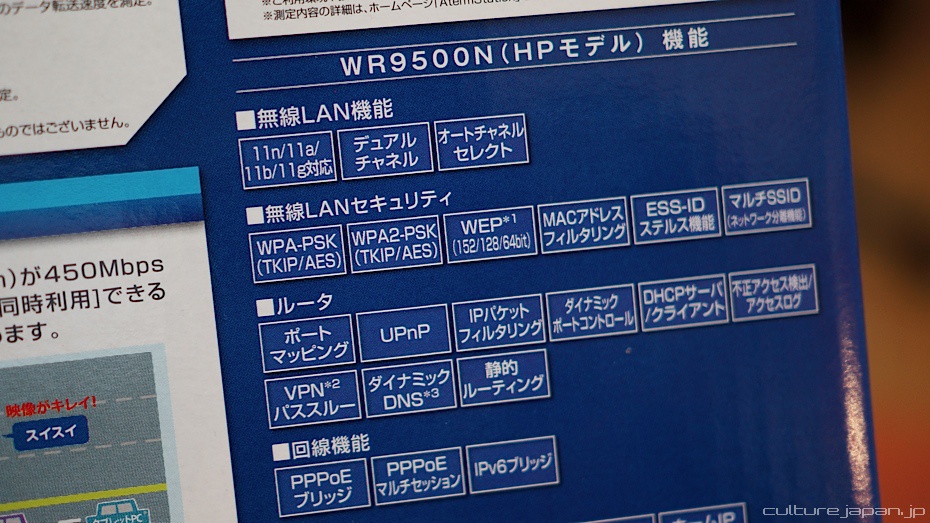 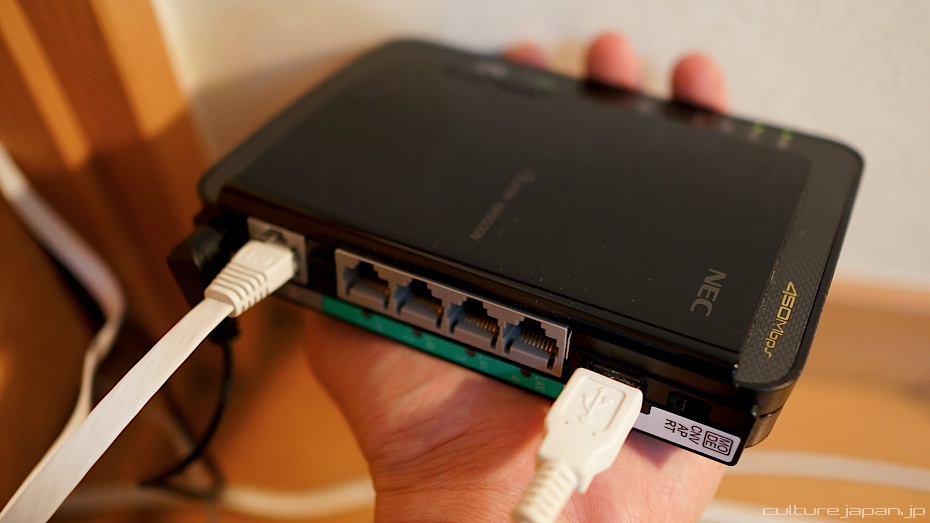 Nice n compact. Comes with a stand so that you can keep it either upright or on its side. The USB cable you see here is attached to a HDD - no need to have an extra machine just to serve up files on the network.

Most pleased with this purchase - bit on the expensive side compared to other wireless routers but certainly worth it. 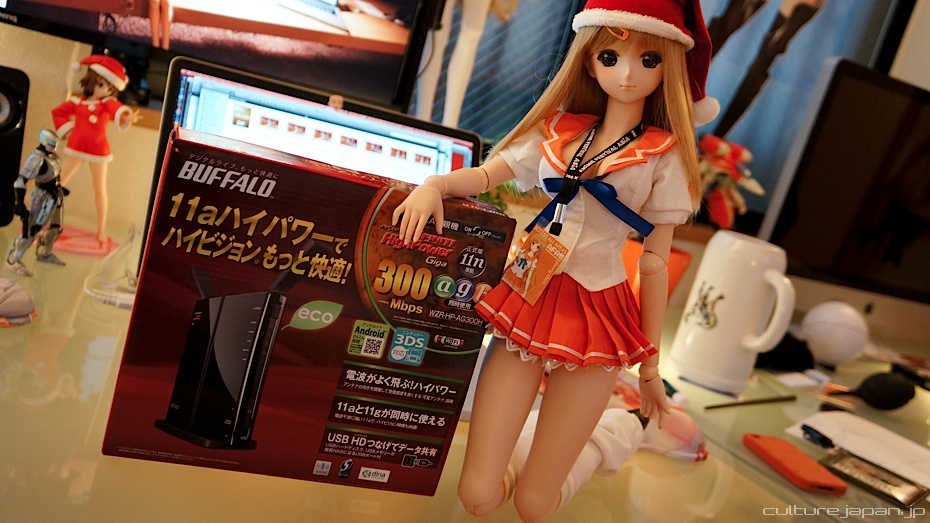 But before the NEC router, I went for the Buffalo WZR-HP-AG300H. I chose Buffalo because I had been using their wireless routers for many years. 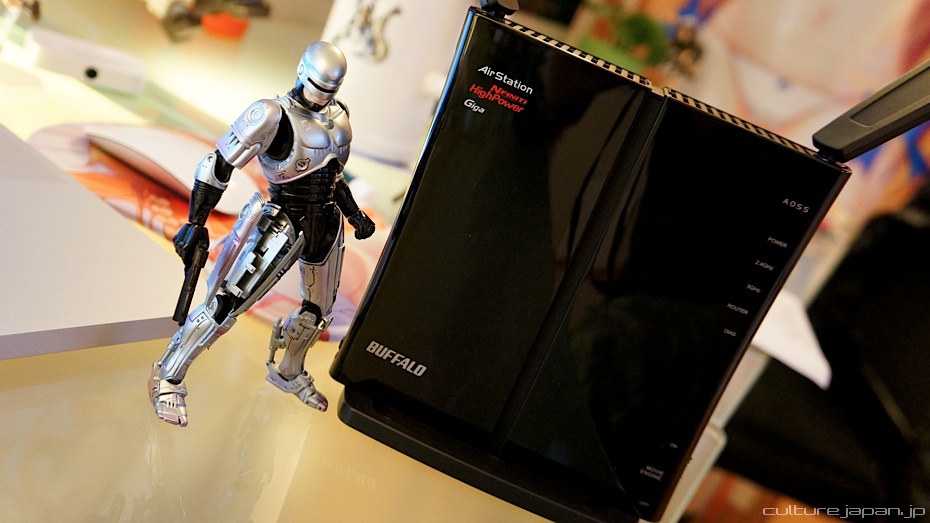 Compared to the NEC WR9500N, the Buffalo version feels light and tacky - not too bothered as long as it does the job though - but it didn't do its job!
The Buffalo WZR-HP-AG300H kept on dropping the connection. Went to google the reason and as I was typing in "WZR-HP-AG300H", the first suggestion was "WZR-HP-AG300H 途切れ." ] in this case means "dropped connection."

Seems that many others have the same problem. There were suggestions to change the channel from an auto to a manual setting but that didn't do any good.

Rather than waste any more time with the Buffalo, I asked comrades on my Twitter who recommended the NEC. 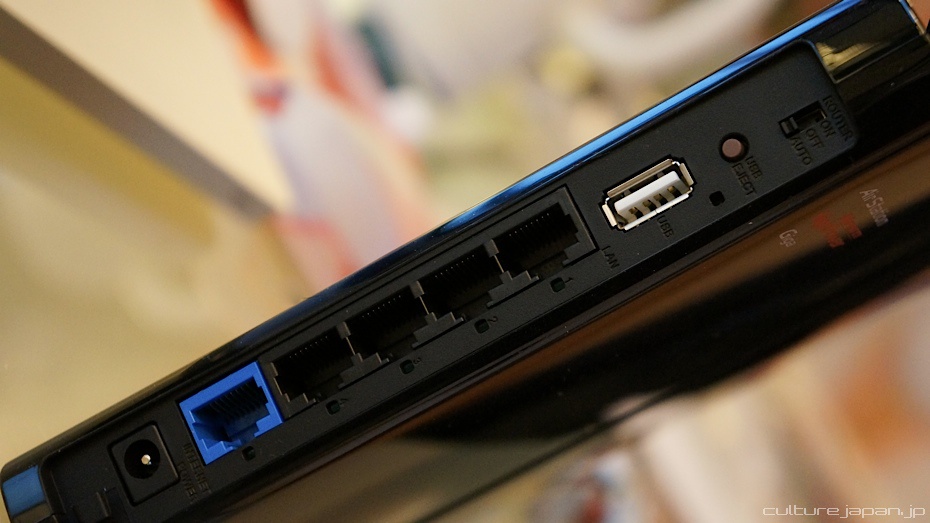 The back of the Buffalo. Just like the NEC, its got a USB socket to attach a HDD to serve up files on the network. But it was hideously slow - after browsing to a directory, I'd have to wait quite a while before all the files are listed. The shared files on the NEC however list pretty much straight away. 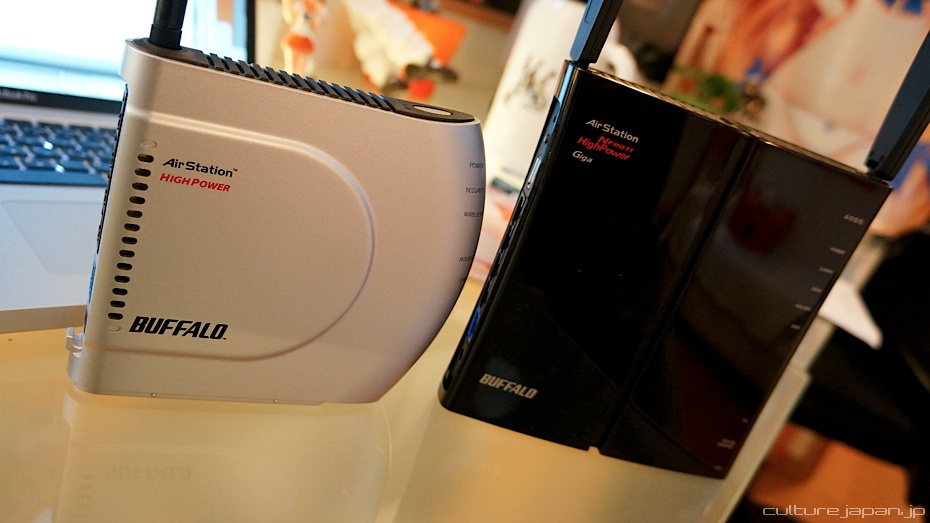 And the old Buffalo router on the left.
What brand of wireless router are you using? 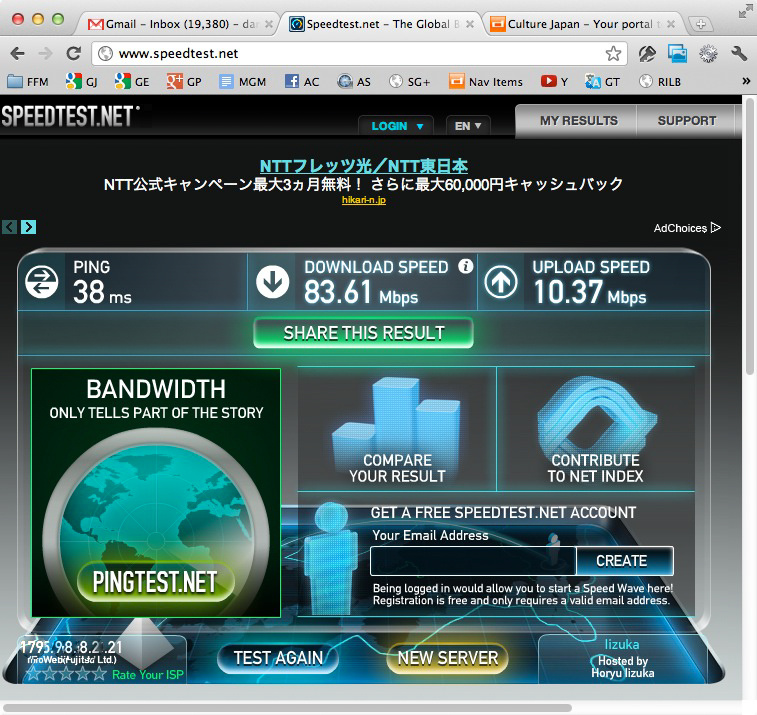 And here are my Internet speeds over the wireless network - 83.61Mbps/down and 10.37Mbps/up - the upload rate is usually much higher though. Currently pay about 6000 yen for the connection. My provider is Nifty and the optic cable is provided by NTT.
What sort of connection do you have and what are you paying for it? 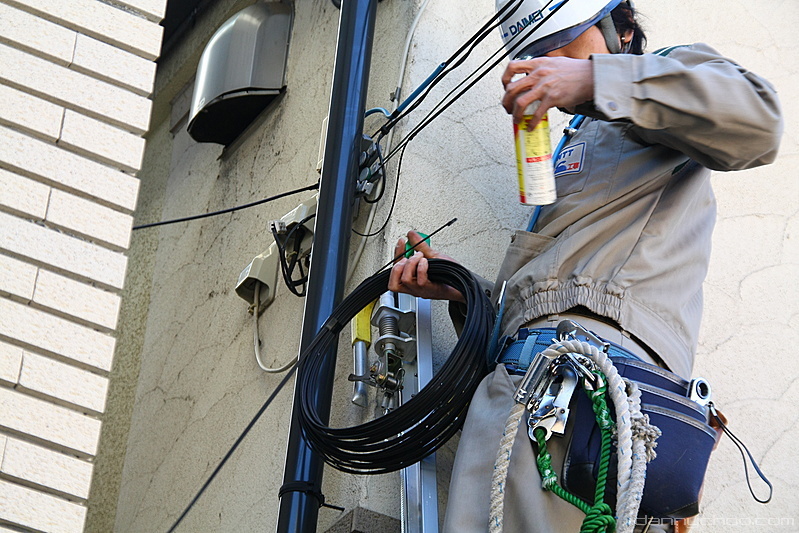 This gentleman in the middle of installing a second Optic Fiber connection to our house (you can see how it was done in this post) - one for private and one for business. This was a few years ago though when I was serving figure.fm out from my home ^^;