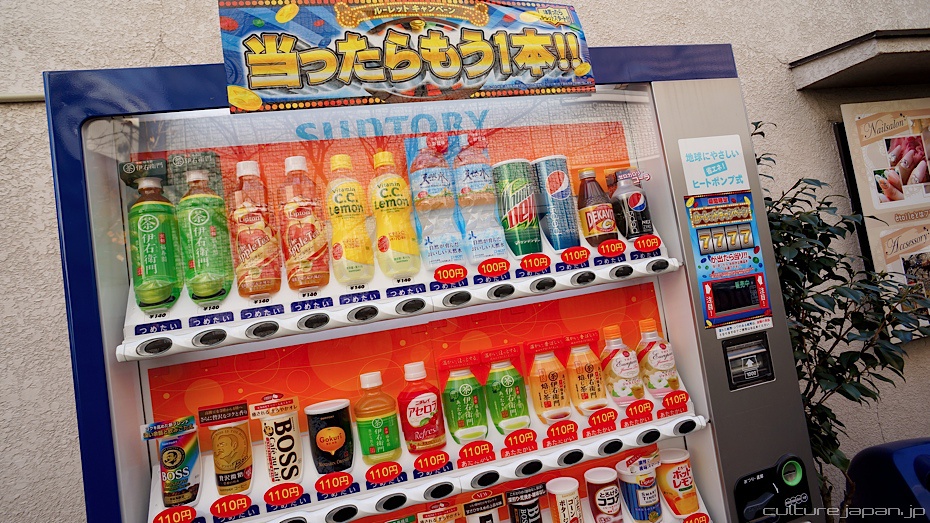 Did you know there are 2 situations where you can get free drinks from a vending machine in Japan? One situation is where you have to first buy a drink from a vending machine that has what they call a "roulette" feature.
The banner on the top of this machine says "strike lucky and get another can!" . But even if you cant read Japanese then all you need to look out for is the 4 sevens printed in slot machine style which you can see to the right on this machine.

All you have to do is stick in your money and depending on the type of the machine, the lights under the drink select buttons will start to flash in sequence. Depending on your luck and when you press the select button, the led located on the right of the machine will show 4 sevens in a row. If this happens then you get to choose another drink of your choice (regardless of how much it costs) but you need to choose within 30 seconds.

Drinks manufacturer Dydo explains that they have this feature as a way to thank their customers. 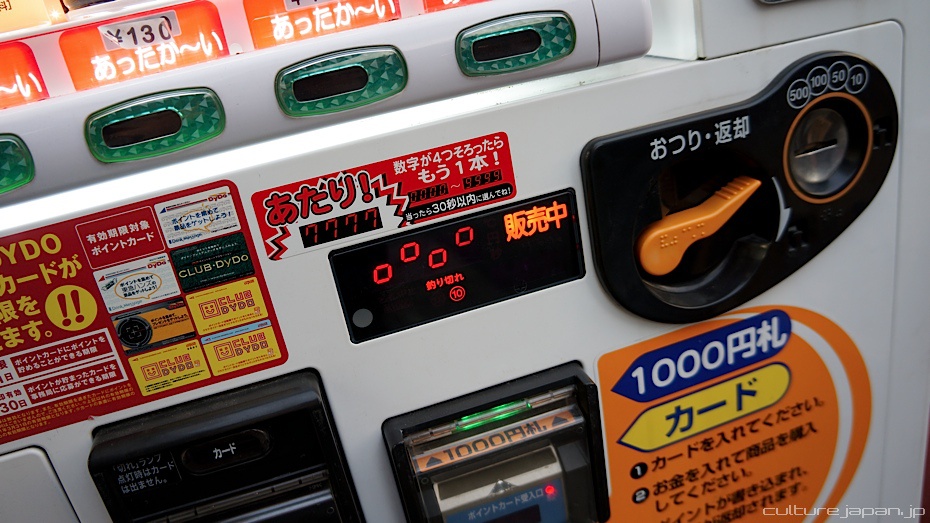 This is another machine with the same feature - again, even if you cant read Japanese, you should be able to recognize the "7777". After buying a drink, if all 4 sevens line up then you get to pick another drink - make sure to do so in 30 seconds or you may cry.

On the display you can see the number 10 in a circle. The words above say "out of change" ] so if you are buying a drink and are expecting some 10 yen coins back then...well you wont be getting any because it has none ^^; 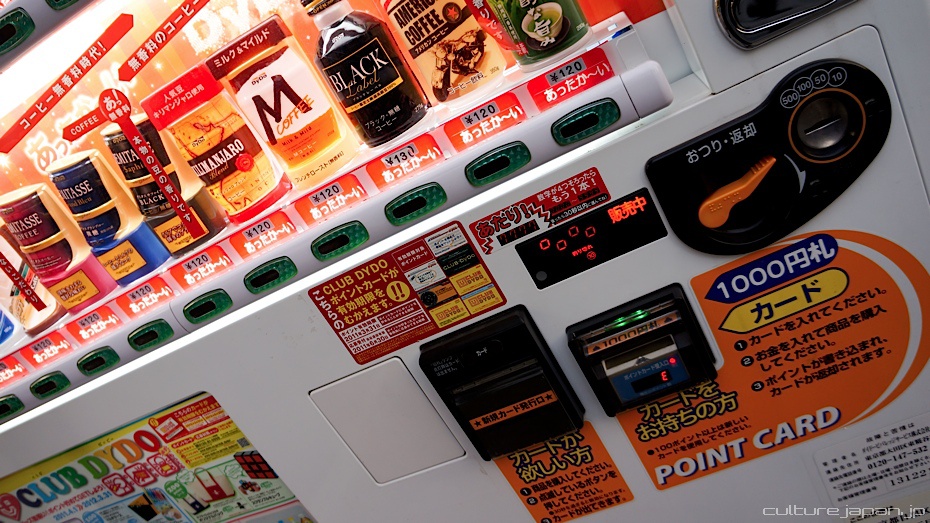 This is a Dydo machine where you can earn points as you buy more drinks. The points can be exchanged for various goodies like these.

Not all vending machines will have numbers in slot machine style - sometimes it may be different characters like chicklets. The videos below show folks who have struck lucky and won themselves another can. 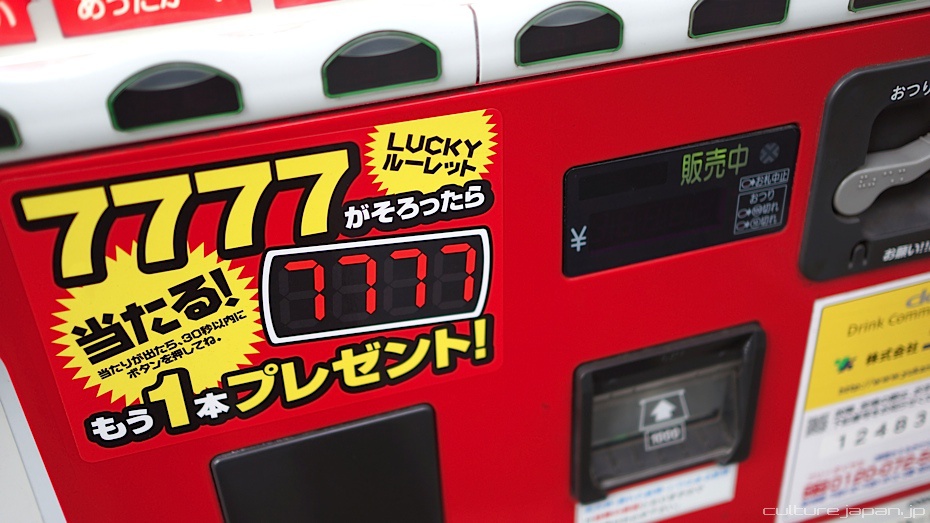 And here is another machine with the "Lucky roulette 7777."

The other way to get free drinks from a machine is in a situation that you probably dont want to be in - during a major disaster like the 2011/03 earthquake. Many vending machines are equipped with a feature that serves up free drinks during a disaster. This setup is an example of how multiple vending machines would be triggered to release free drinks by the owner of the machines.

As explained before, vending machines can be rented by anybody. In most cases, vending machines are owned or rented by jon doe and not necessarily a drinks manufacturer. It is up to the owner to decide if they want to activate the feature but I heard that during the 2011.03 quake that many vending machines had the free drink feature activated.

I love Japanese vending machines - they are everywhere and well serviced - unlike the ones which I used in the UK - you never really know if you are going to get something back after you stick in your money ^^;

What are vending machines like in your neck of the woods? 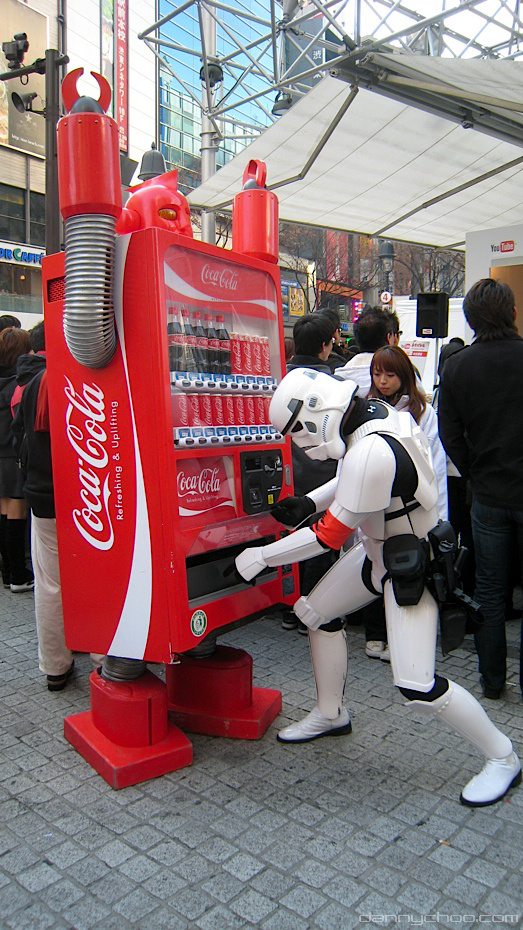 I forgot about a 3rd way to get free drinks from a Japanese vending machine - tickle its nuts and bolts.