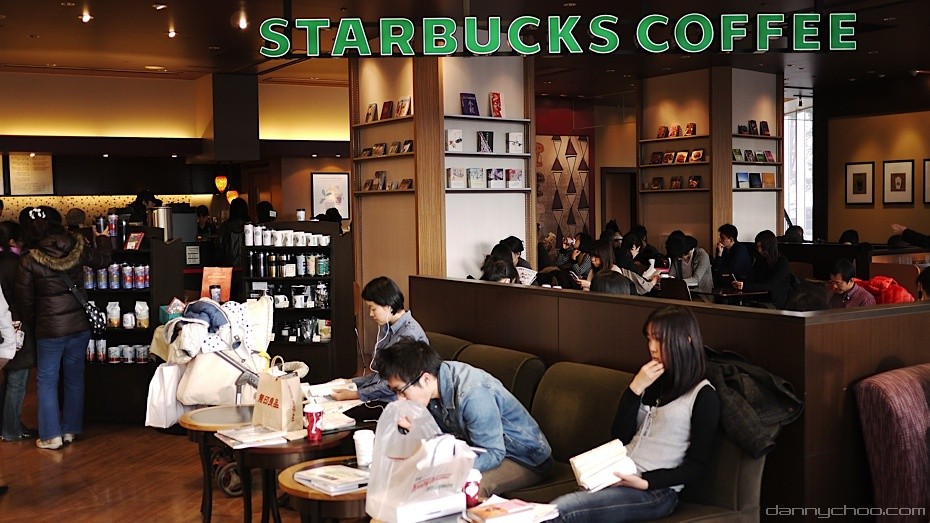 I get asked a lot by visitors who come to Japan - "How come there are so many coffee shops?!"
Today I'd like to share some history on coffee in Japan and talk about Japanese coffee culture and why I'm drinking more of it of late.

The first coffee that was consumed in Japan was done so at the end of the 18th century by Dutch folk who were resident at Nagasaki at the time but it wasn't until the end of the 19th century when coffee bagan to be imported in bulk.

The first coffee shop opened in Tokyo in 1888 and while coffee culture started to spread, import restrictions during and after World War II meant that the culture didn't really take off. 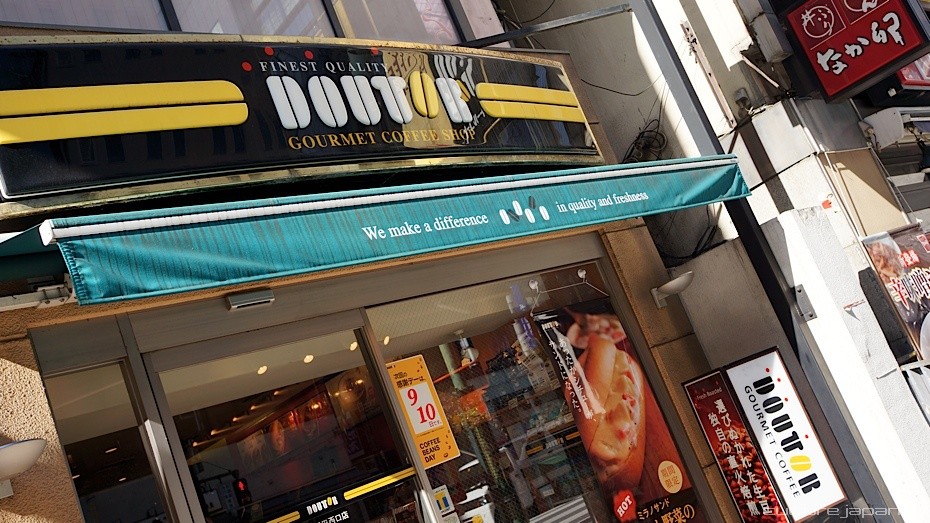 After import restrictions were lifted in the 1960's, coffee imports started to increase - a significant increase being in the 1970's.
In 1980, the Coffee shop franchise Doutor opened its first branch in Harajuku and since then have grown to have 1490 shops across Japan. 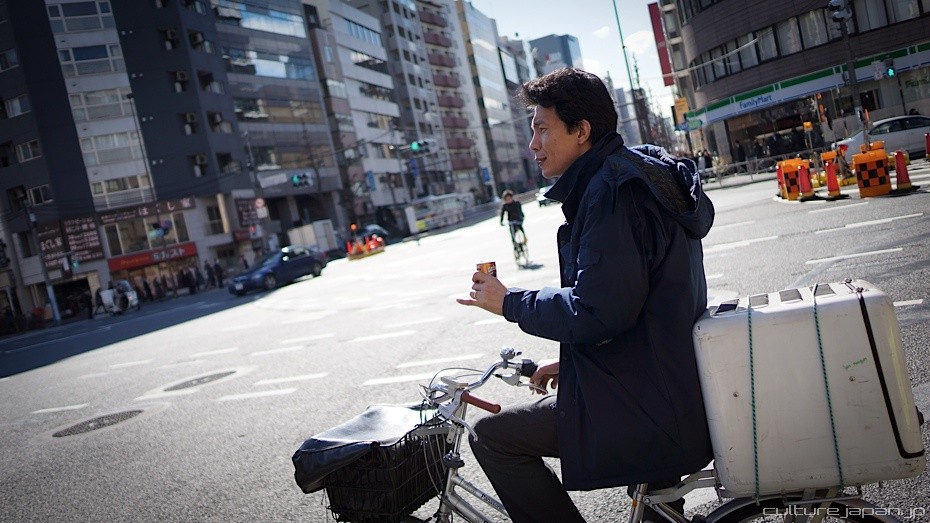 Canned coffee (hot or cold) can also be bought at many of the 5 million vending machines across Japan - and you know coffee is big business when they have Tommy Lee Jones advertising it in Japan. 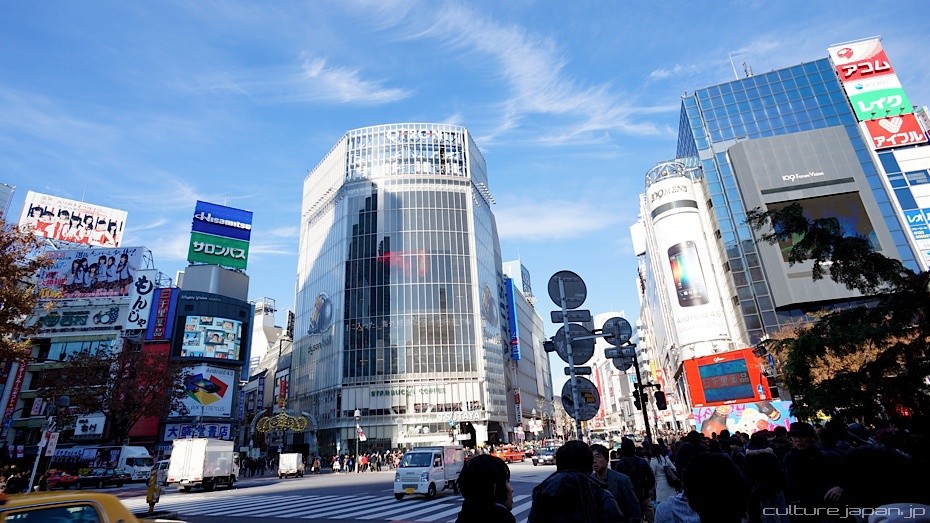 The Tokyo Ginza branch of Starbucks which opened in 1996 was their first step out of the US and thanks to the success of that, Starbucks then started to roll out their brand worldwide.

Japan is traditionally a smoking culture and one is always hard pushed to find an establishment with a non-smoking area.
Starbucks decided to do it the American style and kept Starbucks in Japan a non-smoking environment and is one of the few places I can go without having the pleasure of breathing in smoke which aggravates my asthma ><

The interior design of Starbucks was very different to what Japan has had up until then. These variables and their lovely tasting coffee contributed to their success in Japan and in just a short time, they now have 1000 shops across Japan.

Starbucks was very clever choosing this spot at the Shibuya crossing - not only is it easily accessible, folks can easily identify it and even if folks are not interested in having a coffee, the branding space alone is probably worth the unthinkable amount of rent they are paying for that spot ^^; 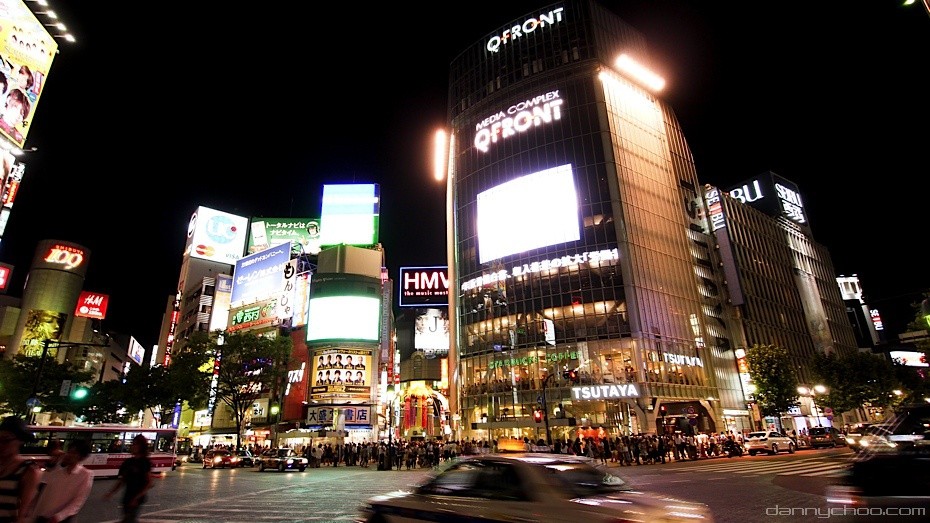 Shibuya crossing by night with the prominent Starbucks branding. 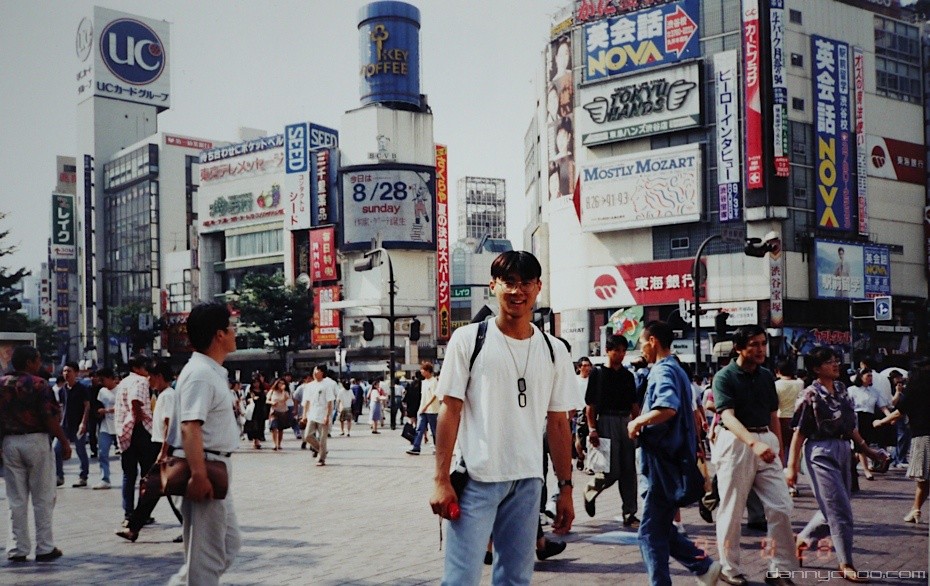 Shibuya back in 1994 during one of my first trips to Japan - used to be a bank where Starbucks is now. 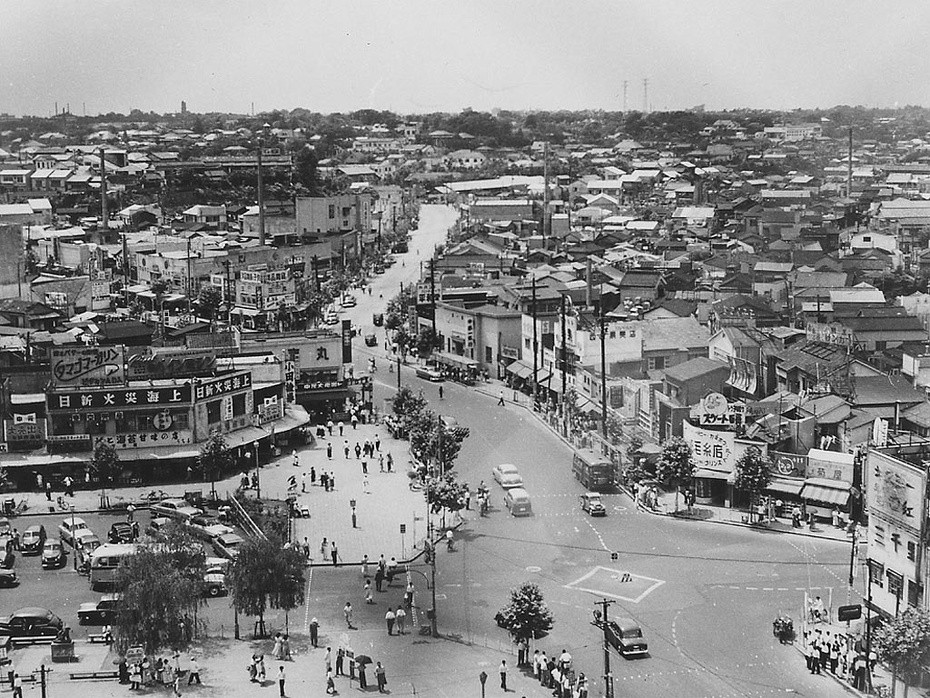 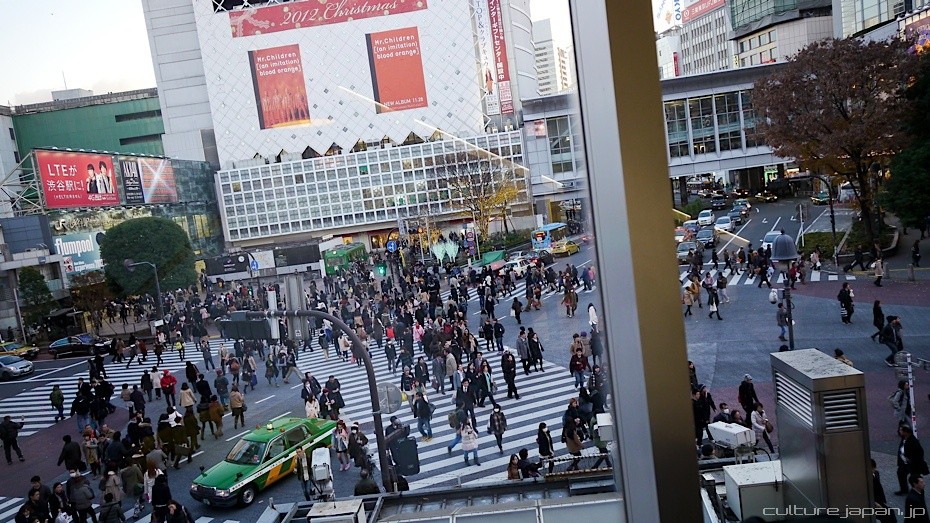 Back to present day - this is the view of the Shibuya Hachiko crossing from Starbucks. 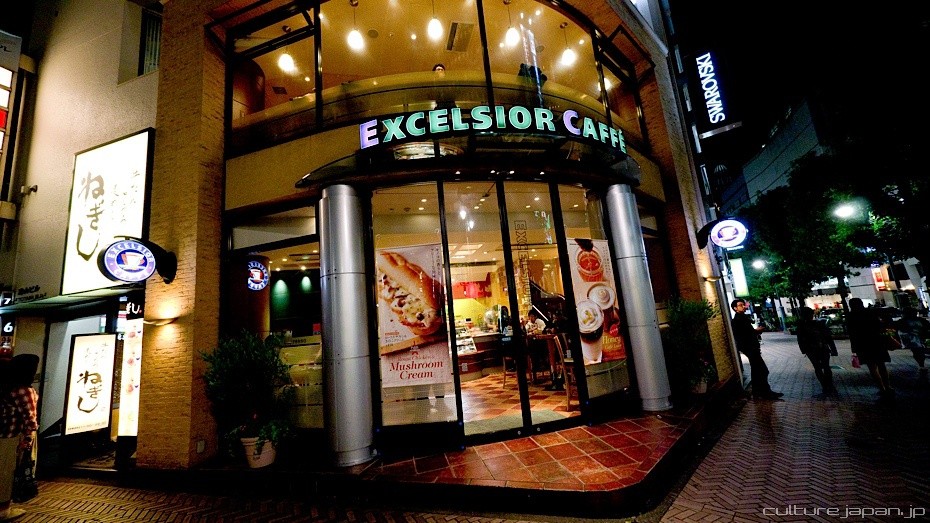 Less than a year after Starbucks entered the Japanese market, Dotour launched a new chain of coffee shops called Excelsior Cafe.
At the time, the font of their shop was all green and looked exactly like Starbucks - and so did their round logo too.
Neededless to say they got sued by Starbucks. 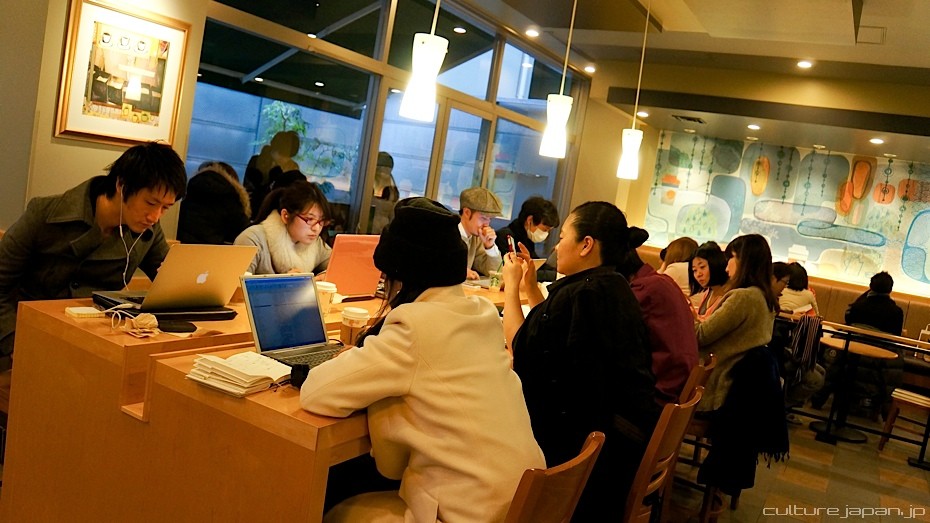 Just like the way the iPhone changed the Smart Phone market in Japan, Starbucks changed the coffee drinking habits of the Japanese who instead of using a coffee shop as a place to do business, they now use it as a place for recreation, relaxation and doing "stuff" on their macs.

And here is the Hitachi version of their Cyclone vacuum cleaner.

I've spoken to many manufacturers in the Japanese industry and they too agree that Japan these days tends to be a follower rather than a leader when it comes to global brands - something that we need to fix. While there are a load of coffee shops in Japan right now which have sprung up to meet the huge demand (Japan is the 3rd largest importer of coffee), I always prefer Starbucks where possible. 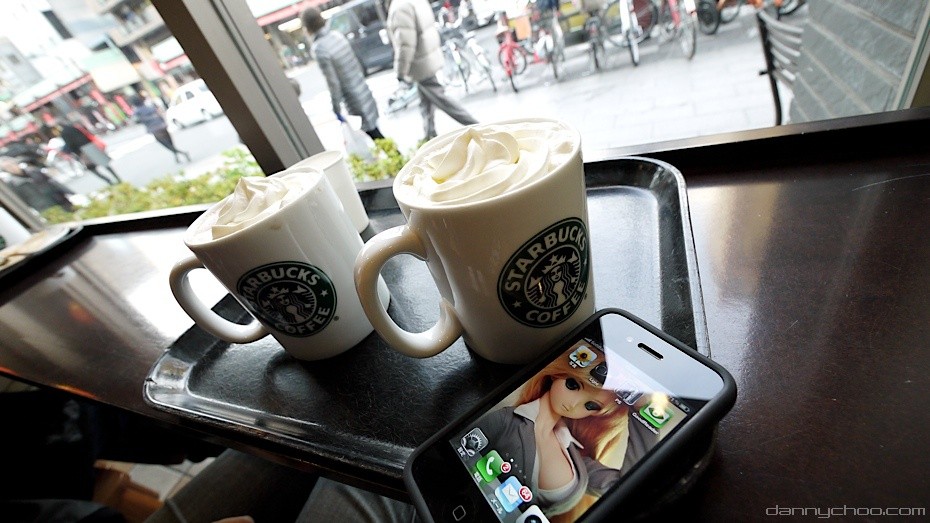 Starbucks with Wifey in Asakusa. 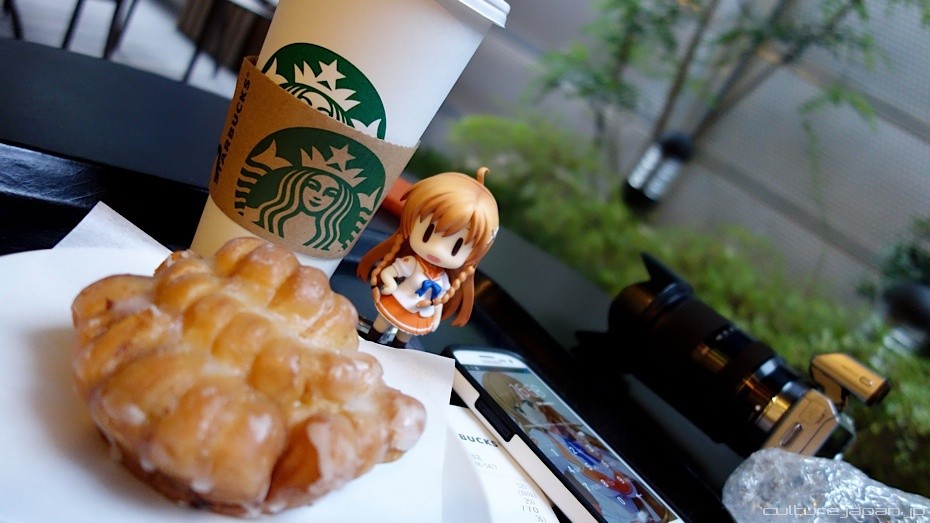 Starbucks with wifey in Harajuku. 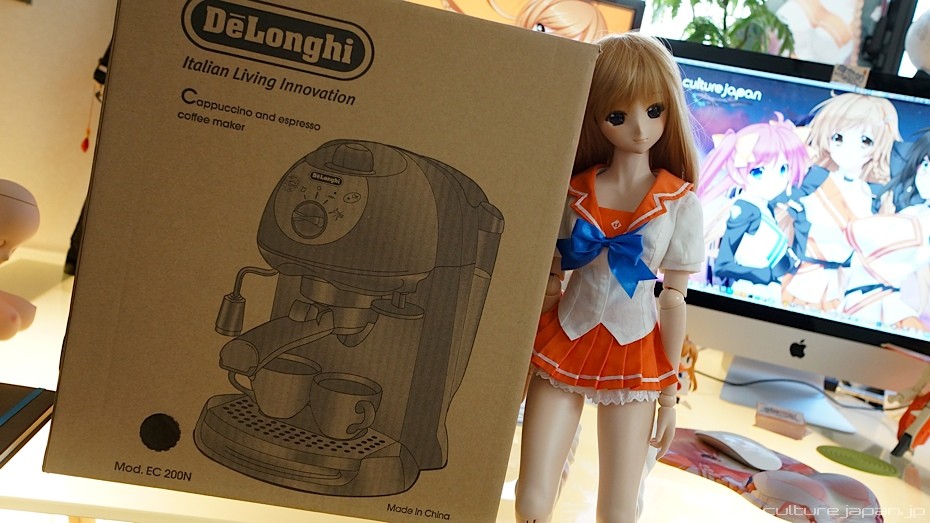 We dont have Starbucks in this neck of the woods - I need to go out to Meguro station or Gotanda. There is Tully's at our station but its not the same ><

Decided to get into coffee making as the instant powder coffee started to taste decidedly weak.
Picked up this DeLonghi EC200N-B from Amazon for 13000 yen so that we can make coffee in the office. Makes great cappuccino but I still want to know how to make coffee that tastes like Starbucks at home >< 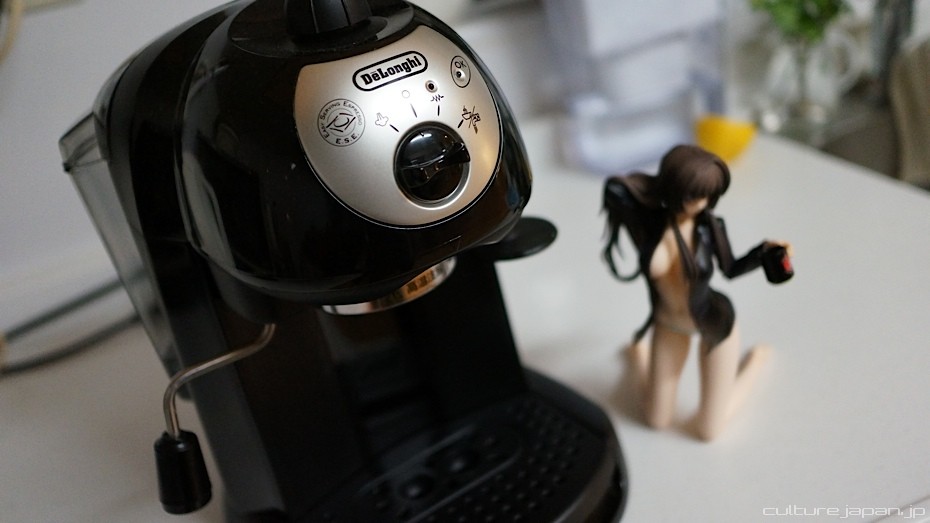 And this is what the actual machine looks like. Apart from making coffee, its got this spout thingy which makes steamed milk too. Very noisy though ^^; 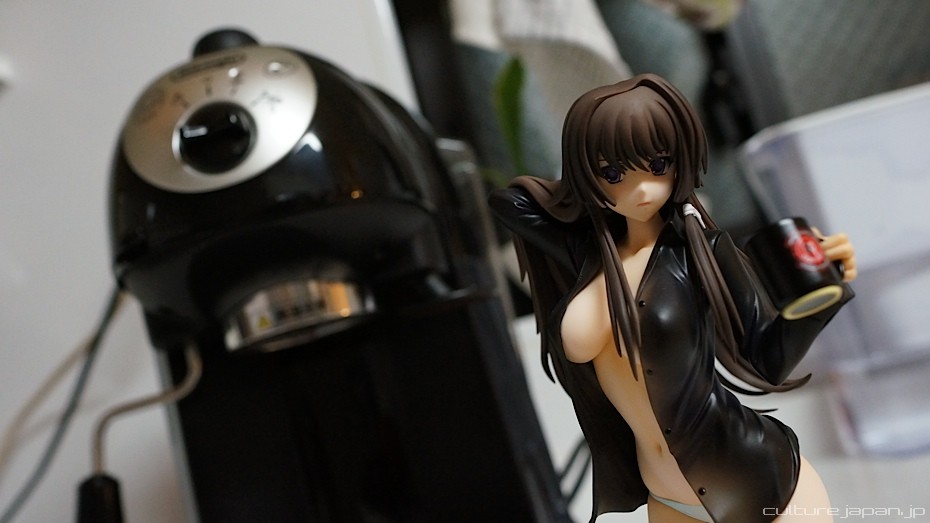 Muv-Luv Yui having a cuppa coffee in the morning. This figure by Skytube - photo review recently posted here. 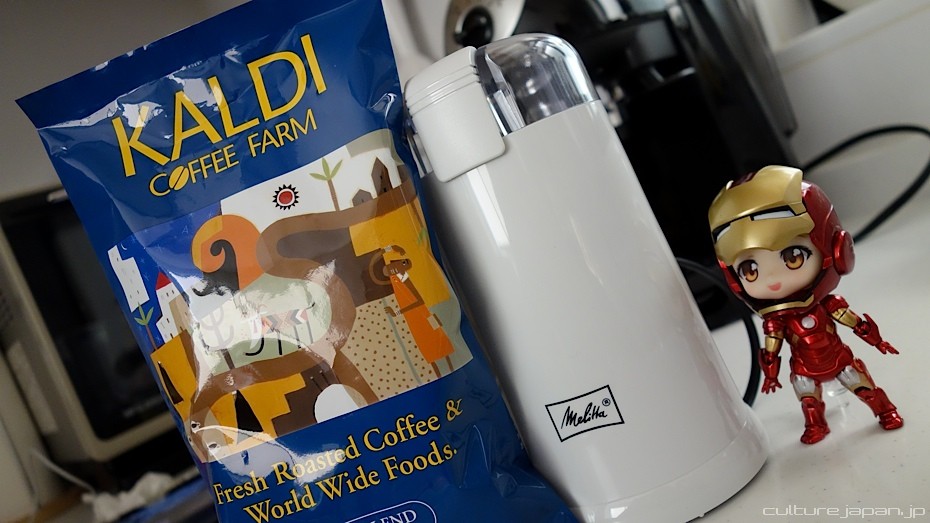 Wanted to grind our own coffee beans too so got this Melitta MJ-516 grinder from Amazon for 2500 yen. 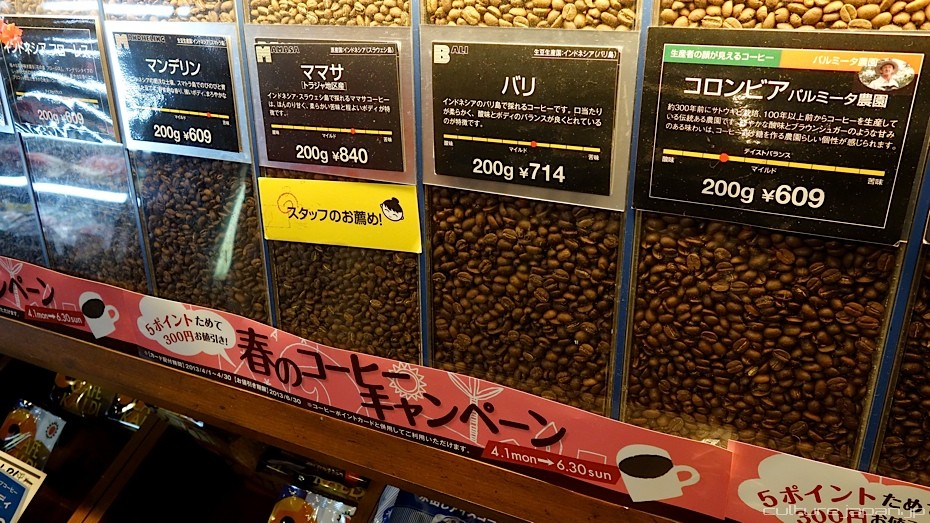 The wife and I are still newbies to the coffee world and have no idea what beans taste good. We usually go to Kaldi and take a recommendation from the staff.
Are you a coffee guru? What type of beans do you recommend? 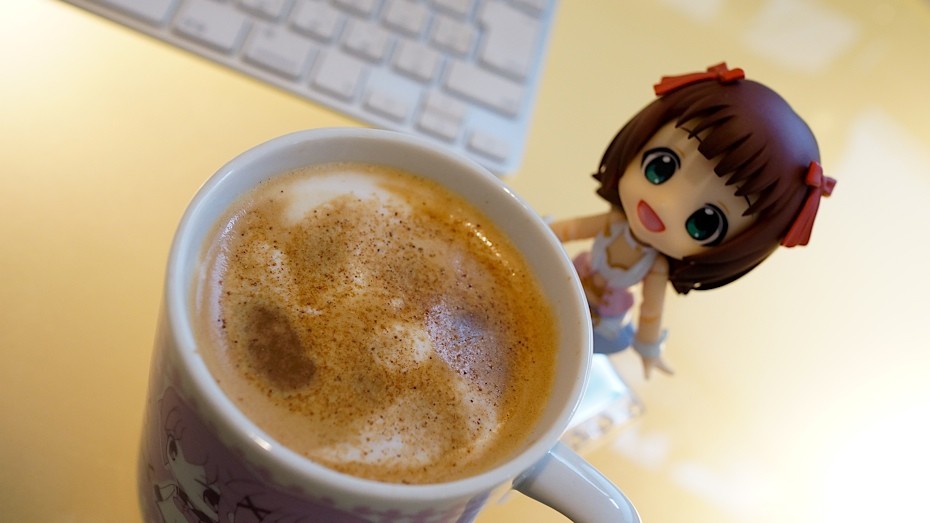 My wife makes a lovely cuppa and this is what it looks like. 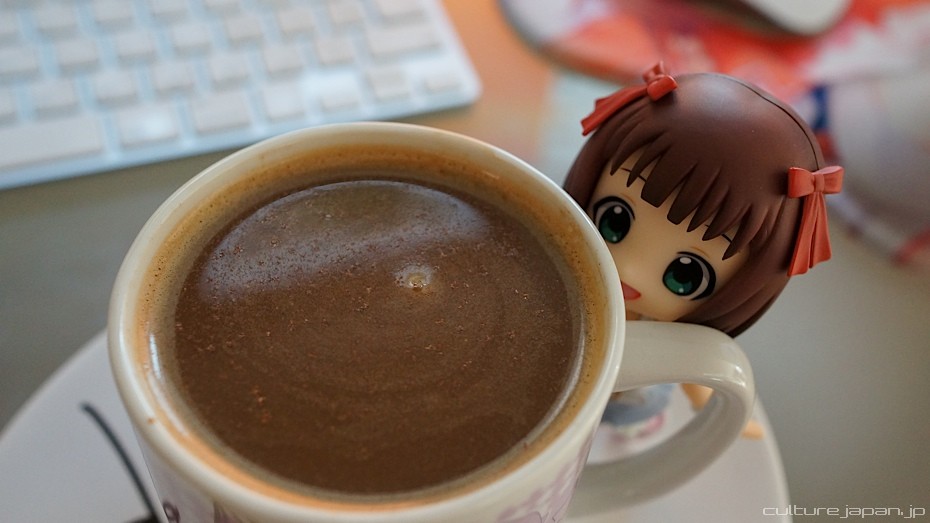 When I make coffee however, it turns out looking like poo >< 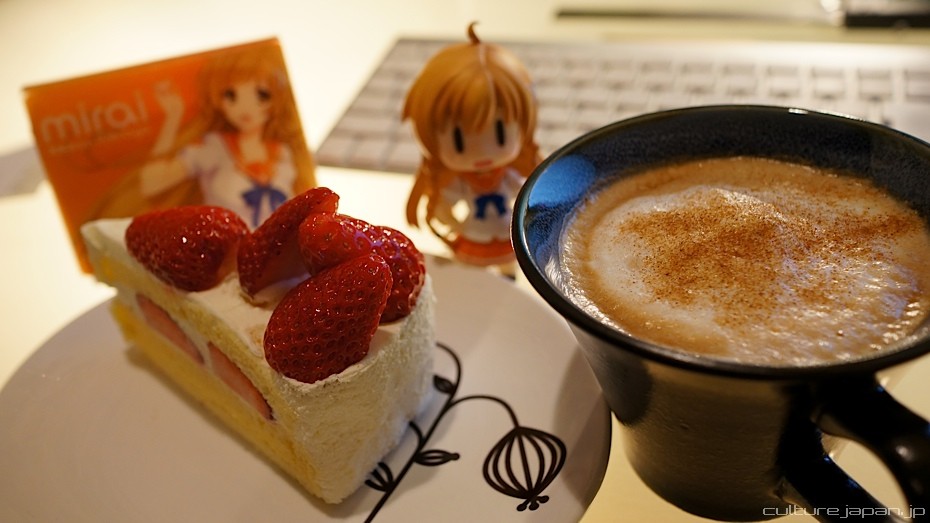 Love having a cuppa coffee with snacks once a day to take a break from being fixated on the computer. 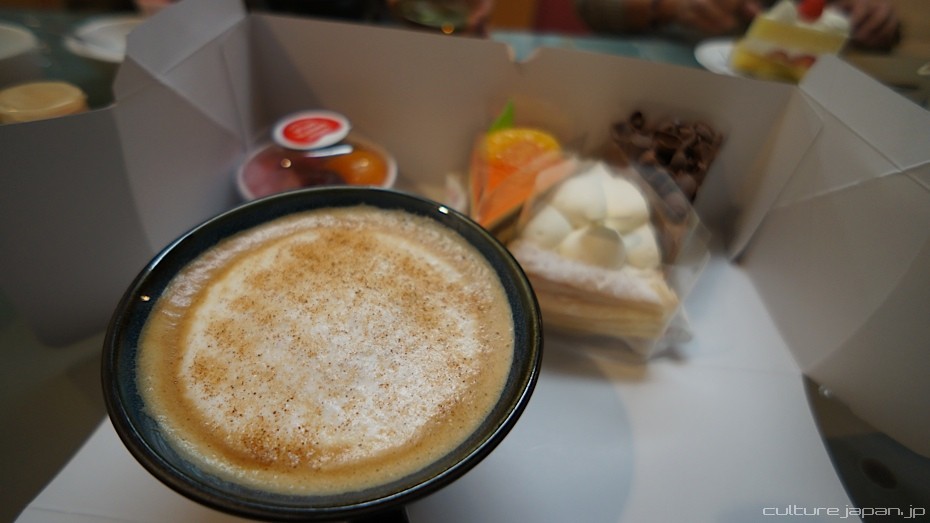 Serving up coffee for our guests. 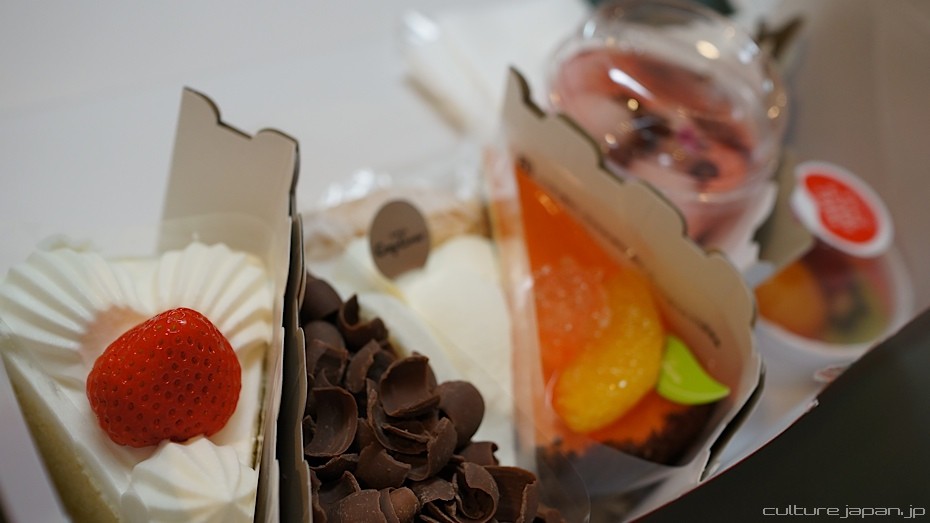 And these are the type of sweets that we have - not every day though ^^; 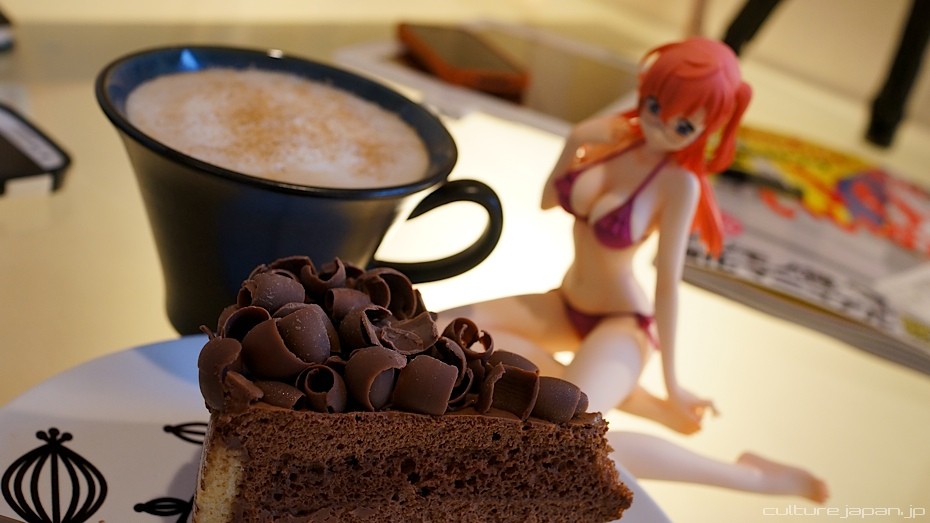 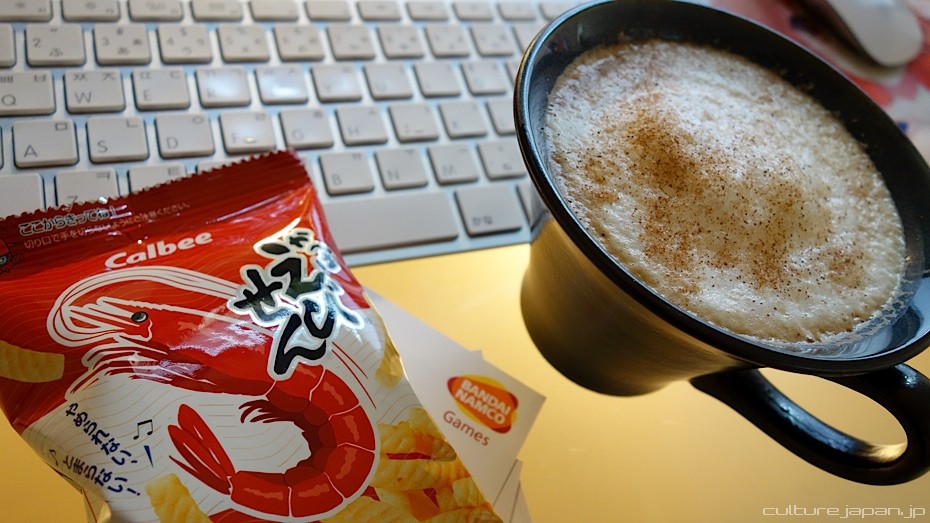 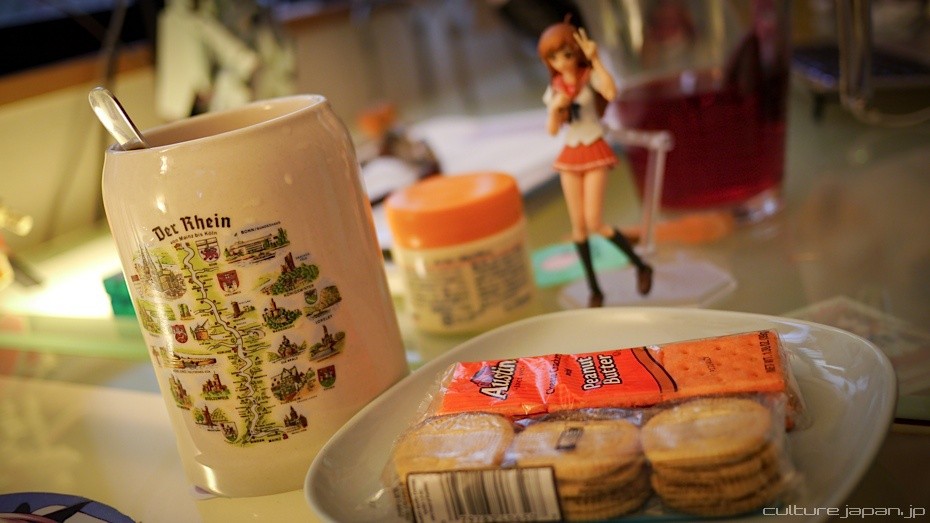 I do still love my cuppa tea though - was brought up drinking tea back in the UK. 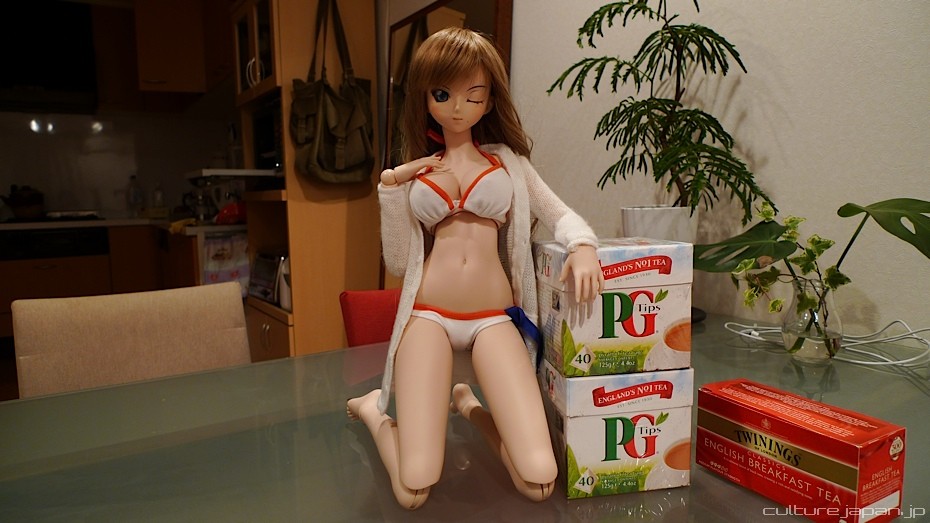 And this is the brand of tea that I usually go for - PG Tips. They used to sell it in Japan in some stores but cant find it anymore so need to fill up stock when I'm overseas.