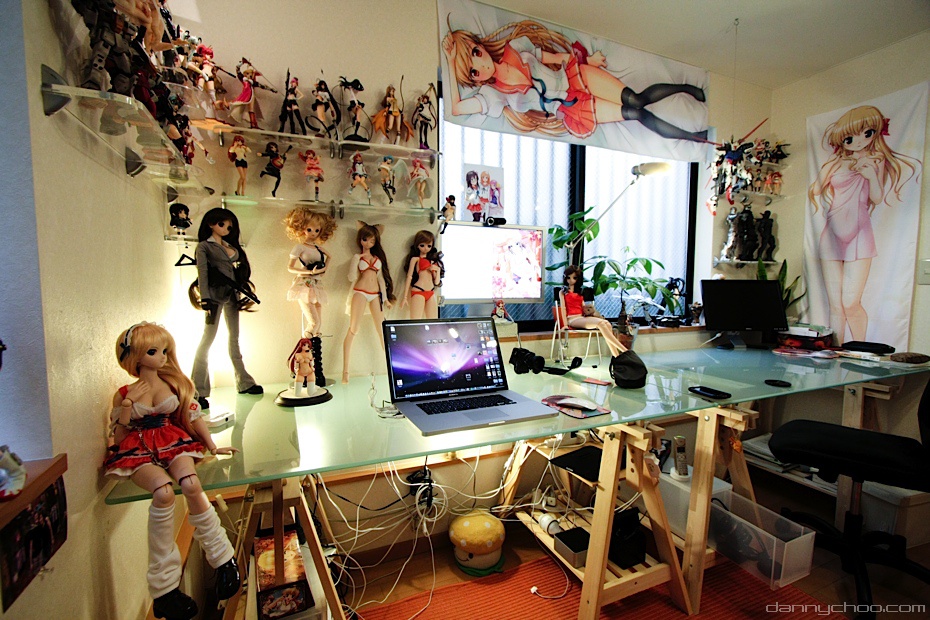 This series was supposed to be updated more than every few months ^^;
Since we last spoke, there has been so many changes that its hard to believe that its just been over 2 months.
A few notable things that have happened over the last few months would be:-

Started to write for ASCII and have just submitted my article to be published at the end of June. 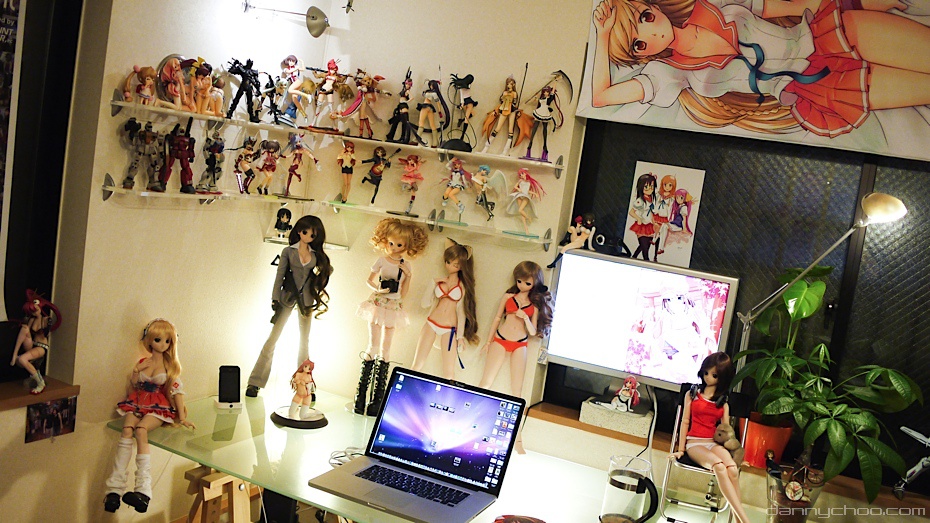 The biggest change however is the direction that my company may be taking. Due to the various conversations with folks that I've met over the past few months, I decided very recently to explore possibilities of Mirai Inc manufacturing our own products. Currently doing a ton of research and speaking to a load of manufacturers for advice. Also speaking to factories in China regarding production process, plastics and wot not.

While I'm familiar with the market, the production process is all new to me. Its certainly a huge new challenge but that's what life is about and I need more challenges to help me grow. My first destination in life was to get to Japan, the second was to start my own company and my next destination is to learn how to mass produce products - starting with a shoestring budget!
Each new challenge comes with a load of obstacles to overcome and one of the important things in life is to seek such obstacles which will help you overcome even bigger obstacles in the future.
I may as well be dead if I chose a life of plain sailing. No obstacle no life.

The research time needed for this new challenge means that I've also decided for the time being not to accept any new orders of Mirai Gaia. We will however still be maintaining and beefing up our current Mirai Gaia sites which include figure.fm, tsubuyaku.fm, goodsmile.info, cospasea.com, tokyo.japantimes.co.jp, Kotobukiya Otacool related sites and dannychoo.com.

Have been building websites for over 10 years now and the next challenge is to reach out to more people around the world through anime production and product manufacturing. I'll have more updates over the next few weeks and aim to start getting stuff out by the end of this year. 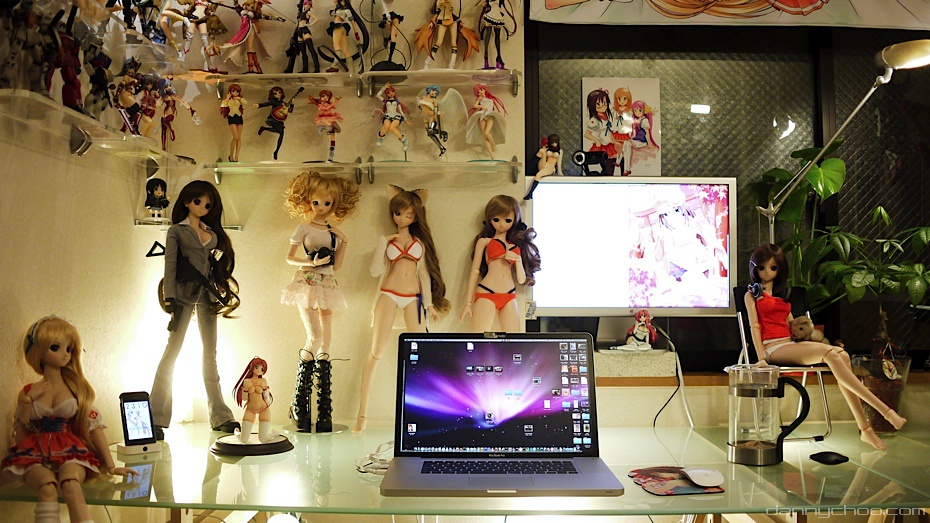 Most of my time of late has been devoted to the production and planning of Culture:Japan - everything from presenting, gathering sponsors, scripting and wot not. It will be on air June 12th on Tokyo MX TV from 21:00 - 21:30. It will then air on Animax Asia from July.

Other updates include being invited to speak at Anime Expo which takes place in LA between the 1 - 4 July 2010.
I'm trying to get you exclusive footage of Black Rock Shooter just for AX but need to wait until next Monday to confirm that the production team can deliver. Will update you next week on this.

University of London have released an interview with me as a podcast that you may want to listen to while having a poo or something.

After getting back from LA, I'm being casted as a presenter for another TV show - filming in mid July I think. After that its another trip back to Malaysia to visit some factories. Hope to spend more time with you out there.

I think there is more to update you on but cant remember what they are ^^;
Will try to get to the next A Week in Tokyo this weekend before I leave a big blank in my life ^^; 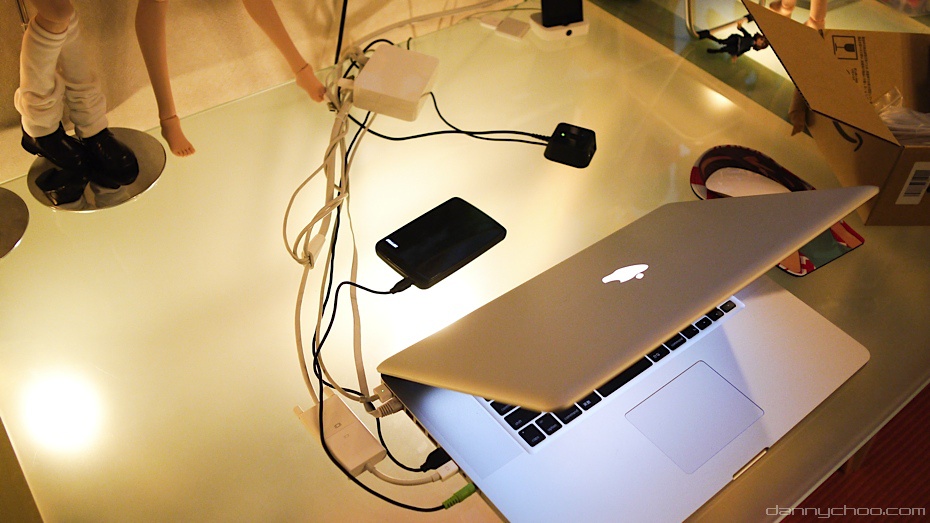 Anyway, gave my work area a big overhaul when I got back from Malaysia. Want to improve my workflow by removing distractions without compromising the amount of lovely ladies around the desk.

First up was to have the MacBook Pro in front of me. This gets rid of the extra keyboard and because its not mounted on the stand in the corner anymore, it makes it quicker to remove the MBP so that I can work in other areas of the house.
The 17" MBP is the same resolution (1920 x 1200) as the Cinema Display so I still get the same amount of area to play with.
I cant touch type so the distance between the keyboard and screen makes it easier for me to write posts too.

One of the reasons why I didn't come up with this layout sooner was because of the short Mini DisplayPort cable that left the ugly cable/adapter/usb cables all over the gaff - horrid!
Then discovered that they do Mini DisplayPort extension cables and nabbed one from Amazon for 3650 yen. 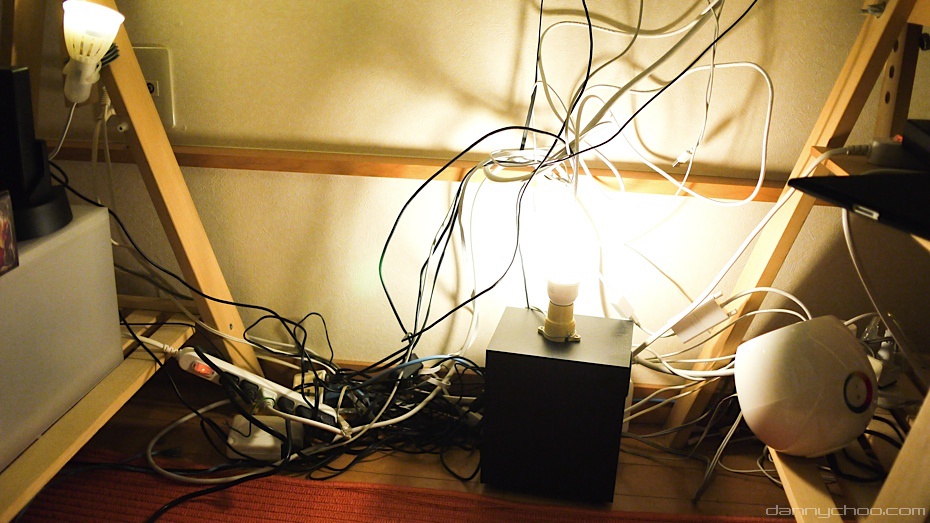 Beneath desk was a mess mainly because of the Logicool speakers that I had - nice sound but more horrible cabling layout. 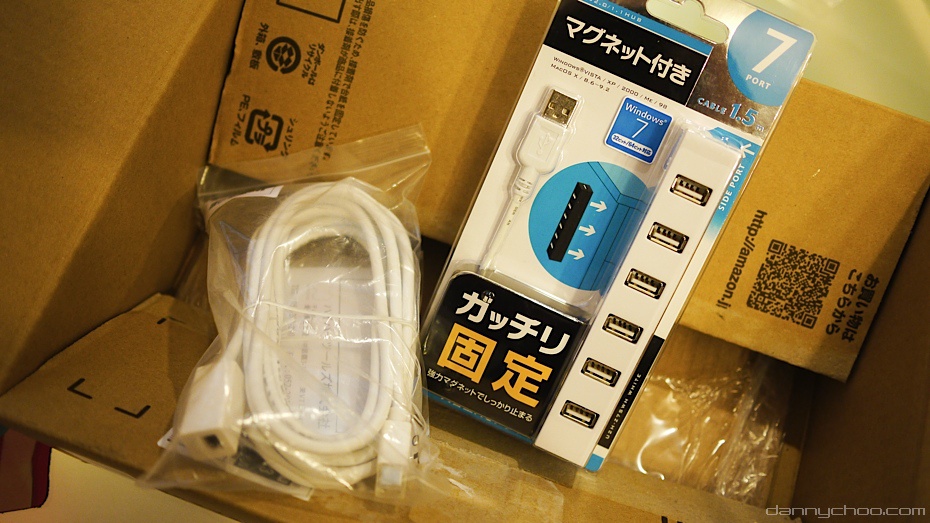 Got a few things to help me with the mess - the mini port extension and a 7 port USB hub which I can keep under the desk. Comes with a magnet inside so you can conveniently attach it to your dolphin.
Having the hub beneath the table not only means a clear desk space but it also forces me to crouch down to plug n pull stuff - means that I have an excuse to do stretches to get under the table ^^; 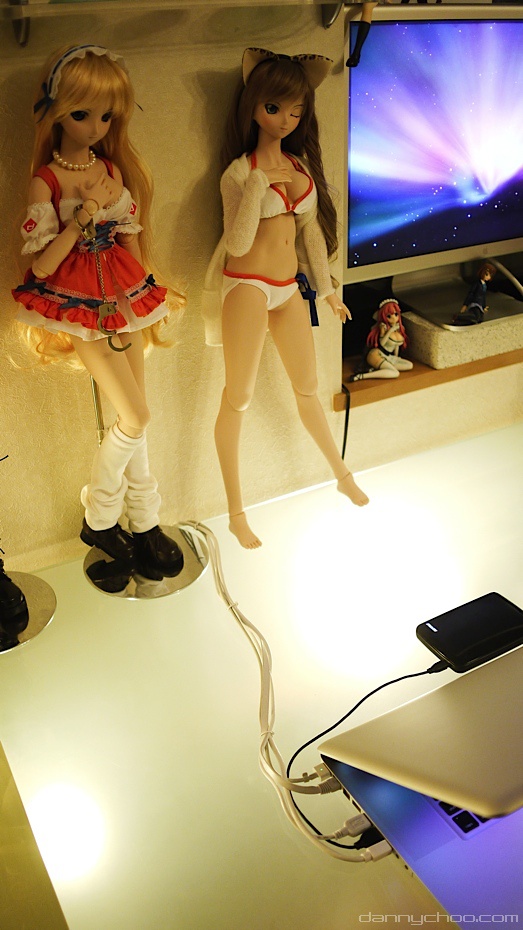 Sukkiri! "Sukkiri" is the word to describe when something is clean/tidy/fresh/not cluttered. You can even use the term "sukkiri" after you have gone for a pee because it leaves you free from the tension of holding the water in. ^^; 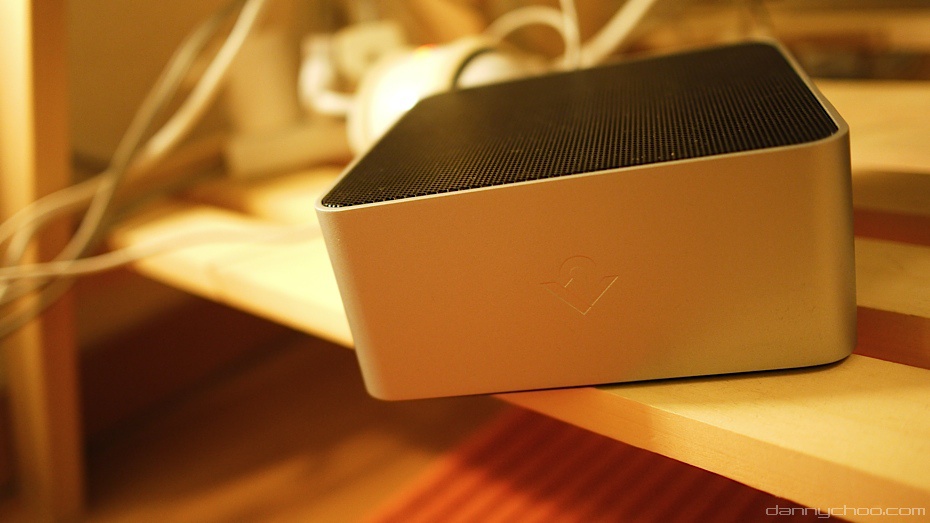 Got rid of the previous speaker set and replaced it with the USB BassJump subwoofer for the Mac - got it from Focal. Retail price is 8980 yen.
The video below should give you some idea of the sound with BassJump turned on and off.

And the unboxing below if you want a closer look.

The subwoofer makes a world of difference but the sound does go a bit funky from time to time could be because I've still got a funky installation of Leopard though.
What speaker setup do you use and recommend? 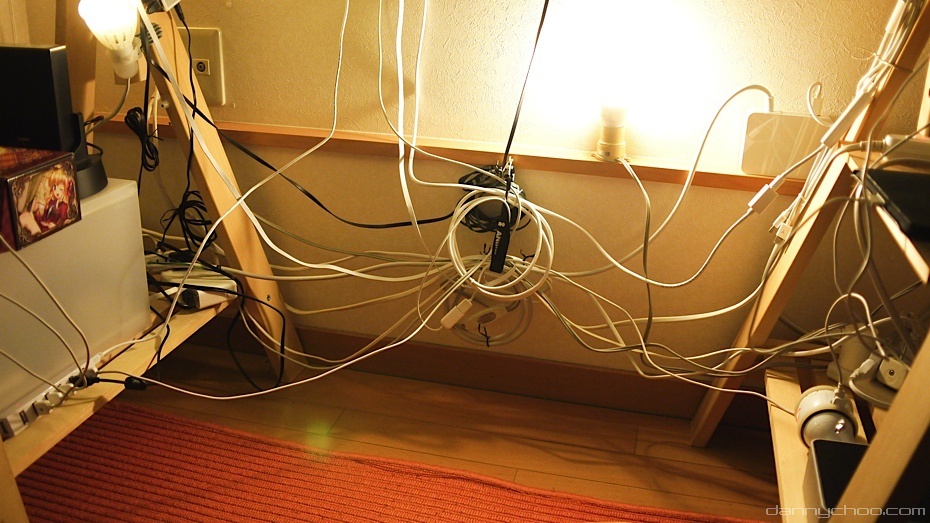 Beneath the desk - still messy but not as bad as before. At least I can hoover without the wires getting in the way. 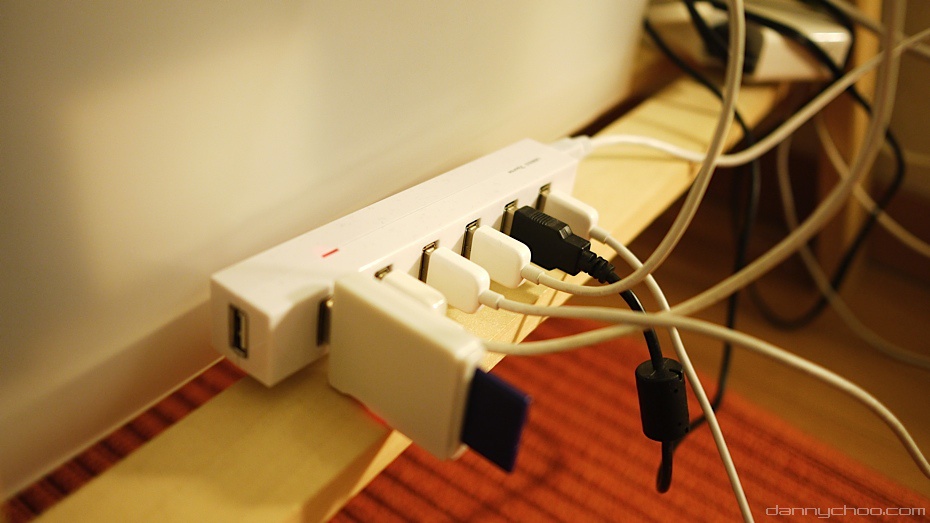 External power supply for the USB hub is needed depending on the power consumption of the USB devices. 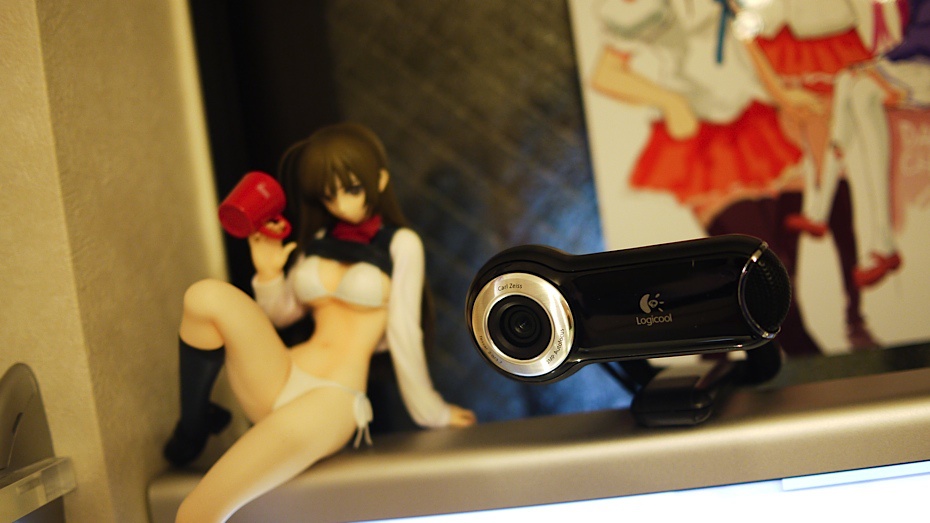 Didn't need the external power supply for the USB hub until I plugged in this Logicool Webcam Pro 9000 QCAM-200SX. Not officially supported for Macs but just plugs and plays. None of the advertised features work such as autofocus but me not bothered. I can use quick time to record videos at 640 wide but for some reason not at the native 720p that the webcam provides. 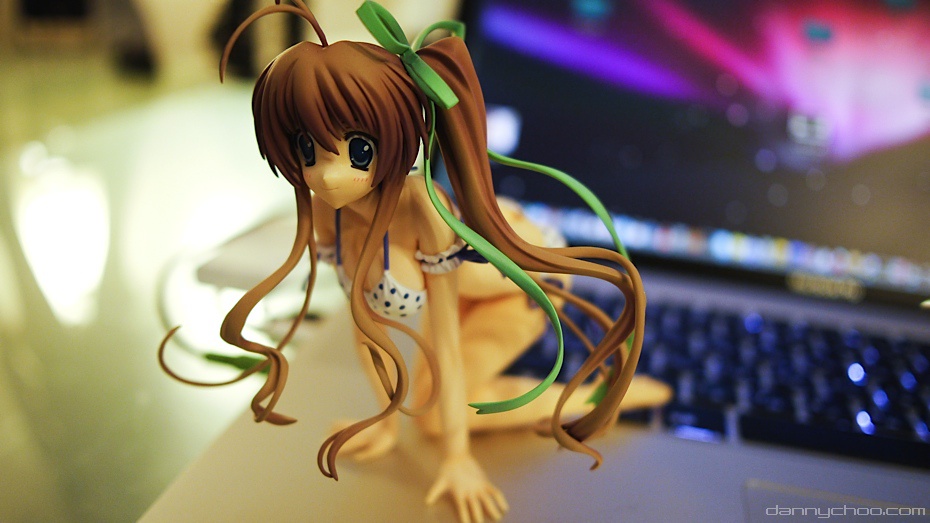 Will leave you to poke about the rest of the room while I get back to working on the show - a ton of stuff left to do before Satomi Sato is in the studio next week! 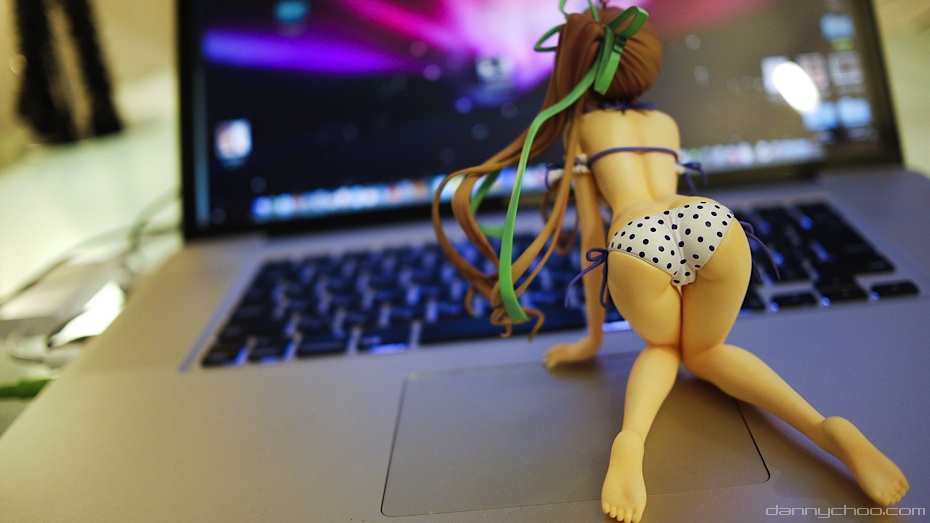 Ah nearly forgot - am on NHK World today on a program called A is Asia. 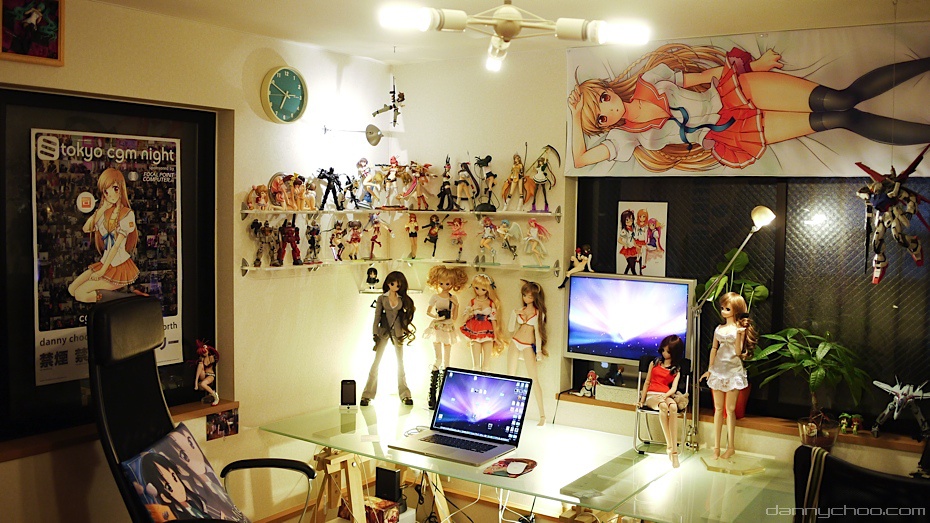 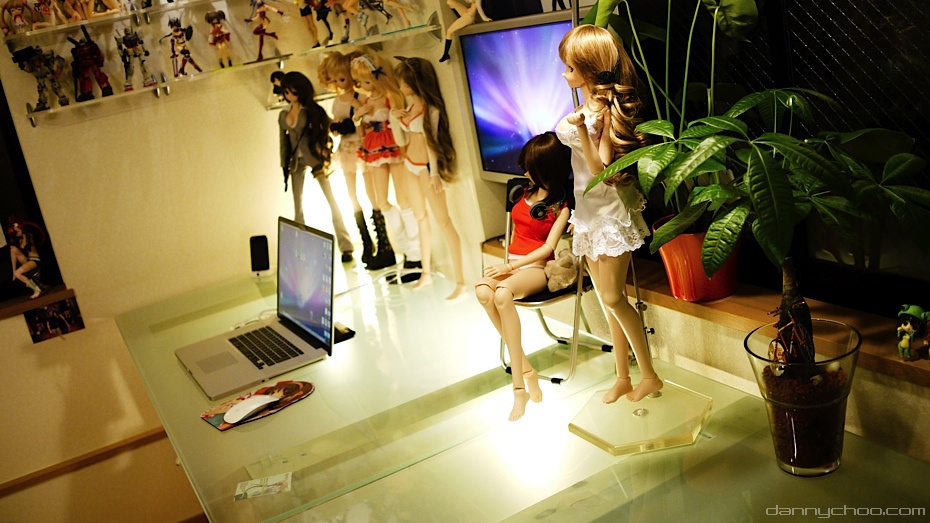 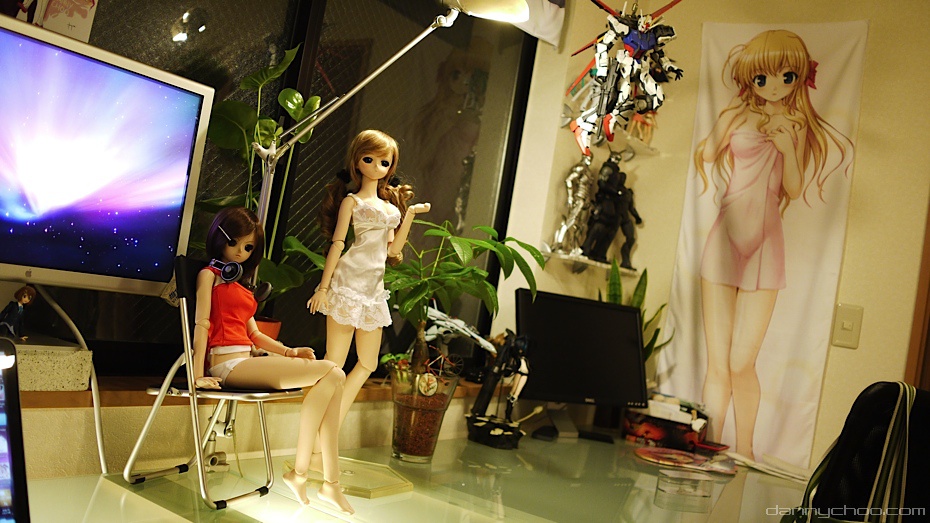 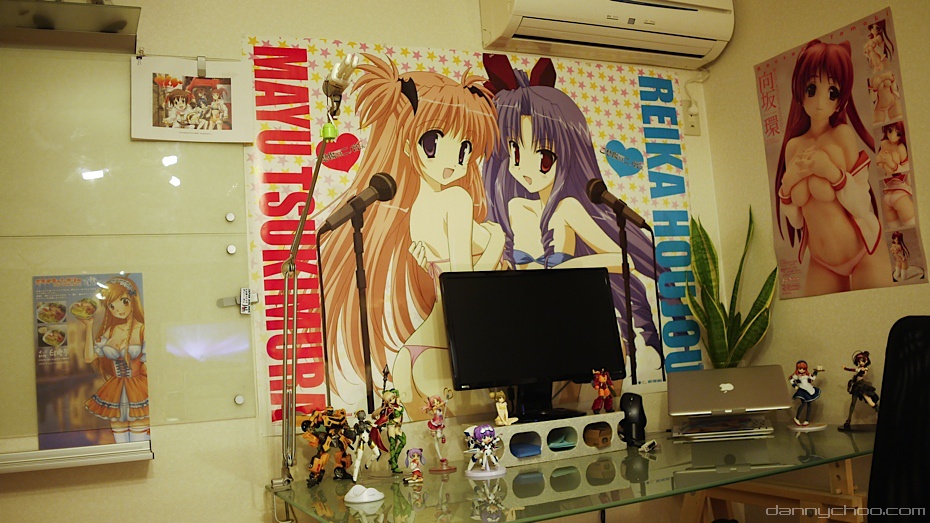 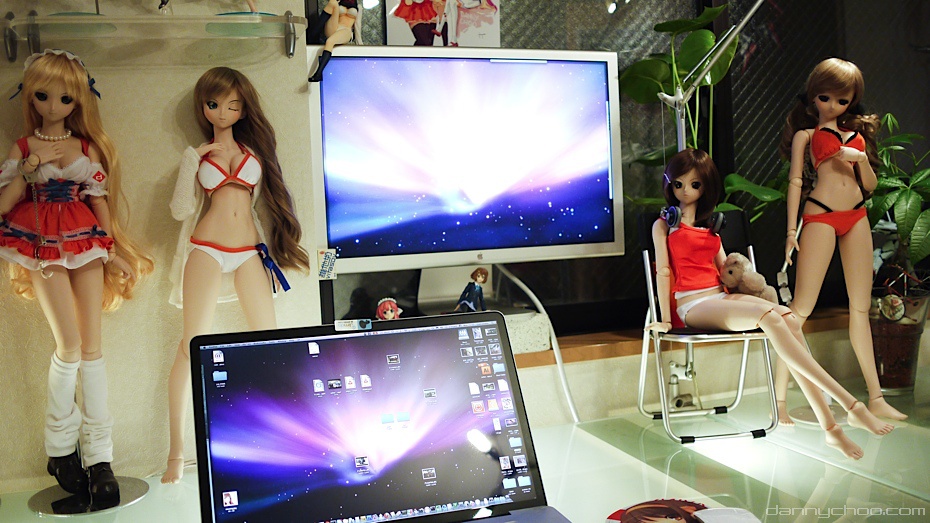 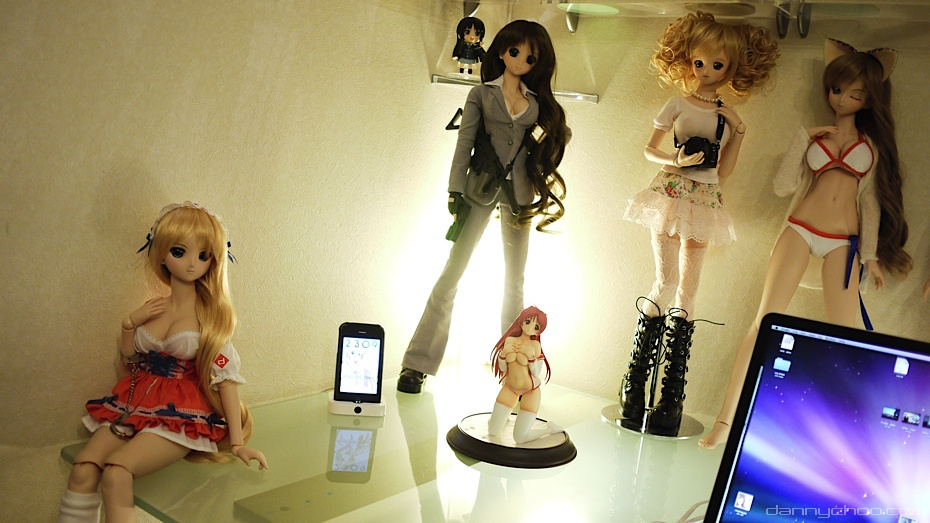 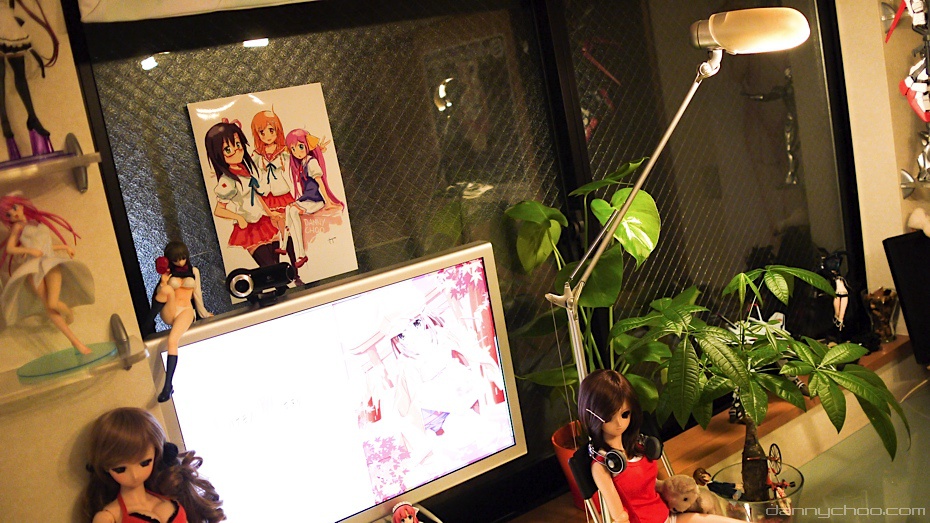 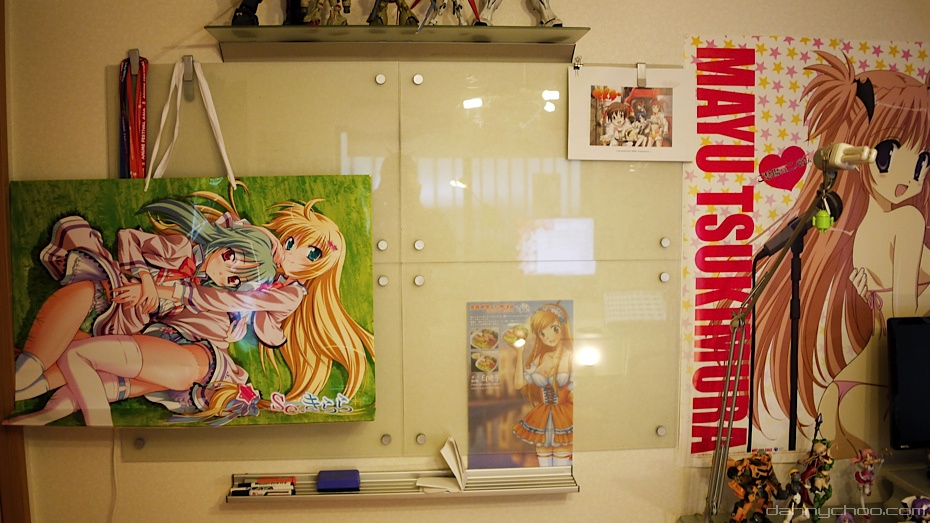