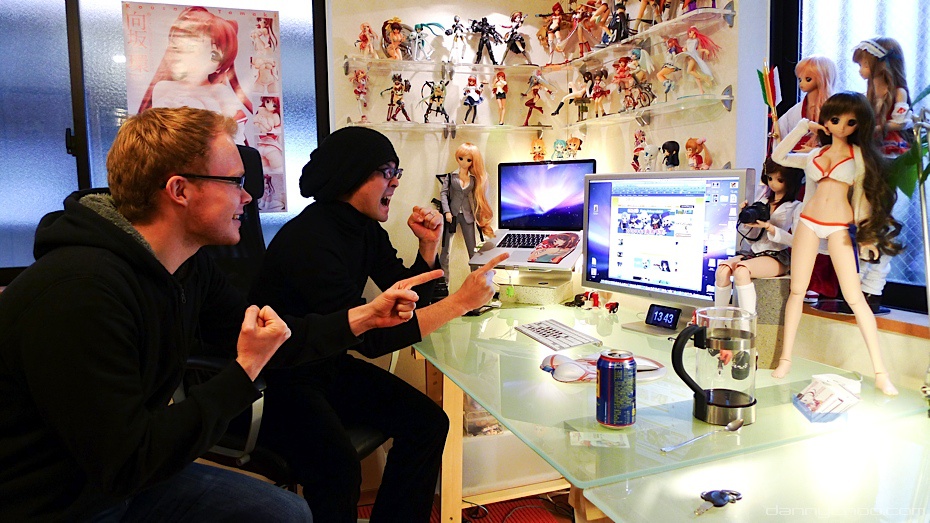 The second installment of Desk Diary where I go over whats on my mind and what I'm up to while taking a look at whats going on in and around the desk.

January 2010 has been one of the most incredible months ever. When thinking about all thats been happening in these few weeks into the year, I account everything to what I always preach:-
Identify and live your passion and the rest will just follow - it always does
In January alone, we've had so many requests from companies to use Mirai Gaia that we are booked for the next few months - and all requests from brand names that most of you are familiar with.

This month I managed to find a superstar developer who is also well versed in social media. He is due to start mid next month. Thinking about what Chris and I have been able to achieve alone with our remote developers, the addition of another local member to the team excites me at the prospect of being able to produce nearly double our current output! This battle station is indeed fully operational.

Last week, I've also been contacted by a few manufacturers (*looks up at Strike Gundam hanging from the ceiling*), book publishers, local TV stations and the government who are also interested in working with us @.@

Was also just recently invited to France where I will be involved in a most most exciting global project. I think I'm flying off to France this March or April. Will probably spend a week there.

Here is Chris and I doing an impression of the 4 Koma Gaijin - have you heard of this Japanese Internet Meme? 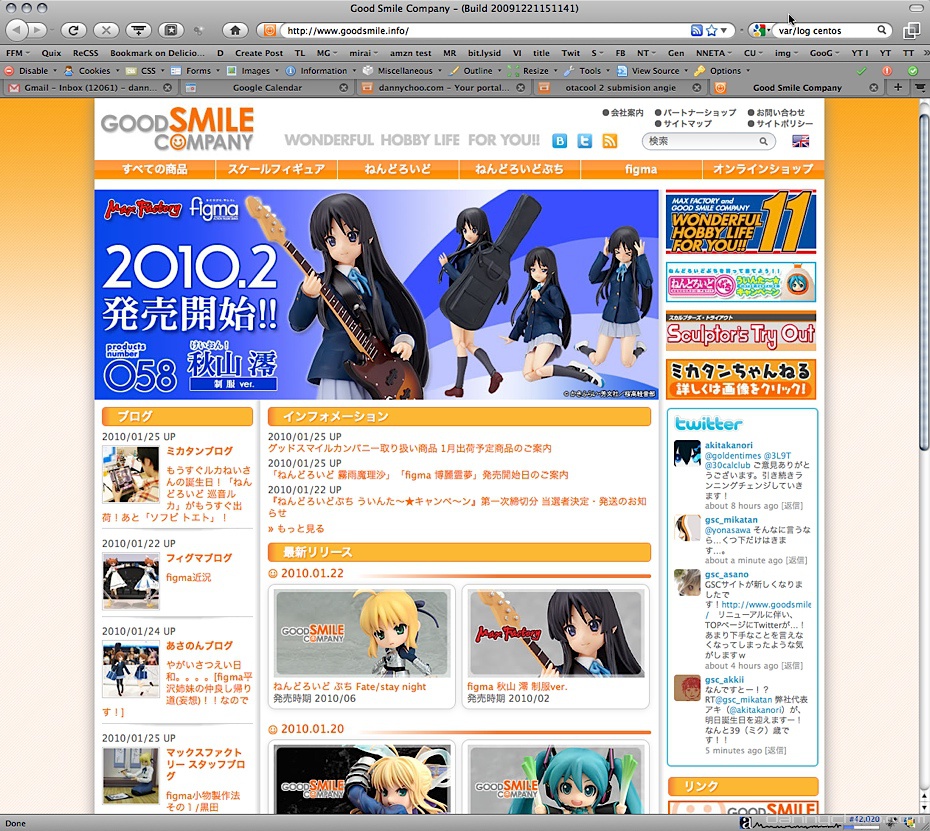 And this is what Chris and I are getting all excited about in the 4 Koma Gaijin pose - relaunch of the Good Smile Company site on the latest version of Mirai Gaia - went live today at 12 noon. 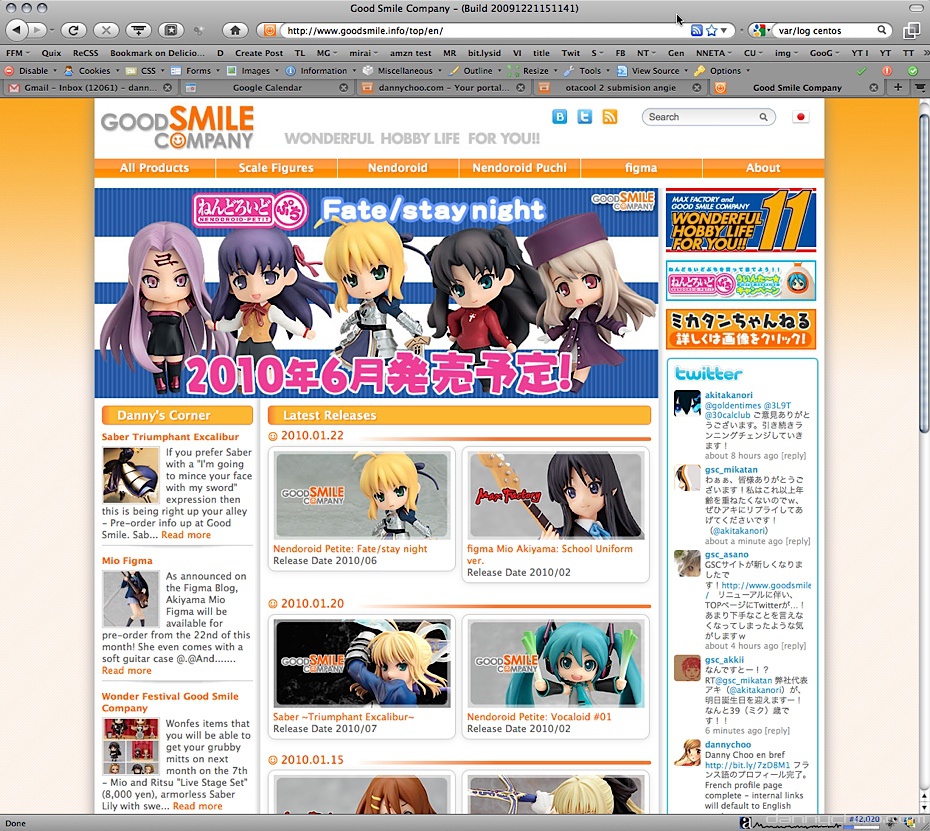 English version available at http://www.goodsmile.info/en/
Folks who been using figure.fm and Cospa will know that Mirai Gaia is a platform that publishes, enables our clients to easily manage, showcase and sell their products and also run CGM (Consumer Generated Media) communities. "Sell products."
Hmmmm. 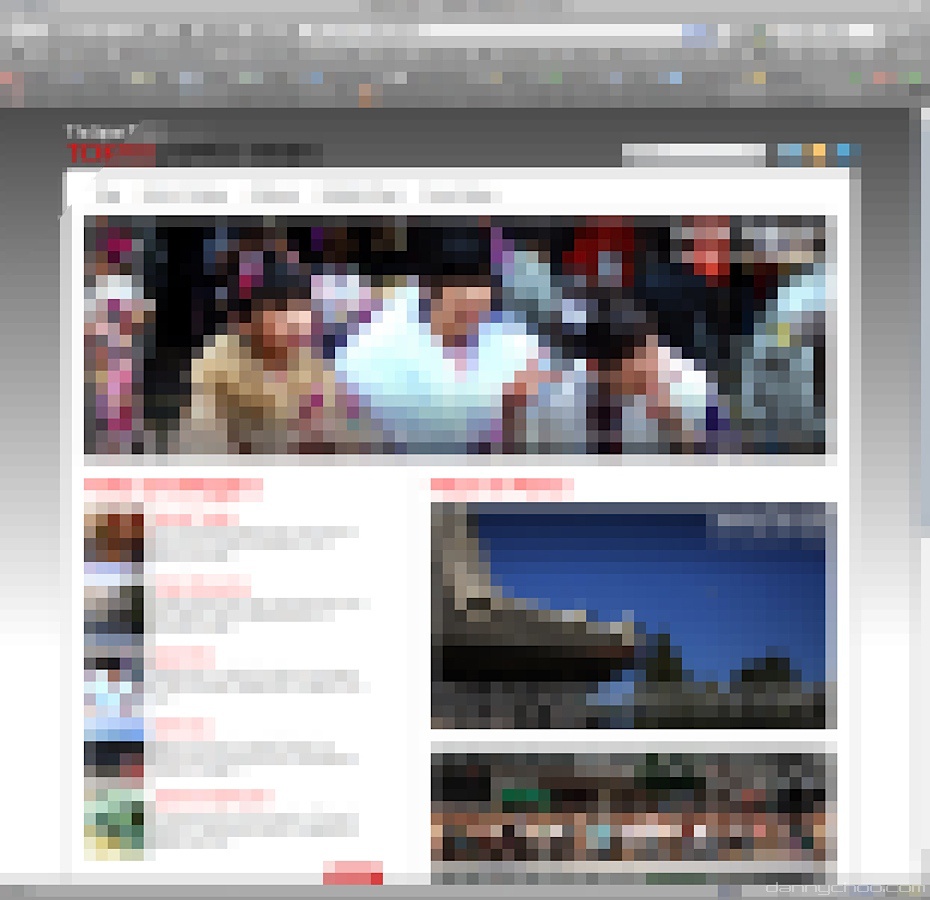 And another reason why Chris and I are all excited in the 4 Koma Gaijin pose - we've been also working on another site to be launched next month. Tis another *huge* brand name who have been around since 1890's! 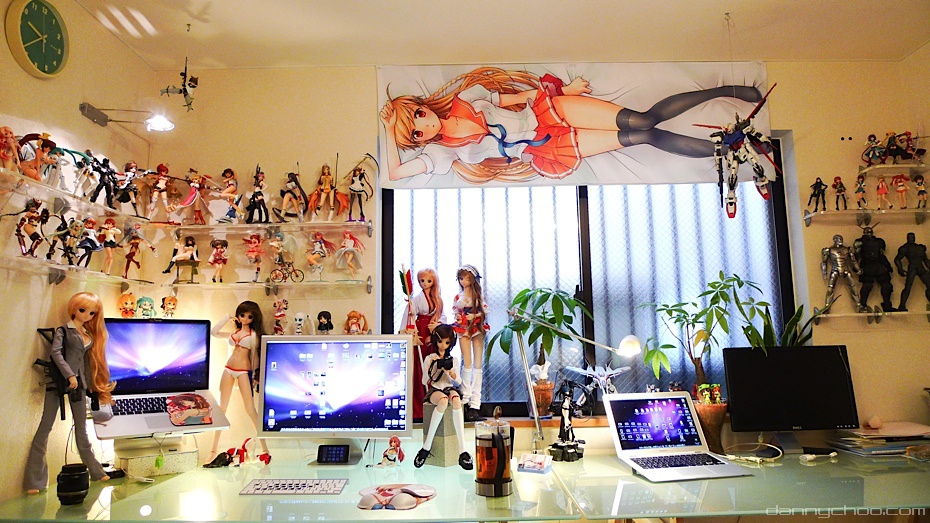 A few changes around the desk since last time. Miyafuji is now hanging from the ceiling and spins round when the air conditioning is on. Moved the Mirai dakimakura cover to the edge of the ceiling - didn't like the gap that was there before.

Nanoha now stands between the MBP and display - she stares at me all the time and looks very cute.

Karin and Ryomo switched places because I'd rather look at Ryomo's legs than the bottom of Karin's Miko outfit.

Also a few new figures here and there - can you see what they are? 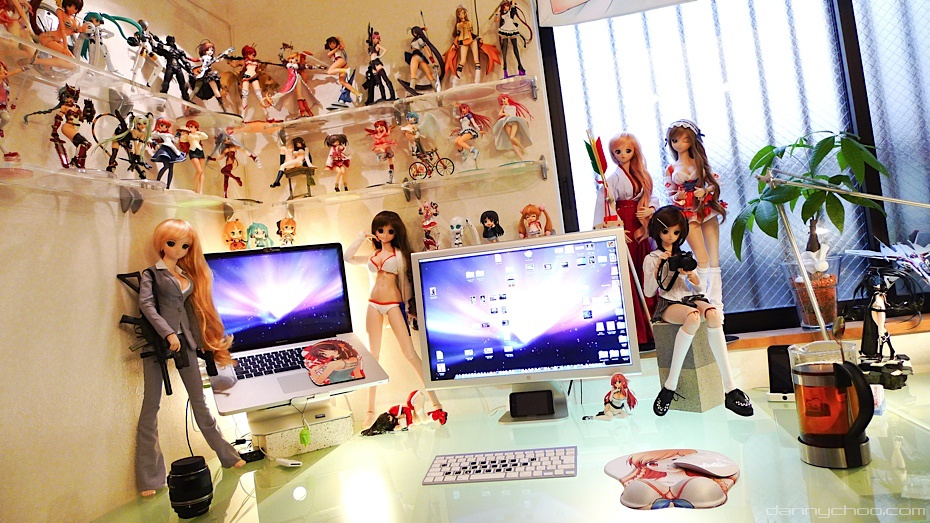 Been also spending time revisiting my current workflows - searching for better tools to enable me to do work in a more efficient manner.
Folks who follow my Twitter will discover a few tools that I've shared like a bookmarklet that enables you to reload just the CSS stylesheet - great for development which means that you can see changes on dynamic sites without waiting for a refresh after clearing database cache.

Also been looking at streamlining my browser and mac environment - but am eager to see what announcement Apple is going to make this week about that Apple Tablet thing! Will probably play a part in automating my work flow too.

Taking time out to look at your current work flows is important - getting into the "it works so leave it/don't change it" mentality is dangerous as there is always a better and more efficient way to do something. Our lives are filled with small things that we need to do but if we spend all our time doing them, we wouldn't get the big things done.
Once you've established a more efficient way to do something, you will have more time to focus and achieve those big things.

Its also important to eliminate as much of the small things that don't really add value to your life. The more small things you are doing - the more distractions you will have. 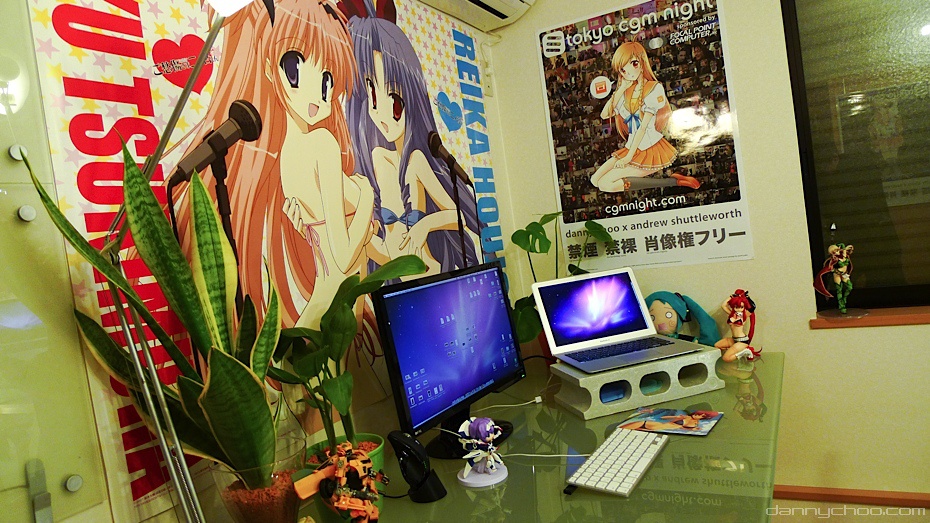 This is Chris's control station. He gets to look up at big eyes and tsuru pettan while thinking. 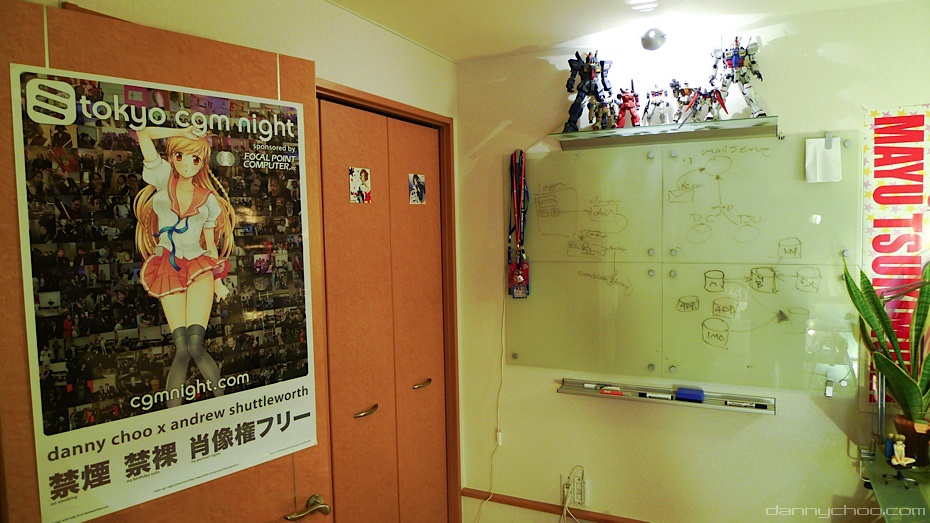 Stuck up another Tokyo CGM Night poster - something for folks to look at on the other end of Skype. 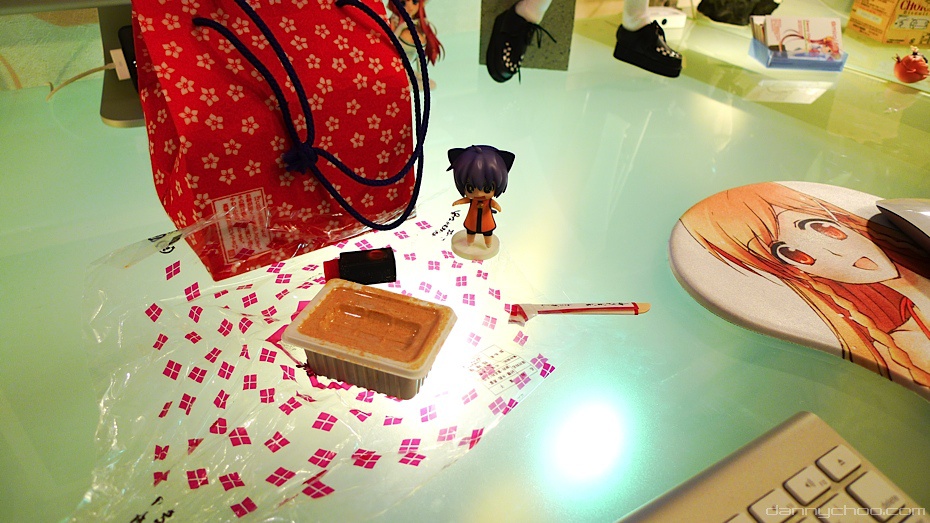 Some after dindins Japanese traditional sweets.