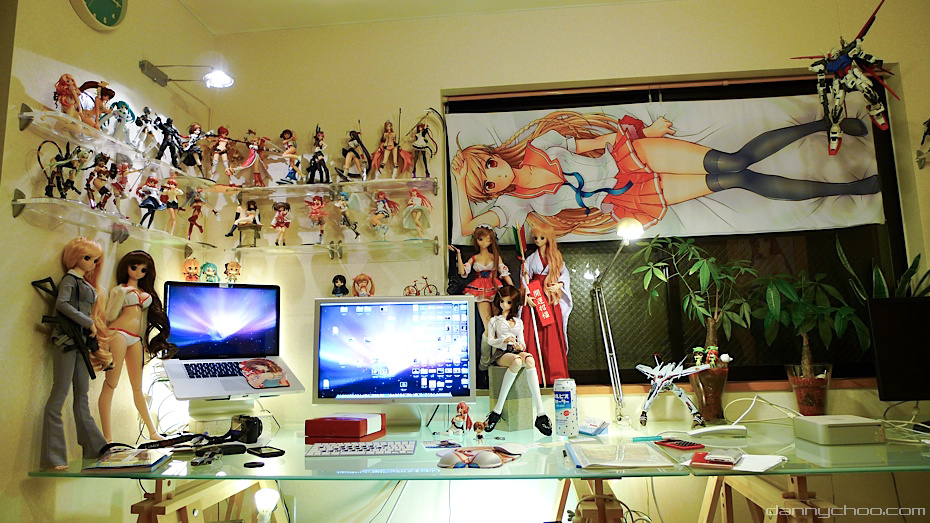 The A Week in Tokyo series has been a great for me to personally look back at my life to see what was going on. If I didn't document what I did over the years I'm sure I would forget a lot of what went on ^^;
What I don't have at the moment is a diary of what's happening to me right now, what's going through my mind and what leanings I've made of late.
Thus I've decided to start a new series of Desk Diary which I can look back at to reflect on my life journey as I discover and piece together new jigsaw pieces.
Will also use this series to keep a log of how my desk environment changes through time too.

Its just a week into 2010 but so much as already happened. Was on Tokyo MX TV last Saturday, redone the site design for one of our clients, had meeting with a French show Canal Plus and met up with NHK today for more broadcasting shenanigans in Feb. Japan Times also came round yesterday for an Interview.
Another huge figure/game manufacturer contacted me this week who is interested in working with us on a new project.

Many folks ask me how I manage my time - the answer is "with great difficulty." There is so much that I want to do but just not possible without growing another pair of arms and legs (but not another dolphin).
I need to make sacrifices so that I can accomplish the things that make a big difference rather than doing the small things that make small differences.

I learned this well when I was Site Manager at Amazon. My clients were called Business Owners - folks in marketing, supply chain, entertainment, customer support and so on. All of them would always have small requests for my team - most of the requests were important but only made small differences.

If I asked my team to do all those small requests, we would have never got round to doing the stuff that made big differences - the big projects that has grown Amazon to being the biggest e-commerce site in Japan.
For example Cash On Delivery (COD) was a huge project that required all the resources of my team. We would not have been able to compete with other online retailers without allowing customers to pay COD. Doing all the small stuff would have meant that it would have taken longer to get COD out the door and by that time it could have been too late. 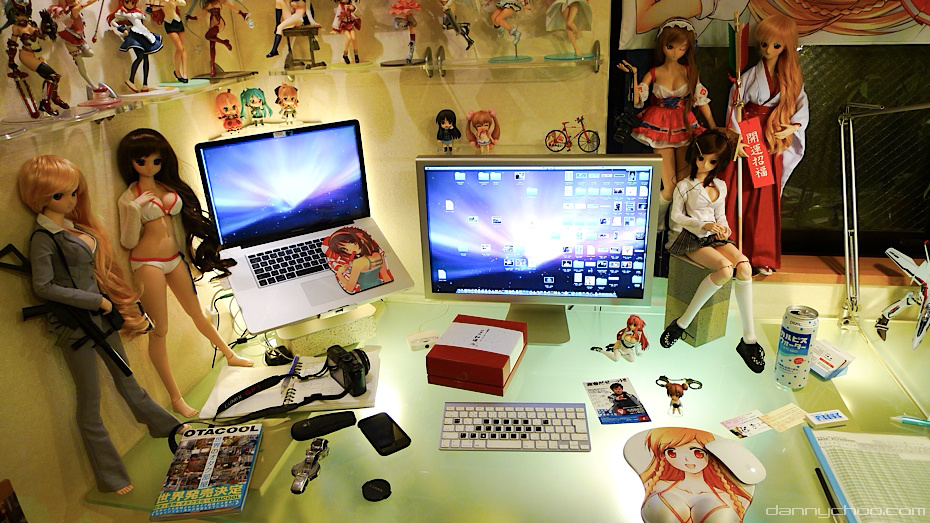 I love writing for dannychoo.com and wish I could spend more time writing but have made a sacrifice to write less so that I can concentrate on building my company. There is so much huge momentum right now that if I don't keep the momentum going then it could all collapse and we would be back struggling to get through the rough seas again.

With so much press of late about dannychoo.com and my company, a load of client requests have come in at the same time and I need to get more hands on deck to help out. Finding folks fit for the job is not easy and it does not always go well. Even the General Manager at Amazon made a few hiring mistakes too - some baaaad ones ^^;

If you find that you are trying to do too many things, stop and take a look at where you want to go. Are all the things that you are doing making a difference in getting you to your destination?
Could it be that 80% of progress is made from just 20% of the things that you are doing? If so then you need to concentrate more on that 20% and make a sacrifice to drop the rest - its tough to drop stuff that you want to do but once you train yourself to do so then it gets easier because you start to see the results.

Have a look at the Pareto Principle over at Wikipedia to understand this 80/20 phenomenon.

A more simpler way to look at this - I walk into a food court in Singapore (for example ^^;) I see Poh Piah, Singapore Laksa, Char Siew Rice, Satay, Hainan Chicken Rice, Won Ton Noodles, Starfruit Juice, Teh Tarik and moar - I love *all* these foods but unless I get an operation to increase the size of my stomach, there is no physical way that I can eat all of that without causing damage to myself - so I make a sacrifice and eat only what I can.

The key to note here is what I mentioned above - "without causing damage." When we over do it and push ourselves too far, we damage ourselves in some way or another. The body is susceptible to getting sick easily when its tired.
Anyway, I've been babbling on now and should practice what I preach and get more rest.

Just a quick update on other stuff before I hit the sack.
These photos of the desk taken just now after a day of working on the new site design for Otacool 2 - Will announce tomorrow.

We have been working on the new design of the Good Smile site too - tis looking lovely.
Managed to get a Figma and Nendoroid for you for the next giveaway - hope to run that this weekend and announce the Tamaki winner at the same time. You notice that I now chain the giveaway's - winners are announced in the next giveaway.

Also spoke to Bushiroad and managed to get them to give you some goodies too - that will come after the figma and nendoroid giveaway.

Ah, I may need some folks from 12 regions around the world to join me on my own regular show on Japanese TV - details soon.

Don't forget to reintroduce your Dollfie daughter on figure.fm too ^o^ 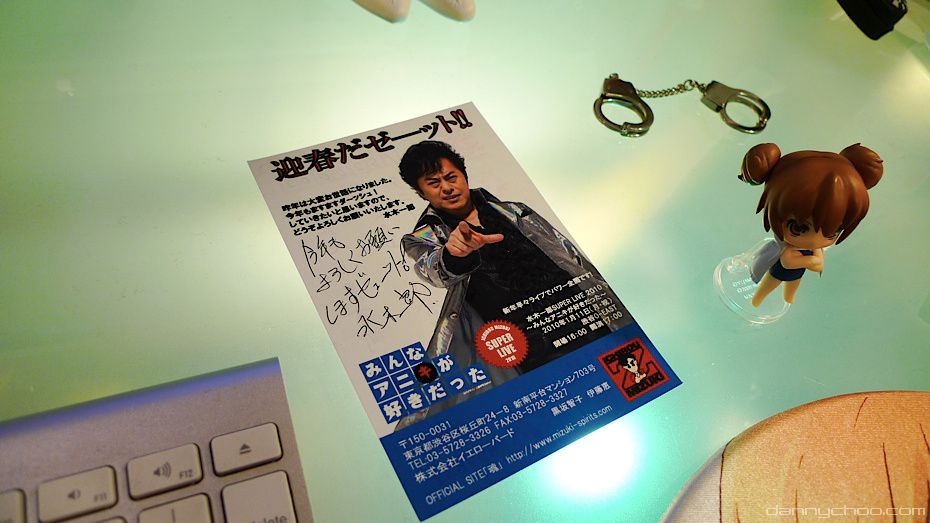 Got a late signed nengajo from Aniki today. He's performing on Monday at Super Live 2010. 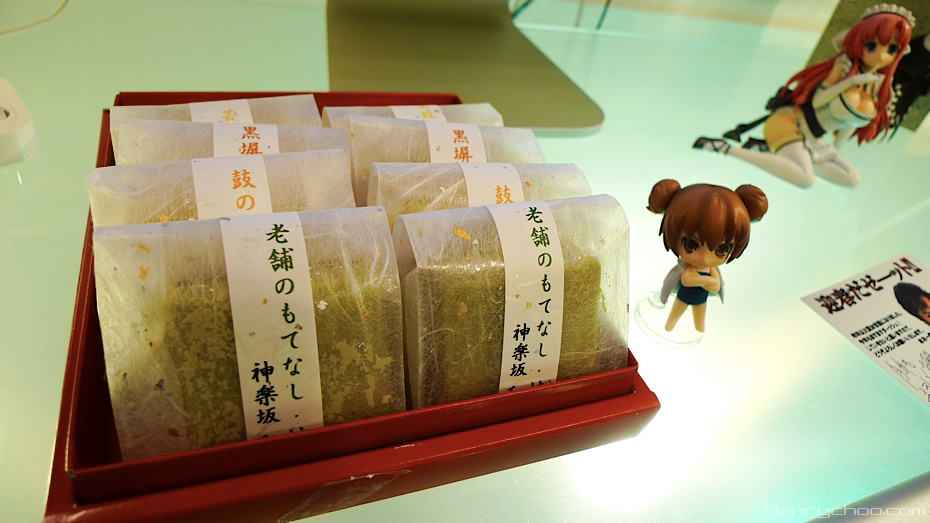 Some yummy cake the folks from NHK brought round. Will have with afternoon tea tomorrow.