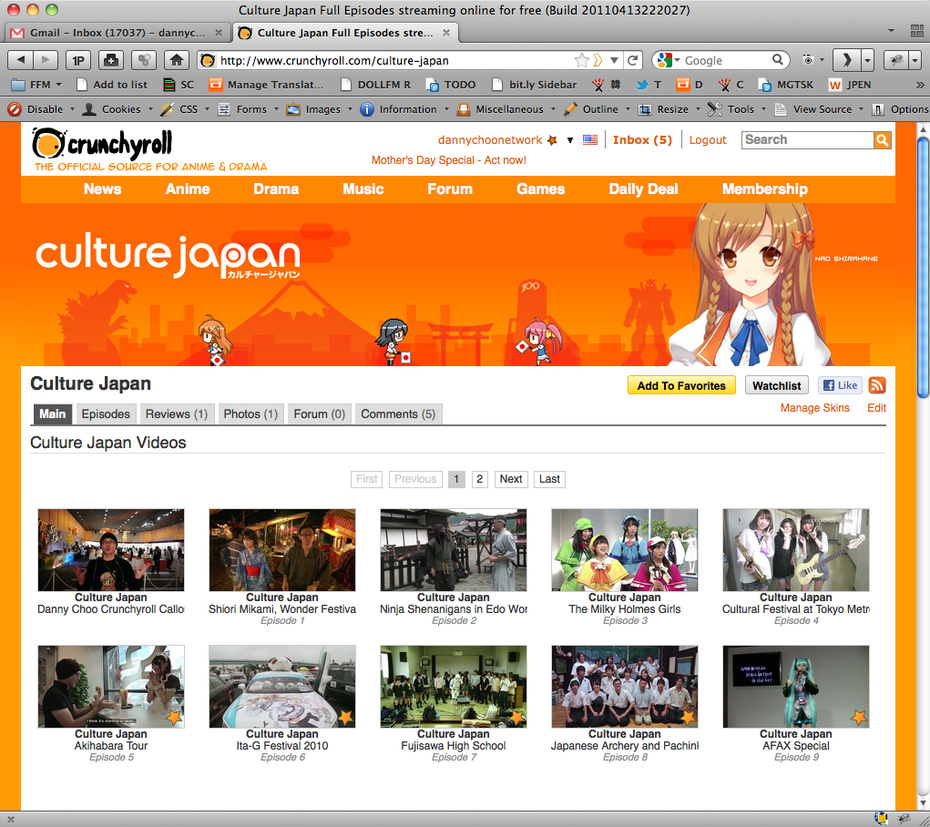 After the Japan broadcast on Tokyo MX TV and the Asia broadcast on Animax Asia, Culture Japan is now available to the rest of za warudo on Crunchyloll.
For folks who are not beknowist, Culture Japan is a TV show that I direct and present on that introduces Japanese Pop Culture and the more traditional Japan. Filming Season 2 as we speak and will be on air on Tokyo MX TV and Animax Asia this October.

You can check out the Culture Japan Channel or jump to each episode below.

The very first episode of Culture Japan, featuring Shiori Mikami as a guest in studio. This episode brings us to one of the biggest figure events in the world - the Summer Wonder Festival. We also take a look at how exactly figures are made in the Good Smile Company figure factory in China, and finally take a visit to a Japanese Festival.

The lovely Shiori Mikami joins us once again as an in studio guest as we take look at Edo Wonderland in Nikko, where one can experience life just as it was in the Edo Period of Japan, as well as experience life as a ninja! We also take a look at otaku rooms from all over the world.

This episode's guests are the wonderful Milky Holmes girls, who give us a look into the world of Milky Holmes and explain what it's like to be an anime voice actress. We'll also take a look at the festivities that went on at the Tokyo Game Show 2010.

Asanon, the P.R Manager of Good Smile Company, joins us as a guest in this episode. We take a look at a Japanese cultural festival taking place at Tokyo Metropolitan Kokusai High School - there are loads of games to play, a ton of food to enjoy, and even some performances to watch!

In this episode we head out to Akihabara, the holy land of otaku. First we visit a 'clone factory', which prints out 3D clones. Next we head out to Hobby Station - a huge trading card store - where we take a look at what sort of goods they have on sale. We've also got coverage of the Volks store in there too.

In this episode we take part in the 2010 Ita-G Festival - an event filled with 'itasha', which are cars covered with cute anime characters - but there are also bicycles and even motorbikes that also look just as great! We even take a look at how these itasha are made, from start to finish. Afterwards we take a look at Japan's underground bicycle storage systems, and how they are improving space problems around Japan.

In this episode we visit Fujisawa High School and take a look at everything that goes on during a typical Japanese school day - from the various classes, break time, cleaning up the classroom and even afterschool activities, it's just like spending a day at a Japanese school for the day! Afterwards we take a look at a Japanese shopping street, where you can find all sorts of goodies, from food to 100 yen stores.

In this episode we visit Yashio High School where we take a close look at 'Kyudo', or Japanese archery. We then head to the headquarters of Sammy, a company who create pachinko machines and are also the creators of the popular Twin Angel anime series. After learning a little about pachinko we then head out to a real pachinko parlor with the adorable Sammy girls and give it a go!

This week we visit Singapore and take a look at the 2010 Anime Festival Asia, which featured a number of famous Japanese music artists and voice actors, figures, cosplay competitions, trading card competitions and much more!

In this episode we are joined by the beautiful Eri Otoguro as we take a look all over Shibuya. We have a look at all sorts of places you can do some shopping - from the famous '109' building which is filled with all the most current fashions down to the popular otaku store 'Mandarake'. We even take at some of the wonders you can find in the Shibuya electronic stores.

In this episode we make a visit to Production I.G. where we take a look at how anime is made - from the frame drawing to the coloring. We then visit Yuko Azami-sensei, an illustrator responsible for creating Danny's mascot character Mirai-chan! Finally we pay a visit to 'Web Technology', who are the developers of the software 'Comipo', which helps anyone make manga quickly and easily!

In this episode we take a look at how the various food samples displayed all over Japan are made. After that we head down to the headquarters of Obitsu, a company responsible for making absolutely lovely dolls, and they take us through the process used to make dolls. Finally we also head to a traditional Japanese inn or 'ryokan', where we take a look at how one should spend their day when staying in one of these traditional rooms.

Episode 13 + 14 will be uploaded at a later date. The first 6 or 7 episodes have my profile at the beginning which become tedious after a while but my producer insisted that we put them in for the Japanese audience - will make sure they are not there for the second season!
Each show runs ads at the beginning which I cant do anything about - I've turned them off for my YouTube channel but Crunchy does need to make a wee bit O cash to run the service so hope this is fine with you.

Trailer for the first season below.

And a 1 hour digest below which includes some of episode 14.

Behind the scenes Culture Japan photos posts below.