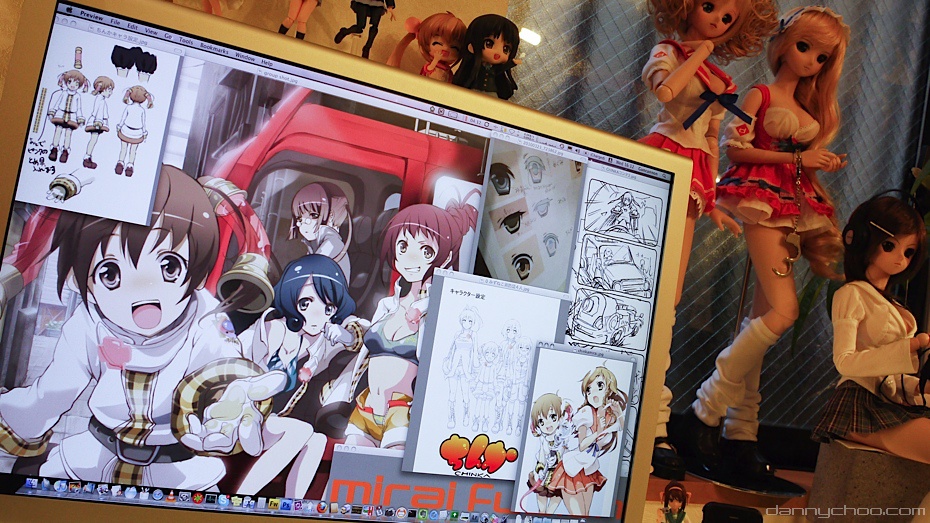 Update - all Chinka related posts are being tagged "Chinka" and live here.

Sorry for the lack of updates for the past two days - just got back to Tokyo last night and have been swamped with non stop mails, skype, phone calls and meetings ^^;;;
Today I finally get to talk about one of the most exciting projects that I've ever worked on.

I absolutely love anime which is a key column of Japanese pop culture and throughout the years of blogging and running Mirai Inc, I've befriended many comrades in the anime business. After learning more about the industry and the production process, I gathered enough knowledge and connections to build up a team of talented people to work with me in a new anime production studio called Mirai Fusion. I'm working with a unit called Hibuse on the production of their original story called "Chinka" - the kanji is 鎮火 which means to "put out a fire." 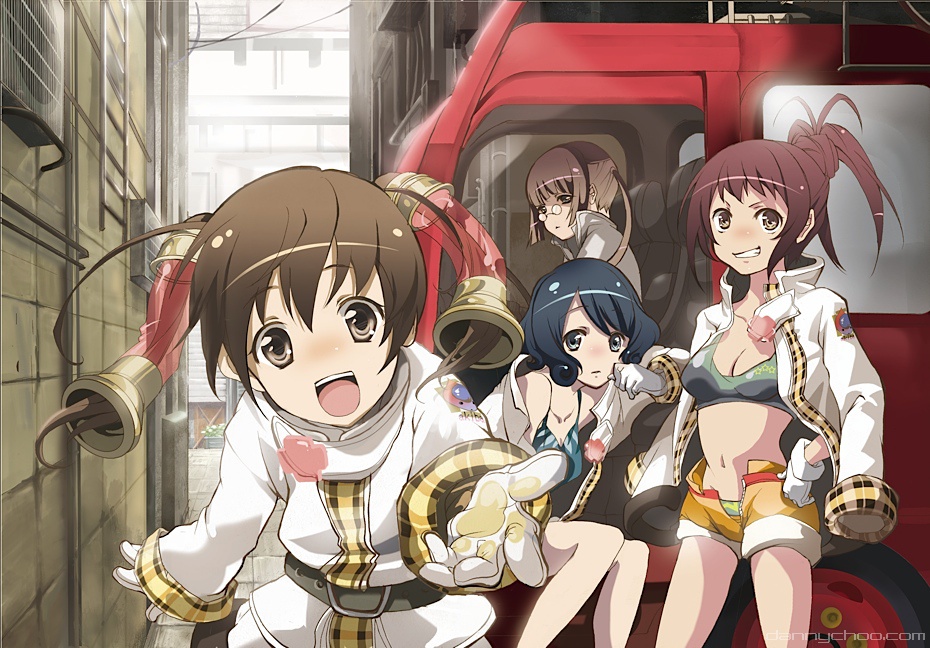 The town of Kiyotaki

The town is densely packed with small wooden buildings so fires spread rapidly. The Mizuneko Fire Brigade uphold the motto "destructive fire fighting" but because of this, many parts of town lay in ruins.

And this is what my press department came up with for our first title.
MIRAI FUSION launches its long-awaited first anime project!
The original animation from HIBUSE will be finally unveiled after a long two-year wait since the conception of the story. The unique and intriguing characters and the artfully written scenario will extinguish the moe anime fever! This commemorative first anime has been developed by Danny Choo and his anime production company, "MIRAI FUSION."

Firefighting action animation!
A breathtaking chase involving the two-wheeled firefighting chopper, "Mist Dragon"!
Mechanical wonder of Mikoto's "Dragon Breath", a monstrous high pressure pump!
A sight-to-see firefighting action with Megumi and Tatsugoro Shinmon!
Chinka's clumsy scenes!
Chinka is packed with exciting firefighting scenes pivotal to the story, which are true-to-life representations of real firefighting action - a must-see for anime fans and firefighting manias alike. We've obsessed over even the tiniest details, and now this action-packed, humongous project is about to begin!And no - Chinka will not be a fanservice anime - maybe at the level of K-ON but that's about it ^^; 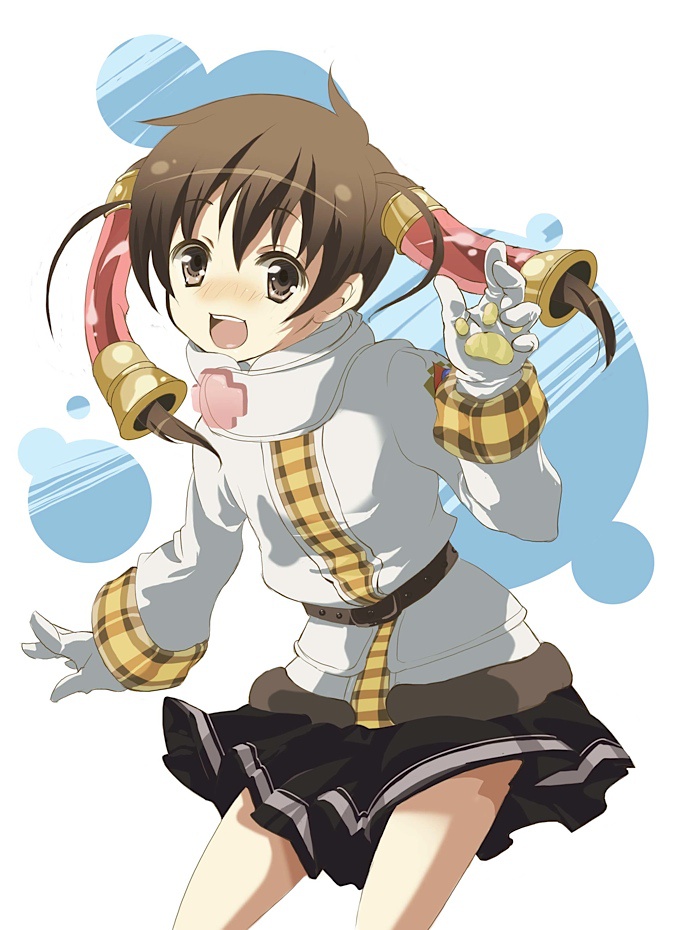 This is the main character Chinka (椿香) aged 14 - the naive clumsy new girl who has just joined the Mizuneko fire brigade. She has the ability to sniff out fires from far distances. 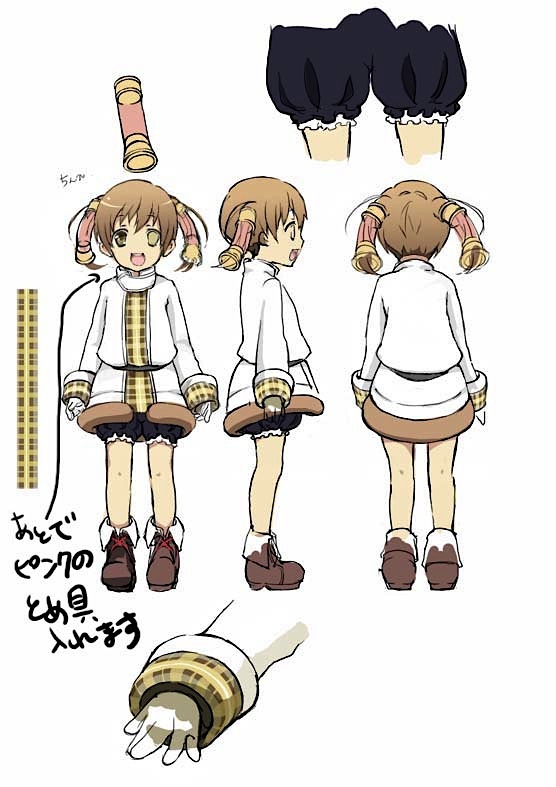 This an example of a character outline that the animators are working from. These are called Character Settei . Chinka has got fire hoses with little fire bells attached to her hair. A sweetie she is. 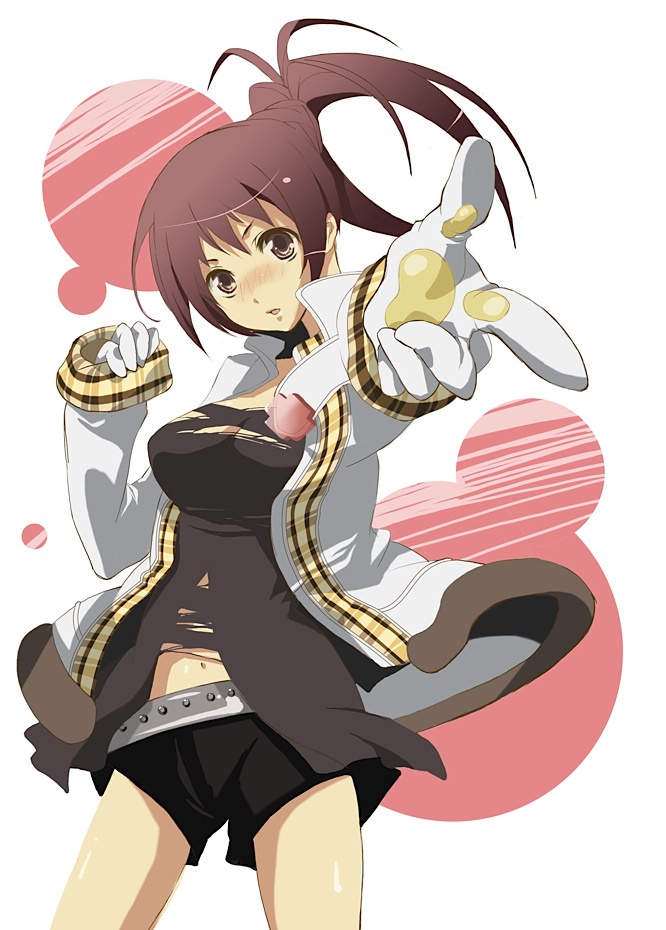 This is Shoka (翔華) aged 16 - leader of the Mizuneko fire brigade. Tough boyish character. Favorite vehicle is her two wheeled Mist Dragon. Her father is the mayor of the town. 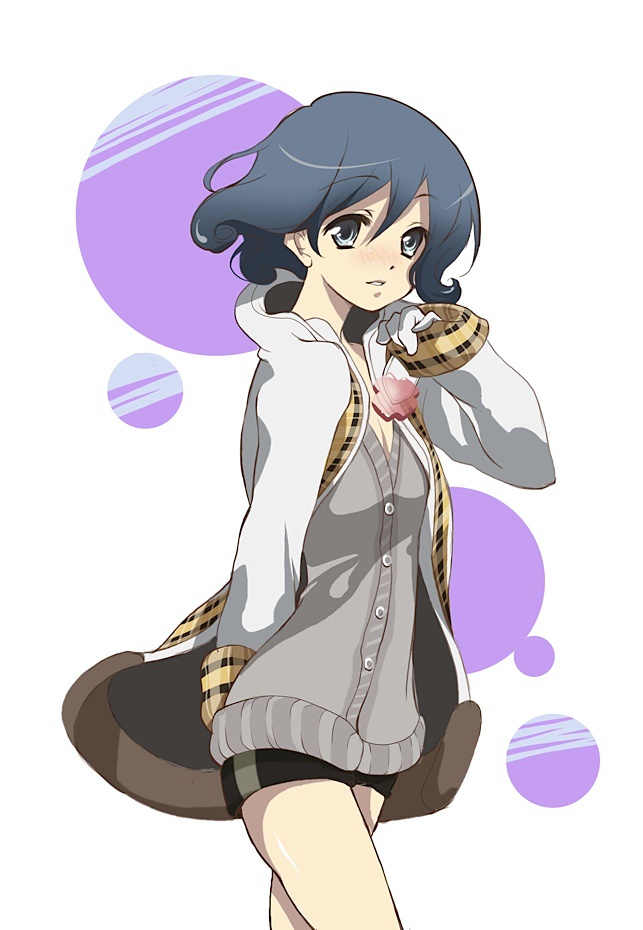 This is megumi (めぐみ) aged 17- the bishojo with a tennen (おっとり天然系) personality - cant describe that in English so just imagine something similar to Miyuki (Lucky Star) and Mugi (k-on).
Megumi is a descendant of the legendary fireman of the Edo period Shinmon Tatsugoro (新門辰五郎). She excels at extinguishing fires and is the only one who can control the fierce Mikoto pumps. 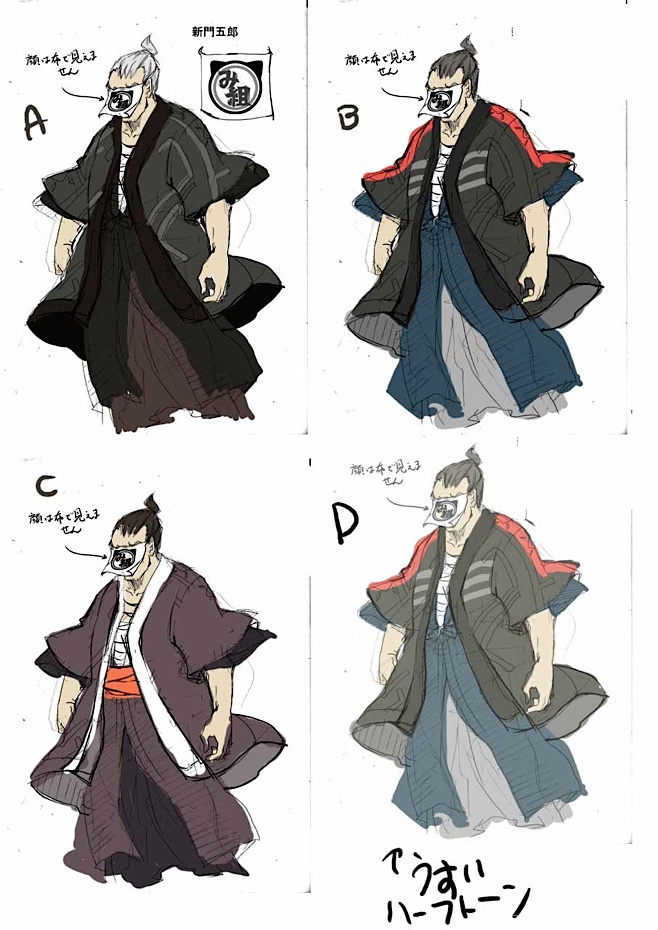 The legendary fireman of the Edo period Shinmon Tatsugoro (新門辰五郎) and great grand father of Megumi. When Megumi is in a spot of bother, he would appear behind Megumi and she would become possessed by his spirit to help her. 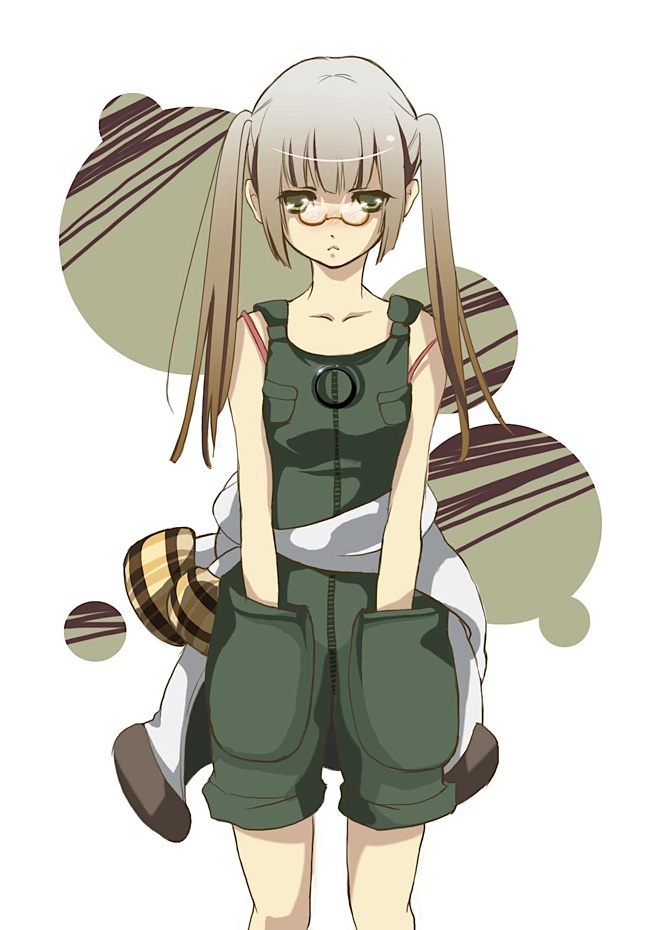 The quiet mechanic Mikoto (ミコト) aged 15. She looks after the maintenance of the fire engines and does a load of customization to them too - all the fire fighting equipment on the engines have been turned into weapons which deliver incredible water pressure.

Now that the four main girl characters have been introduced - which tickles your fancy the most? 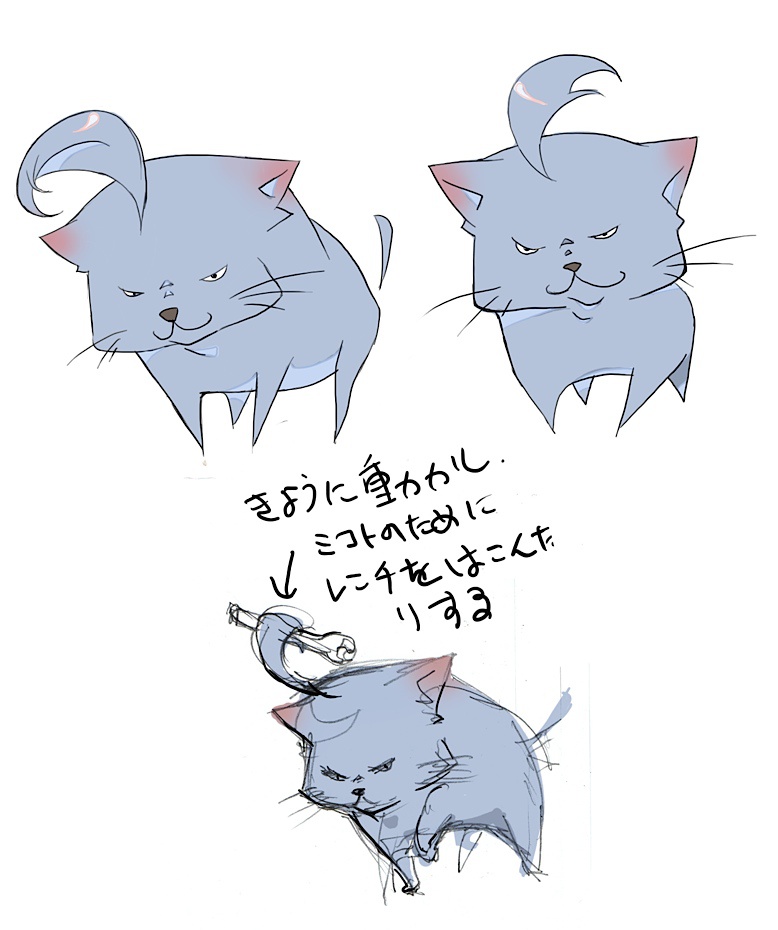 Hibuse-san (ヒブセさん) - the station cat. Was picked up by Shoka at the scene of a fire one day and as been living at the fire station garage ever since. 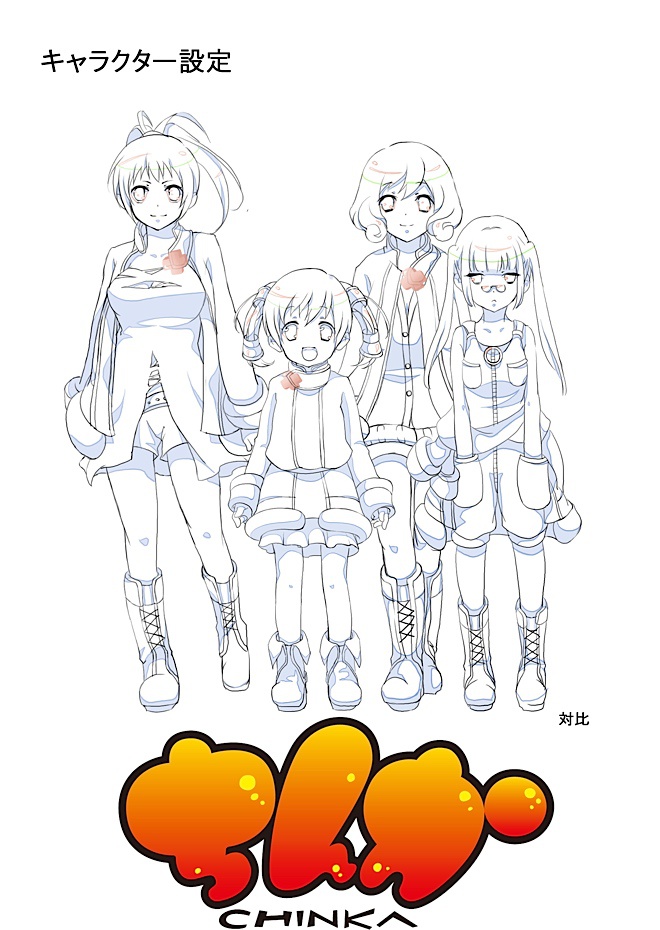 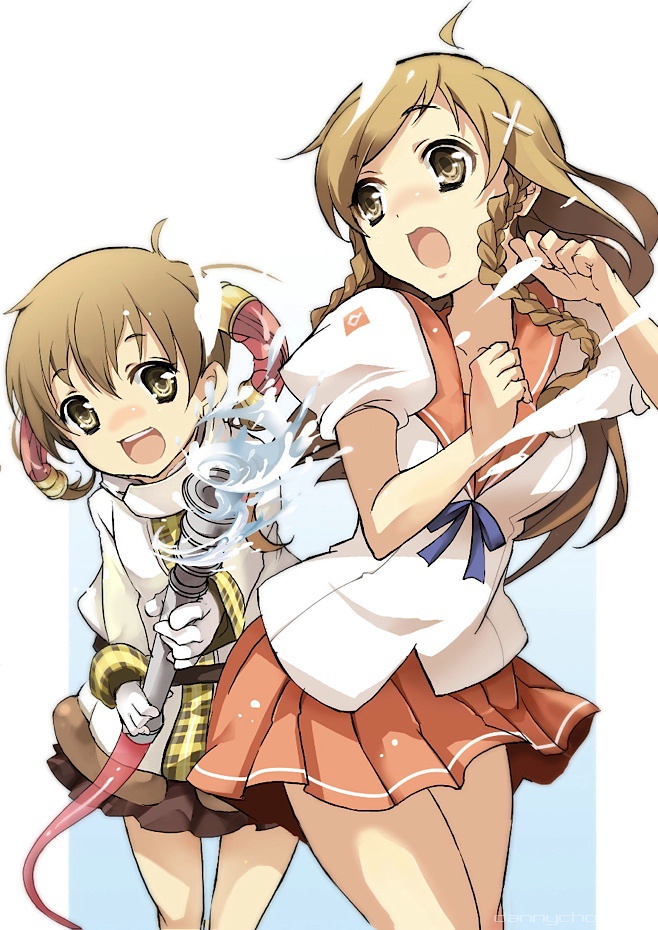 You already know my mascot Mirai (みらい).
In Chinka, Mirai plays the part of a cat loving maid waitress who works at the cafeteria located near the Mizuneko headquarters. The cafeteria is where the Mizuneko girls to go to relax after a hard days work but they tend to run amok and cause trouble for gullible Mirai-chan ^^; 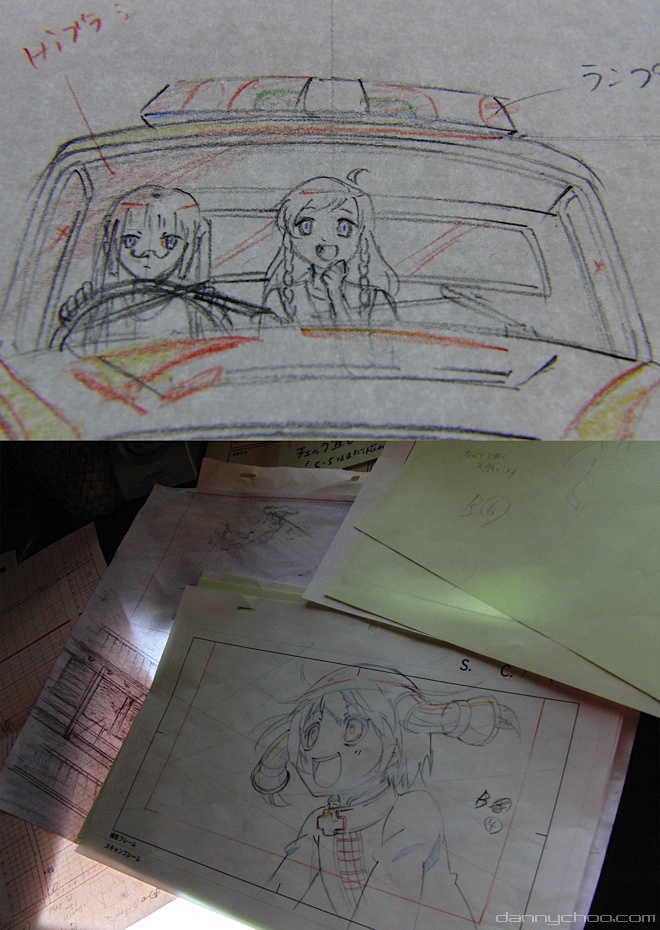 Some sketches of the PV that we are in the middle of putting together now. Mirai has always been fascinated by the customized fire engines built by Mikoto and one day she finally gets to ride on one. 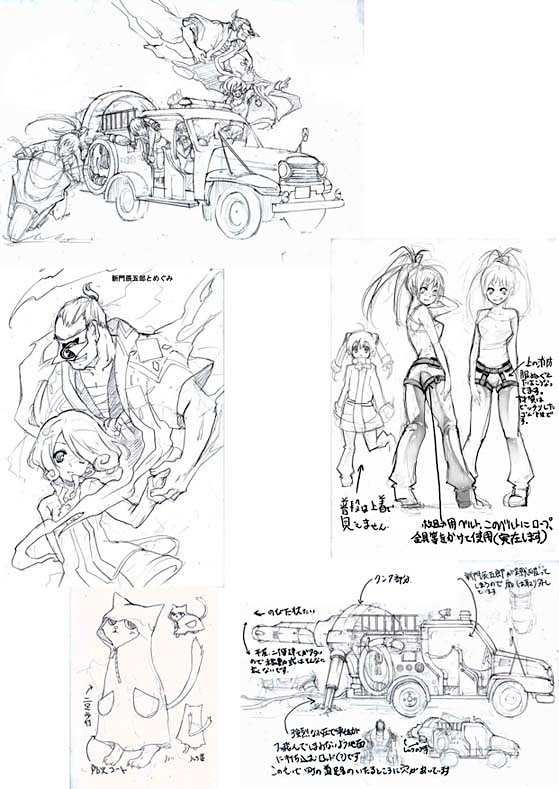 Some concept sketches of the Mist Dragon, Megumi with the spirit of Shinmon Tatsugoro, Shoka, Hibuse-san and the fire engine Downpour Dragon that has rods which shoot into the ground to prevent it from shooting backwards after the Dragon Breath high pressure water canon is engaged.

Downpour Dragon is filled with sacred water from a shrine called Ryukisui (龍奇水). 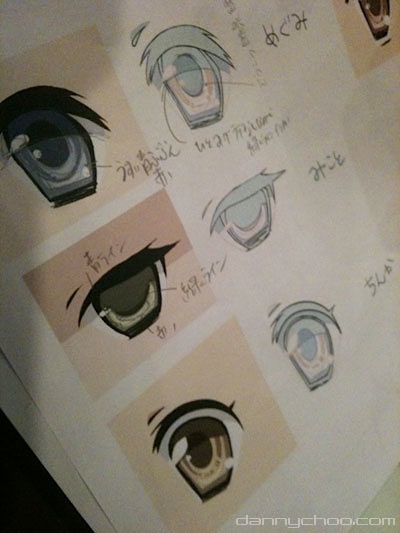 The most important part of the character - the upper set of eyes - the lower pair of eyes being the second most important? ^^;
Here we see the eyes of Megumi, Mikoto and Chinka. 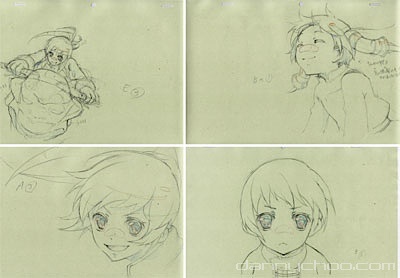 A few more sketches. Shoka on the Mist Dragon and Chinka breathing in a cool refreshing breeze. 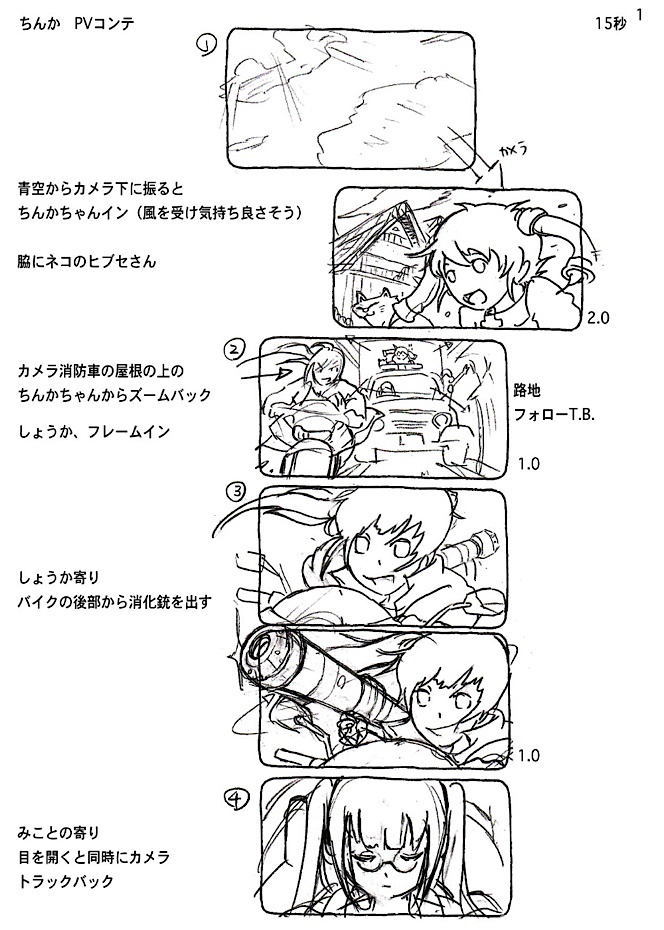 And here is the econte for the PV that we are working on now.
1. Camera pans down from the clear skies onto Chinka breathing in the fresh cool breeze.
2. Camera zooms back from Chinka who is on the roof of the Downpour Dragon, camera then zooms in on Shoka on her Mist Dragon who moves in from the left.
3. Shoka pulls out her fire extinguisher cannon.
4. Camera pan on Mikoto, camera does a track back as she opens her eyes. 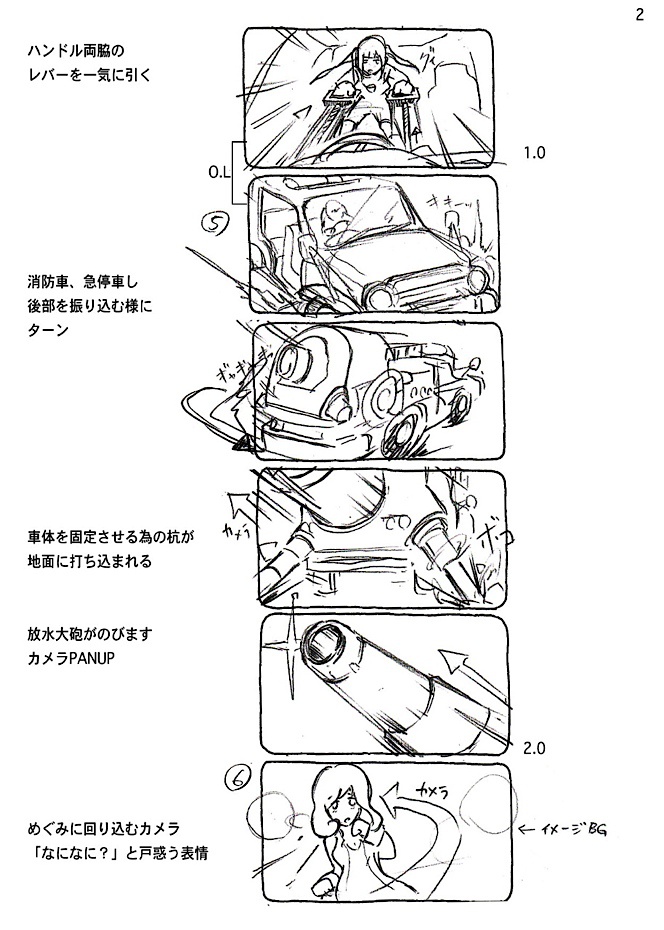 5. Mikoto suddenly pulls on the levers which spins Downpour Dragon around with the back facing the camera. The stabilizer rods shoot out from the back into the ground and the Dragon Breath water canon extends upwards - camera pans up.
6. Megumi looks worried and flustered with a "whats going on?!" expression. 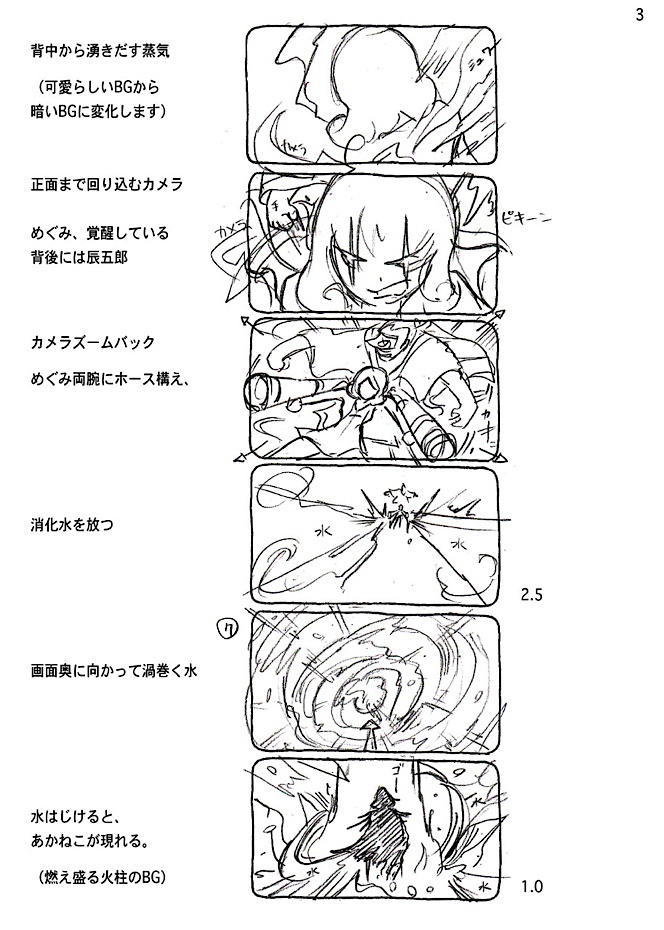 7. Mist emits from Megumi's back. Cutesome music turns sinister. Camera pans around to Megumi's face where she has awoken with the spirit of Tatsugoro behind her. Camera zooms back to reveal Tatsugoro's full shape and Megumi whips out her fire hose canons - two huge jets of water shoots out towards the camera.

Screen is filled with water spiraling into the center where it hits a column of fire - Akaneko appears. 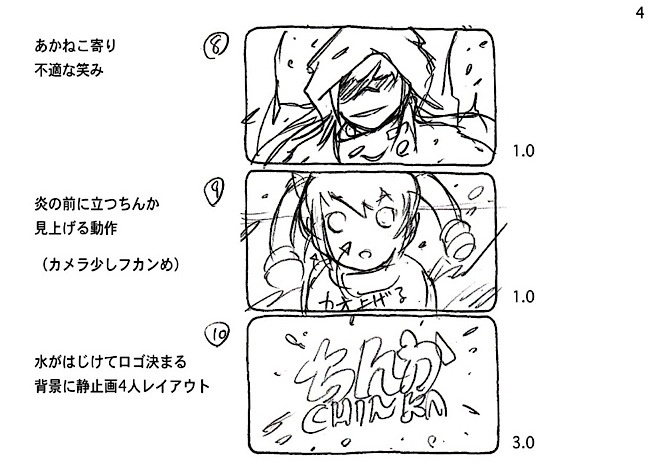 8. Camera pan on Akaneko who gives a sinister laugh.
9. Chinka stands in front of a wall of flames and looks up.
10. Splash of water engulfs the screen and we see the four heroines of the Mizuneko fire brigade - Chinka. 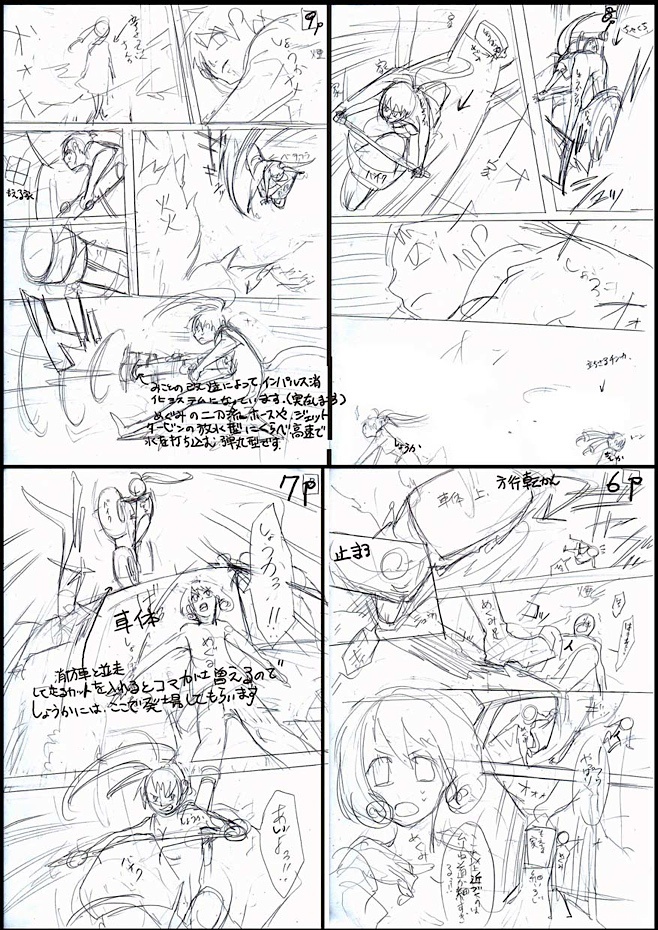 Sneak peak from one of the episodes. 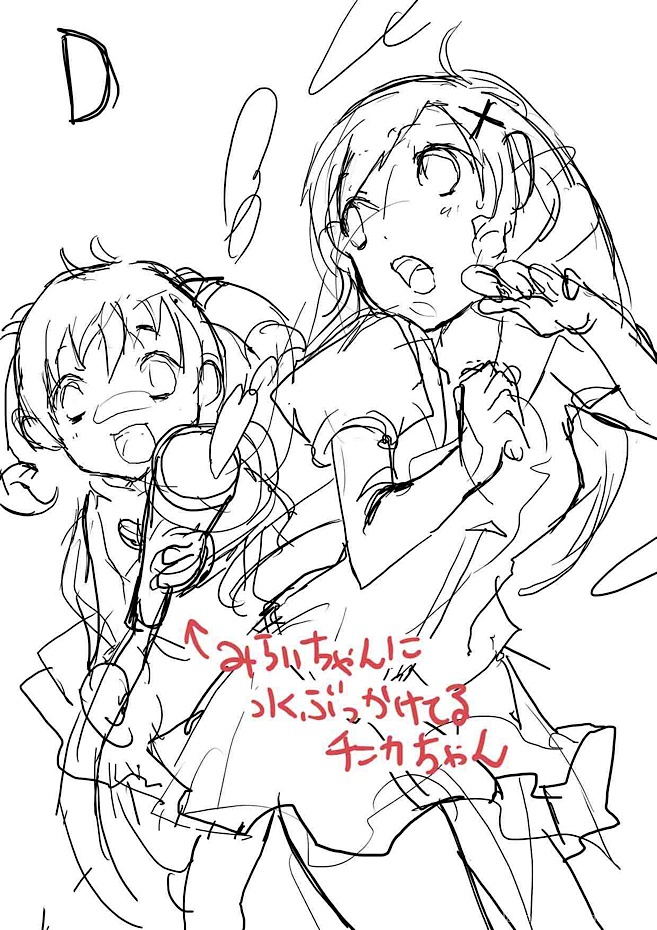 Rough sketch of Chinka splashing water on Mirai-chan - they like to tease her ^^; 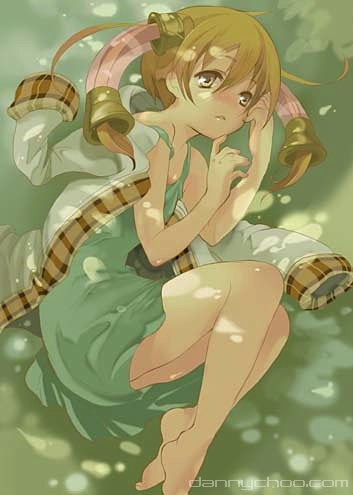 The team is currently working 247 on the PV which should be ready to show you soon - full season to follow after. Many of the animators have previously or are currently working on big titles which you have been watching - their names to be announced after the PV.

Moving into anime production seemed like a natural move for me - my work has enabled me to meet the right people at the right time which suddenly aligned the stars. I love anime and being able to actually produce one has been more than a dream come true.
Chinka is not only an anime but also does things like teach history and also increase the awareness of being careful with fire. This year just happens to be the year where Japanese households are required to fit smoke detectors too - been working with the Japanese fire department on this project shortly after I met their head at the Coming of Age Day 2010.

You have been involved with Otacool 1 and 2 and I want you to be involved with Chinka too. There will be scenes for you to illustrate or color in and we will feature your name in the credits. You get to have your work featured in an anime which I would say is a great opportunity for those who want to expose their work or get into the industry. More details to come. Hope you are as excited as I am!

Me need to go beddy byes now - its nearly 3AM and I got NHK coming over (again!) to film me from the moment I leave my door as I head over to Akihabara to give a tour.