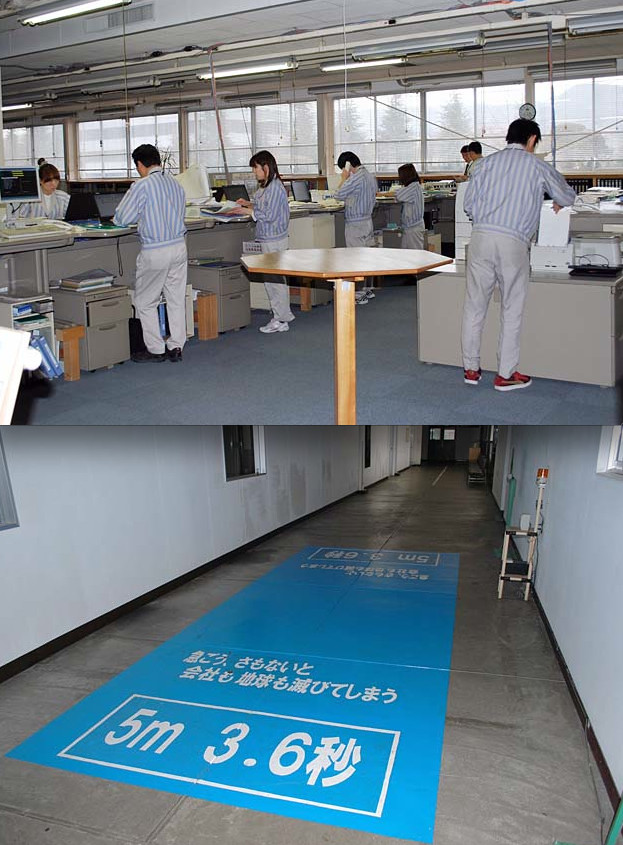 Can you imagine working in a place where the boss got rid of all the chairs and put in alarms which go off when you don't walk fast enough?
Well some of the folks who work at Canon don't need to imagine - its a reality for them.

The president of Canon Electronics Hisashi Sakamaki is also the author of a book called "A company will do well if you get rid of the chairs and computers" - available on Amazon.

According to his book, employees can concentrate on the meeting at hand without chairs and they have been able to half the number of meetings each year.
He also says that by standing at work, the employees develop a closer relationship with each other and that problems are solved much more quicker. The company also saves on the cost of buying chairs as you can see in the photo.

Also in the photo you can see a blue sign on the floor. When Nikkei went to interview the president, while walking in the corridor a siren and flashing lights went off.
The corridor was designed to detect whether employees were walking at least 5 meters for every 3.6 seconds.

The blue sign on the floor also says "Lets rush - if we don't then the company and world will perish."

The president says that the factory is huge and is foolish to waste time walking which is why he put those sensors in place to let the employees feel how fast they should be walking.
Folks at 2ch have put together a comparison between the employees work conditions and a few photos of the boss relaxing in his office ^^;
And what do folks at Itai News have to say about all this?
-Its like a prison
-Its old gits like this that cause damage to Japan
-Whats with the brain washing
-I feel despair for the employees. I'm not buying Canon
-Its like science fiction
-They are not treated like humans
-Hes got no sense - it should be 100 meters for every 9.8 seconds
-Get rid of the tables too!
-This is why suicide rates don't drop
Next time you take a photo on your Canon - think about the employees ^^;