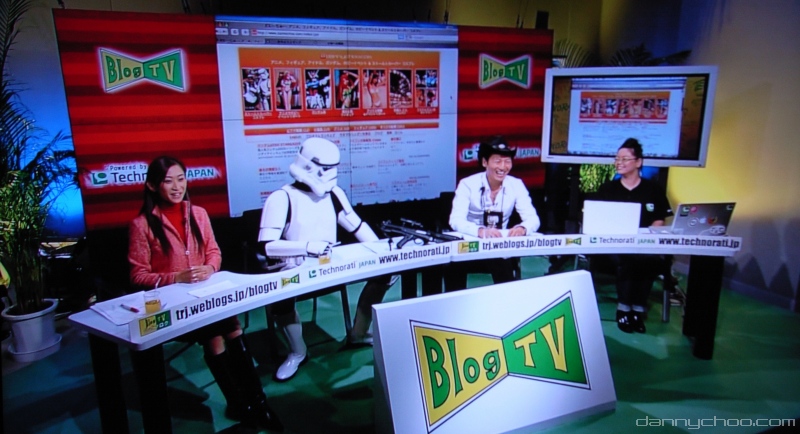 Received a call last Monday night and was asked if I would appear live on a TV show called Blog TV. My answer was "Yes your highness."
Blog TV is live every Friday night at 10 on Tokyo MX and covers the latest hot topics on the web 2.0 scene and general net trivia. I was asked to make a guest appearance in the "Super Blogs" spot to talk about my site, figures and some of my recommended figure sites.
Not used to being on TV live which is why I sounded like a right pratt. I cringe every time I watch it!

The show is actually 30 mins long and you can see the bit I was on below.

Ah, and before I forget, thanks to Roy for taking these pics on his coolsome 101 inch TV.

Update:DarkMirage has done a translation of the show. While he has done an accurate job, the conversation sounds a bit odd as there are some nuances that I would not normally say in English. Thanks DarkMirage! 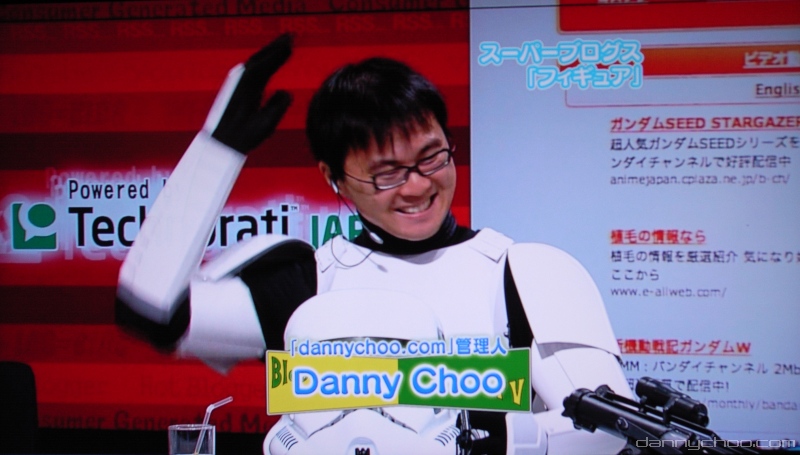 A ton of zits decided that they wanted to be on TV too and my face was full of em. Was not too bothered as I thought that the makeup person was going to cover them up with some of her photoshop powder. Then the rehearsals finished and it was 1 minute before we were on air when I realized that I didnt get powdered up ToT.
Apparently, if you want some make up all you have to do is ask. 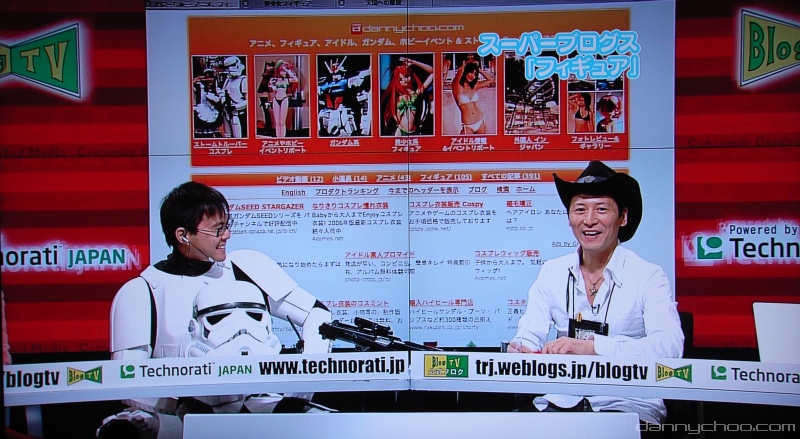 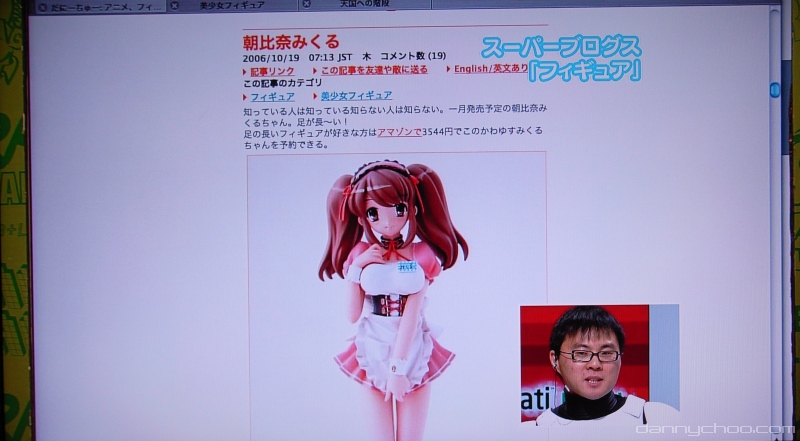 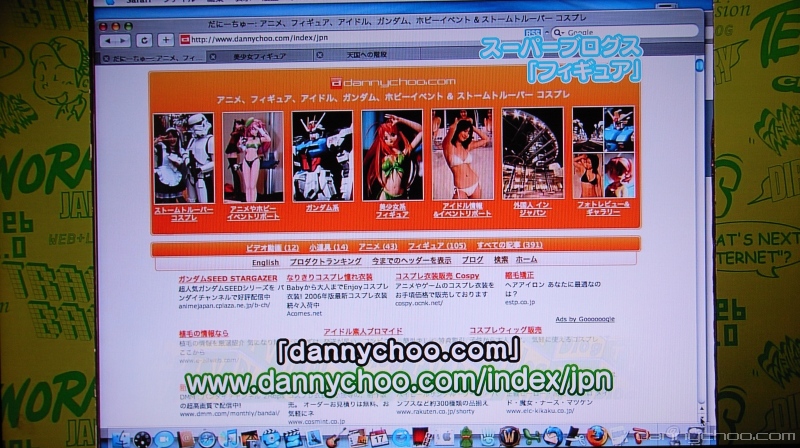 You will notice that when I started writing this blog that I didnt write as many Japanese posts. Since mid last year however, I've been diligent in writing Japanese articles too and now have about 40% of my readers reading the Japanese posts. Looks like it payed off. I do write Japanese only content from time to time so for those of you learning or who read Japanese, you may want to check out the Japanese version of this site too. 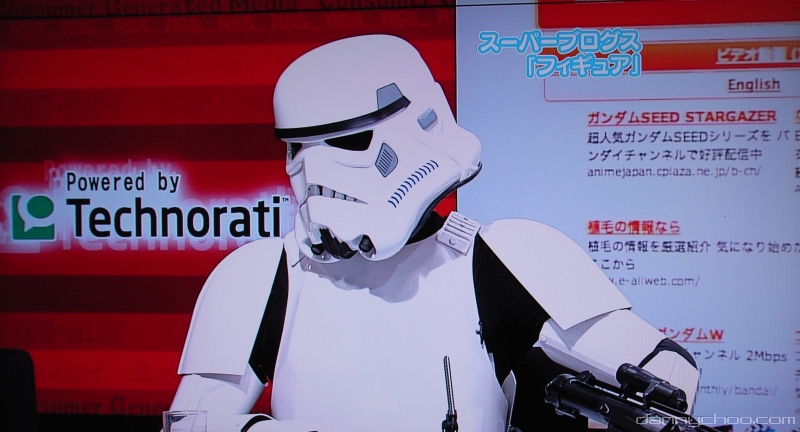 The armor was made lots of noise every time I moved!
I found out that week that Mr Hobby thinner 250 (which I usually use with gundam paint) is great at removing dirt from the armor which was why it was particularly shiny *^^*. 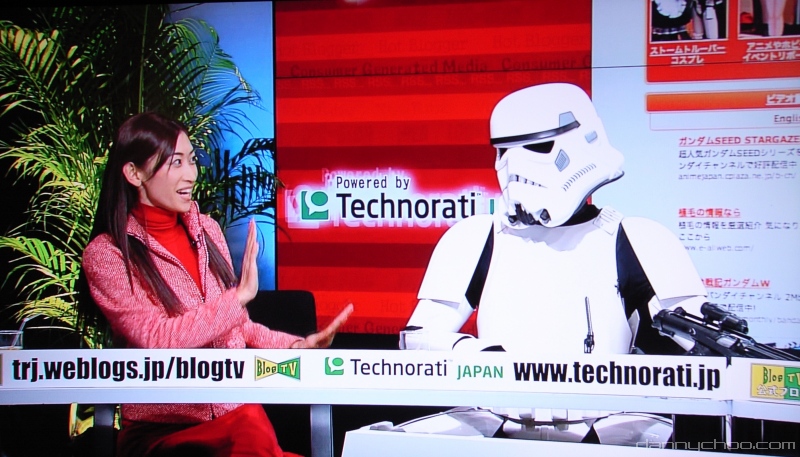 Typical of Eddie to spot that I sat with my legs wide open. Its either sit like that or sit with legs closed and crushed get nuts. Stormtrooper armor is a pain to sit in. But I did manage to drive back home in it ^o^ 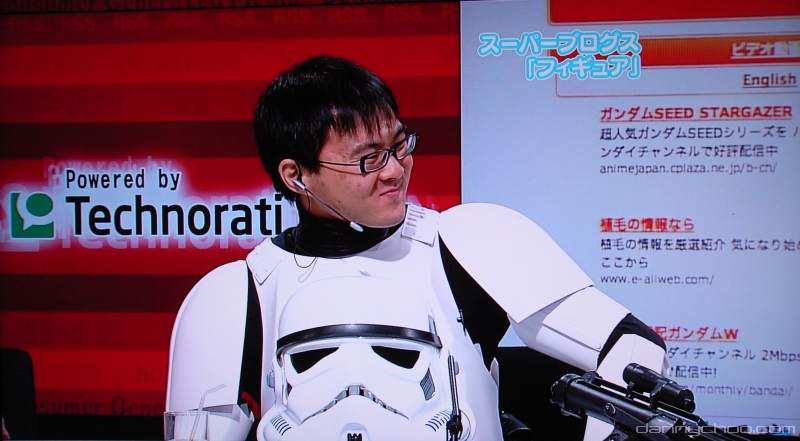 The ear mic that you see is something that I picked up from Yodobashi Camera for 700 yen and is just for decoration. The real mic is the pin mic attached to the chest armor. 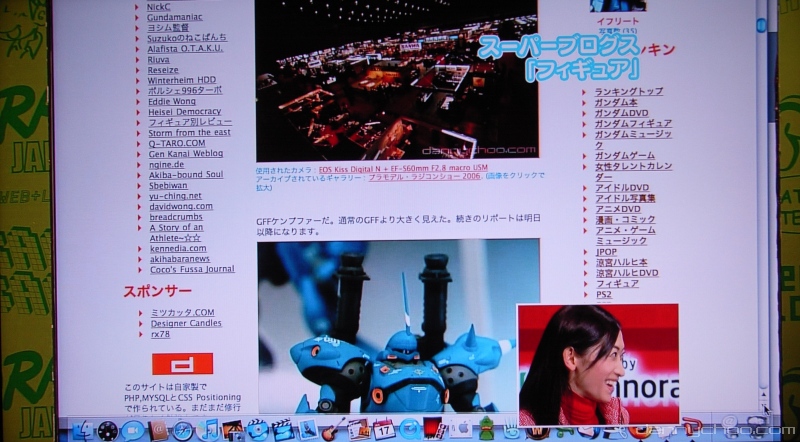 For those of you who have a link to your site in the left column, I suppose you can tell people that your site was on Japanese TV? 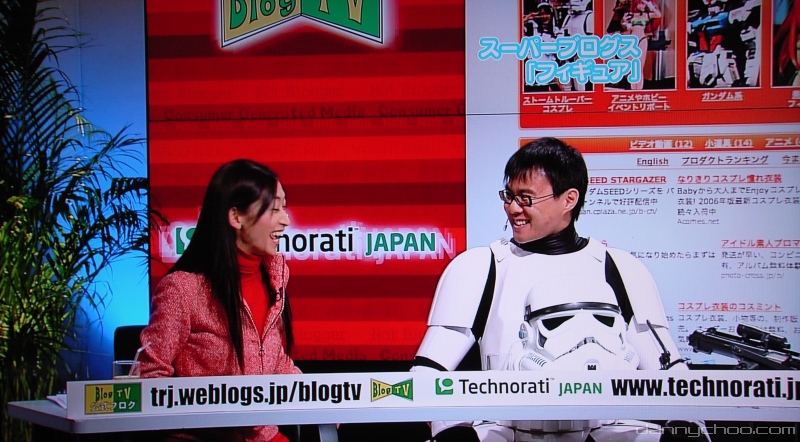 All round narrator Kaoru Kanazawa-san. 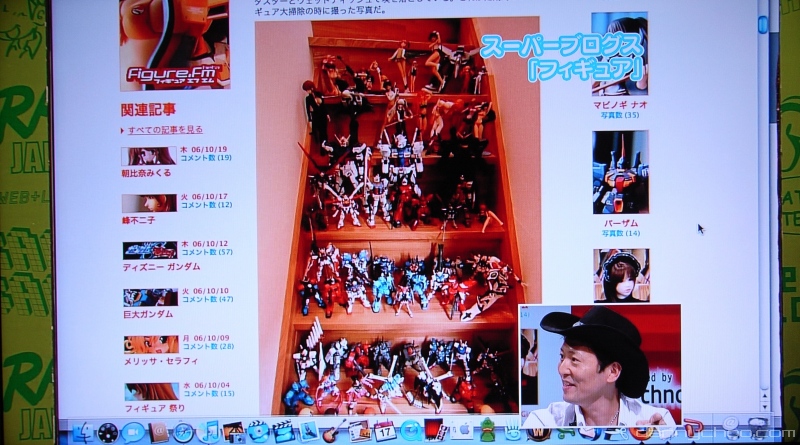 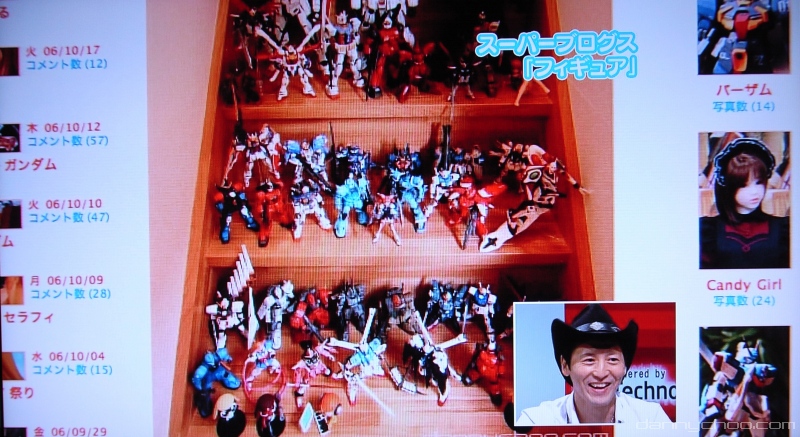 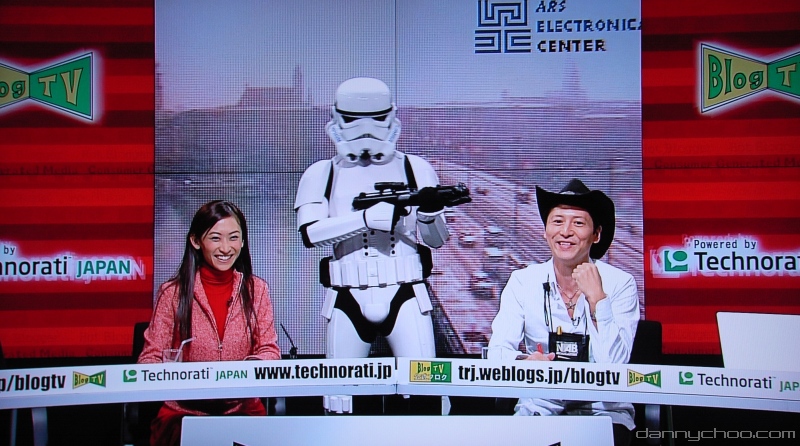 This is the end bit where the guest usually gets chucked off the set but the director decided to have the armor in the background ^^; 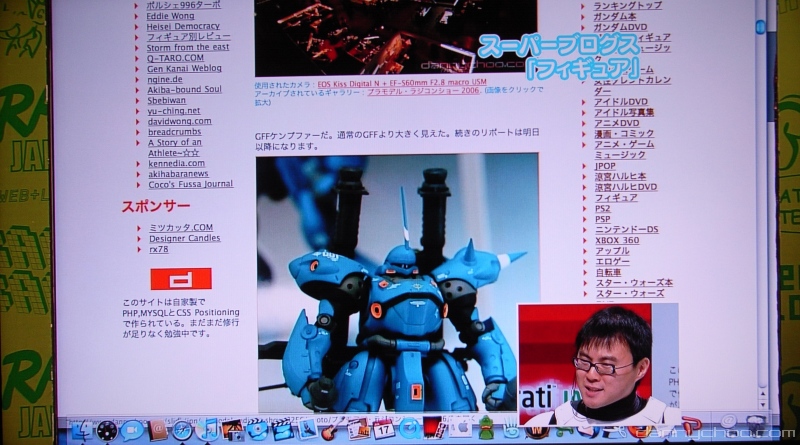 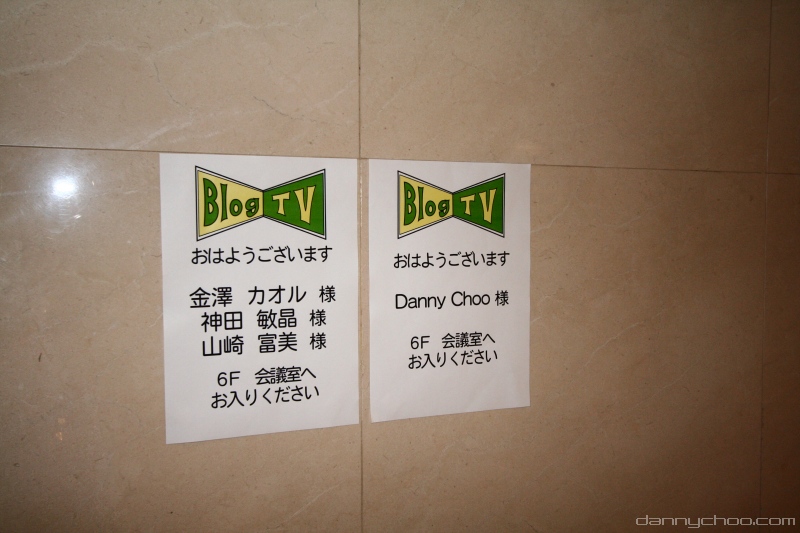 Going to have a peek behind the scenes. This is at the entrance of Tokyo MX. Signs telling the presenters and guests which room to go to. 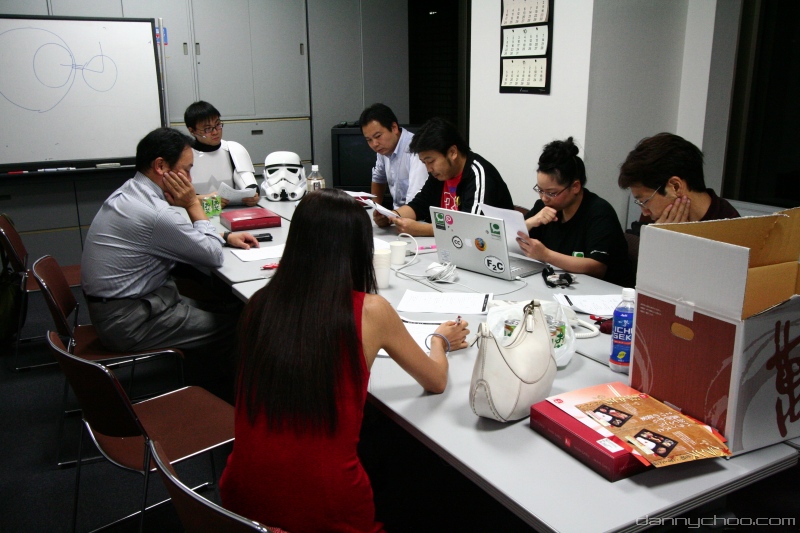 Pre rehearsal meeting with the director, producer and the other presenters. 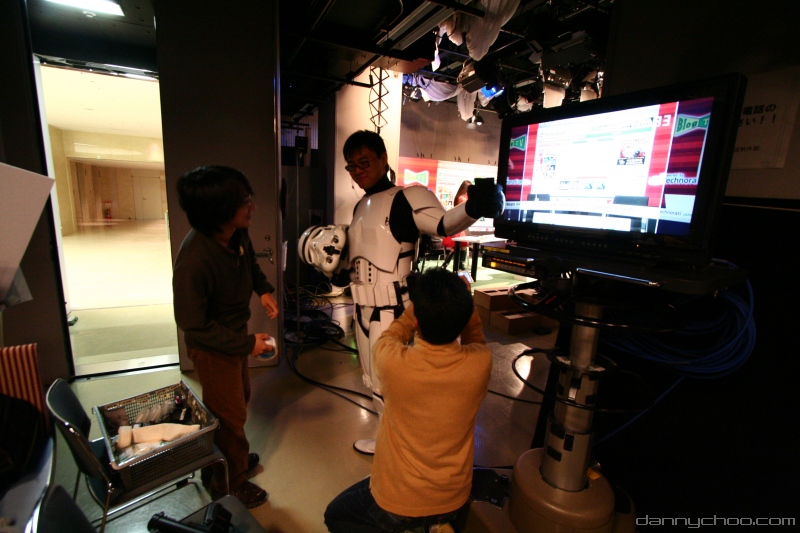 Being wired up with a pin mic. The pouches I have on the side belts came in rather handy which held the mic unit. 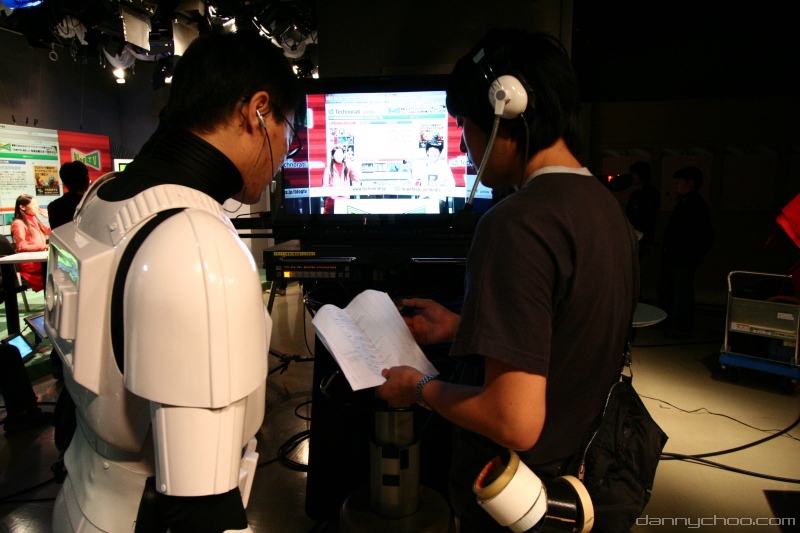 Discussing details down to the second. 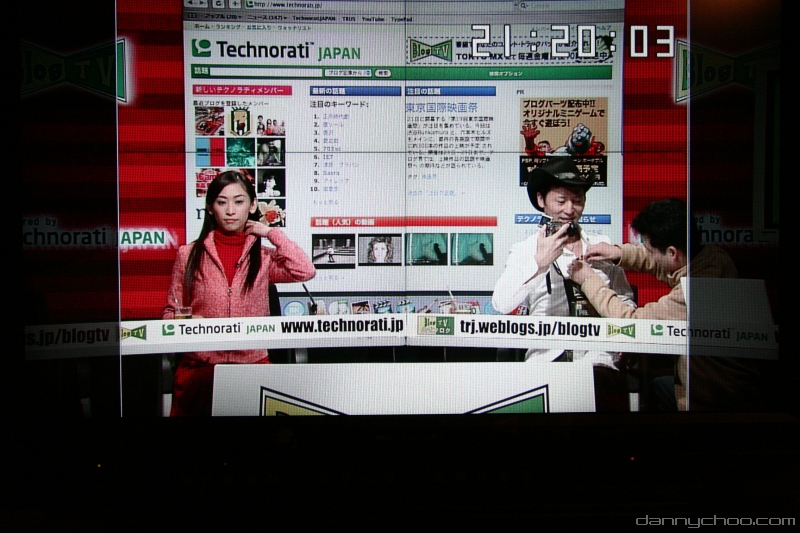 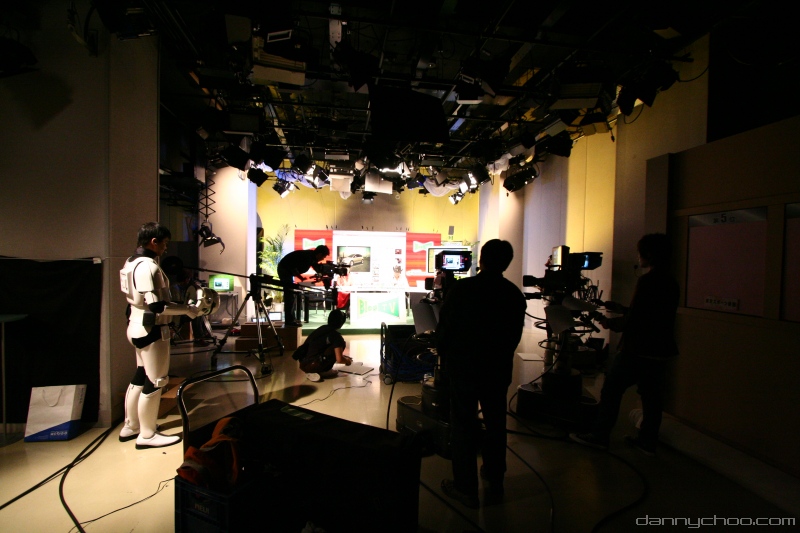 My wife became my manager from this day ^^; She took these pics and I will be taking hers soon as she dons my armor ^o^/~ 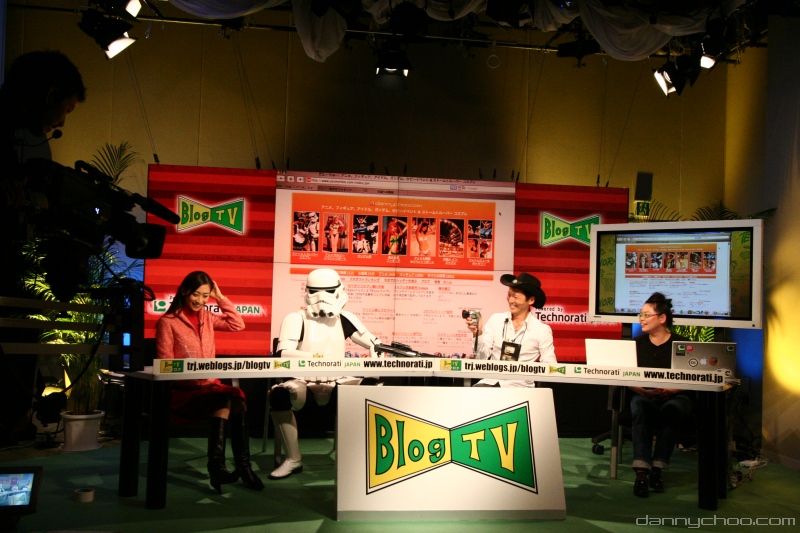 The rehearsals was slightly different from the live version - a lot of it was just ad-lib. 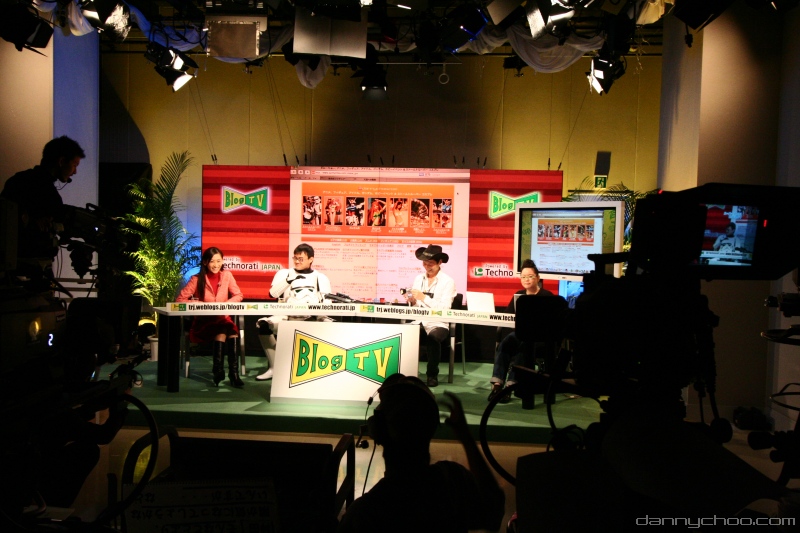 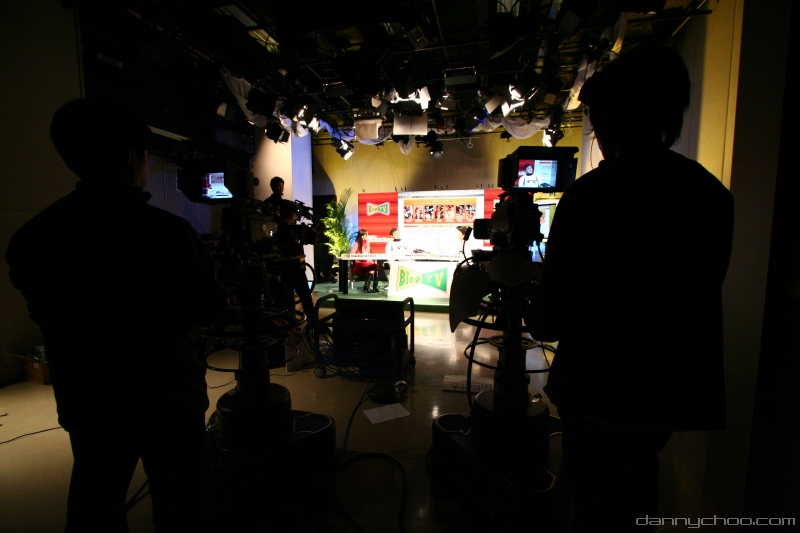 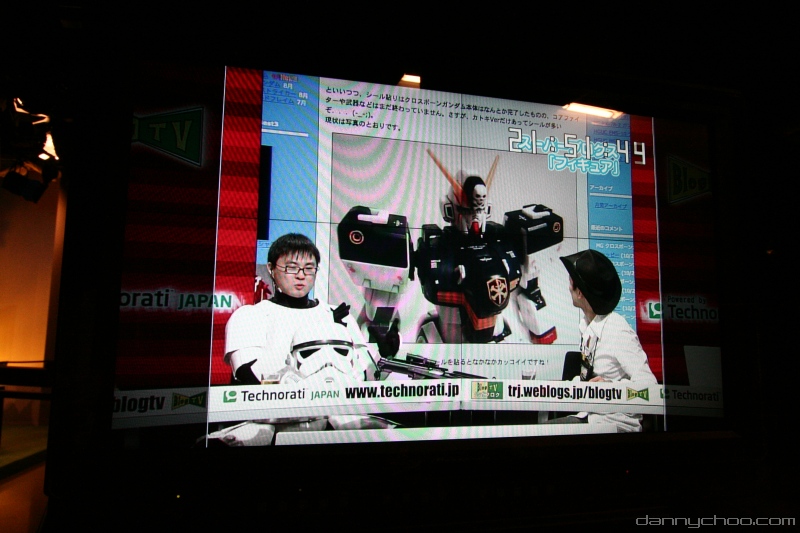 Rehearsals. Didnt get to mention Gunpla Blog on live as we ran out of time ToT. 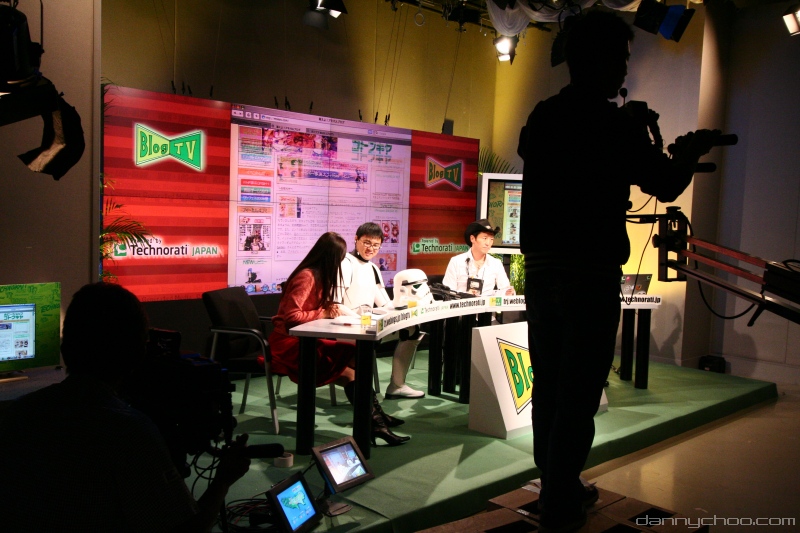 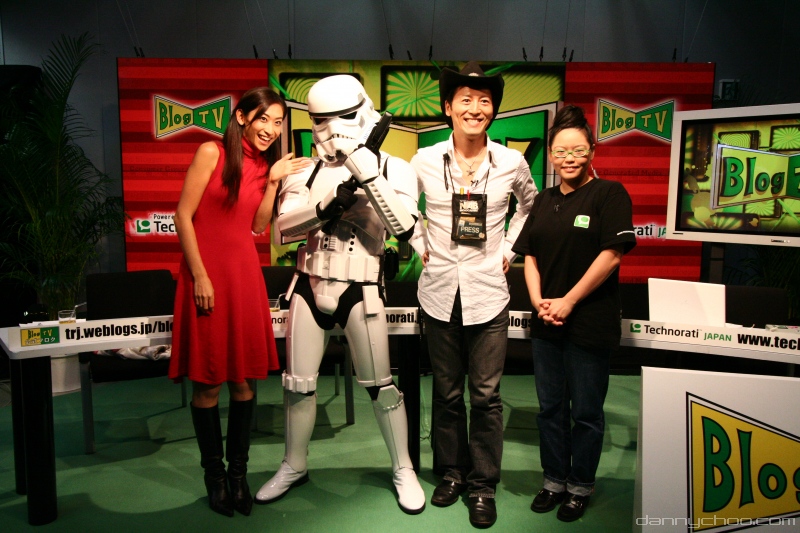 Group shot after the show finished. Kaoru, Toshi and Fumi Yamazaki from Technorati.
I cant remember if I mentioned it before but I used to be a member of Robert Starnowski Management back in the UK and made appearances in a Coca Cola commercial, a Discovery Channel documentary and a channel four drama called Family Money. Todays TV slot reminded me how fun doing TV stuff was and think I want to get back into it. Keep your minces peeled for more ^o^/

BTW, there are about another 50 shots in the gallery for this post.