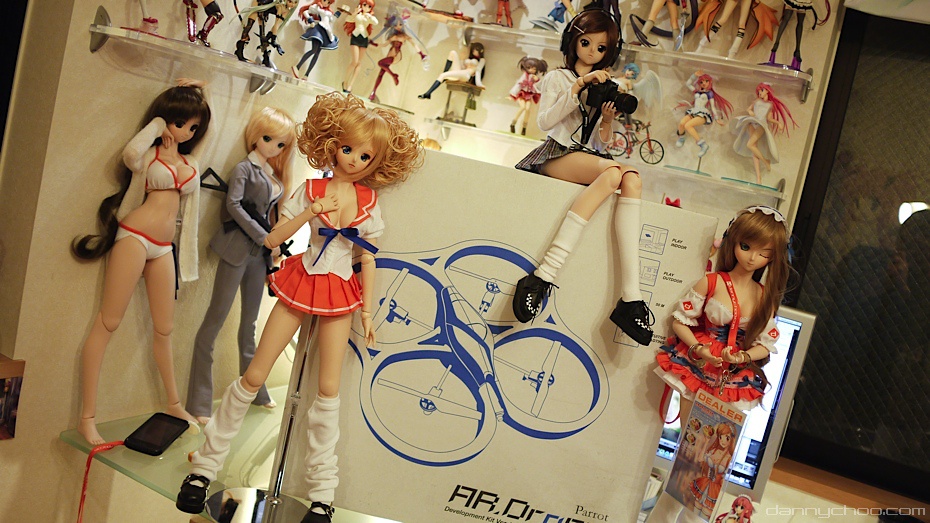 Updating last nights post with the full set of photos of the AR.Drone developed by the French company Parrot.

For folks who don't remember, the AR.Drone is a remote controlled quadrotor helicopter with built in wifi and 2 cameras - controlled via the iPod Touch or iPhone. The AR.Drone also comes with a couple of augmented reality games and there is an API for developers to come up with their own applications. 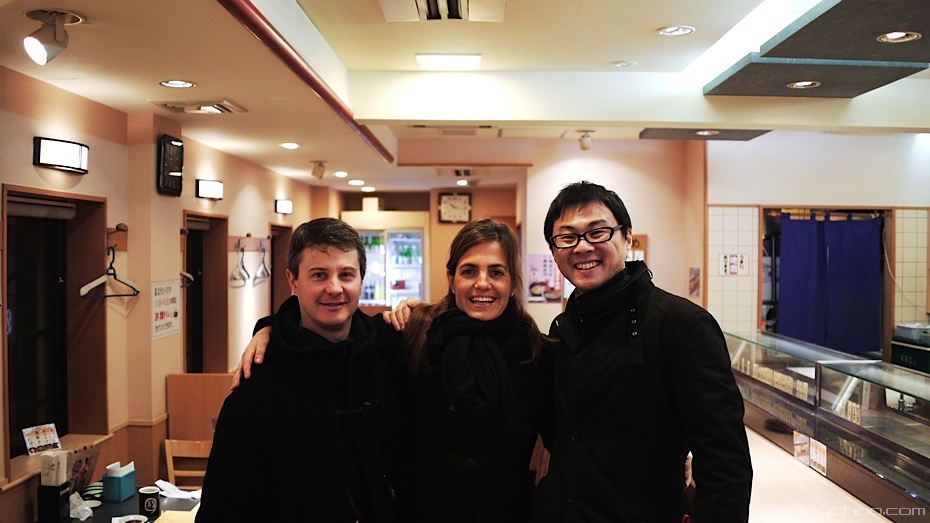 The VP of Marketing and Communications came along with their top tech guy last night with something in hand...
Could not contain my excitement! As you can see from the clip below, my speech usually starts to slurr with repetitions of "oh my gawd" when I see cool awesome stuff ^^; 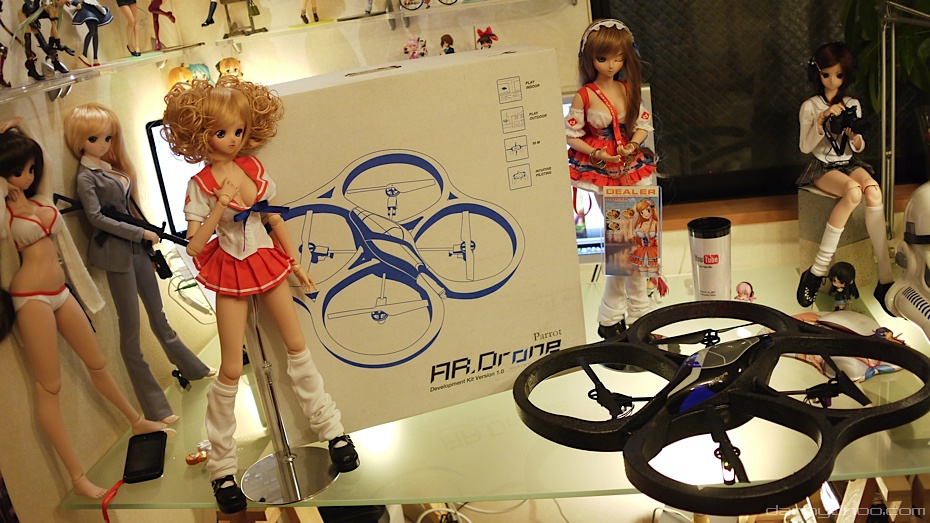 My daughters were very excited to see the AR.Drone for the first time too. Official videos of the AR.Drone in action below. 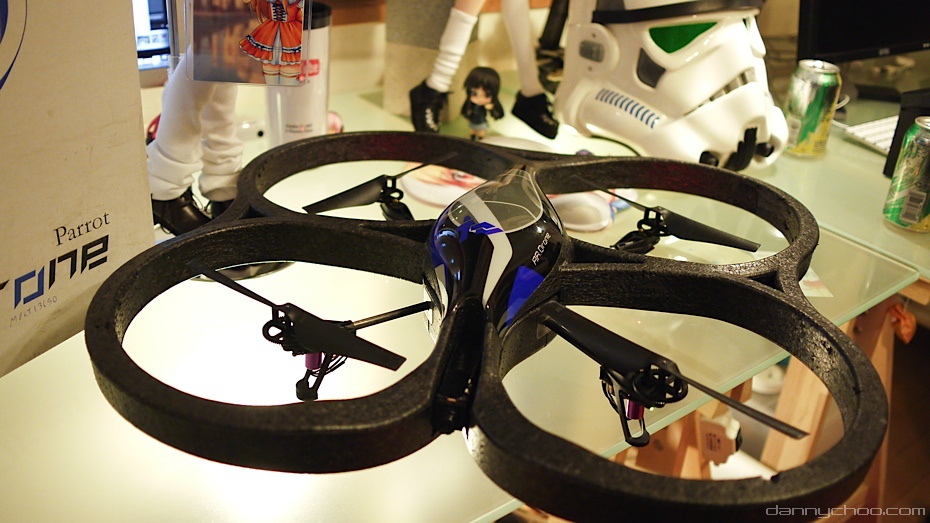 The dannychoo.com branded version will be an Ita-AR.Drone where the hull will be Mirai-chan themed ^^ 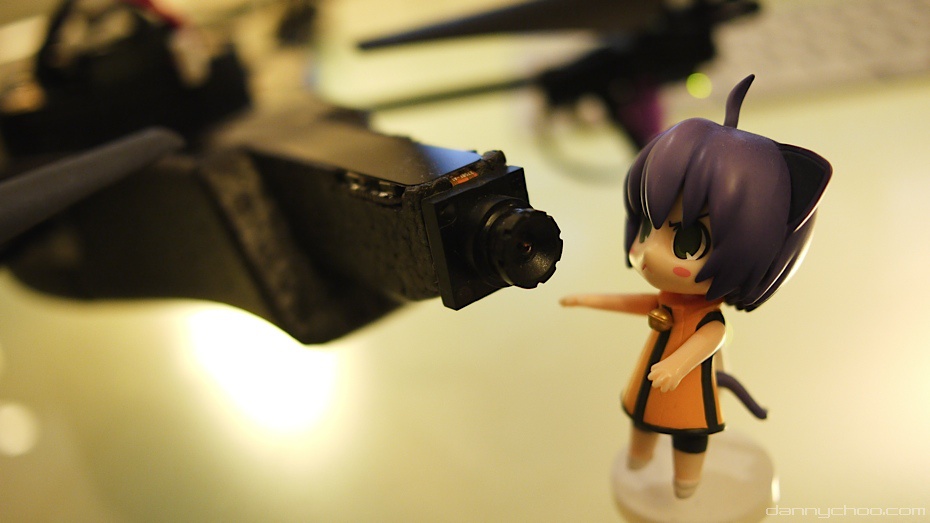 The front camera is VGA and capable of streaming 15FPS to the iPhone or iPod. 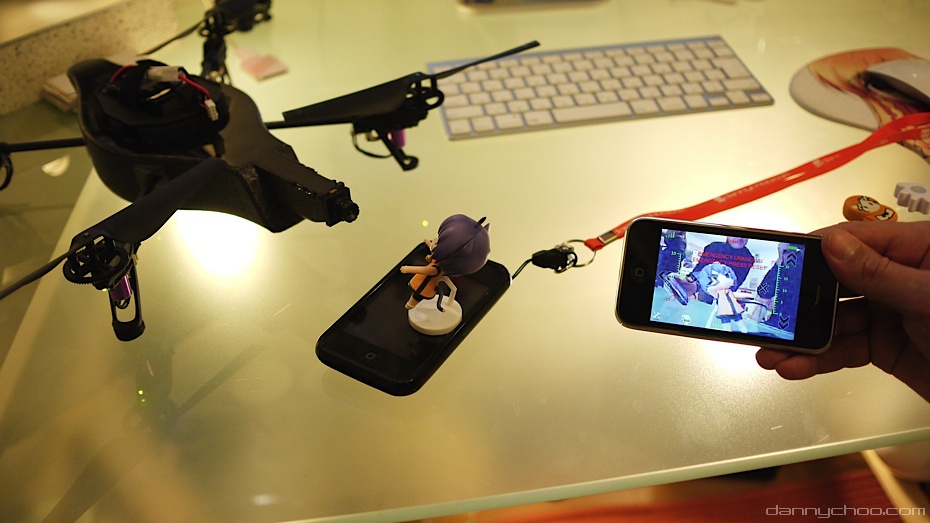 Video is obviously streamed in real time to the iPhone. 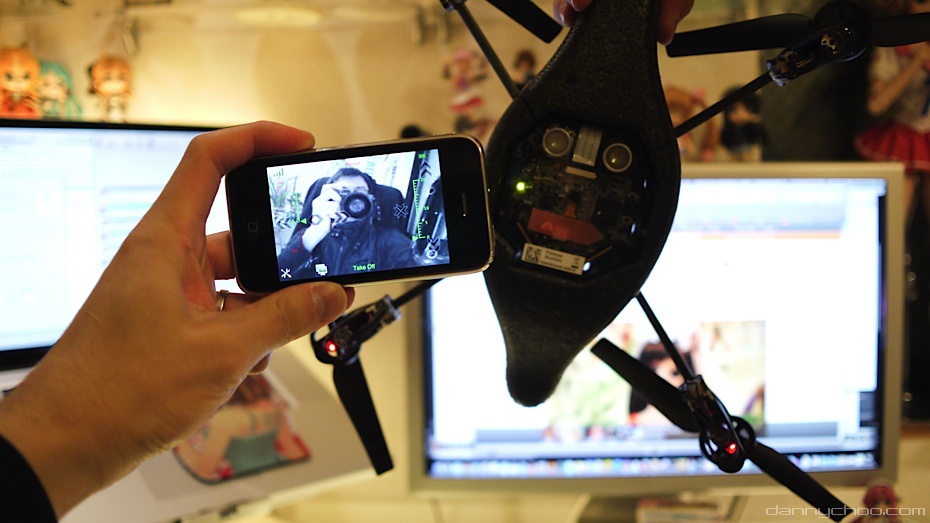 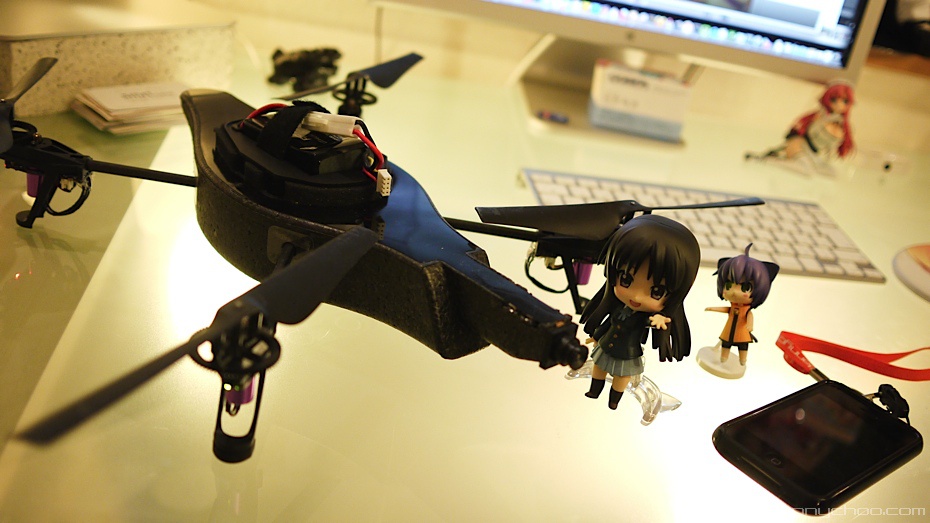 The AR.Drone without hull. 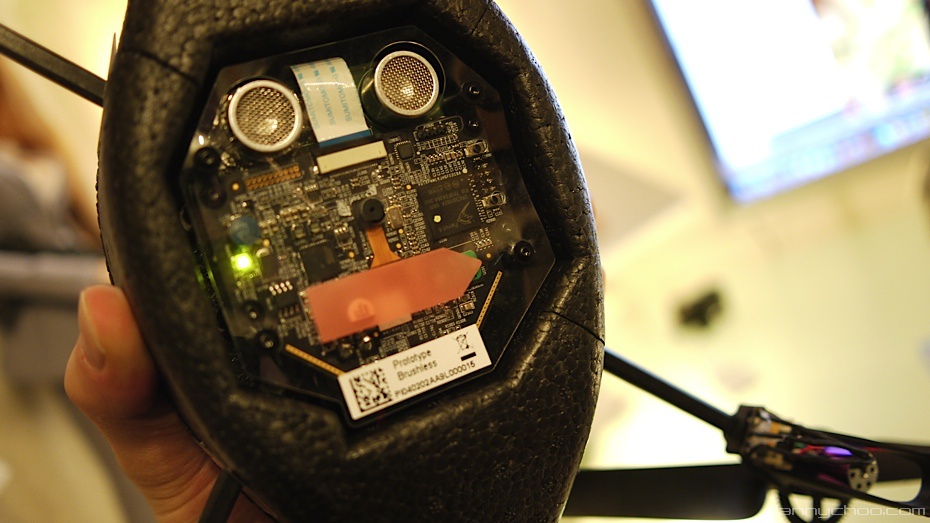 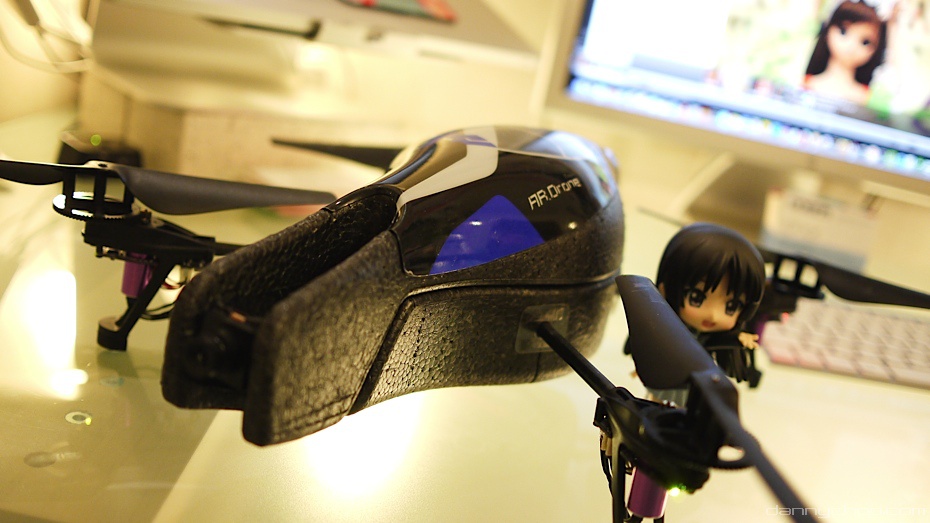 Hopefully will be able to show you the dannychoo.com/Mirai-chan branded AR.Drone by May. 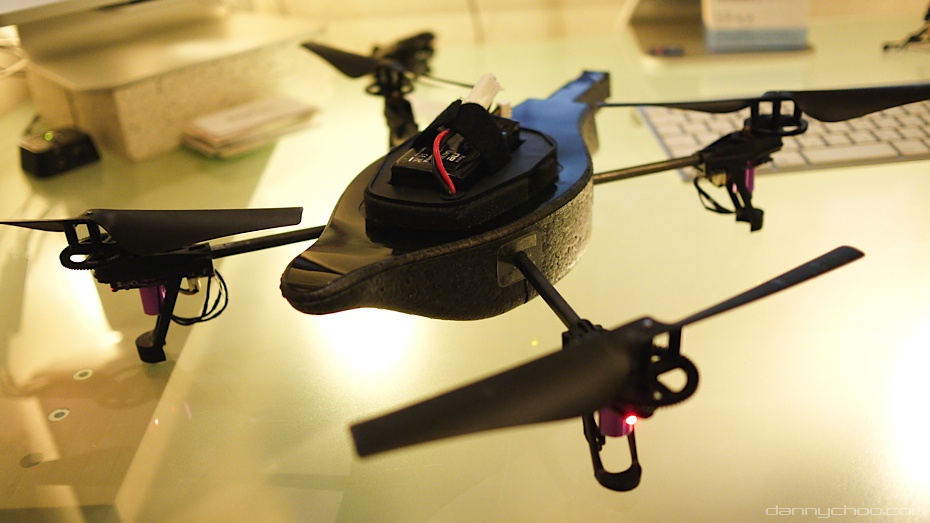 And this is what it looks like without the hull. 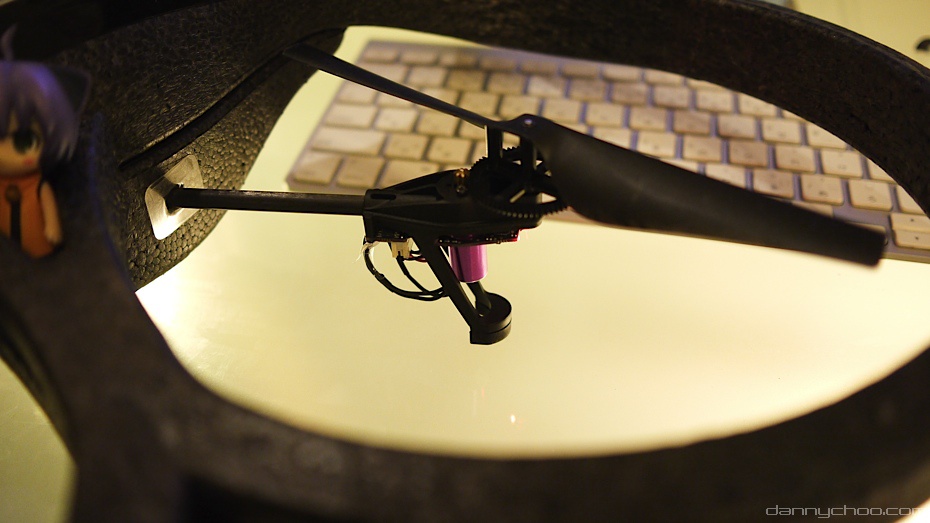 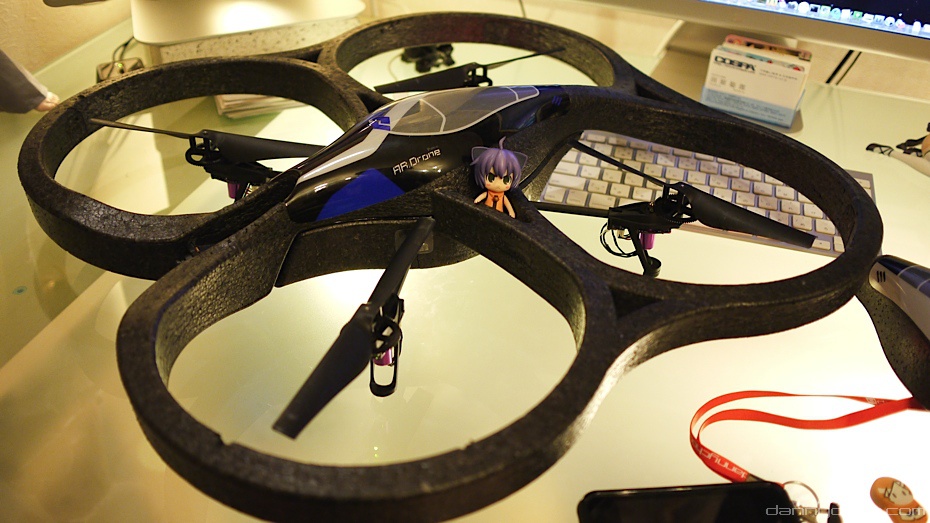 The Indoor hull is essential when using the AR.Drone indoors to prevent daughters heads flying. 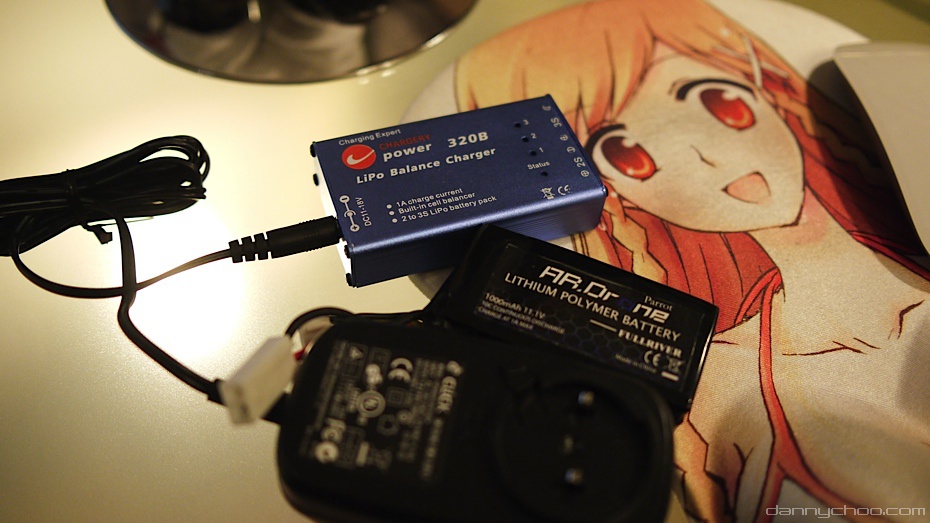 Each of the batteries lasts 15 mins. 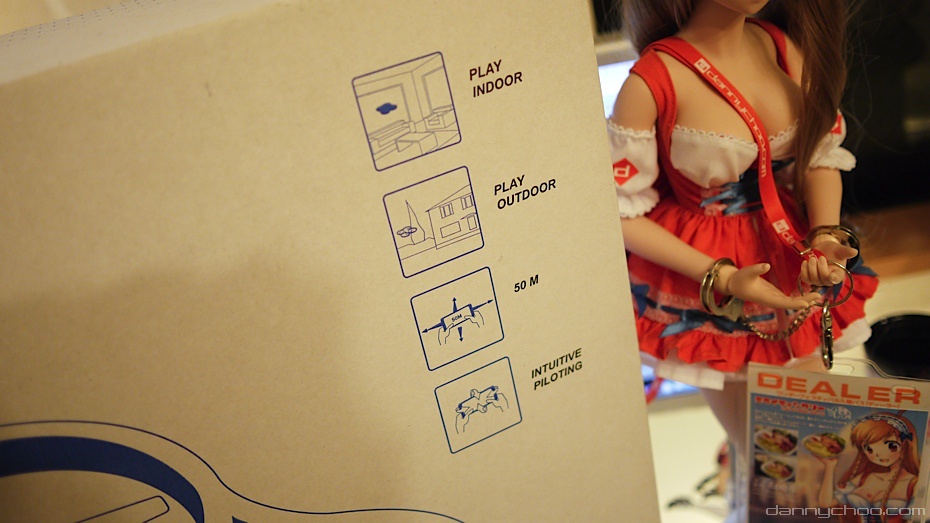 The AR.Drone is controlled over the WIFI built into the drone and can fly up to 50 meters away from the iPhone. 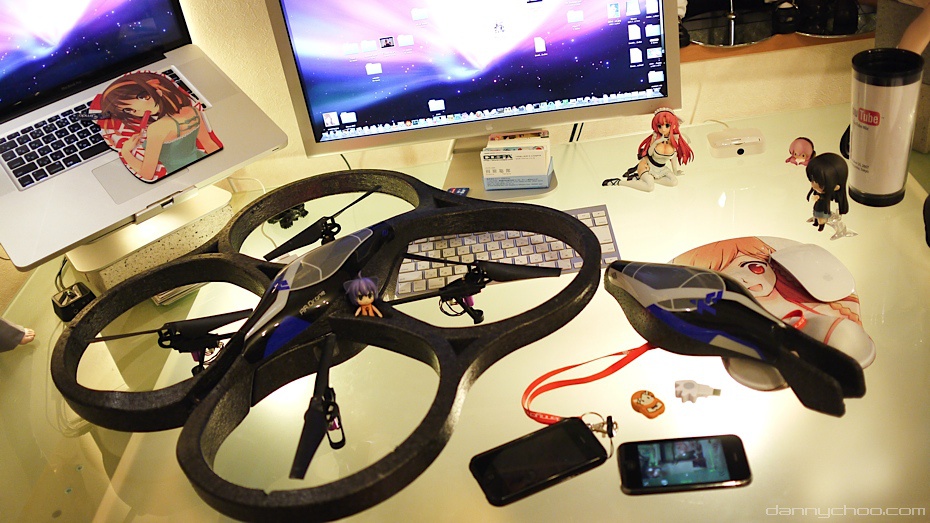 The AR.Drone contains an ARM9 RISC 32 BITS 468MHZ Processor which runs on Linux. 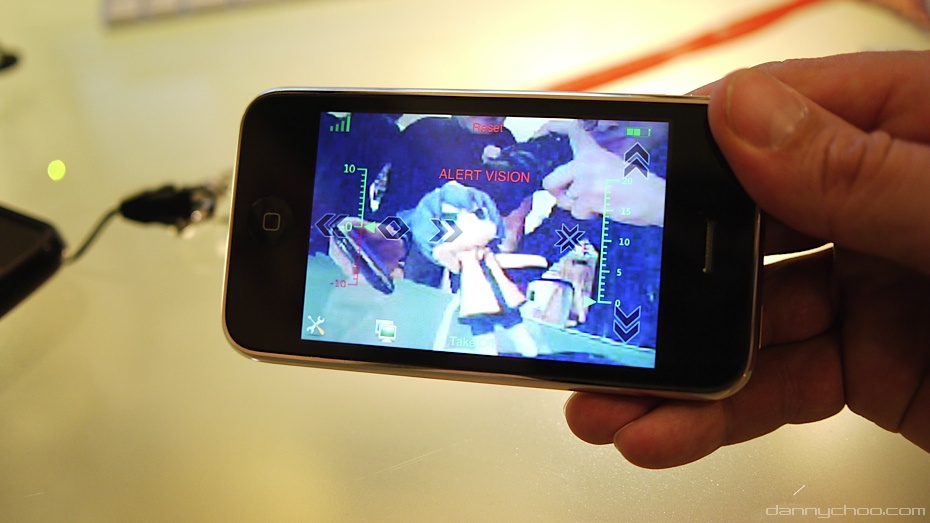 The arrows on the right sends the AR.Drone up or down, arrows on the left rotates left or right and holding down the diamond shape between the left n right arrows while tilting the iPhone controls movement of the drone. 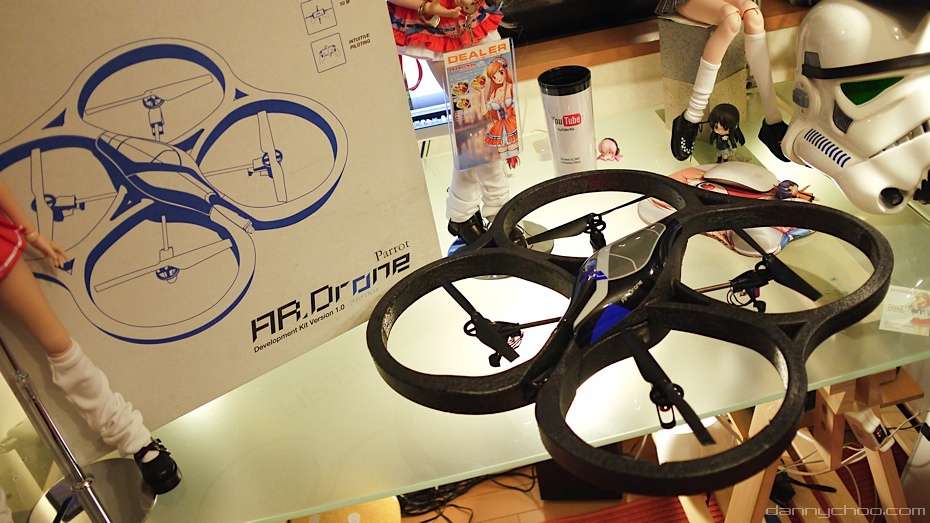 The AR.Drone was designed to be robust - I crashed it into the lights and table and still worked ^^; 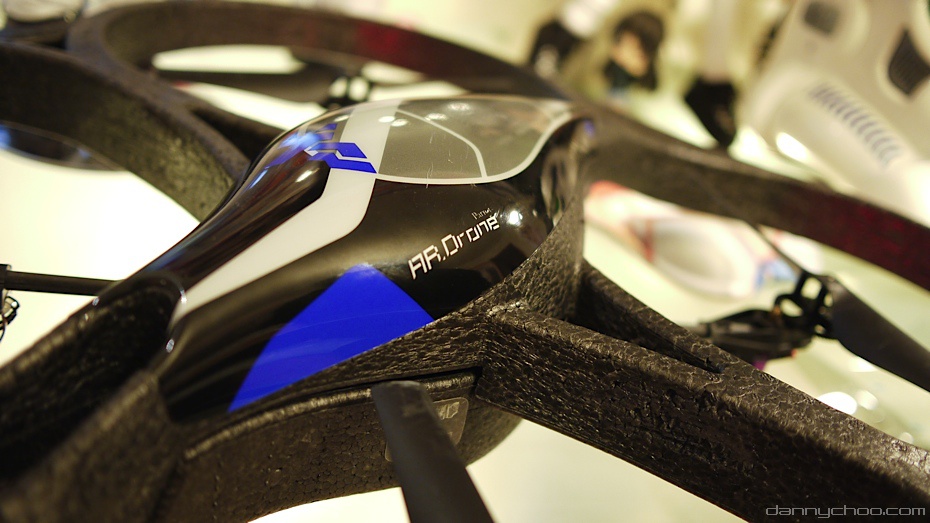 Folks who attend the next Tokyo CGM Night will be able to play with the AR.Drone!

So how about pricing? I reckon between 300 and 500 USD is reasonable. 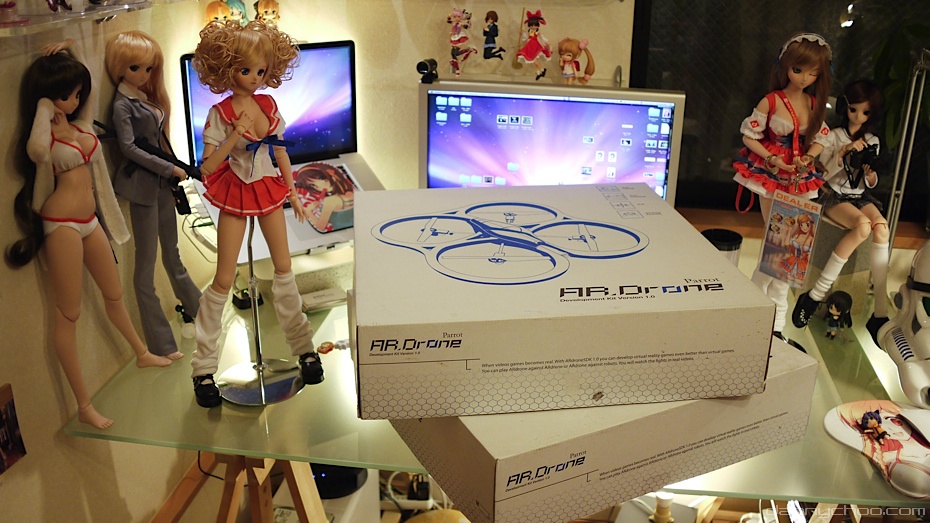 And I lied about only having one... 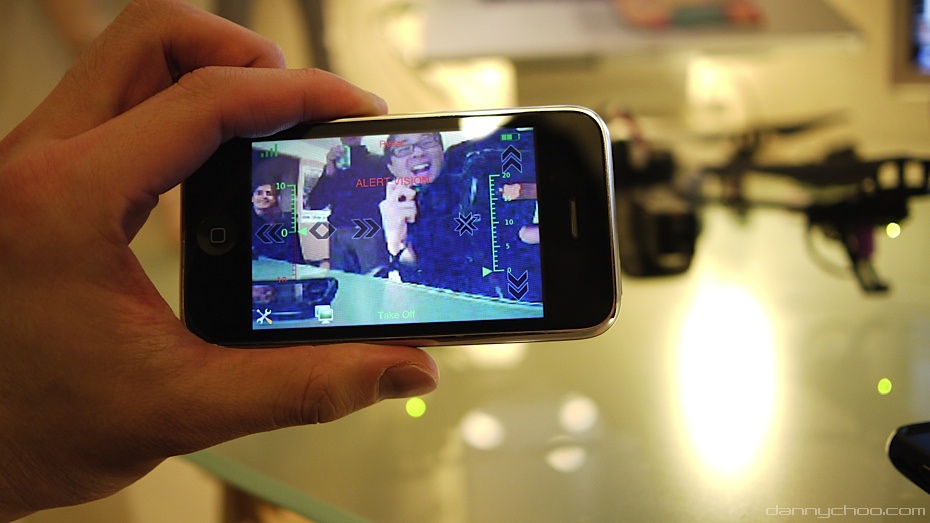 Thanks to James for organizing everything ^o^ 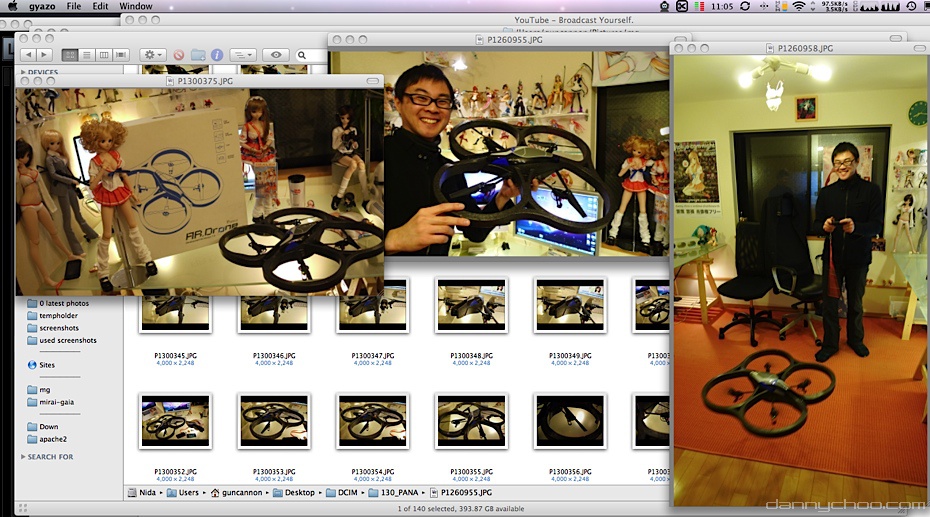 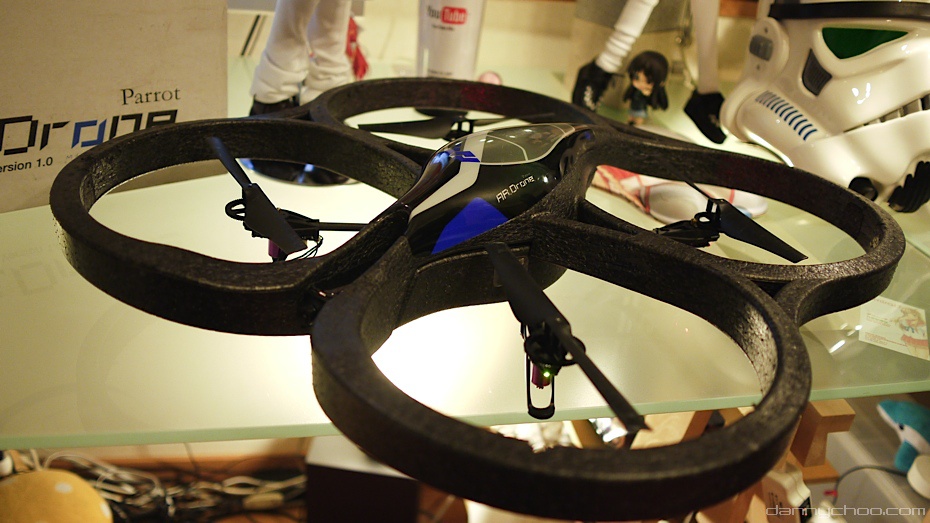 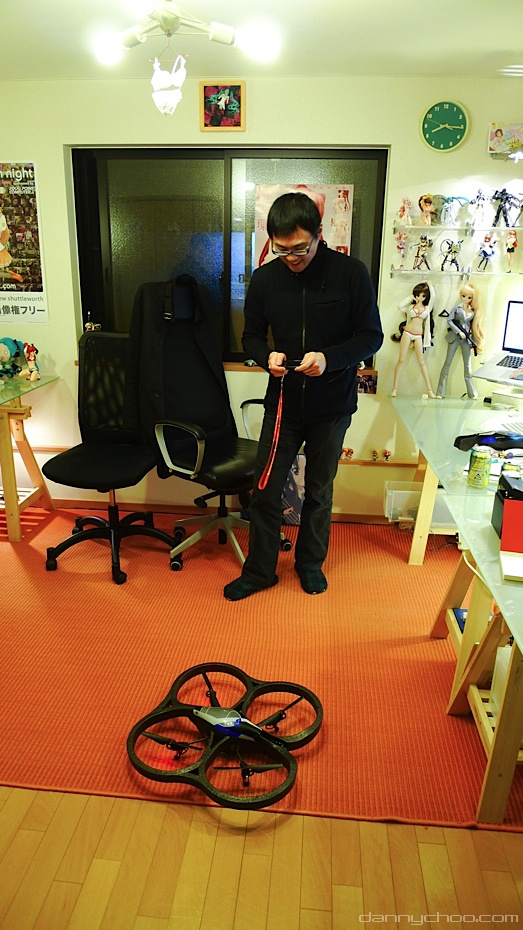 Just noticed holes in my slippers ^^; 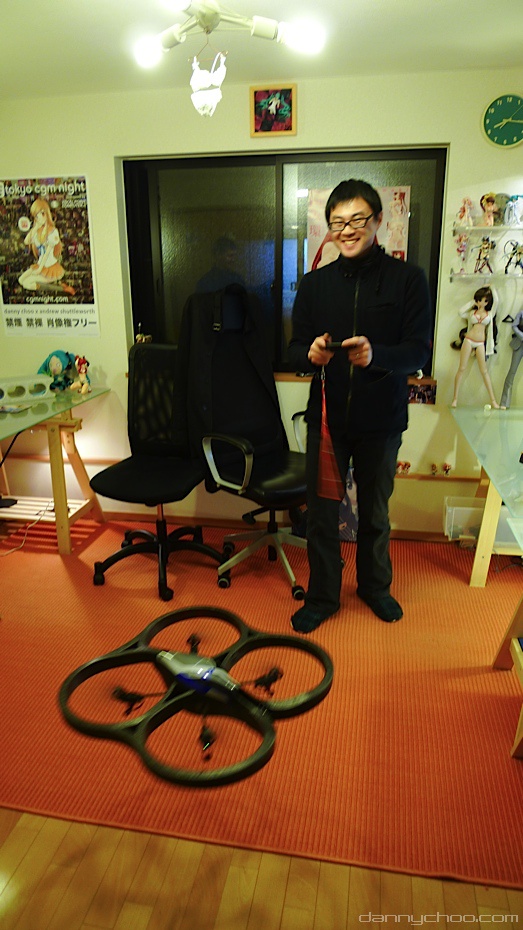 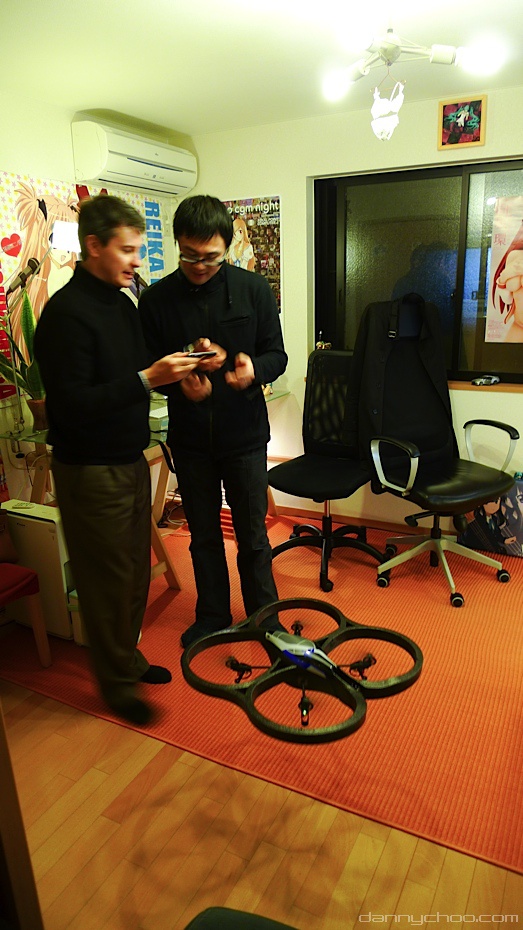 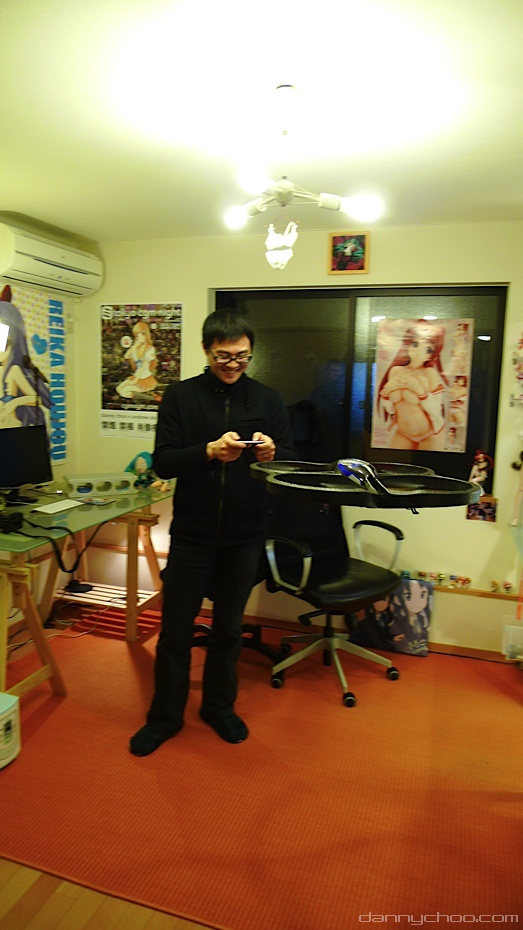 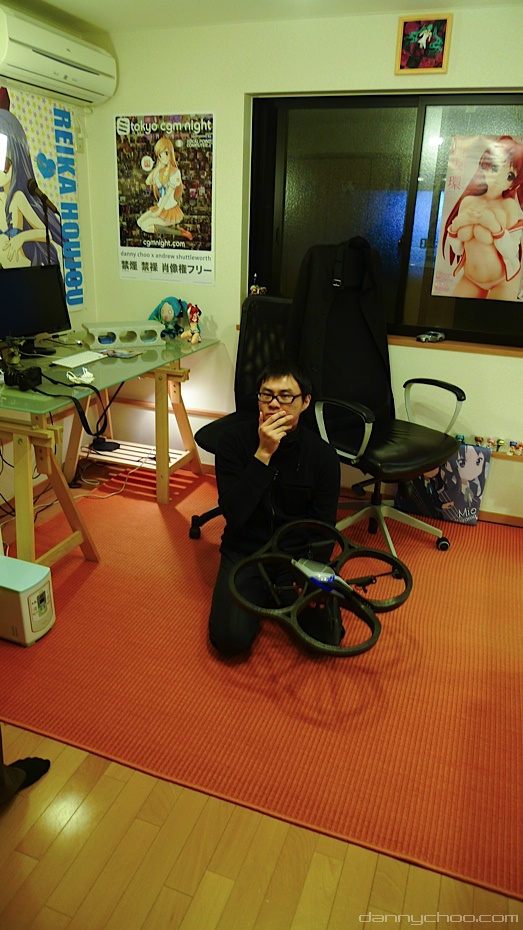