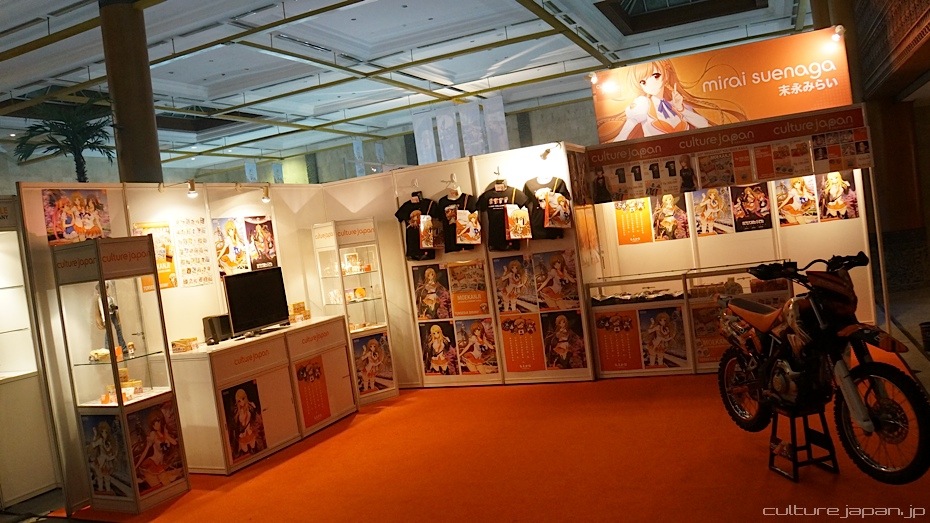 Updated with 2 photos from today at JCC - booth nearly all ready - see you Friday at AFAID! 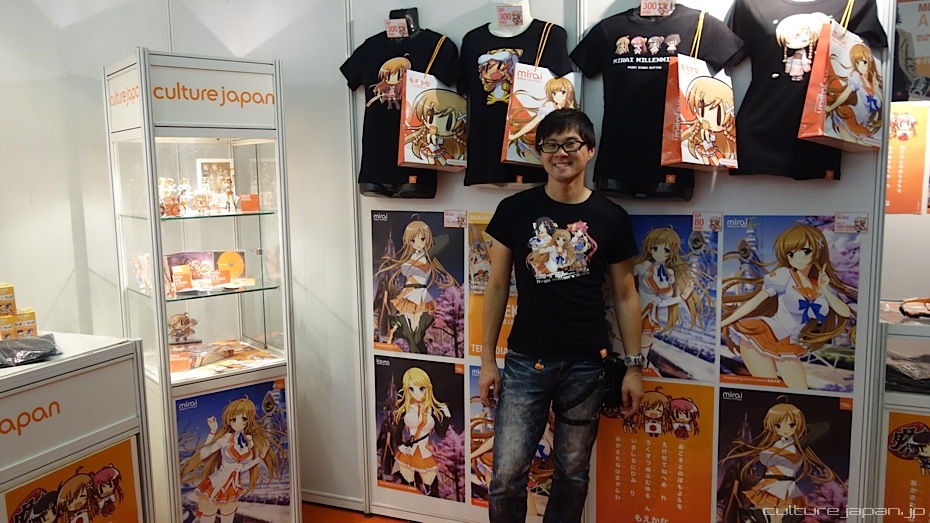 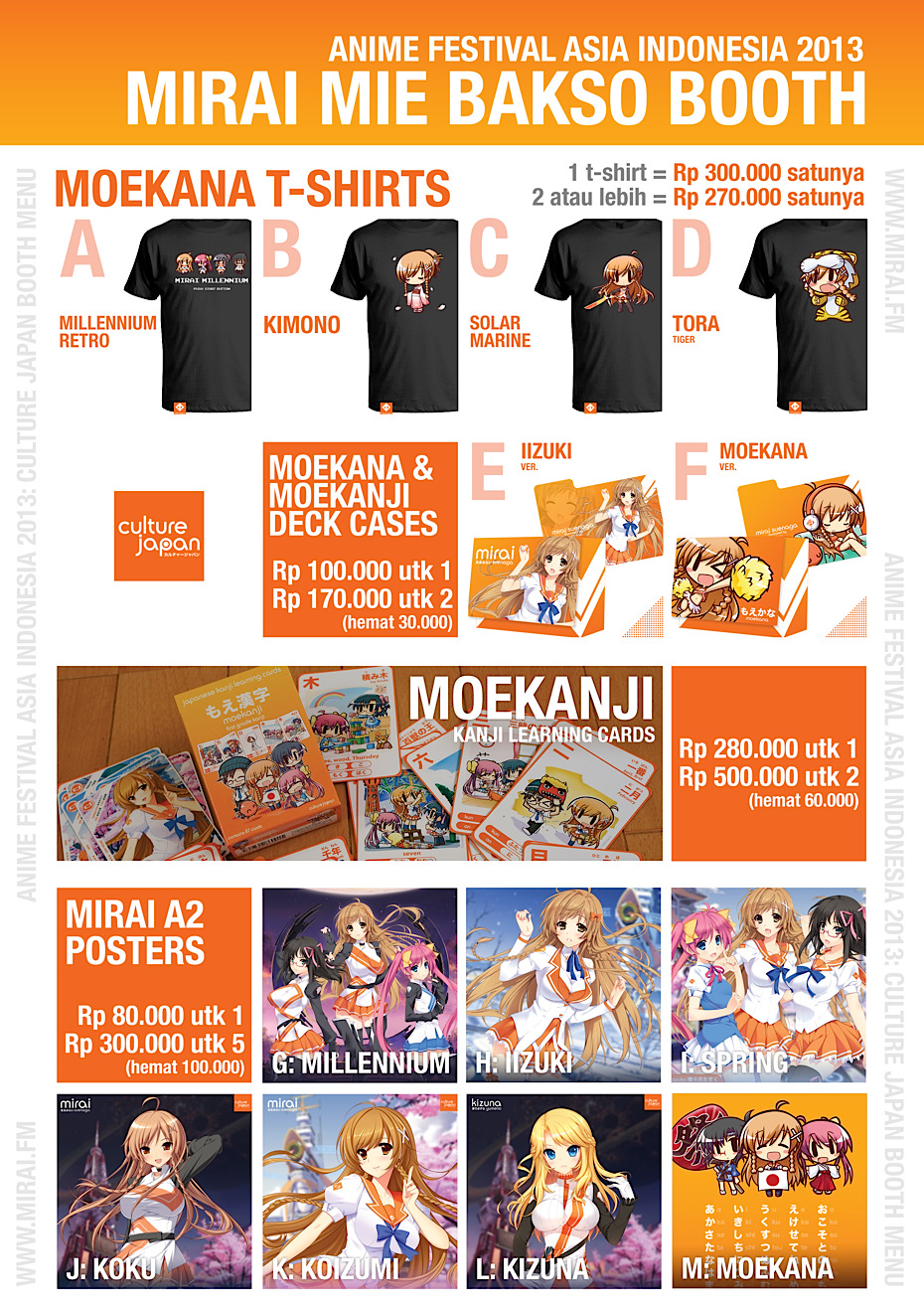 I'll be in Jakarta next week to MC at AFA Indonesia (AFAID) from 7-8 September at Jakarta Convention Centre. Will bring along a load of Mirai Suenaga goodies to sell at the Mirai Mie Bakso booth - this is the full menu ^^

After Animangaki, I had time to make some wheelings n dealings (another word for "shady stuff") and have managed to reduce some of our production costs meaning that we can pass those savings back to our consumers - from AFAID onwards, the multiple purchase discounts are back for all up n coming events worldwide. After AFAID, confirmed so far are AFASG and CF.

The pricing of our products will remain consistent worldwide however and have been so for previous events such as AFASG, CF, Thailand Game Show, Anime Expo and Animangaki. 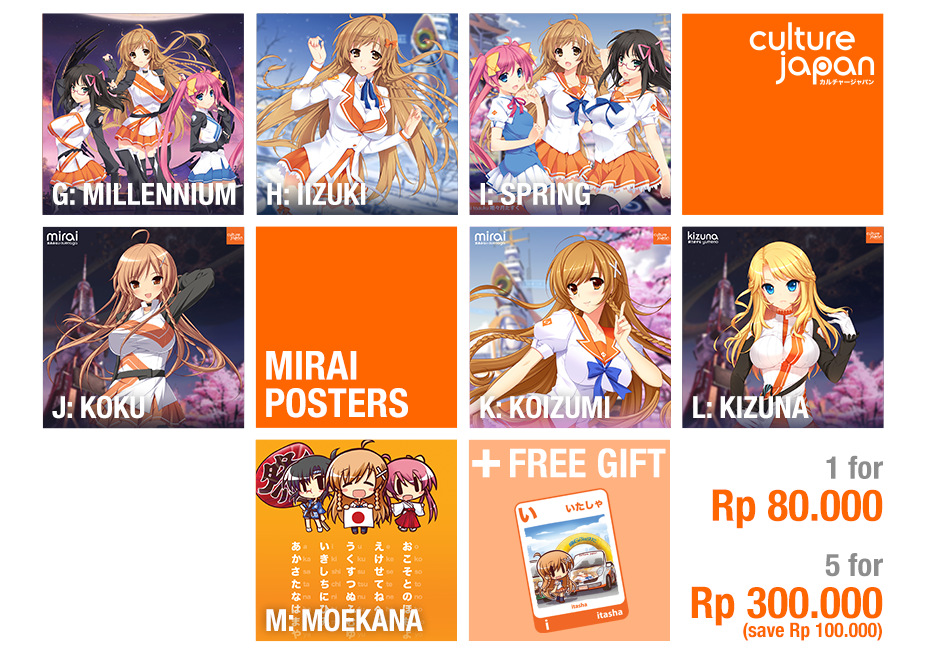 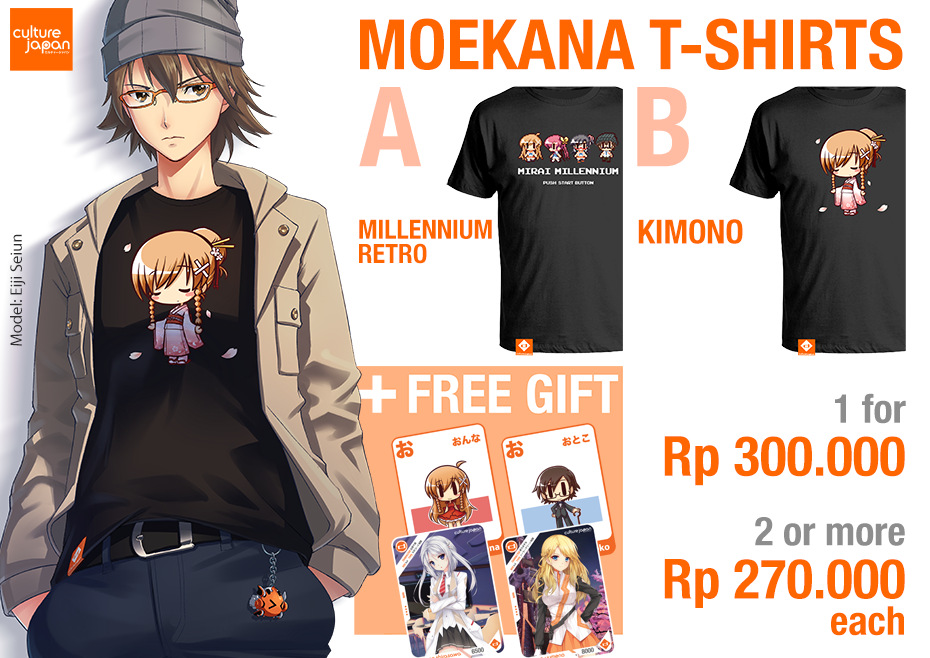 Moekana T-shirts finally in Indonesia! 4 designs available at Rp 300.000 each. 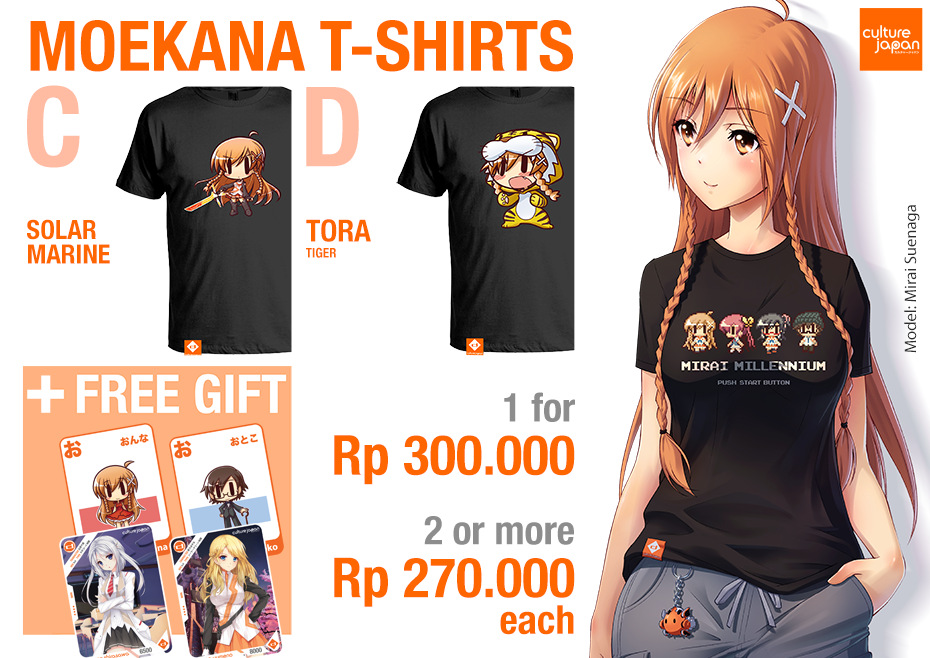 Buy 2 or more shirts and each shirt becomes Rp 30.000 cheaper. If you are planning to buy only 1 shirt, just find another comrade in the queue and buy your shirts together. This forces you to make comrades in the queue so that you can save!
Its easy to make a comrade - just put your hand on his or her shoulder and look them in the eye and say hello.

Remember that these discounts will be available for all up n coming events due to our recent reduction in costs. 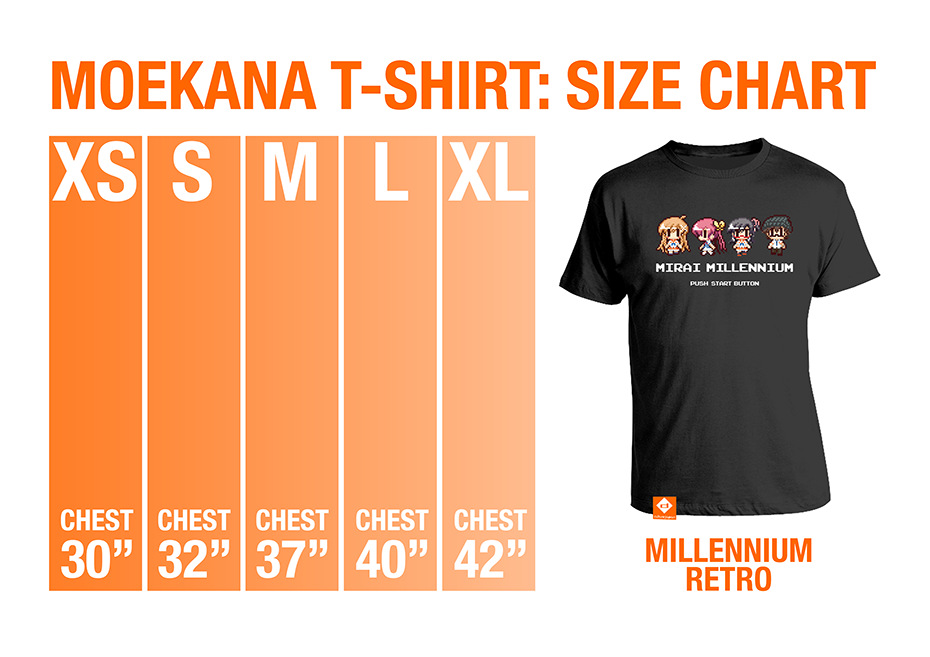 And here is the size chart! 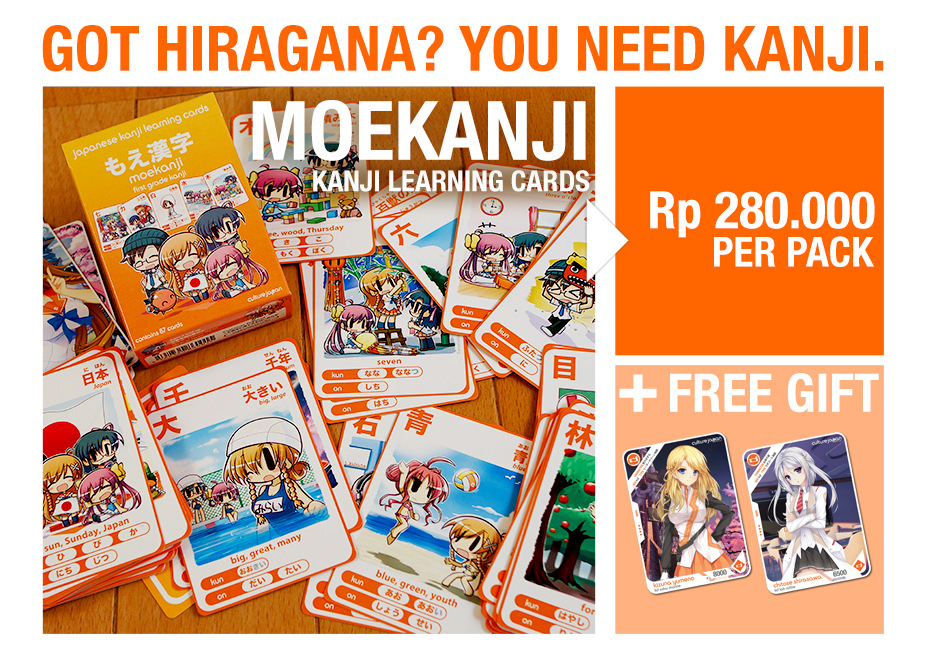 It looks like many Indonesian folks love studying Japanese judging by the amount of Moekana we sold at AFAID last year. This year we will bring Moekanji - the next level of Japanese learning after Moekana. 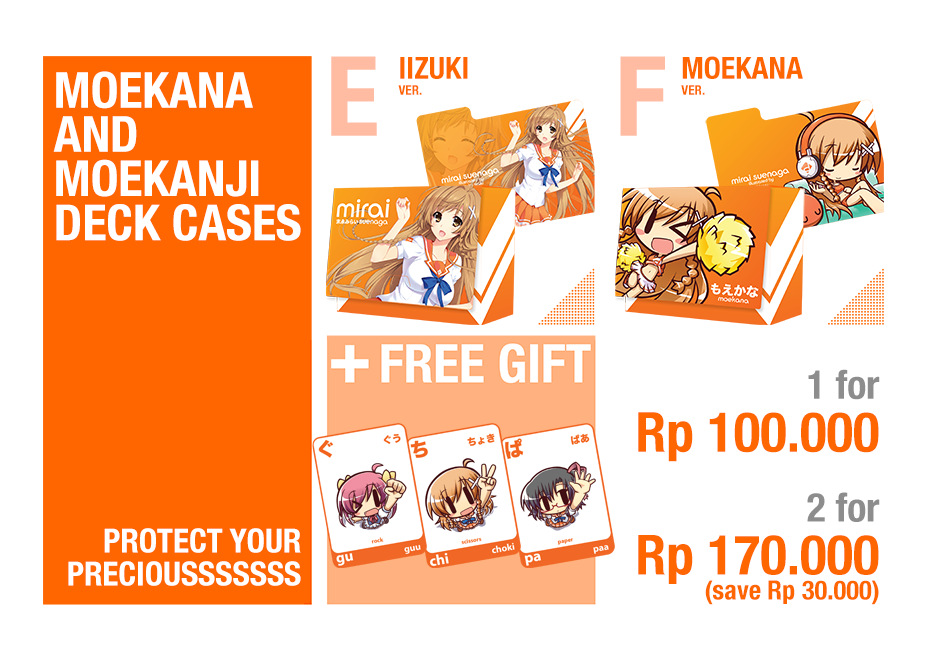 We got the deck cases to protect your precious Moekana and Moekanji cards from your friends pouring Mie Bakso over you. 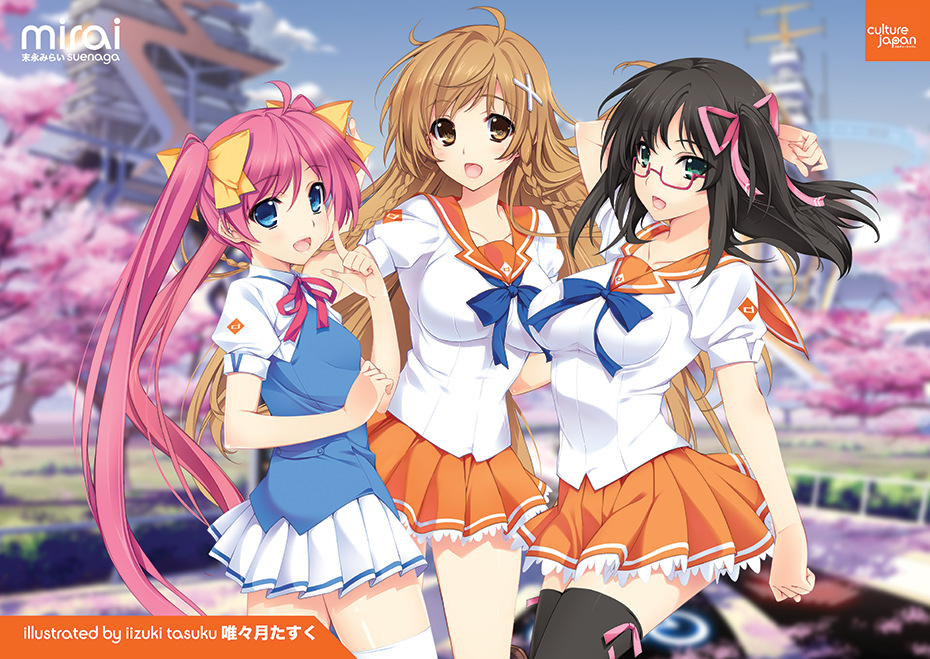 And here are the A2 posters. This one of Mirai Suenaga, Haruka Suenaga, and Kanata Hoshikawa in their summer school uniforms illustrated by Iizuki Tasuku-sensei. 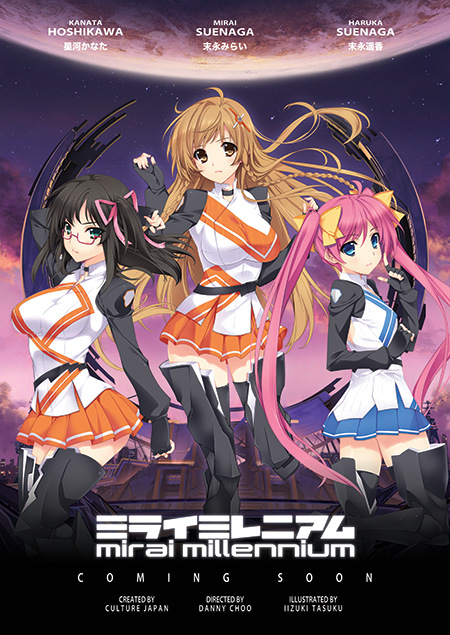 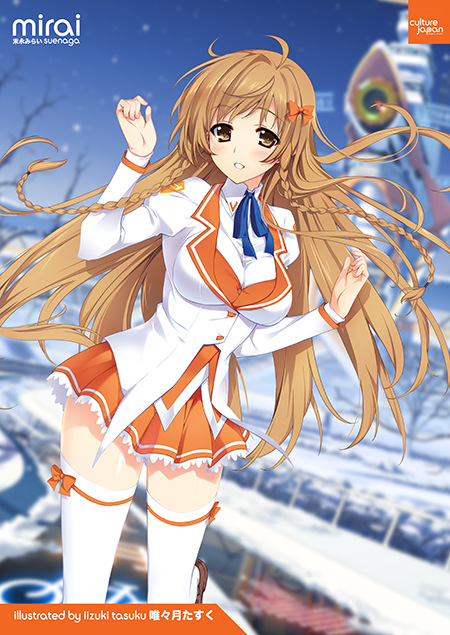 Poster of Mirai Suenaga in her Winter uniform illustrated by Iizuki Tasuku-sensei. 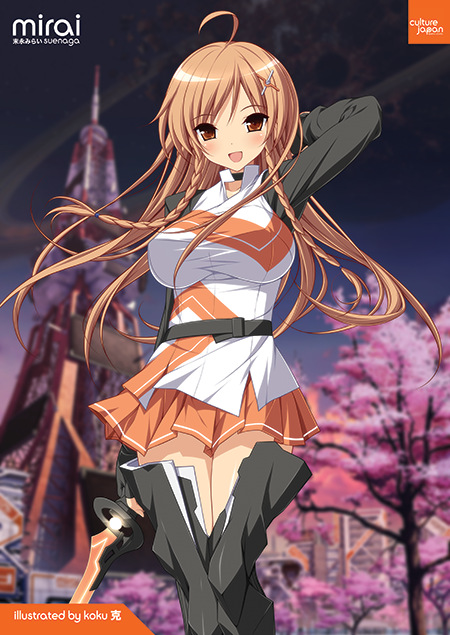 Poster of Mirai Suenaga in her Solar Marine uniform illustrated by Koku-sensei. 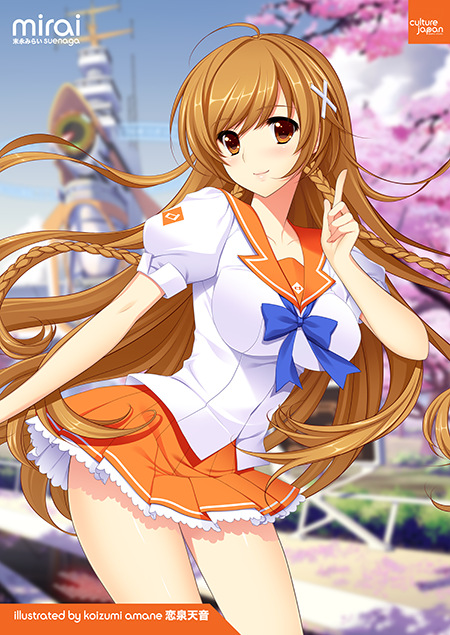 Poster of Mirai-chan in her Summer uniform illustrated by Koizumi Amane-sensei. 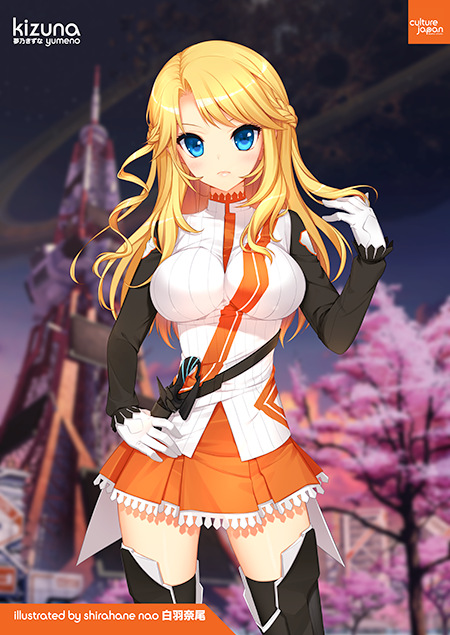 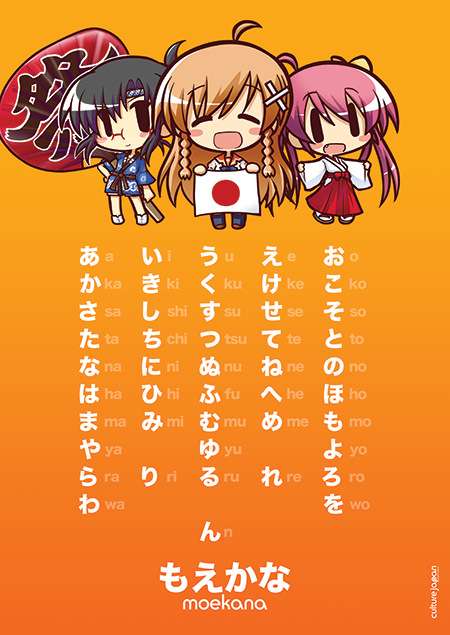 Moekana poster - stick this on your toilet wall so that you can learn while doing mineral deposits - just like I did many moons ago (but I used a Japanese rubbish bag instead ^^;) 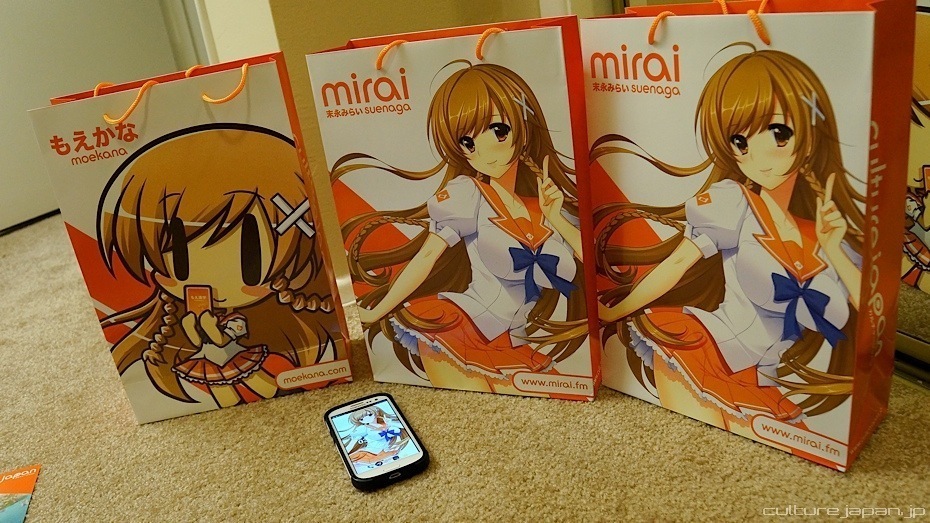 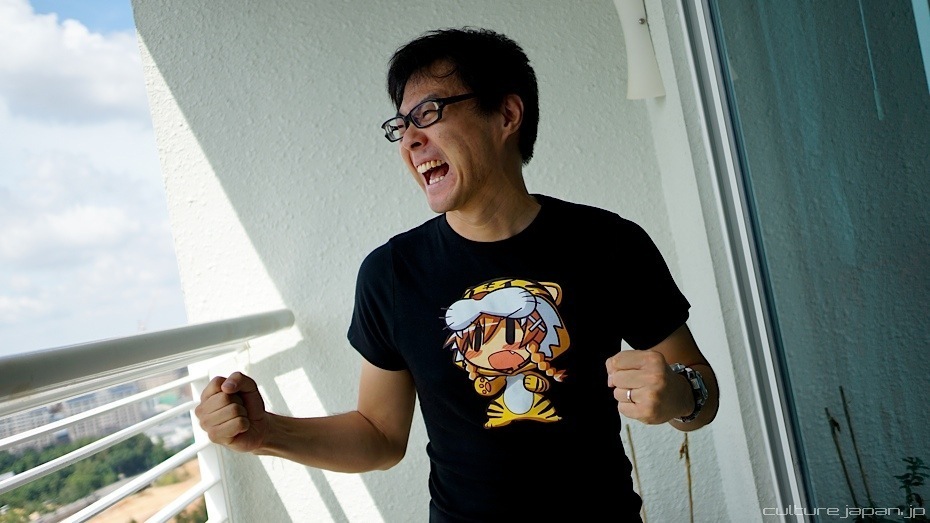 And here is a look at the Moekana T-shirts - Tora! 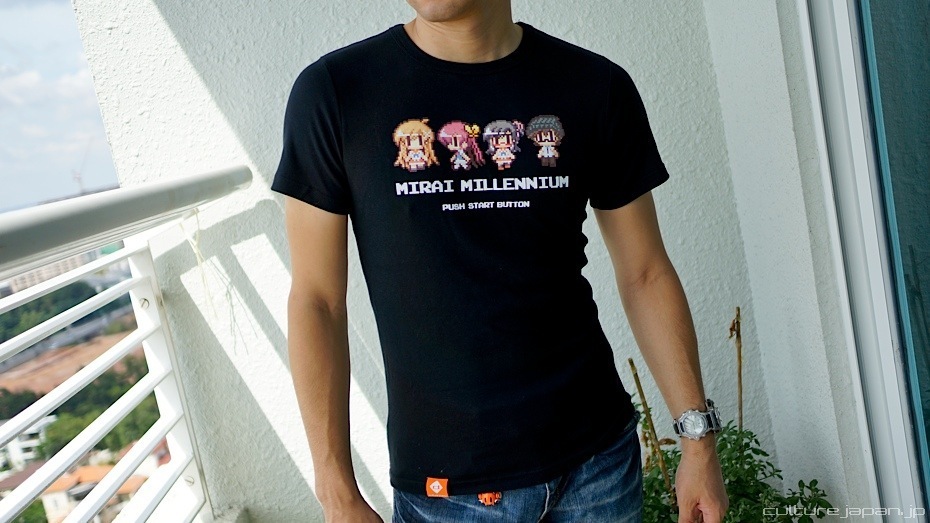 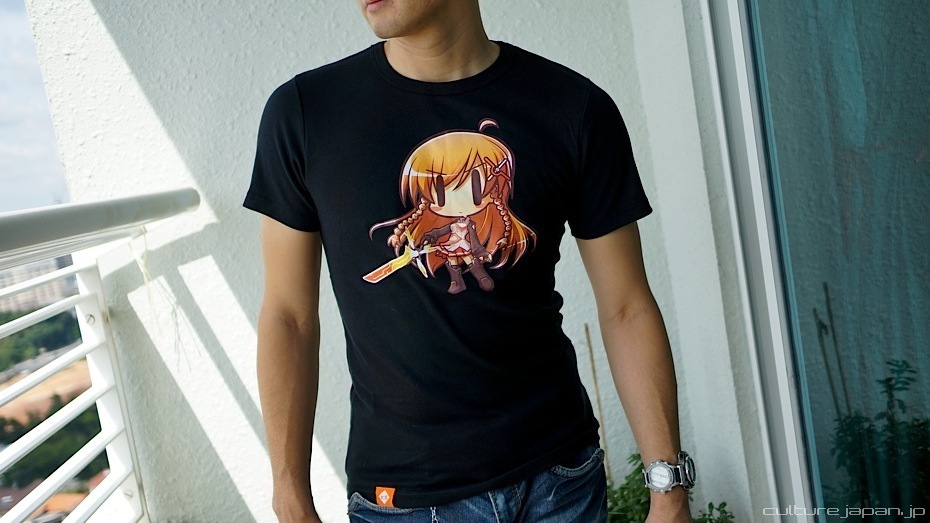 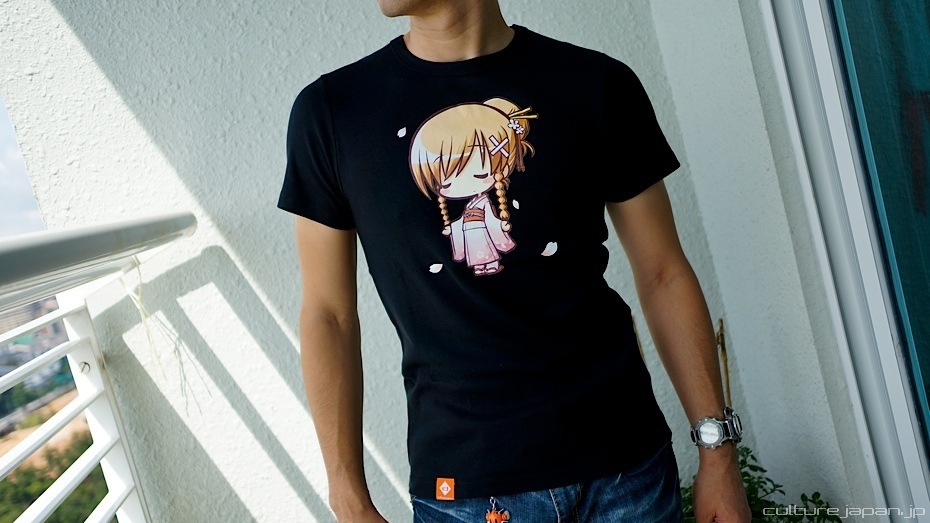 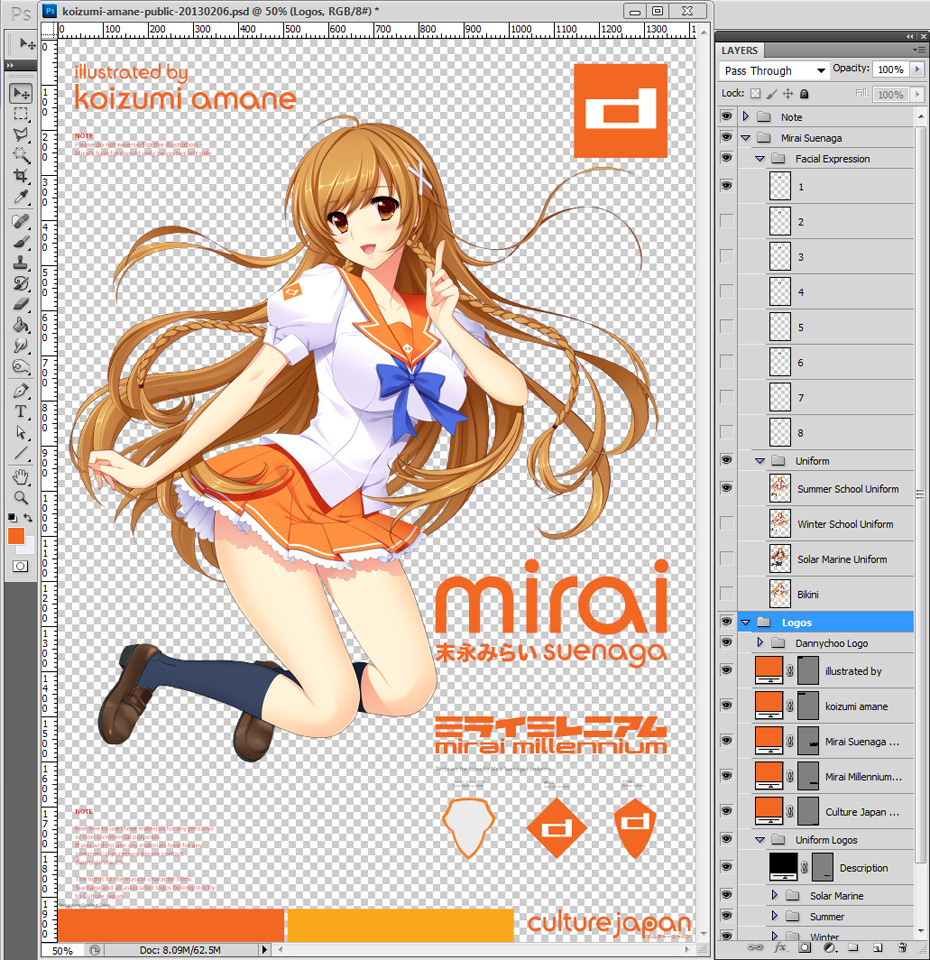 If you cant afford any of our stuff - do remember that you can download the high res Photoshop data and make your own - for your own personal use please! 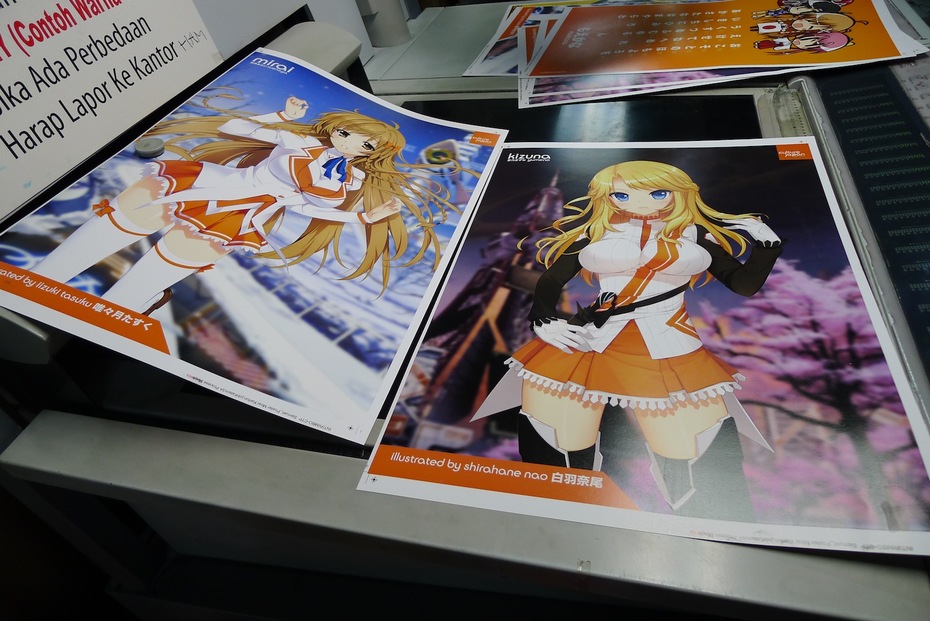 We are doing a lot of production at the moment - the main project is Smart Doll with other stuff such as the T-shirts, Moekana 2nd Edition and now in the middle of making Moekana Mugs and Bags.

I thought we'd take a lookie at how we make posters at an offset printing factory. These posters were made in Indonesia, and will be available at the Mirai Mie Bakso booth at AFA Indonesia. 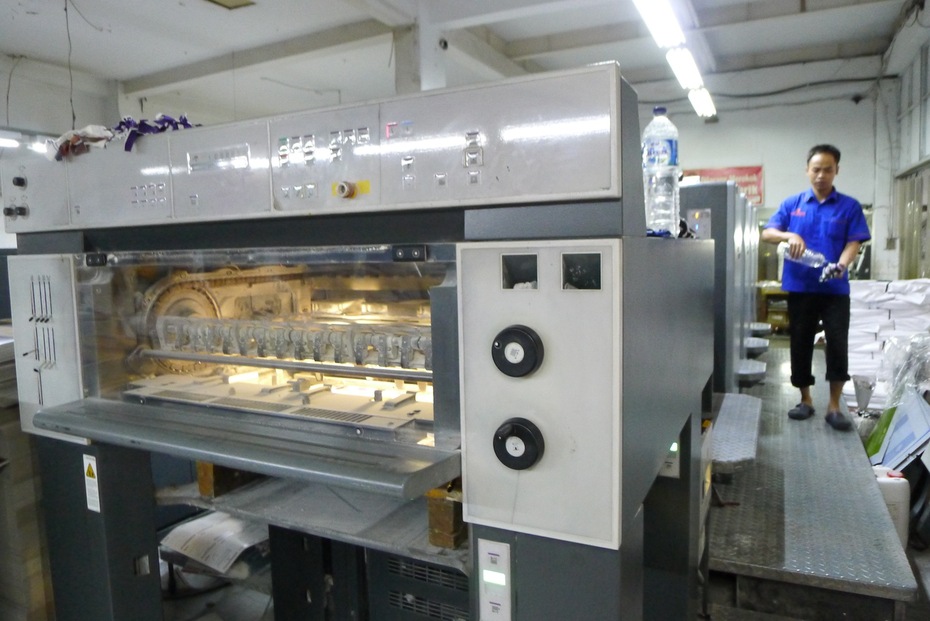 Here's an example of an industry standard offset printer.

Over the past year of making posters, we learnt a lot about poster production and have gradually raised the quality of Mirai Posters from convention to convention. In our first few attempts, we ended up using materials that were not 100% ideal for posters, some were too thick and would curl up along the sides, and others were too thin and tore or got damaged easily. 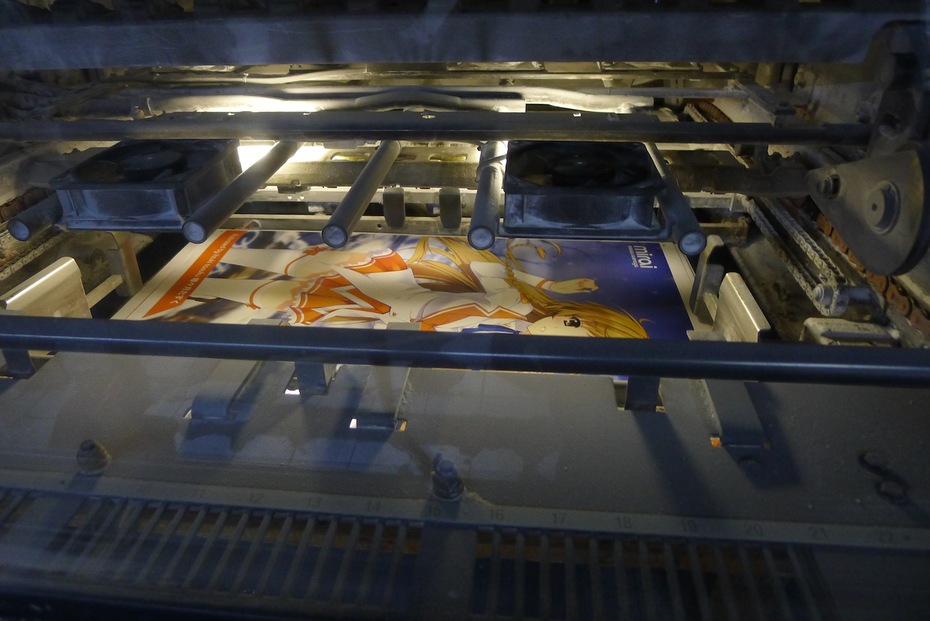 Eventually, we determined that the best material for posters was the 260gsm art card with matte lamination. It costs a wee bit more but feels sturdy and the matte lamination gives it a smooth finish. 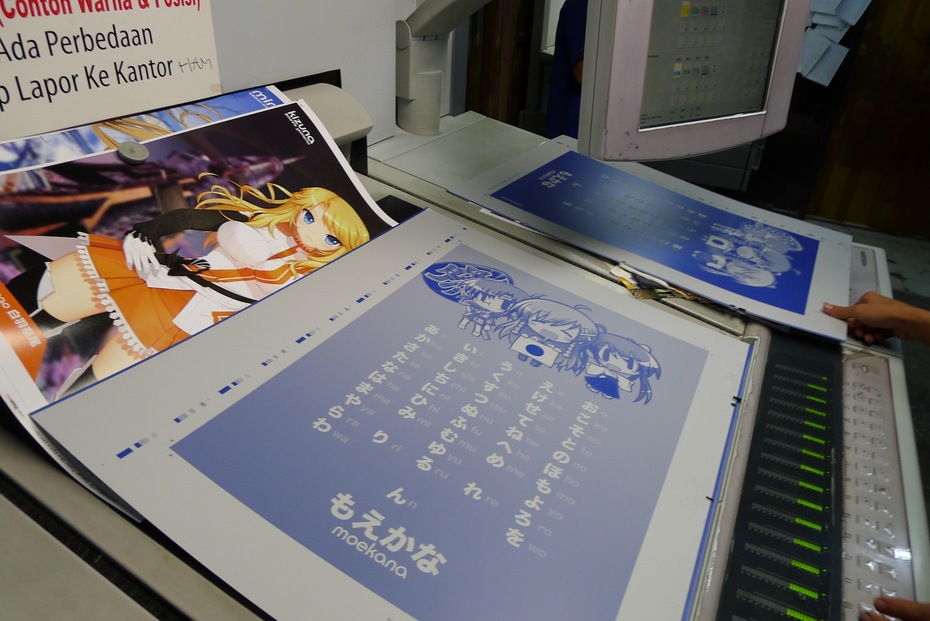 Another thing to take note when making posters is colour. Most offset printers use CMYK colors. While many printers will do colour conversion for you, it's best to convert your data into CMYK mode so you know how the print will look like and not get a big shock if the colours turn out different than you expected.

If you are preparing your data with photoshop, you can do so with Image > Mode > CMYK Color 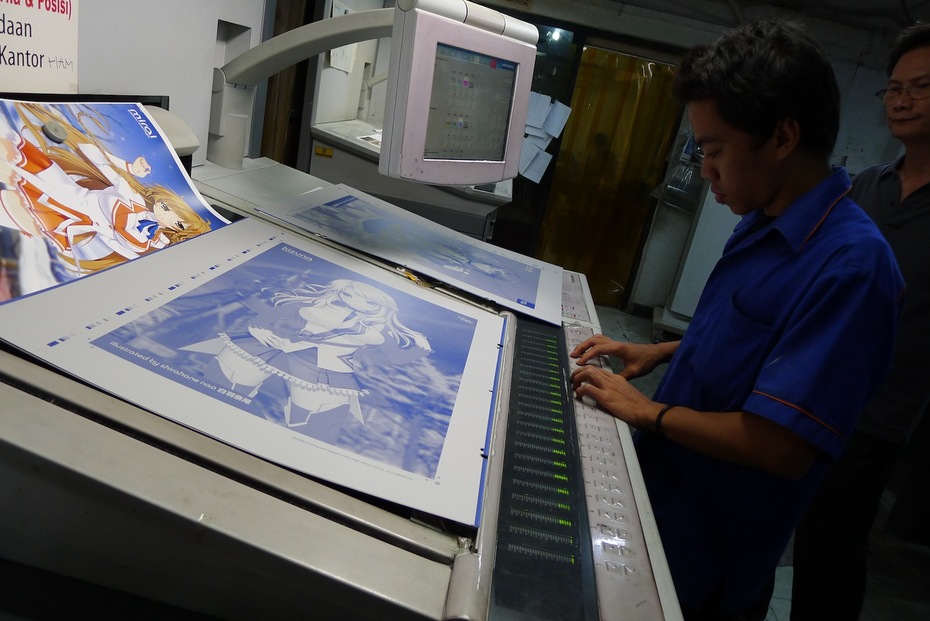 At the factory, our assistant carefully calibrates each color with their spanking brand new machine through the touch screen interface from Heidelberg. This is to ensure that the printed poster matches the digital data as closely as possible. Each design is calibrated several times until the standard is matched. 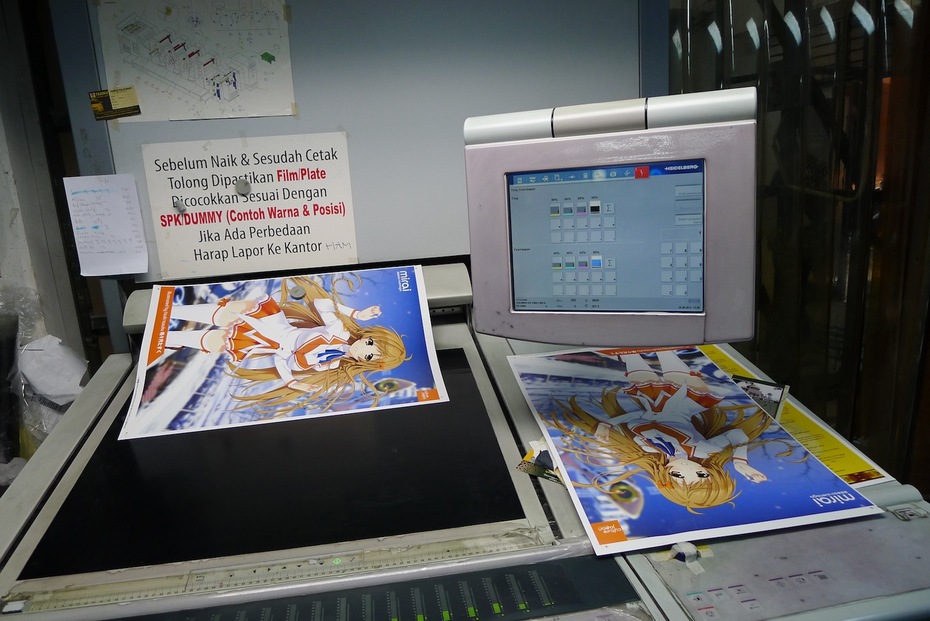 When preparing data for posters, always provide graphic that is slightly larger than the final product. This is called the bleed. This ensures that when the poster is cut into the actual size, you don't end up with white edges in case the knife was not completely accurate.

All the posters at this point also has a white border around them, which is where the cutting template is printed on. 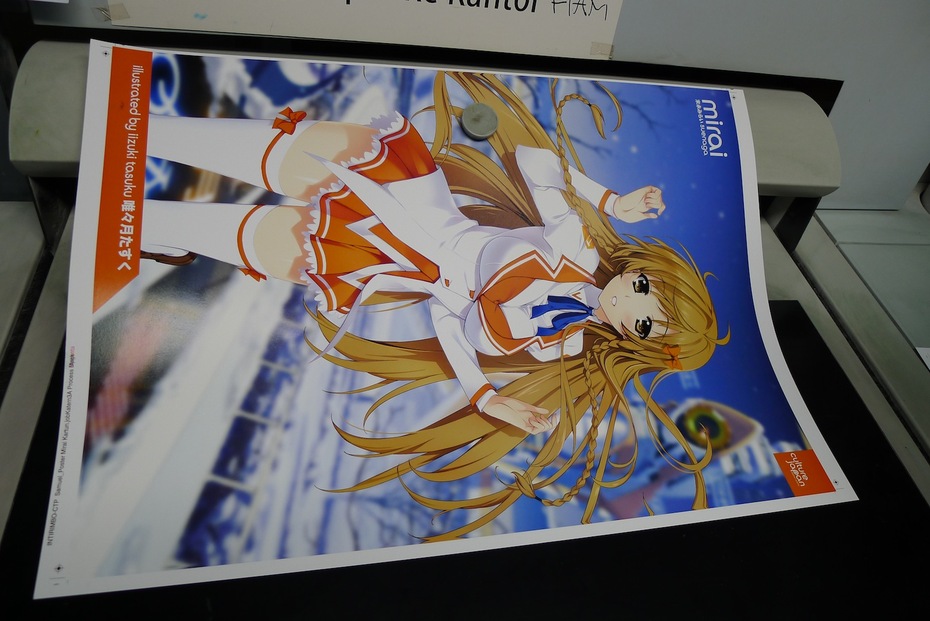 Once the colors are approved, the posters are left to dry for an hour, and then collected in a stack to be cut by a giant knife which can cut 500 posters in one go.

Thats it for now - see you at AFAID soon!